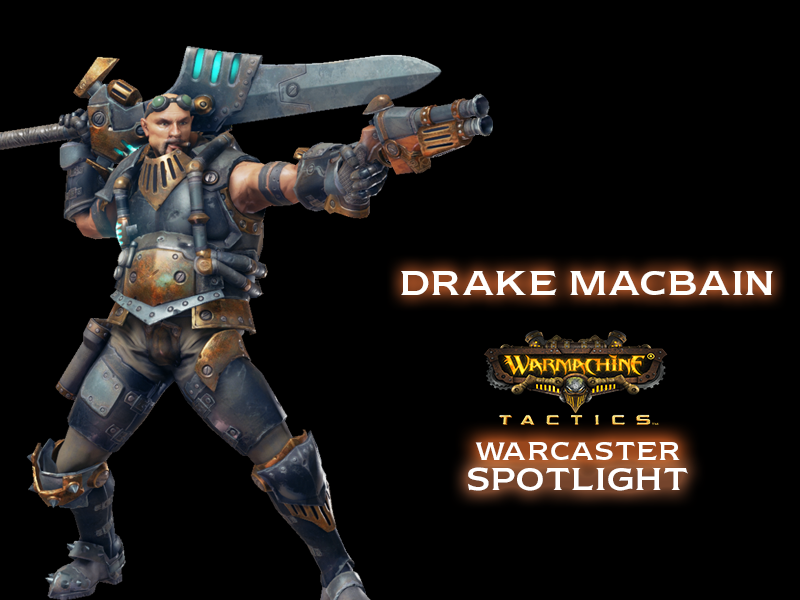 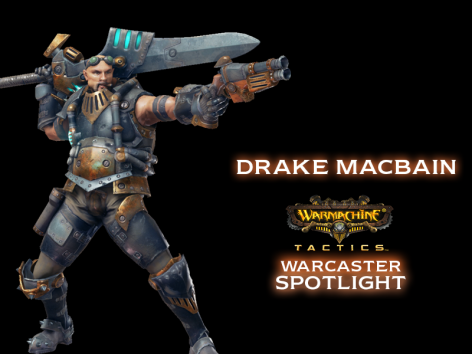 His name is MacBain. Check out the Warcaster Spotlight for Warmachine Tactics!

Drake MacBain is under the microscope for Warmachine Tactics the Videogame from Whitemoon Dreams and Privateer Press! Let see what tips the Devs have for playing one of the baddest Mercs in the Iron Kingdoms.

Background: MacBain is a shrewd combatant willing to use every trick and improvised stratagem he can manage to assure victory. Years at war making do with whatever warjacks and men he can muster have made him an expert in exploiting his enemy’s weaknesses. He has a reputation for being a stickler with contracts and adheres to their particulars with stubborn devotion. When he signs his name to commit to a task, he delivers on that promise, and this reliability has earned him such constant work that he regularly has to turn offers away. Those who fight with him know he truly loves his job and is never happier than when extricating himself from some deadly situation.

Having grown up on the street, and having had no formal training as a Warcaster, MacBain’s selection of abilities might seem like a haphazard combination of random stuff, but, as with most Mercenary Warcasters, they all are worth more than the sum of their parts, and add to the flavor of his character as well.

Abilities and Descriptions: Drake’s mis-matched abilities may seem random, but they all serve one greater purpose: To keep him and his allies fighting as long as possible.

Tough: Drake has a chance of not being killed upon taking fatal damage, if he is not knocked down.

Unyielding: While engaging an enemy unit, Drake has higher Armor.

Energizer: Drake and his battlegroup can immediately move up to three squares.

Jackhammer: One of Drake’s Warjacks can immediately make one normal melee attack.

Rift: 3-cost offensive nuke spell that leaves rough terrain behind for a round.

Failsafe: 3-cost defensive upkeep that targets one of Drake’s Warjacks. While affected, the ‘jack gets boosted armor, and becomes immune to the effects of debuffing enemy upkeep spells.

True Grit: Drake gets to select a number of friendly Faction Warrior units equal to his current Focus stat plus 5. Each of these units will be prevented from dying (as if they had Tough that always triggered, even when knocked down) for one turn.

Undertaker: Drake’s melee weapon, Undertaker, has three advantages. Like all Warcaster weapons, it is magical, with all the benefits that come from it, has Reach, which extends his threat range, and it also has Grievous Wounds, which prevents anyone he hits from being healed or trigger tough.

Differences from the tabletop: Drake’s design hasn’t changed much from the tabletop, but it really didn’t need to. He is designed to keep his allies fighting at maximum capacity for as long as possible, but he can really only do this to a few people at a time. Here’s where Tactics comes in with its smaller unit count. Drake’s feat can in most cases cover the rest of your forces once engagements happen, Countermeasure can possibly shut off entire sections of an opposing squad, and Failsafe can keep your ‘jacks fighting at full strength, no matter what happens to them. This makes Drake a very good ‘caster for beginning players, but at the same times he’s also kind of difficult to master, as a savvy opponent will be able to find holes in your game plan and exploit them.

Suggested Tactics: Drake thrives in Warmachine: Tactics. Fortune makes your attacks way more reliable to hit, Failsafe keeps one of your ‘jacks running at full strength all game, Countermeasure shuts down an entire section of an army’s shooting, and his feat makes most of your dudes unkillable for a turn. Sounds pretty straight forward, right? Not so much.

Fortune has several great uses, and usually getting as much out of it as possible will probably be great. You can do this in several ways, either by casting it on a trio of Warriors, ensuring at least three possible rerolls a turn, or by casting it on a Mangler, which can net you a whole bunch of rerolls when it does a Thresher attack.

A great way to make completely sure that your opponent will not be shooting at you is by casting Countermeasure on a trio of Steelhead Halberdiers, putting True Grit on them, and then either charging or running them up in the middle of the enemy’s army, which will result in a large chunk of your enemy’s guns being rendered useless.

Enemy Warcaster: MacBain, you shot me!