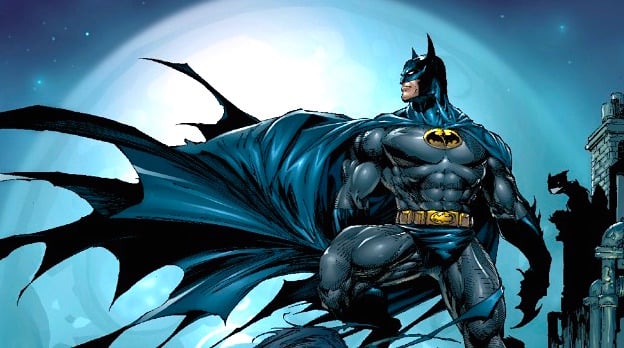 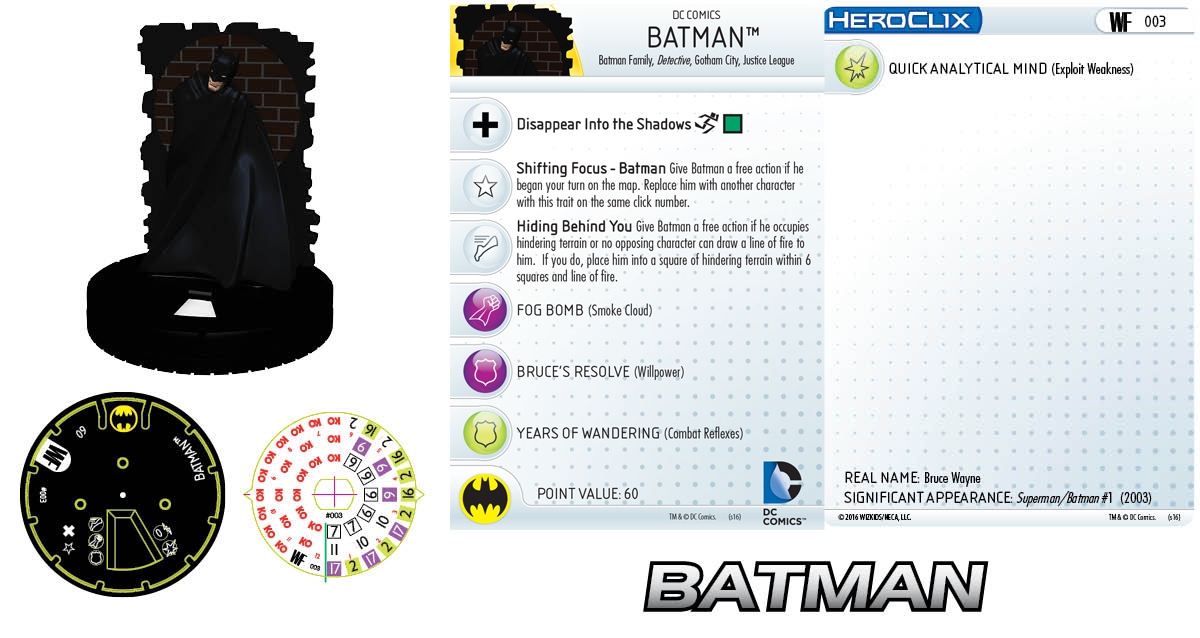 Batman #003 (Common) is the stealthy Batman.  He has the Batman Ally team ability (granting him Stealth) and the Improved Movement ability to ignore hindering terrain.  This Batman also has a speed power for his whole dial called Hiding Behind You, that lets him take a free action if he is in hindering terrain or if no opposing figure is able to draw line of fire to him and place him in a square of hindering within 6 squares and line of fire— a great way to move around the map unseen.  This Batman has 0 range, so he is meant to sneak around and get in close to make use of his Exploit Weakness.  His Willpower will keep him moving until he can find a good position.  Later in his dial, Combat Reflexes will help protect him once he is in close combat and his Smoke Cloud will allow him to place hindering terrain so he can use his Hiding Behind You trait to disappear back into the shadows. 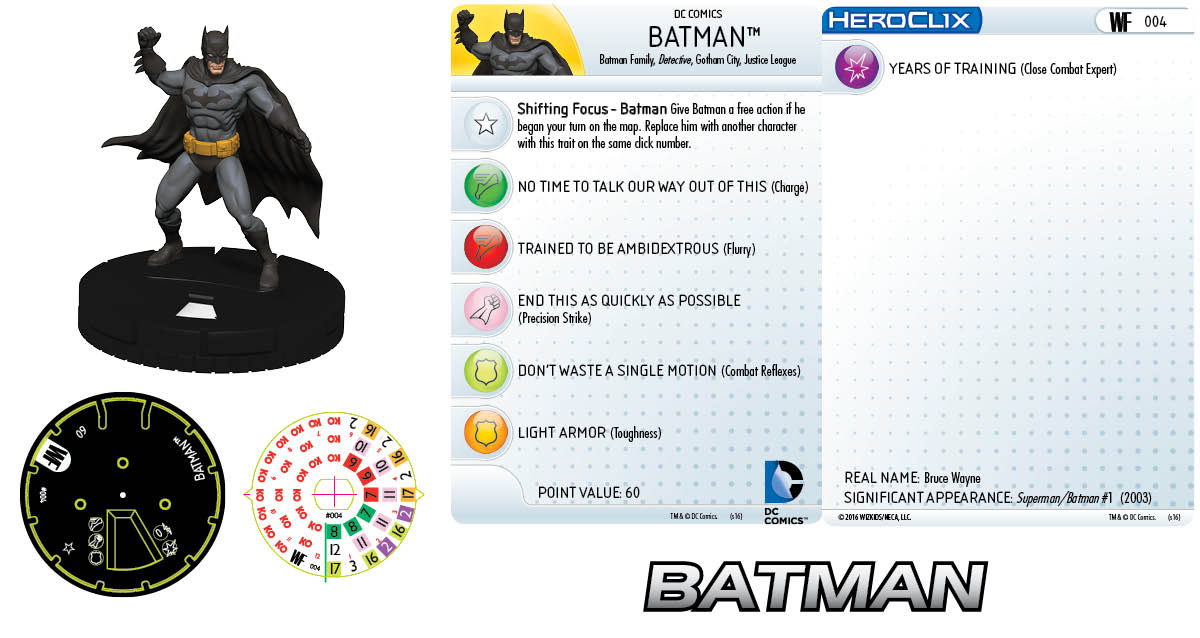 Batman #004 (Common) is the Batman that shows his physical prowess and mastery of all the martial arts.  This Batman ditches the Batman Ally team ability as he brings the battle up close and personal with a potent combination of Charge, a 12 attack, Combat Reflexes with a 17 defense and 3 base damage.  One click in, he gains Precision Strike and Close Combat Expert.  He finishes up with three clicks of Flurry, Precision Strike, and Toughness and an attack value that doesn’t drop below 10.  Early or late dial, this is the Batman who will knuckle his way through the opposing team. 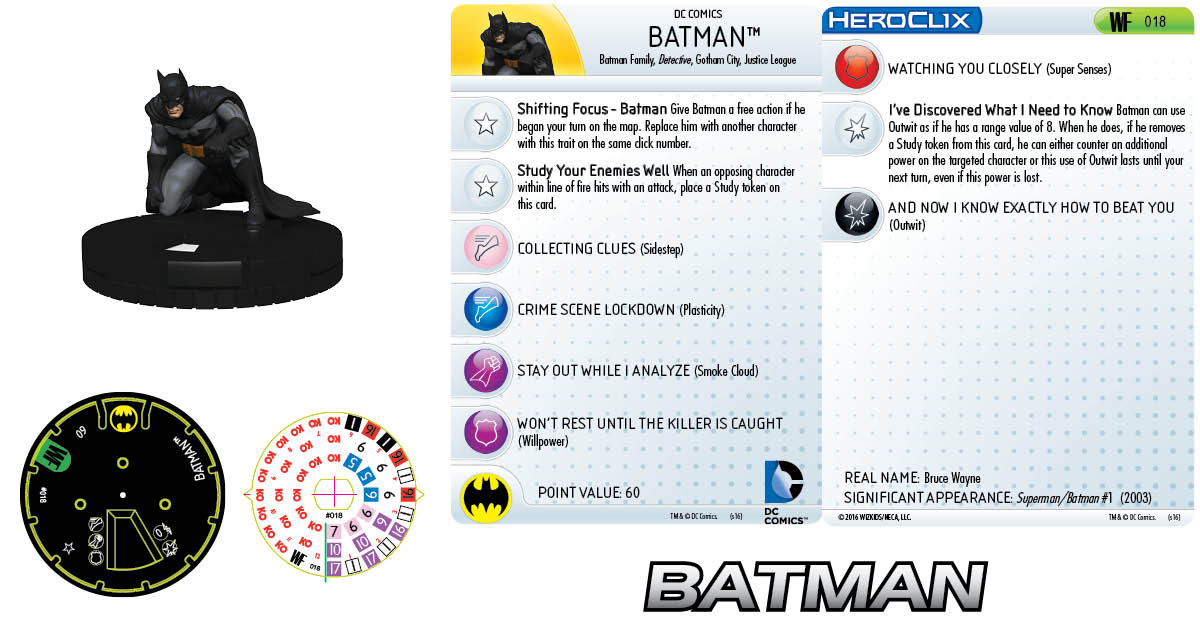 Batman #018 (Uncommon) the Batman figure that shows he is truly the world’s greatest detective.  The Batman Ally team ability appears again on this dial as Batman is secretly collecting clues, observing his opponent and preparing for the right time to strike.  Between his Study Your Enemies Well trait and his special damage power, this Batman can do some very unique things with Outwit and make an opening for himself and his allies.  With Study Your Enemies Well, you place a ‘Study’ token on his card when an opposing character hits with an attack within Batman’s line of fire.  Then, with I’ve Discovered What I Need To Know, he can use Outwit with a range of 8 and if you decide to remove a Study token from his card you can either counter a second power on the target OR that use of Outwit lasts until the next turn even if you lose the power. 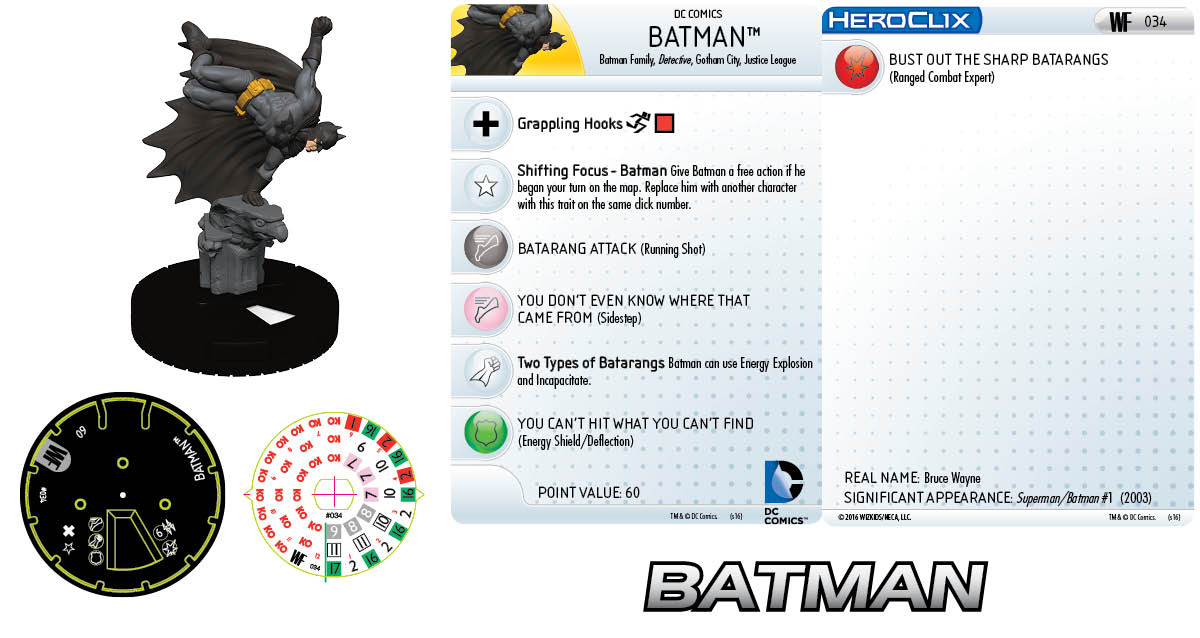 Batman #034 (Rare)  This Batman is equipped for a shoot-out with Running Shot, a 6 range with two targets, an Improved Movement ability that allows him to ignore elevated terrain and Energy Shield/Deflection to help defend against range attacks. He also starts with a special attack power Two Types of Batarangs that allows him use of both Energy Explosion and Incapacitate— giving this Batman the option to hit a cluster of foes at once or tie up larger threats with action tokens.  He finishes out his dial with Sidestep and Ranged Combat Expert.

Author: Larry Vela
Dad, Gamer, Publisher, Pilot, Texan. All games all the time since junior-high. I started BoLS Interactive in 2006. I’m a lifelong tabletop & RPG gaming enthusiast, and internet publisher working to entertain and inform my readers every day. I've been playing RPGs and Tabletop Games since the 1970s. I'm been playing and covering Warhammer and Warhammer 40K for over 35 years.
Advertisement
Batman DC HEROCLIX Marvel-DC DO NOT USE Miniatures Tabletop News WizKids
Advertisement 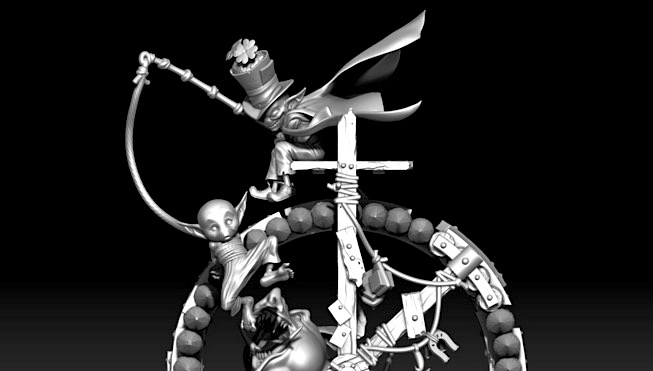