In this article, I’ll talk about the commanders available to the Imperial Navy in Star Wars Armada.

Since this is going to be a Wave 2 article, I’ll talk about these commanders fit into the current meta, what they offer to the fleet, and some common fleet archetypes that go well with the commanders themselves.  Don’t fret Rebel admirals, I’ll be doing a follow-up for the Rebel Alliance very soon. 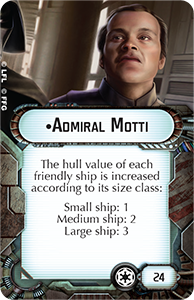 You can practically see the force choke.
Admiral Motti
In my opinion, Admiral Motti is the most cut and dry commander that the Empire has.  If you’re rocking a small boat, you get 1 additional hull, if medium, you get 2, and if you’re packing the ISD, you get 3 additional hull to the ship itself.  This is immediately a force multiplier if you’re taking the bigger ships because the benefit is much more dramatic.  The more big ships you have, the more pressure you can put on your opponent and the more aggressive you can be in your fleet tactics.  This is why most of the ship archetypes more or less center themselves around double ISD builds because you will get the most benefit.  I’ve also seen brutal push-type lists with triple ISD-Is with a few upgrades throwing 45 hull points in your face and essentially running you off the table.  I think overall Motti is a very solid commander for the points you pay for him, and he is almost essential if you’re planning to take a 2-ship list because you’re running a Fireball.  If you absolutely need your ships to survive and don’t need any more tricks, Motti is very reliable.  Just remember that if he is lost (as in his flagship is destroyed), you will immediately lose all your health benefits and your already heavily damaged ships might explode along side him. 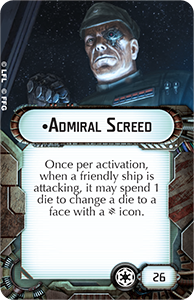 SCREEEEEEED!!!
Admiral Screed
For the longest time, Screed has dominated the Imperial tournament scene.  His ability like many others is fleet-wide, is very consistent, and can guarantee critical effects to trigger.  Simply roll some dice and if you get a blank, just cancel it to turn another dice into a crit.  It’s probably no surprise that he runs most frequently in lists featuring black dice because you will be able to maximize your damage output with the hit/crit result as well as triggering any critical effects that you may have.  With Wave 2 coming in hot, Assault Proton Torpedoes are one of the best ordnance upgrades you can take.  You can essentially put a face-up damage card on any target that’s afflicted, bypassing most common defenses and just giving your opponents a bad day once the face-up cards start piling up.  Overload Pulse is another upgrade that’s practically guaranteed with Screed, and having a target’s defense tokens flipping to exhausted right before Avenger shoots can be absolutely devastating.  Assault Concussion Missiles is still an amazing way to do massive amounts of damage and weakening the effects of Redirect, and you’ll commonly see this deployed on Gladiators and Raiders as a delivery package.  Screed likes to play with black dice so you’ll almost always see a Gladiator with the Demolisher title in his fleet.  Raiders are also excellent torpedo frigates with the APT upgrade.  While Screed himself might be just fine in an ISD-II or I if you’re feeling ballsy, it’s the rest of the fleet that can throw ordnance that really makes him stand out. 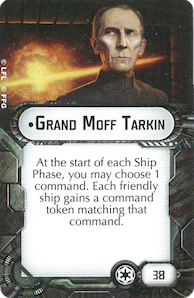 The man, the legend, the Tarkin
Grand Moff Tarkin
Tarkin is simply amazing for the amount of versatility he can offer the fleet, but he’s also very expensive.  At 38 points, he’s the big daddy of the Imperial commanders and for good reason.  He has amazing synergy with virtually every fleet archetype and his ability to grant free tokens to the entire fleet makes him one of the most command-effecient upgrade in the entire game.  For fleets that like to utilize Raiders, you can easily grant nav tokens and use them in conjunction with the dial to change from speed 2 to 4 or vice versa.  For fleets with big engineering numbers, a token is the difference between an extra shield regnerated or having two damage cards repaired per turn.  And honestly, who doesn’t like free re-rolls granted to you by Tarkin’s CF tokens when you’re in the heat of battle?  Tarkin’s synergy is even more apparent when you have upgrades like Engine Techs or Wulff Yularen.  You can trigger the tokens instead of dedicating command dials to activate certain abilities, or just have them recycled indefinitely with Wulff.  While Tarkin is expensive, he offers unmatched effeciency to the entire fleet in terms of command management.  You can easily Concentrate Fire with the dial and have CF tokens instantely granted to you, as well as repairing at above average rates when you need it most.  This amount of flexibility allows you to stack tokens on your entire fleet in the earlier phases of the game where engagement is slow, and the same flexibility allows you to react to battlefield conditions as you play on.  This is why Tarkin is the most expensive Imperial commander, and one of the reasons newer and veteran players enjoy him most. 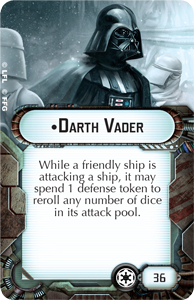 Pure offense, how Sith-like
Darth Vader
Darth Vader is one of those commanders that grants a huge damage buff across the entire fleet.  He is most seen in lists with redundant defense tokens such as ISD and Raiders, but you will also see him with virtually any and all ships.  The ability to re-roll everything is like a fleet-wide Leading Shots upgrade, but you don’t need to spend your own dice to do it.  You simply flip one of your defense tokens and you’re re-rolling anything that you want.  This pretty much means that Vader is one of those commanders that’s more like an upgrade for the entire fleet rather than a commander that adheres to a specific playstyle.  Vader enjoys ships that throw a good amount of dice since his effect will be best put to use there.  However, this can also benefit ships that throw out less dice like Raiders since all you really want to do is garuanatee some hits on dice that might not be as consistent.  That means that you typically want to build around red and black dice ships instead of the blue because the former is more prone to bad rolls.  This means you can also cut out all Ordnance Expert and Leading Shots upgrades from the rest of the fleet because you’re not committed on exchanging defense tokens for global re-rolls.  That’s pretty solid.  Overall, I think Vader will be less played than the other commanders because of the nature of the commander himself.  He pretty much does what other re-roll mechanics already do, but he does it across the entire fleet at a preminum.  What if you don’t need these re-rolls on every ship?  What if you just want to buy one set of Leading Shots or Ordnance Experts, or that your ship will be better off just holding onto CF tokens?  For fleets that don’t really need the re-rolls, Vader is probably better off flying around in this TIE Advanced. 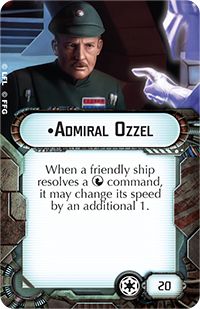 The sleep admiral has awakened
Admiral Ozzel
Last, but certainly not least, we have Admiral Ozzel.  The name of the game when it comes to Ozzel is speed and speed manipulation.  Navigate is arguably the strongest command in the entire game because it allows the player to set up the board to his advantage.  If your ships can’t shoot, or be in position to shoot and shoot well, then they’re just decorations on the table.  Ozzel takes that to the next level because he adds unpredictability to the Navigate command, and this includes dials and tokens alike.  Being able to jump from 2-4 on a Raider or going from 1-3, followed by Engine Techs on a Gladiator is huge.  Likewise, being able to slow from 4-2 for a breakneck right-angle turn to get into an optimal firing position next round is fantastic.  Even the ISD, who can skid around at max range to reduce the amount of return fire that’s being directed towards it can suddenly jump to speed-3 and cut off a Rebel escape.  The amount of movement mechanics you can apply with Ozzel is absolutely fantastic if you’re planning to take a list with large jumps in speed.  Ideally, the more variations you have in speed, the better Ozzel will work out for you because you will be able to burst into action or slow down according to battlefield conditions.  There’s been so many times that charging forwards might seem like a great idea next round, but an unexpected navigate command from my opponent changed it all for me.  Now imagine the same scenario where you can suddenly slow to 1 from 3 with just one nav token, and still being able to repair or concentrate fire on the dial itself.  It’s for this reason that Ozzel been seeing more and more play with Imperial players prefer superior positioning and ambush tactics in their playstyle.  The incredible pricetag of only 20 points makes him the cheapest Imperial commander so far, which seems like a steal considering what he offers to the entire fleet.
~Alright guys, that’s all for me for now.  Stay tuned for the Rebels version!