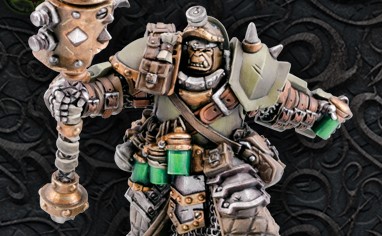 The bounty is out and it is QUAKING! Come take a look at the newest bounty hunter of them all!

This is a new merc/minion solo.  He will work for Cygnar, Khador and Mercs.  He will also work for Circle, Trollbloods, and Skorne.  I guess dragons can’t have all the fun. Sorry Cryx and Legion.

What Does he Do?

Hutchuck is an ogrun with a job.  And he does his job well.  He has similar stats to the bokur RAT/MAT 6 and Def 13.  ARM16 with 8 boxes means he needs a good whack sent his way or he is going to keep on moving.  He has a range 8” gun that has a load of awesome abilities:

Brain Damage:  If you get whacked by this you can’t cast or upkeep spells or aniumus.  Even warbeasts have to watch out.

Quake: Direct hit on enemy model is a knockdown!  Knockdowns are scary and especially ones coming from Hutchuck!

Rust:  Warjacks lose some armor.  That colossal too tanky?  Not when Hutchuck is around!
Wow and that is just his gun!  Hutchuck is loaded some other nasty surprises too:

Take Down: WHAT! The bounty hunter doesn’t take prisoners he takes lives!  RFP is becoming more and more important these days.  Watch out blightbringer, Thagrosh can’t save you from Hutchuck! 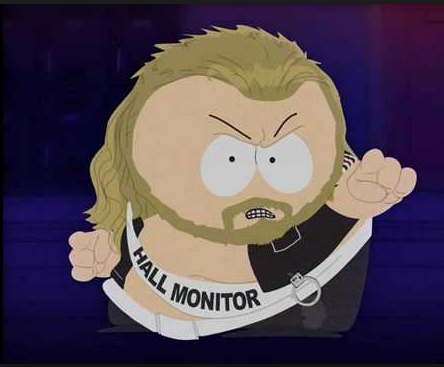 Who Wants the Bounty Hunter?

Hutchuck is a great addition to any list. He is a top tier solo that can cause issues turn 2 and beyond.  Small arms fire will have a touch time taking him down you never know where he might be popping up with Ambush.

Cygnar:  Any snipe caster or deadeye caster.  Increasing the range or accuracy of his grenades will make models and even some casters worried. All 3 haleys can keep Hutchuck safe and going longer with their defensive spells.

Khador:  Sorscha or Zerkova 2 can freeze models making Hutchuck’s grenades on target.  You can shake stationary but you can’t shake Brain Damage.

Mercs: Ossrum has both snipe and Fire for Effect which is both good on the bounty hunter.  The master gunner can give him artillerist and boosted range.

Trolls: Trolls might have a hard time fitting the bounty hunter in since most of their buffs are faction only.  Gunbjorn does have snipe so he might take a fancy.

Skorne:  Rasheth and Hutchuck are a armor nightmare. A collosal could get down to armor 12 if they live the dream with feat/spells/grenades.

What do you think of the new bounty hunter in town BoLS? Please share in your comments below.