40K Editorial: In Defense of Death from the Skies 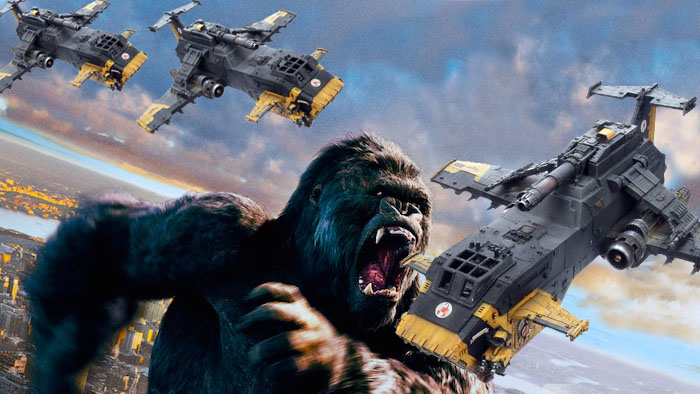 Restore your seats to their upright position – I’m clearing the runway for Death from the Skies. Here’s why the new rules deserve a fair shake.

Restore your seats to their upright position, place all loose articles in the overhead compartment and buckle that barely adequate seat-belt: I’m clearing the runway for Death from the Skies. Even murderers get a defense and I’ll tell ya, this rule set is getting killed out there.

I’m not going to recap the rules changes on this one – if you’re just tuning in – check out this and this for excellent, if not horribly misguided views on things. ; ) <- winky face 😉

Firstly: allow me to be clear – I have an inherent flyer bias. I love them. I own a lot of them (16) … yet they remain deep in my hobby shame closet. Because as is widely known: flyers are not very good and my shame closet is very deep.

But have you heard the good news my friends? There’s hope for the most viscerally nostalgic pew-pew-pew toys in our collections. You’re just going to have to read a ton of bullpoop to find out about it. So I’m going to write a ton more bullpoop and attempt to set the record straight on some things, and to maybe even suggest some ideas on how to stop worrying and love Air Superiority.

The Right Honourable Presidents of 40K and proprietors of Frontline Gaming have raised some salient points about DFS and whether it hurts more than it helps.

Currently the top five reasons to take a flyer all have to do with killing flying hive tyrants. I will accept that this is tough to do when all bomber and attack flyer types can no longer use Skyfire.

Taken in a vacuum, this is indeed a nerf. However, DFS is a complete rule set that attempts to make Flyers more relevant to the game action. This is accomplished by making drastic changes to how they work in the “meta game” (action off the board) as well as on the tabletop itself. This includes the much maligned dogfight phase and Air Superiority rules (as well as the generally well regarded Wing Commander traits, brake turns, and attack patterns which I won’t go into here.)

I agree, the loss of Skyfire is a big blow – if that’s where you stop reading. Keep reading. #itgetsbetter. One of the big knocks against flyers as we knew them was that they were a big point sink for something that couldn’t contribute until turn 2 at the earliest. DFS addresses this by adding a way for them to interact with each other off the board, and by providing army wide bonuses for having them there in the first place. This means flyers are no longer in the penalty box to start the game – they actually add value to a list and can do something while they’re chilling on ice.

IS STUPID/TAKES TOO MUCH TIME/JUST A DUMB GAME OF ROCK PAPER SCISSORS/ OH GREAT MY FLYER GOT SHOT DOWN BEFORE IT COULD DO ANYTHING/THE GAME IS LONG ENOUGH ALREADY/ I’M STILL MAD ABOUT THE PSYCHIC PHASE.

I really think the phrase “new phase” should be preceded by a trigger warning. 40K wasn’t ready for this. Minds have been blown – everyone forgot how to read English. Literal panic has ensued.

As mentioned above, the dogfight phase actually fulfills a much needed purpose – so let’s dispel some misconceptions about it, shall we? It’s actually kind of strange how completely misconstrued this all is.

To summarize: the dogfight phase allows for Flyers to be a more dynamic and involved part of the game – and gives them a turn one impact that did not previously exist outside of a skyshield landing pad. The dogfight phase gives all flyers the chance to shoot at full BS vs another flyer, a chance to react to a flyer before it comes on the table, prevents flyers from “hiding” off the table, and provides the chance to win air superiority if your opponent only brought one flyer.

And finally, the sour grapes about “not even getting to place a model on the table before they are killed” are a bit much. Is it that much more thrilling to get intercepted and shot down immediately after placing your model on the table? Because that can already happen. And it happens like… all the time. We haven’t banned interceptor because of that. Which brings me to…

Air superiority is good for the game. It provides hard counters to traditionally difficult to deal with armies (or can make them even better), it adds a layer of gamesmanship to reserves that doesn’t exist at present, and greater flexibility to make decisions about the timing of reserves by adding or subtracting from reserve rolls.

Air Superiority is such a significant mechanic that it will, more than anything, force players to consider flyers during list construction – you only need to have a single flyer in reserve in order to deny Air Superiority. (thanks to the guys at Heroic Intervention for learning me on this.)

And that is a wonderful thing because list building is a zero sum game. Taking one thing means not taking another. It means different things, but not more things.  A popular podcaster even claimed recently to be considering a couple Stormtalons rather than his usual Librarius Conclave. Of course, that idea sounds insane, but if that wouldn’t be good for the game then my name isn’t actually Val Heffelfinger.

The Forge World problem is … actually a problem. Forge World flyers are simply unsupported right now. DFS is cool in many ways but it is not backwards compatible. Simply using the old rules for Forge World and DFS for the GW flyers is not an option.

There are two ways forward: don’t use DFS until the rule set is complete, or, apply a vanilla temporary solution. As you can tell if you’ve slogged this far, I’m pro DFS. By no means do I think it’s the best flyer rule set we could have dreamed of, but there’s enough salt already out there if you found my points to be bland. My feeling is actually that DFS is benign enough, but still interesting enough, to warrant inclusion. It is by no means worthy of the incredible backlash easily found across the internet. I actually find the reaction pretty confusing. #welcometotheinternet I guess.

I’ll remind my gentle readers of the middle tables – not everyone is rolling with double stormsurges and deathstars or even just regular old optimized lists. Some people would like to use these rules, and it’s not going to hurt the hyper competitive folks if they do. And who knows – maybe we’ll even see flyers being used in concert with reserves manipulation to make Grey Knights great again.

So I propose two options:

A.    Don’t use any of the book for ITC tournament play. Wait for 7.5 or 8th or whatever and let the chips fall at that point.

B.    Take advantage of DFS in all of its flyergasmic glory with the following stipulations “for the ease of tournament play.” ; ) <- winky face.

1)     Attack Flyers retain Skyfire but have a -1 penalty to their Ballistic Skill when shooting Air Targets.

This maintains the spirit of the DFS rules change, while not being overwhelmingly punitive. It also mirrors how fighters work and seems to be the painfully obvious solution to the number one complaint about DFS.

2)     The dogfight phase should be used. It’s not anything more complicated or onerous than a lot of codex based silliness. It has a purpose, and the rule set is incomplete without it.

3)     We adopt “vanilla” stats for all Forge World flyers that do not share a GW chassis until an update is provided. (IE – Storm Ravens, Vendettas etc will use the DFS stats of their closest counterpart)

Fighter, Attack, and Bomber types will be assigned to the remaining unique flyers based on how the codex flyers got slotted in DFS. The Presidents and T.Os are free to use discretion as always.

And that’s that! I hope if you’ve gotten this far that I might have added something to the conversation. And just so we don’t “get it twisted” – anyone who uses the handle Val Heffelfinger has his tongue firmly in cheek.