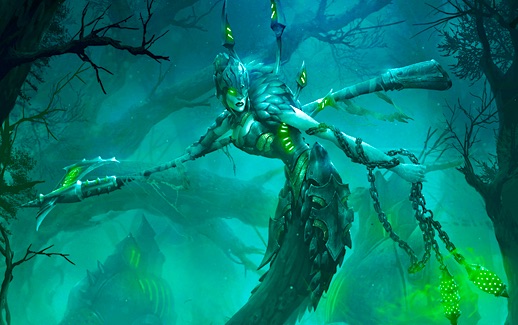 With all the amazing minds in play here at Privateer Press, our creative process can take a few different paths. Sometimes, we gather together via email like a virtual cabal and collectively conjure forth a brief for the concept artist. And other times, WARMACHINE creator Matt Wilson says, “Don’t worry about the Cryx warcaster—I know what I want,” and a week later, Bane Witch Agathia concept art materializes in my inbox. We had a few head designs to choose from, so between Matt, Art Director Mike Vaillancourt, and me, we quickly chose version A. At that point, Agathia was ready for both illustration and sculpting to begin.

The first round of sketches from artist Néstor Ossandón didn’t quite capture the feel we were looking for. Mike and I wanted a bit more of a dynamic pose for Agathia, so I requested a pair of deathrippers in the background since she is headlining our new Cryx battlegroup box. Following a quick draw-over from Mike, we had a solid direction for Néstor to move forward with. Mike and Néstor continued their dialog, and through this collaborative effort, the Bane Witch art took form.

In the end, the collaboration resulted in this beautifully eerie illustration. At the same time the illustration was happening, sculptor Doug Hamilton got hold of the concept art and got to do his thing…

Early last year, I was looking through our new concept art, searching for potential projects and seeing what the future might hold. I had heard that Matt Wilson was doing a few new pieces of concept art, and I was interested to see what the wily creator of WARMACHINE had up his sleeve. When I came upon Bane Witch Agathia, I knew I had found a future project of my own.

I planted the seed early on by emailing Matt to tell him how cool I thought Agathia was (kissing up is an art form, too, you know), and we went on to trade emails on a few other projects we were both working on. In the end, it was hard for Studio Director Ron Kruzie to not say yes when I asked for this new warcaster.

In the end, she was mine.

The thing that caught my attention was how Bane Witch Agathia is a beautiful creature—her facial features are very crisp and, under that bane-styled helm, is an attractive person—yet she is also this sinister, wispy, unnaturally proportioned terror. She clearly underscores evil with the screaming souls that comprise her lower body (and is it truly a body when all we see are faces of misery?).

When starting out on a new sculpt, I like to rough in the entire model so I have a feel for the pose and the model’s silhouette. I will often have Studio Director Ron Kruzie review the sculpt at this stage to be sure we’re on the same page. As you can see from this screenshot, not every assignment gets an “A.” Working off the list of changes, I was ready to move forward with detail. While a model often goes through several reviews before being approved, we were actually able to finish up Bane Witch Agathia fairly quickly.

One of the areas I revisited (on several occasions) was her lower body. There were several versions of the screaming souls, ranging from detailed faces to much softer, stretched faces. The wispy tendrils at the bottom also evolved from being very simple, curled, and almost cloth-like to the final version, which is way creepier and more smoke-like. 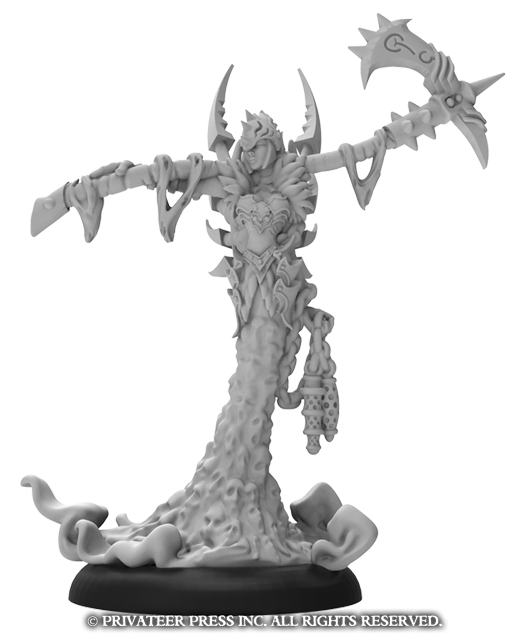 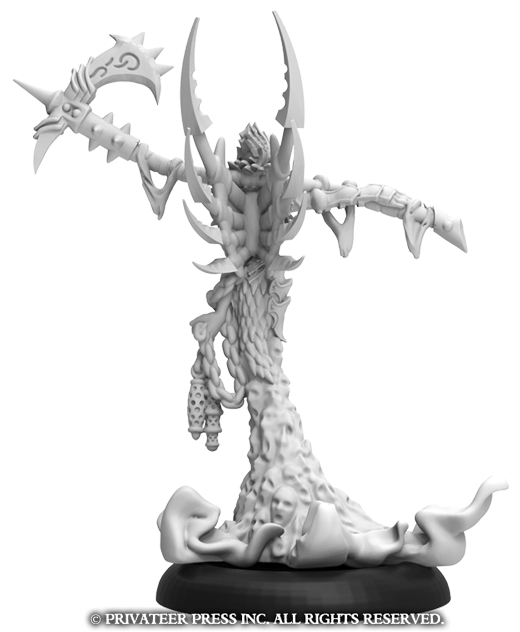 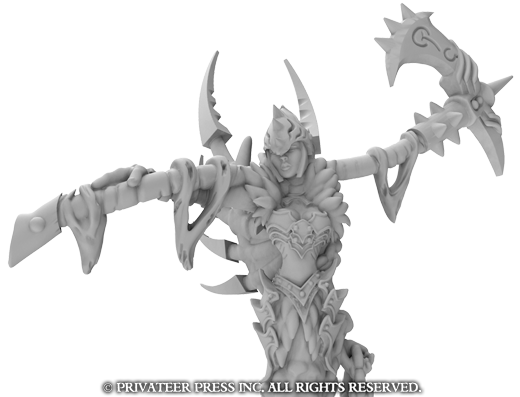 In the final analysis, I really liked her disturbing yet elegant appearance.

But the toughest part about working on Agathia? Not talking about her for over a year!