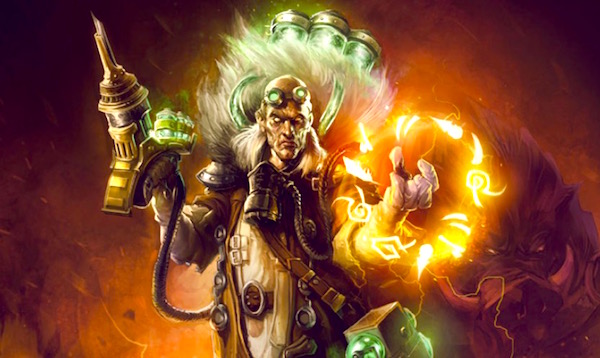 Privateer takes a look at what’s changing for Minions in V3!

From The Man, The Legend – Will Hungerford:

Let’s talk some Minions. In the previous editions of WARMACHINE and HORDES, Minions players could neatly fit their models into one of three categories: Thornfall models, Blindwater models, and Minion models that were not playable in a Minions-only army. So, let’s do this all together now… take that old notion, that old way of thinking about Minions, and put it into your hand. It’s still warm from the previous edition, right? Great, now raise that notion high above your head. You’re doing just fine. Now, smash it to pieces all over the ground. I’m so proud of you.

The landscape of Minions has completely changed. Combinations of models that you never thought you would see together—such as Road Hogs and Croak Raiders or Bloody Barnabas and Meat Threshers—are now real (and incredibly efficient). If you’re a Minions player, the opportunities for creative list-building just opened up—the world is your oyster! Farrow warbeasts are still restricted to Farrow warlocks, and the same holds true for Gatorman warbeasts and warlocks, but that’s about it for restrictions.

You might want to start by taking a look at all of the Minion models that you previously couldn’t use in a Minions army and reassess their value. Wait, that might be difficult since you don’t have the cards. Well, put it high on your priority list when those cards do release. For example, Dahlia Hallyr & Skarath, who were previously unusable in a Minions army, are now a valid and devastating option. While Dahlia hasn’t changed too much, Skarath picked up a point of ARM, a point of RAT, Gunfighter, a new animus, and an insane Bond. Who doesn’t want boosted attack rolls on a 10˝ spray attack that causes Corrosion? I know I do. Dahlia & Skarath is just one example of the many cards Minion players will need to reassess for their armies. Other new options for a Minions army are well known units and solos, such as Cylena Raefyll & Nyss Hunters, Greygore Boomhowler & Co., Orin Midwinter, Dannon Blythe & Bull, and my personal favorite new option . . . Brun Cragback & Lug. I’m putting that bear into every list it can fit into.

Now, for all of you gator or farrow purists, I have some good news. Not only will theme forces for gator and farrow be released in the future (with loads of new models) but if you really wanted to stick to only using models from these sub-themes, you could, and you’d be brutal on the battlefield with them.

As we playtested for farrow and gator models in particular, we made sure that each sub-theme had the proper internal synergies to express their “mini”-Faction identity. Let’s start with the farrow.

The farrow of the Thornfall Alliance are brutal and cunning creatures who have banded together under the tyrannical rule of the most powerful farrow warlord to grace Immoren. Backed by the bizarre Frankensteinesque warbeast creations of the mildly insane Dr. Arkadius and led by the vicious Lord Carver, the Thornfall Alliance farrow have risen from an insignificant group of scavengers and raiders to become a more dangerous threat than ever thought possible. A primarily farrow-based Minions army excels at combined-arms tactics and functions much like a guerilla army with a dash of farrow ingenuity (read: insanity) sprinkled in. Troops like Farrow Slaughterhousers or Farrow Commandos represent the frontline troops, rushing to engage and slaughter the enemy. With a FA of 3, swarming the enemy with the hard-hitting Slaughterhousers—who are even better at that now, thanks to MAT 7—is a valid and deadly tactic.

These frontline troops are backed by the highly specialized Farrow warbeasts, each a genius creation of Dr. Arkadius. The War Hog remains the go-to neck-breaker of Farrow warbeasts, and it does an even better job than before, thanks to its increased SPD of 5 and the 1˝ melee RNG on all of its weapons. Not to mention that its Aggression Dial ability, which still increases his STR by 2 during his activation, now damages it at the end of his activation instead of the beginning. That means there is no chance you accidently cripple an aspect during its activation by using the ability!

Speaking of the good doctor, Arkadius received a significant overhaul that really defines him as the master of mad science and one of the best Farrow warbeast handlers in Minions. His Combat Syringe comes with a variety of attack types, including one that you want to use on your own models! His Raw Adrenaline attack type reads: If a living warbeast is damaged by an attack with this weapon, all attack and damage rolls resulting from its next basic attack this turn are boosted. Given that his Combat Syringe automatically causes 1 point of damage to the living models it hits, pumping your warbeasts full of Raw Adrenaline is very easy to accomplish. Note that Arkadius isn’t restricted to doing this once per turn—with enough warbeasts in his melee range, he could really unleash some carnage! This is just one example of some of the new, nasty tricks the doctor has picked up in the new edition. Finally, all of these elements are supported by the farrow ranged elements. These ranged elements can come from warbeasts specifically “fine tuned” to excel at ranged attacks—such as the Gun Boar, whose Big Gun picked up the High Explosive ability and can cause POW 10 blast damage—or from units such as Farrow Brigands. Speaking of Brigands, they sure did get flat-out better. Instead of choosing one of three cool abilities from their list of prayers . . . we just let them have all three. That’s right, they are innately Tough, innately have Pathfinder, and have Hog Wild as an order! See for yourself. Now, let’s discuss the other major sub-theme of Minions, the gatormen of the Blindwater Congregation. The major aspects of this sub-theme you’ve come to know and love remain: they’re still hard hitting, elite troops supported by dark bayou magic and led to battle by tough-as-nails warlocks. While the farrow may excel at combined arms, the gatormen excel at crippling their opponent’s strengths and then shoving waves of bloodthirsty gatormen and warbeasts down their throat. They’re like a Cryxian Khador . . . Cryador.

I have to start this by talking about the mainstay of a gatorman-centric army: the Gatorman Posse. It shouldn’t be a surprise that these elite troops were toned down a bit in the new edition. Remember how I said we must ensure that Mercenary or Minion options aren’t so good that they overshadow the options available within the Factions they work for? Yeah, the Gatorman Posse was a prime example of that problem. So yes, the Posse was toned down with a reduction in MAT, the loss of a few damage boxes like most heavy infantry received, and a re-evaluation of its prayers. But they (like all living gatormen in Minions) did pick up Tough to better represent their hardiness. It’s hard to look at this unit and think it isn’t still absolutely brutal and a great value for its points. I would easily give it a final grade of “Still Baller.” Gatorman warbeasts are still the literal monsters they always were, and have in fact gotten stronger in many places. For example, the Blackhide Wrastler lost his Rise animus—which now exists as a passive ability, sorry Flying Circus fans—and picked up Rage instead. That’s right . . . Rage, as in give a friendly Faction warbeast +3 STR.

Remember all those ARM-debuffing or POW/STR-buffing spells that the Gatorman warlocks had, such as Rask’s Fury or Calaban’s Parasite? They still have those. And now they have Rage. Gatormen hit things real good and real hard, my friends.

Of course, punching things to death isn’t the only thing that gatorman forces excel at. All of their unique ranged options and their capabilities to cripple the opponent with various forms of death magic remain. In fact, some of their ranged options were tweaked to be even more brutal than before. Take the Croak Hunter. He kept nearly all of his previous abilities with the exception of Hunter, which he traded for Quick Work. There’s nothing like having a potential 17˝ threat with a Poison ranged attack for only 4 points on a Stealth model that’s immune to Corrosion . . . in addition to all of its other advantages.

Finally, I want to end this discussion about gatorman forces with a brief chat about the sheer power of their warlocks. I think Calaban will make a great example of how we tried to reinforce the idea that the Gatorman warlocks truly are the driving force behind their entire army, and the primary source of the black magic that turns their army into a bloody murder machine. I’m going to show you the card. First, read Dark Power and the new wording on Grave Door and then come back here. So there you go, Minions players. If you’re a farrow or gatorman purist, we’ve got you covered. You can still build your army your way and be just as efficient on the table as ever, but I highly recommend that you take a look at all the available options and get ready to do a little experimentation here and there. You’ve got more options than ever before, so enjoy them!

Alright, Minions and Merc players – what do you think?