Mantic: Dungeon Saga is Back! 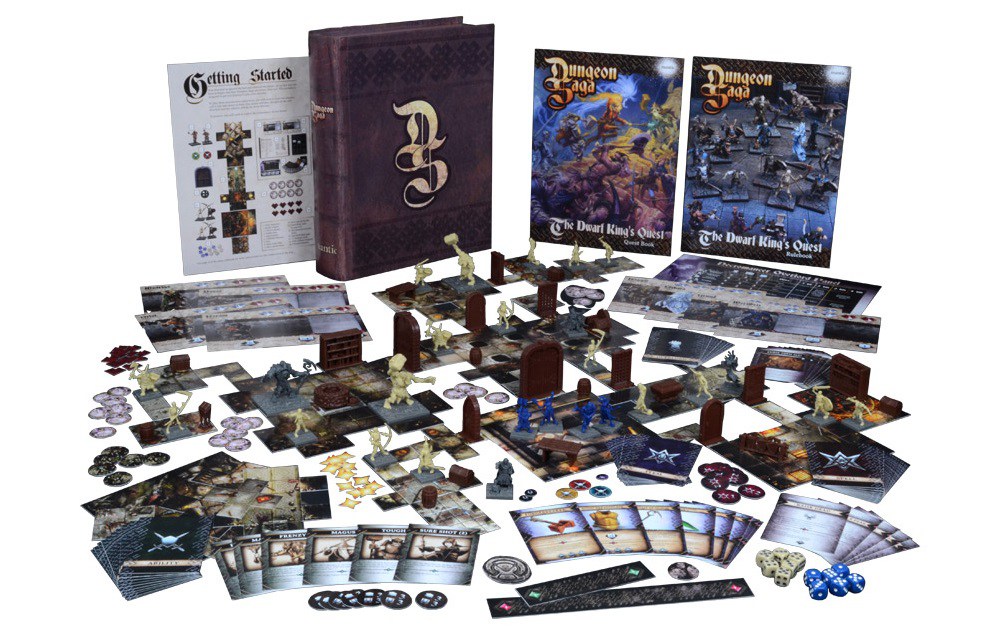 Dungeon Saga and all of the expansions are back in stock – check it out!

The adventure begins anew as the Dungeon Saga: The Dwarf King’s Quest core game and expansions are back in stock at the end of June – if you weren’t able to get everything the first time, now’s your chance!

What is Dungeon Saga: The Dwarf King’s Quest? Dungeon Saga: The Dwarf King’s Quest is the exciting 2-5 player dungeon crawling adventure game, set in the world of Mantica.

One player takes control of the evil Necromancer, Mortibris. Bent of world domination, he seeks the legendary book of Valandor to expand his power. Opposing him are the four heroes, Danor, Madriga, Orlaf and Rordin. Each of these can be controlled by a player, or all of them controlled by one player (or any combination in between). The Necromancer raises his undead minions – skeletons, zombies, zombie trolls – to stop the heroes and bring them down. Though these creatures are not powerful foes, they have numbers and immortality (of a sort) on their side. As the heroes venture deeper into the dungeon, the threats get worse, as they face Mortibris’ lieutenants, like the Elven Banshee, Elshara, or the Undead Dwarf King, Grund. The bottom of the dungeon sees a climactic duel between Mortibris and the four heroes, with the whole world at stake. Who will triumph?

Easy to learn with a step-by-step guide to get you playing immediately, yet challenging to beat, it comes with 4 mighty heroes, such as Orlaf the Barbarian and Danor the Wizard, 4 terrifying villains including the Necromancer Mortibris and 18 horrifying Undead plastic figures: Skeletons, Zombies, Ghosts, Zombie Trolls and more await you! It is an atmospheric game that sees the dungeon brought to life in 3D for that classic quest experience – plastic Dungeon Doors stand between you and the next part of your quest, whilst rooms full of plastic Dungeon Furniture hide loot and hidden treasures. These are placed on top of highly detailed Dungeon Room and Corridor tiles, fully modular for endless amounts of dungeon building. This plus all the Character, Equipment, Spell Cards (and more…) tokens, dice, an epic ‘Magic Tomb’ book box and a rulebook filled with 8 dangerous adventures for your heroes to face – this stunning box contains hours of fun and adventure, for one great price.

Find out more about Dungeon Saga: The Dwarf King’s Quest here, and watch this video to learn how to play:

Beyond The Dwarf King’s Quest…

The adventure continues beyond the core game experience with epic narrative expansions to continue the Dungeon Saga and the colossal Adventurer’s Companion so that you can build your own adventures.

These sets, like the core game, are both back in stock at the end of the month. For the Return of Valandor, that means it will be available for the first time since Christmas!

And we’re not stopping with the expansions, coming soon we have got The Warlord of Galahir– the Greenskin are coming, the Greenskins are coming! Stay tuned.