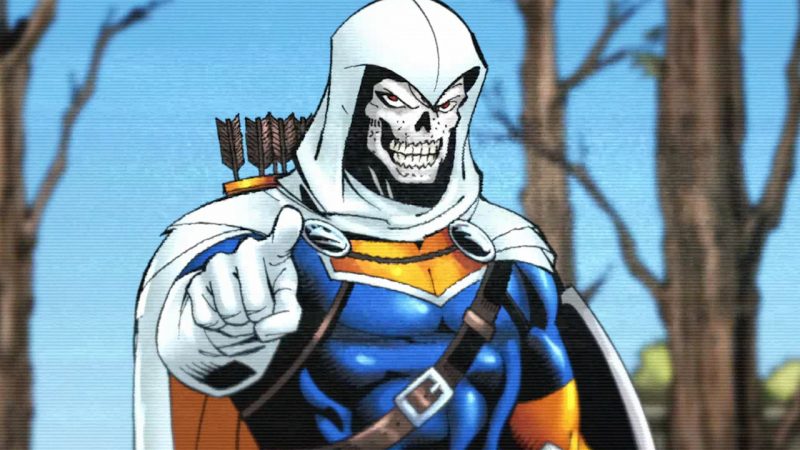 Check out one of the most skilled combatants in the Marvel Universe – the Taskmaster!

A feared villain turned trainer for the Initiative, Taskmaster is an incredible fighter with a photographic memory, allowing him to adapt to the fighting style of anyone he’s ever faced before, just by watching them move! As such, he’s been able to fight and defeat the likes of Captain America, Daredevil, and Deadpool with relative ease – typically, what defeats Taskmaster is his overconfidence! 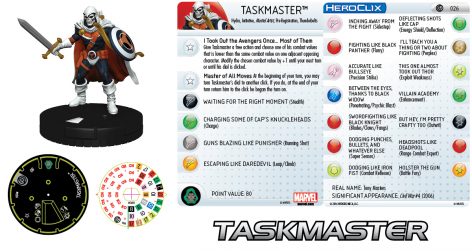 As a skilled combatant, it’s only fitting he have traits that show that. His first, called I Took Out the Avengers Once…Most of Them, states that you may give Taskmaster a free action, choosing one of his combat values that is lower than the same combat value on one adjacent opposing character. You may then modify the chosen combat value by +1 until your next turn, or until his dial is clicked. His second trait really emphasizes Taskmaster’s versatility in combat, and is called Master of All Moves. This trait says that at the beginning of your turn, you may turn Taskmaster’s dial to another click. If you do, at the end of your turn, return him to the click he began the turn on!

Normally, it would make sense to run through power by power, but in the case of Taskmaster, it makes more sense to look at the situations that his dial layout and design offer. Need to work from the shadows? Click 1 offers Stealth, Precision Strike, Super Senses, and Perplex. Ranged combat is the order of the round? Make use of his range of 5 squares on click 3, giving you Running Shot, Penetrating/Psychic Blast, Energy Shield/Deflection, and Enhancement. Locked in close combat and need to deal as much damage as possible to a pesky Shapeshifter? Click 6 offers Flurry, Blades/Claws/Fangs, and Battle Fury. His possibilities are nearly endless, and the opportunities he offers are exciting. 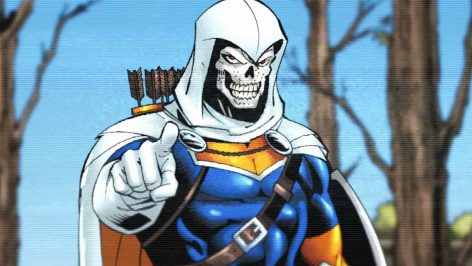 Hinted at earlier, Taskmaster is a man of shifting allegiances – and his Minions of Doom team ability solidifies that by making him a wildcard, allowing you to copy other team abilities from your friendly characters. He’s also able to be run on themed teams for Hydra, Initiative, Martial Artist, Pro-Registration, and Thunderbolts!