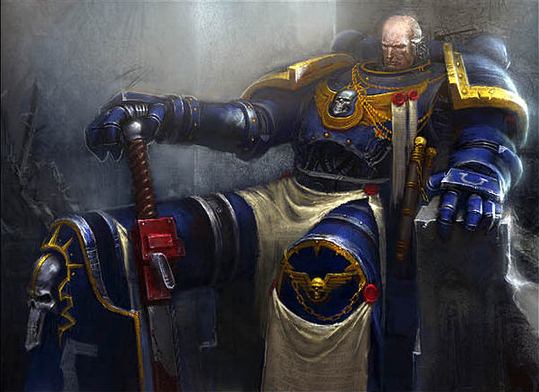 I played a 1000 point game of Zone Mortalis this afternoon with my Imperial Fists versus Ultramarines. The mission was Void Strike from the Horus Heresy Blood in the Void rules. Note these missions are a series of boarding actions that take place inside a spaceship… Pretty cool and you roll to see what effects take place inside the ship at the beginning of each turn! 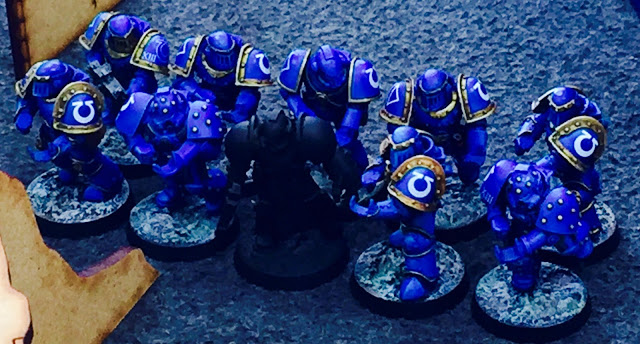 Narrative
Both Legions want to be the first to launch a surprise assault versus the hated Word Bearers on a nearby undisclosed planet but cannot reach an agreement who’ll get the honor. The two Praetors meet and decide that both will select a small war party to battle each other… the victor wins the right to first strike versus the traitors.

I wanted to field an army with no special characters and also use a unique unit that you don’t see often (i.e., Destroyers led by a Moritat).

My opponent was the attacker and I was the defender. You must split your army into two groups – one group is deployed while the other is held in reserve…

The Moritat and his Destroyers deploy hidden inside a building while the tactical squad deploys beside them out in the open.

The Chaplain and his Suzerain deploy along one flank while the tactical squad deploys in the middle out in the open.

Note I opted not to try to seize the initiative.

Imperial Fists 1st Turn:
– The Moritat and his Destroyers elect to hold their ground remaining hidden behind their ruin except for the Marine with the rad missile launcher who pops up top and cranks a shot killing one of the Ultramarine tacticals.

Ultramarines 2nd Turn:
– The Storm squad arrives from reserve and uses their jump packs to move their full distance up the center of the table then run. The Chaplain and his Suzerain remain on their flank moving and running straight ahead. The tactical squad also moves and runs forward as well in between the other two Ultramarine units.

Imperial Fists 2nd Turn:
– High Chaplain Auroras and his terminators arrive from reserve moving into position to support their tactical squad. The Moritat and his Destroyers take the bait bounding up towards the Ultramarines tactical squad. Combined firepower from the Imperial Fists wipe out all of the tactical squad except for their sergeant who breaks and falls back… Note that the Moritat elected to use Chain Fire for a total of 17 hits !!!

Ultramarines 3rd Turn:
– The second tactical squad arrives from reserve and takes a defensive position in the middle of the table
– The Chaplain and his Suzerain move and run again closing the gap to my battle line
– The Storm squad charges my Moritat and his Destroyers; only the Destroyer Sergeant survives and does not break

Imperial Fists 3rd Turn:
– Tactical squad and terminators angle into a better position for shots on the lone Ultramarine tactical Sergeant but fail to bring him down (my opponent made some great saves!)
– The Destroyer Sergeant dies this turn in the ongoing melee failing one of three 2+ saves (Q_Q); the Storm squad consolidates forward

Turn 4 – Stable (no effects this turn)

Ultramarines 4th Turn:
– The Storm squad and Suzerain both combi charge my tactical squad wiping them out

The game then continued for seven full turns featuring the two Chaplains and their elite retinues slugging it out in close combat, both sides bound and determined to earn their Legion the honor of first strike versus the traitorous Word Bearers. Only the Imperial Fist terminator sporting the plasma blaster walked away from the brawl accounting for both the enemy Chaplain and most of the Suzerain… Some epic grappling indeed !!!

Results:
The final count was as follows for total victory points:

If only I could have killed that one remaining sergeant from the first Ultramarines tactical squad ! Oh well it was not to be but my surviving terminator has been promoted to a Captain and will be honored with leading a hand picked kill team to join in the initial assault of the Word Bearers… He was definitely the man of the match !!! My Destroyer sergeant almost survived the second round of melee versus the Ultramarines Storm squad… Would have most likely been a real game changer if he had been able to swing his power fist again.

Post Game Analysis:
Going after the first enemy tactical squad with the Moritat and his Destroyers was a big mistake on my part which in turn quickly lead to their demise… Should have kept them tucked away and popped shots from a safe distance with their rad launcher. While Destroyers are frowned upon as not a fundamentally sound unit (mostly due to their high point cost) I think they can provide a valuable role on the battlefield… Their speed and mix of arcane weapons makes for a deadly unit from range but obviously they are not well suited for melee.

Both the Ultramarines Suzerain and Storm Squad really pulled their weight. As noted above speed is vital in the close confines of Zone Mortalis. The Storm Squad struggles versus 2+ armor though which is their major drawback.

It was a great game ending in an epic melee that covered several turns… The lone terminator winning the fight was most definitely a morale victory for me.