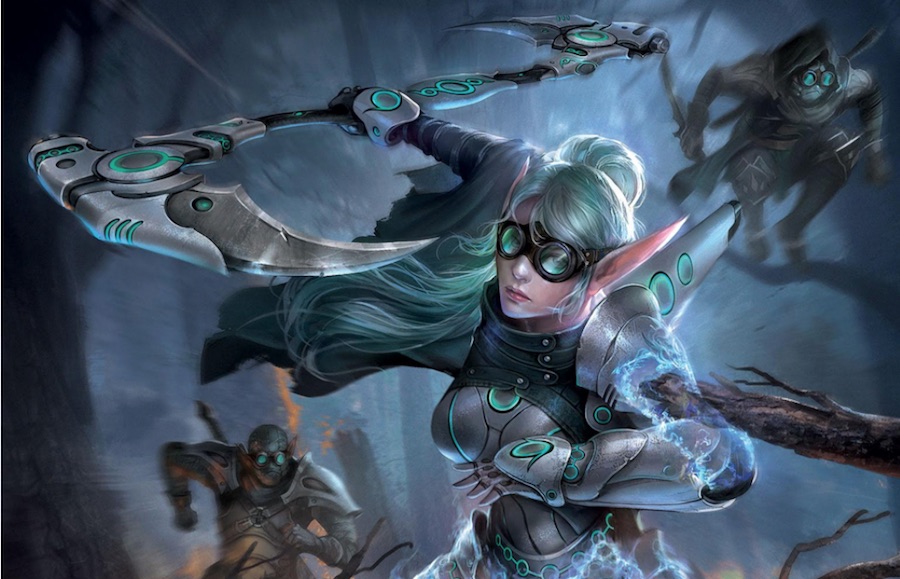 The Journeyman Warcaster gets a new look – come see!

Elara, Tyro of the Third Chamber, has been forged into the perfect instrument for the Retribution of Scyrah’s war against human arcanists. She stands prepared to face any danger in service to the Retribution. As she darts from foe to foe, each kill imbues her myrmidons with power they in turn unleash against key targets.

Finally, I get to do an Insider on my favorite Journeyman Warcaster! Our young Retribution Warcaster, Elara, Tyro of the Third Chamber successfully completed her “learn-to- kill-everything” training and became a full-fledged warcaster. This promotion came, of course, with an impressive, new title: Elara, Death’s Shadow. Comparing her original concept (by Nick Kay) to her current concept (by Nate Feyme), you can see Elara is the same tall, lanky combatant we first met a few years ago.

Peeking at the early concept art gives us an idea of what her creation process was like. When creating new warcasters, Art Director Mike Vaillancourt likes to start with a lot of options for the team to review. To keep ideas clean and simple, he started with these silhouettes: Once the team had finalized Elara’s new design, it was time to pick her pose. Sculptors use the pose as a guide for their work. Sometimes it will be tweaked to improve production or to crank up the cool factor. For Elara, they went with option C and passed the final concept along to a sculptor, who just happened to be me! (Are you really surprised? I mean, who else would sculpt Elara? There was no way I was letting this project slip through my fingers!) As a fan of Retribution of Scyrah, I try to get as many sculpts as I can for this Faction. Plus, I had sculpted both of her previous versions, so I was excited to have this opportunity to sculpt her latest version. In the end, I was very pleased with the results. The whole process made me feel like a proud parent watching my kid grow up! And finally we’ll wrap things up with a great illustration (by Jeremy Chong) that shows Elara in action. For me, this piece was an instant favorite, and it gives a hint at what Death’s Shadow brings to WARMACHINE. I can’t wait to add Elara, Death’s Shadow to my own games! What do you think of her new look?