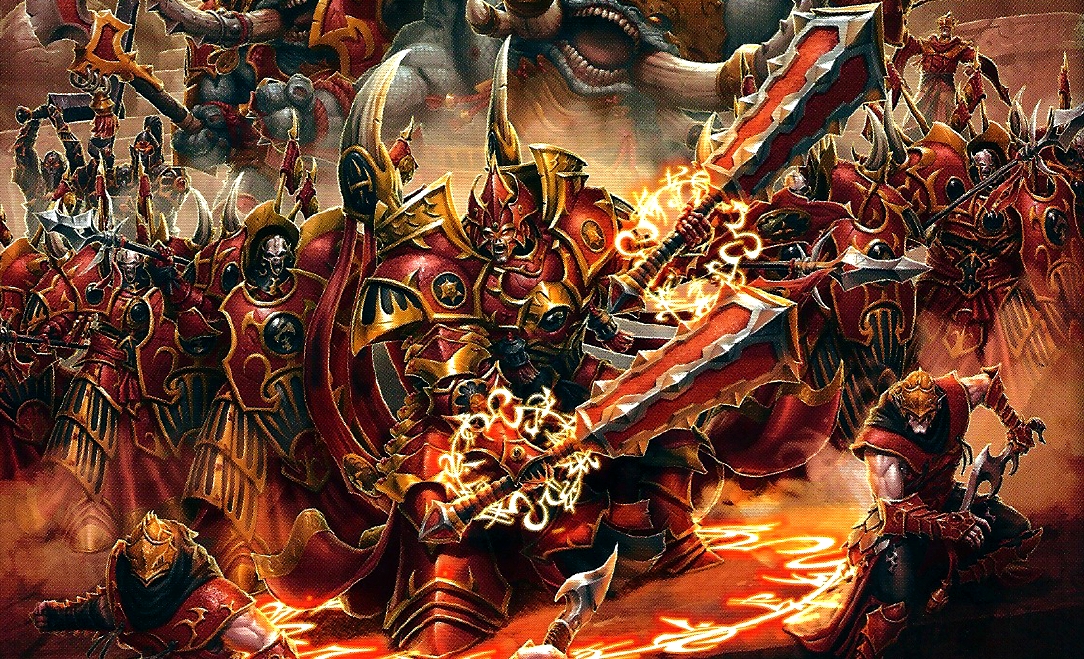 Check out what you can do with Skorne using the new edition.

In the last year before the release of the new editions, I did something I had never done in my eleven years of playing WARMACHINE and HORDES. I played a single Faction consistently at every event starting at Lock & Load 2015 through Kingdom-Con 2016. That Faction? Skorne.

While my last two army Insiders have focused on new army lists I’ve discovered since exploring the shiny ball pit that is the new editions, the one I’m going to cover today is just a new-edition evolution to my tried-and-true Mk II Skorne list.

I call it “Stone Faced Killahs.”

OK, so let’s just address the elephant in the room. Immortals now grant souls. This means that Zaal 2 doesn’t need to run with a bunch of squishy meat bags anymore to make the most out of his Soul Taker: Reclaim ability. Ancestral Guardians and Immortals all give up those sweet, sweet souls when they are destroyed. And given Zaal’s feat Strength Eternal, you really want plenty of constructs to make maximum use of it. That said, while it’s easy to get carried away and build an awesome all-construct army, I’ve found that Zaal works best with a few living units and models as well. Nihilators are my go-to choice with him as they can get an incredible amount of work done between their RNG 2 swords, Berserk, and the ability to boost from Zaal’s Aura of Power spell (the spell formerly known as Transference). Nihilators make the perfect first wave for the army, because in the end you want your opponent to kill them to fuel Zaal for the second assault wave. So get them into your opponent’s grill fast and let them take as many of the enemy down with them as possible.

As expected, while the Nihilators can get some serious killing done, they are really there to clear the way for the true stars of the army, the Immortals. One of the biggest changes to this list between editions was that I dropped the two Ancestral Guardians that used to be in it. This is because of the changes made to the Extoller Advocates. While Ancestral Guardians and Immortals still go together like chocolate and peanut butter, one isn’t required to get the most out of the other anymore. The Extoller Advocates however, are a must. Armed with their three Soul Taker: Guardian abilities, these guys turn the Immortal units they accompany into versatile and surprisingly mobile threats, given their low innate SPD 4. Backed up by Zaal’s feat and Aura of Power, there’s almost nothing the Immortals can’t get to. And once they get there, there’s even less they can’t destroy with extreme stony prejudice. There’s little more satisfying than having a unit of effective-ARM 22 Immortals go Incorporeal and charge through your enemy’s cheap screen to wreak havoc on the juicy center of his force. The Tyrant Commander and Standard is another great support option in this army. Whether you need to hand out Pathfinder or just want to add even more speed to your Incorporeal Immortals, the Tyrant Commander’s Battle Plans are worth every point invested in him. And with his MAT 8, RNG 2, P+S 12, Weapon Master halberd, the Tyrant can show people why he’s the one who gets to boss everyone around.

Ever since the release of the Aradus, they’ve been my go-to warbeasts in Skorne. They’re tough, armed with absolutely brutal weaponry, and they look badass. While previously useful, the drop in cost on Heightened Metabolism makes using it far more friendly nowadays. In combination with a potential seven melee attacks, six with RNG 2, the Aradus Soldier can give even a starving Dire Troll a run for its regenerative money. And don’t discount the fact that its claws now boast the Chain Weapon advantage. When pumped up by the Pain Giver Beast Handler’s Enrage, P+S 17 attacks that ignore shields are flat out awesome. Unlike other armies though, Zaal’s battlegroup is there as backup to the rest of the army. The Sentinel is used to make opportunistic shots while the Soldier hangs back and performs cleanup after the units do the heavy lifting.

The last model in the army may not hail from the Skorne Empire, but he is just as mean and nasty as anyone born east of the Stormlands. Ambush, Take Down, Wild Shot, and a host of awesome ammo types make Hutchuk a fantastic ace in the hole. The biggest trick with this Ogrun alchemist is knowing when to have him drop in and start tossing grenades and cracking skulls. Most of the time, I find he makes the biggest impact if he ambushes in round 3 or 4. By that point, the Nihilators are causing plenty of problems for my opponent, and the second wave of my army with the Immortals are just about ready to smash into his lines as well. All this adds up to making the sudden appearance of a quake grenade-wielding mad alchemist who also likes to smash things with an oversized mace a rough proposition. Every move your opponent makes trying to mitigate the carnage Hutchuk can potentially cause to him is likely a move that leaves him vulnerable to the rest of your army. So there you have it. A modern take on a tried-and-true classic, taking Mk II traditions and fusing them with new-edition flavors!