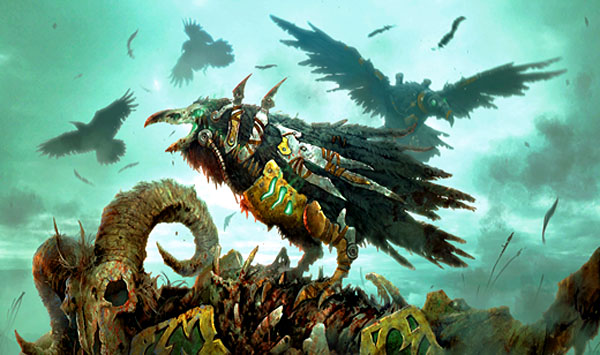 CAW CAW!!! Carrion Thralls are picking out the enemies bones. The first wildlife unit is here for warmachine…well more like deadbirds.

This is a new FA:2 unit for cryx. It makes up a unit of 6 or 10 models costing 6 to 10 points. 1 point per model units are few and far between and these guys are a bargain for what they do!!! 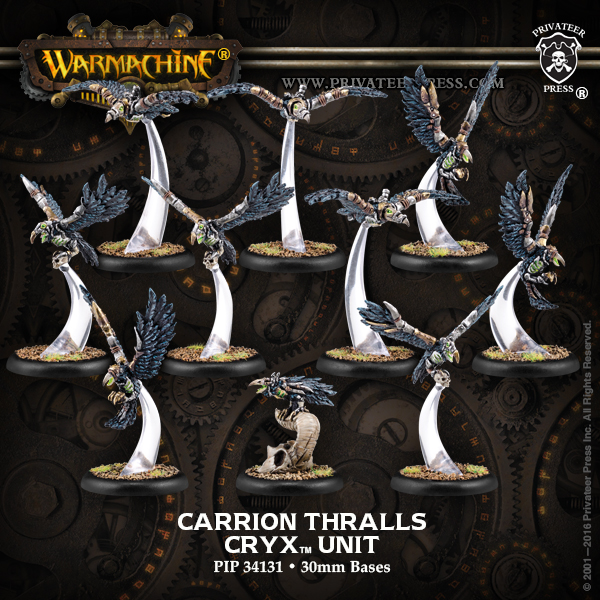 What Do Carrion Thralls Do?

The Carrion thralls are one of the best deals in Cryx and probably warmachine for the points. They have crazy good stats for cheap infantry with SPD7 and DEF13. They lack a little in the MAT department at 5. And they are only POW7 so not hitting heavies to hard.

But, in a faction known for debuffs and some special rules they have it still is a great deal!
The birds have Combine melee attack so they already can tag team to hit higher defense models.
And shocking enough the birds have Flight! This means that annoying terrain and other models won’t slow them down.
That isn’t all folks. Unlike the poor mechanitrhalls that needs tons of help and luck to make it to the enemy the carrion have PROWL. Hiding in woods seems a bird like thing to do.
They aslo have Finisher. Meaning if there is even 1 point of damage on the model they are attack they are effectively weapon masters rolling an extra dice of damage.
Last but not least, the carrion have re position 5. Even if they can’t run by some rebuking spell they can still move 7″+5″. 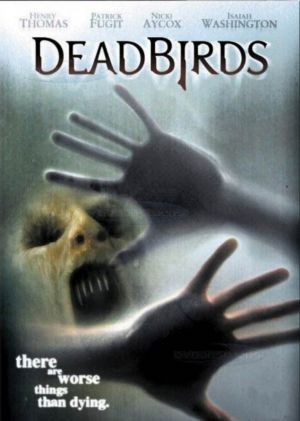 Cryx usually have 10 points lying around in there lists. If you are looking for some jam units, or something that might not get shot off the board consider the Carrion Thralls.

Consider Skarre1. She likes troops, she can help hitting high defense models with dark guidance, and hit and runs are in the pirate ways! Popping Skarre’s feat on a Carrion Thrall makes it POW12 and with a few buddies helping it with a CMA could easily be POW16. If that hits a jack with some damage on it, the finisher attack could cripple it easily.

This list is fast and annoying to deal with. Even the enemy is light on magic attacks your raiders can do some dirty things. The Carrion can jam up the enemy lines or kill enemy infantry that isn’t absurd armor.

I think if you are not going to run a Sepulcher then Carrion Thralls are just the better of the cheap troop spam. They don’t need ghostly because of flight, they don’t need shooting protection from non blast if there is forests/rubble to hide in. And they can move really fast. I think this unit really covers a lot of annoying troop spam that Cryx used to have.

~What do you think of the new undead birds BoLS? Please share in the comments below.