Fantasy Flight Games latest source book for their Star Wars RPG is on the way – lets talk about what’s in store!

Bounty Hunters are one of the most iconic anti-hero classes available to players in the Star Wars RPG setting Edge of Empire. We’ve talked about the initial announcement and now Fantasy Flight Games is showing off some of the cool new tricks you’ll have access to with the new book.

One of the key new features for No Disintergrations are the new races that are going to be added with this book. FFG showed off three of them in an earlier preview but lets go over those so we’re all on the same page:

Devarons are a hardy race who are often exceptionally cunning. Their sharp teeth and cranial horns are natural markers and other races often associate them with demons and monsters from their own legends and myths. There may be some truth to that because the Devarons were some of the earliest explorers and cartographers of the galaxy – who knows what could have happened with those early explorers…

But as Bounty Hunters their aptitude toward survival and cunning are very handy. Plus, their Street-smarts can help them to track down targets or evade Imperial entanglements. 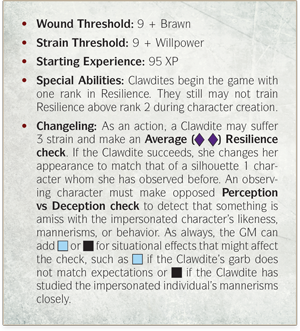 Clawdites natural ability to mimic others is both an appealing asset and a reason for mistrust. They are Reptilian humanoids who have used their natural ability to literally blend in with other races. This makes them fantastic spies and exceptional Bounty Hunters.

This is one of those races that will probably make it’s way out of the Edge of Empire setting and have lots of cross over appeal in both Age of Rebellion and Force and Destiny – who wouldn’t want to be a Shape-changing Rebel Spy or Jedi Mind trick away from fooling the Empire?

Kallerans, who first debuted in Marvel’s “Kanan: The Last Padawan” Comic, are a new arrival to the Star Wars scene. They are semi-amphibious and are quite familiar with conflict. They are quite a physical race with high marks in Brawn so the new specialization “Martial Artist” is a really good fit for them.

One of the cool things about the Kallerans is that they can also use their antennae to communicate silently – much the same way other races uses hand gestures. This technique can be taught to their allies so they will be able to at least read the Kalleran’s intent without uttering a sound. That could be very handy in the right situations!

Speaking of Martial Artists, FFG also talked about those in a recent preview as well. Brawn and Willpower are two of the core stats that Martial Artists will want to focus on because of their tendency to draw on both their inner and outer fortitude. If you’re looking for a physical warrior type for your Bounty Hunting then the Martial Artist might be a great fit!

One of the key talents for them is their Unarmed Parry skill. This allows them to parry incoming Melee attacks when they aren’t holding a weapon and it reduces the strain cost when they do it! Martial Artists can also develop their offensive capabilities into deadly attacks with the Precision Strike talent. Never be caught without a weapon when your hands-and-feet and just as deadly as your blaster.

The Operator is the Bounty Hunter of choice if you’re going to be involved with any starfighter or system hopping adventures. Favoring high Agility scores they can really help the group out as the team pilot or gunner.

But Bounty Hunting isn’t all about flying your ship like a boss – sometimes you’re going to have to be able to pull the trigger, too. Luckily the Operators have that covered as well. Hindering Shot will help you shut down your prey’s means of escape. The gunnery-related talents of the Operator are also what helps to keep those bills paid!

The last Specialization is the Skip Tracer – that’s another term for Bounty Hunters if you didn’t know. Skip Tracers are masters of using their wits to get their prey. It’s sometimes more profitable to out-smart your target than it is to rush in blasters blazing. Part of the job is the investigation to find the mark and a good Skip Tracer will make that a lot easier for everyone else on the team.

In essence, the Skip Tracer wields the power of plot. It requires a lot more player/GM narrative cooperation than your typical class and could be ripe for abuse if used poorly. But when used correctly it can really help the players stay on target or allow the GM to hand-wave a missed clue by the players. Hey, even the best players and GMs make mistakes and these talents can do a great job of allowing the players to pull some bit of knowledge out that will keep the game from stalling. That’s a super power if you ask me!

No Disintegrations is going to be a great sourcebook for players and GMs. If you’re looking for a game that involves a bit of investigation, some seedy underworld contracts and a group that isn’t afraid to skirt the Imperial Laws then this is going to be a fun book. It’s going to add a lot to the overall ecosystem of the Star Wars RPG even if you don’t want to become a Bounty Hunter. I can’t wait to take a look at some of the GM tips on handling Investigations – anything to make that more engaging and entertaining is good stuff! 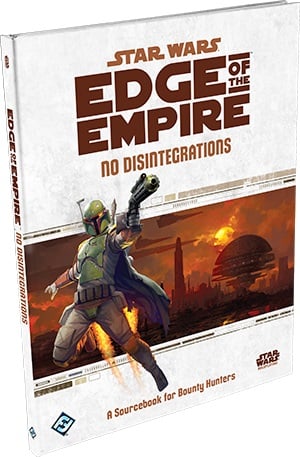 As a pragmatic, shrewd, and dangerous Bounty Hunter, you have a unofficial, galaxy-wide license to hunt and even, if you like, kill. The quarry and the reward is up to your contractor, but all the rest, from how you catch that quarry to what you do with it, is up to you. There aren’t that many rules that you adhere to, but there are many sentients throughout the galaxy that fear you.

No Disintegrations, a sourcebook for the Star Wars®: Edge of the Empire™ roleplaying game gives you the tools and talents necessary to succeed as a Bounty Hunter, as well as the adventure material that Game Masters need to make that hunt thrilling, suspenseful, and a good challenge. Within its ninety-six full color pages you’ll find new species, three Bounty Hunter specializations and two Signature Abilities, plenty of iconic vehicles, sophisticated gear, and much more.

No Disintegrations? Not even a little one?

*Not an actual Boba Fett quote…yet.