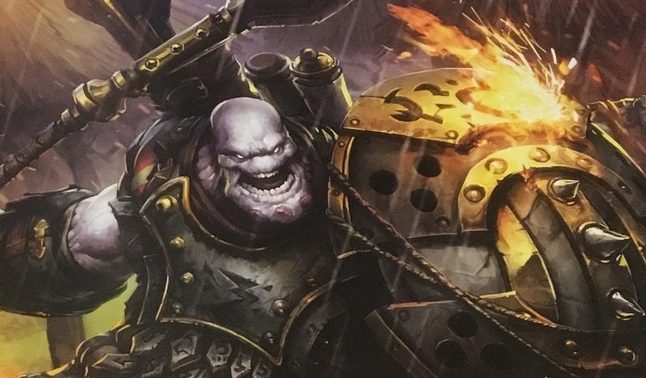 We take a look at the newest incarnation of Madrak3 for Trollbloods Hordes fans!

This is the Madrak 3 or Madrak the Great Chieftain. He is a a troll warlock on a medium base. He has a battlegroup pool of +29 points. If you are tired of taking the krielstone and like a support warlock this might be your troll!

What Does Madrak 3 Do?

Support, support, support! This troll is all about getting the most out of his infantry and warbeasts. He protects them going up the board into the teeth of the enemy and using his spells and abilities tries to absorb the nasty stuff and fight through to the other side.
Madrak3 has a RNG8 POW14 magic throwing spear which he can shoot a 2nd time with reload.
In melee he is armed with a POW14 RNG2 magic spear and a RNG .5 POW12 shield.

His stats are pretty legitimate with MAT/RAT of 7 and DEF14. He is ARM16/18 depending on if he gets his shield bonus. He boasts Fury6 and 18 boxes.

He has stolen some abilities from his fellow trolls.
Protective Aura: That is right , you don’t have to take a kriestone while this troll is leading your army. He however does not remove continuous/incoporeal/add strength like the UA of the krielstone.
Righteous Vengeance: He can move if you kill his bros.
Shield Guard: He has taken the warder life.
Beat Back: His shield lets him get farther into the line.

Spells:
Fortune: Trolls do have a problem with accuracy so this definitely helps in that department with the rerolls.
Rebuke: Stryker2 and Harby have share their knowledge of recking units abilities to charge all game.
Soothing Song: Some fury management is always nice for a low fury caster.
SpellPiercer: This makes trolls ranged game pretty dirty combined with fortune. Not having to worry about arcane shield , blur, or deflection is a big deal for highwaymen or scattergunners.
Feat: Rallying Cry
4+ tough with no knockdown and a 3″ advance. 50/50 chance on your infantry not dieing and able to re position when they tough. This is a nice feat in the right circumstances. Watch out for grievous wounds or anatomical precision can get around it though.

Not having to take a Krielstone is a nice bonus to the point pool that trolls usually can’t access. As stated above he also gets around defensive buffs with spellpiercer. This makes a ranged based troll army kind of intriguing. This list can hold zones while projecting some decent ranged power.

B: This guy is fun if your normal opponent uses a lot of defensive magic buffs. Having blessed in trollbloods is a nice deal. His feat can be great or useless depending on if you can roll 4+ or how much anatomical precision/grievous your opponent has access to. He is solid but probably not top tier.

~Any trollblood players out there BoLS? Please share in the comments below on what you think of Madrake3!