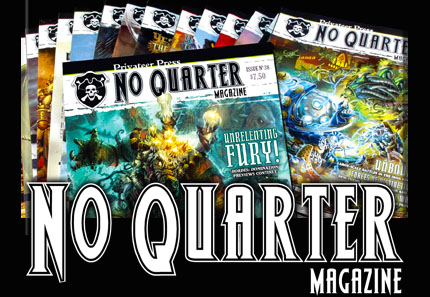 No Quarter is going to include games from now on. Take a peek at the all new Grind, coming next issue.

With Grind coming up in just a few weeks, I wanted to give you a sneak preview of one of the key features in the newest edition: the ability to have “cross-Faction” teams. Basically, when you build your Grind team, you choose to either build a warjack team or a warbeast team. Then, you take your starting resource of 75,000 crowns and purchase models to fill out your team roster from either the warjack manufacturers or the warbeast manufacturers (depending on which type of team you want).

You can build your team using any mix of models from these manufacturers, so if you want to have a warjack team with an Ironclad, a Slayer, and a Juggernaut…go nuts. The maximum (and recommended) number of models you want in the Grind arena at any given time is six, but extra models stay on your bench during gameplay. If one of your starting models is injured during the game, you can always substitute in another benched model later on, giving a benefit to those players who decide to have a deeper roster instead of just loading up on the six most expensive options.

So, without further ado, check out the list of warjack and warbeast manufacturers you’ll find in Grind. I hope you find this info useful to start planning your own Grind team for the big release in just a few weeks! Advertisement
What are your thoughts on the changes Privateer is making to No Quarter?
Subscribe to our newsletter!
Get Tabletop, RPG & Pop Culture news delivered directly to your inbox.
By subscribing you agree to our Terms of Use and Privacy Policy.

Author: Mars Garrett
Pop culture staff writer that has been on the BoLS team since 2010. Contributor on the One of Us podcast. Marvel, Vertigo, and dystopian sci-fi fan. Enjoys bad movies, amazing stunt performances, and the internet. Hates rom-coms. (she/they)
Advertisement
Board Games Privateer Press Tabletop News Warmachine-Hordes
Advertisement

Fall of Cadia: A Peek Inside