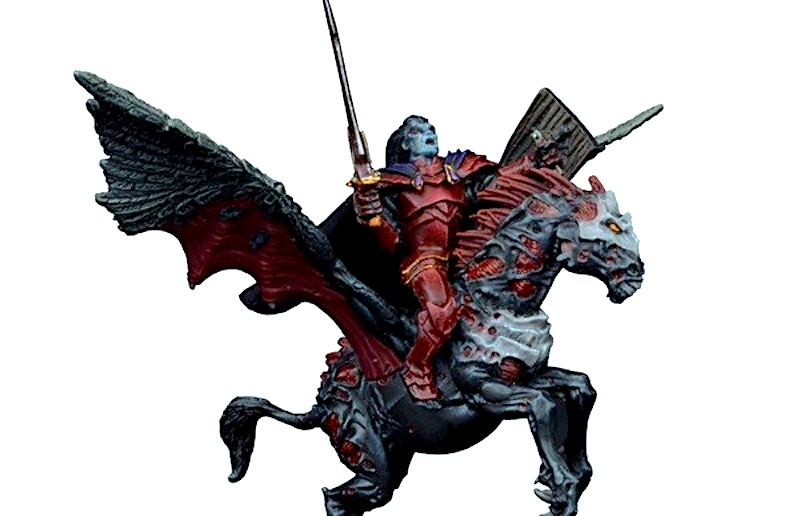 Check out what’s coming this July, just in time for the Edge of the Abyss campaign for Kings of War.

The Edge of the Abyss summer campaign is around the corner, it’s time to get excited. We’ve already seen what the heroes of the campaign are like (and we know that each is going to get their own solo-adventure, including my Summer ’17 OTP), and now we’re getting a look at some of the other new releases for Kings of War, including a new monster, a re-release of an old favorite, and some accessories that will definitely come in handy for players!

All of the new products below have just gone up for pre-order on the Mantic website, so you can head on over there and get ready to gaze over the Edge of the Abyss.

First up, we have an accessory that no self-respecting Kings of War player should be without – a deck of Spell and Magical Artefact cards! Have you ever been in the heat of battle and forgotten what an Artefact can do or which spells your magic user has? Well, now you need never fear! With this handy deck of playing card sized cards you can quickly have all the information you need at your fingertips. You can either place them down in front of you at the edge of the table or lay them behind each unit, so you (and your opponent) can clearly see what unit has a Magical Artefact. Meanwhile, each time you use a magic spell, you can flip them over to indicate they’ve been used. The set includes all the Spells and Magical Artefacts from the core rulebook and the Clash of Kings supplement. They’re due to ship later this month and you can pre-order now!

It’s safe to say that the enthusiasm for our existing hard plastic 20mm and 25mm movement trays caught us a little by surprise and they were out of stock almost as soon as we put them up for sale! Well, we’re hoping the new 40mm and 50mm movement trays will be just as popular. The 40mm Movement Tray is designed for  Large Infantry (like Ogres or Elementals) while the 50mm Movement Tray is made for Large Cavalry (like chariots). They come in legion/horde sizes, respectively, but can be easily broken apart (after a little scoring from a hobby knife) to make smaller sizes for hordes or regiments. If these are anything like the first batch, you might want to grab them now before they go out of stock!

If you’ve read our previous blogs about developments at Mantic HQ, you’ll know we’ve opened up an in-house resin production facility. The great thing about bringing resin in-house is that we can produce some incredibly detailed miniatures, like the new Edge of the Abyss heroes, and limited edition pieces, like Eeny, Meeny, Miny, Moe. However, the other really cool thing is that we can make some BIG monsters for Kings of War that just wouldn’t be possible in metal (some would probably break your toe if you accidentally dropped one on your foot). The first of our mighty monsters is the fantastic Tree Herder, which can be fielded in an Elf or Forces of Nature army.

Standing around 150mm tall, the Tree Herder will certainly make an imposing sight on the battlefield! Plus, being manufactured in resin means we can add lots of interesting little details, like a bird perched on one branch, while a squirrel dashes up another part of the tree. The Tree Herder comes with optional pieces, so you can give it a different appearance too. We’ve only got the render in at the moment but we can’t wait to see the painted version!

Finally this month, there’s a blast from the past with the Vampire on Undead Pegasus. Although previously a popular release, the Vampire was a touch on the small size, which was a pain in the neck. So, we’ve gone back and re-sculpted the Vampire to make it fit a little better! There’s really no need to says fangs… I don’t know that I’d ship the Tree Herder and the Vampire–just not sure I’ve got a stake in their relationship.