Salamanders: Not Just About Flames

We’re getting a better take on the Salamanders today and what the fiery warriors are bringing to the tabletop.

Yesterday we saw the Salamander’s chapter tactics and today we learned a bit more about the scions of Vulkan.

Here’s the Salamanders chapter Tactics to get us all up to speed: 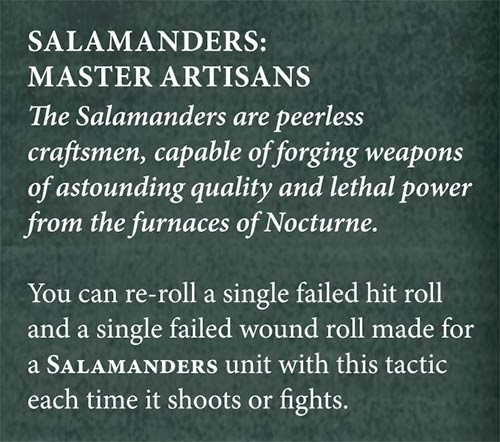 This is pretty spicy. The re-roll will affect both the shooting and fight phase, and is used by any and all Salamanders units.  So basically this is an UBER version of Master Crafted from previous editions that now works on dreads…NICE!  While it’s not going to make a difference for that bolter jockey in your tac squads – it does mean the Salamanders WILL be hitting and wounding when it matters. That melta-gun or powerfist that REALLY needs to hit or wound will be getting the reroll. This means the Salamander will be unlikely to whiff at critical times, and make the army more steady and reliable on the tabletop. 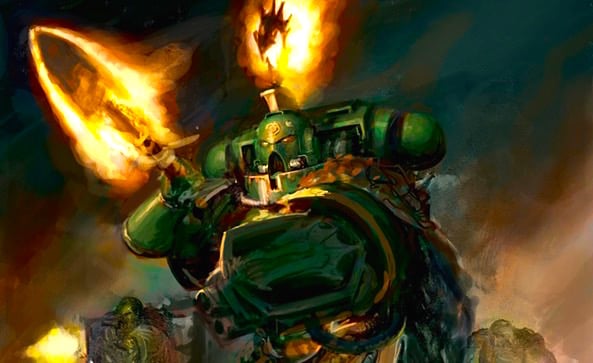 Forgefather stacked with Rites of Battle, stacked with Master Artisans is going to really make that 6″ radius of Salamanders killers with anything, but especially with flame and melta weapons.

Flamecraft: Increases the power of all Salamanders flamers. (I would assume some type of increase for to-wound rolls)

There will be some way to get a +1 toughness and +1 strength for Salamanders characters. (Based on previous codexes, one of these is probably some type of dragonskin mantle)

Finally we learn of a weapon option for the new Aggressors : Flamestorm Gauntlets

The Aggressors fire twice if they don’t move and the Flamestorm Gauntlets are aided by Flamecraft and Master Artisans and Forgefather. These guys may be Vulkan He’stan’s ideal entourage.