When the new codex fairy comes around, will some armies be skipped?

There are few things that engender as much excitement and anticipation in 40K players as getting a new Codex. Anytime a new Codex is announced players go through a range of emotions. They hope that it will be good, fear that it will suck and wonder if unit X or Y or Z will be added or removed. It can truly be a hectic time for a player. Other the other hand, few things are worse than seeing army after army get new codexes, while your chosen battle force languishes with outdated rules. Perhaps the only worse thing is getting a new codex shorty before a new edition invalidates your it.  With GW setting a fast paced codex release schedule it’s time to ask – is everyone going to get a new Codex?

The Need Is Strong 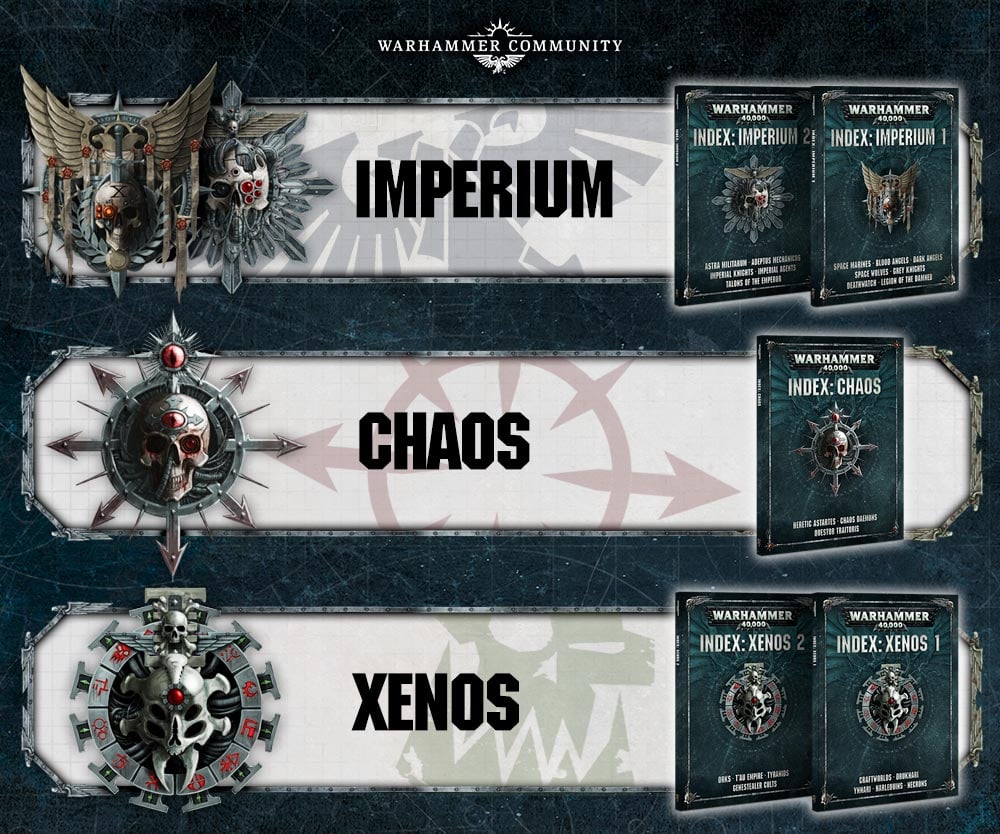 While the Indexes were a nice stopgap, the sad truth is that to be competitive you need a codex. We’ve seen now with the release of a number of books that a Codex army is far superior to an Index one. Form better points, to artifacts and stratagems, the codex armies tend to have the tricks and combos to pull off wins. Sure, Chapter Approved helped the Indexes out with updated points, but there is still relatively little comparison.  It’s not simply about point costs. Warlord traits, artifacts and most importantly stratagems are some of the major hallmarks of 8th edition. Playing armies that only have the most limited accesses to these doesn’t really feel like playing 8th. You are in essence missing out on a huge part of the game. Because of this, EVERY army really needs a codex. 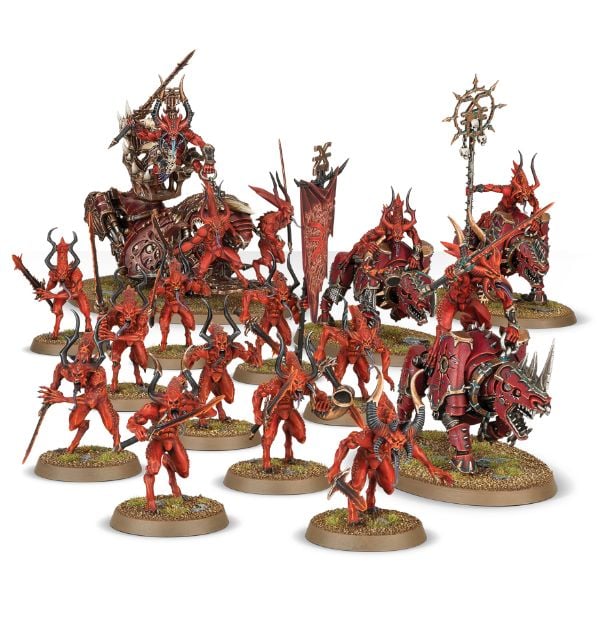 We already know that Demons are the next book coming out. Besides them it’s fair to say that a good number of armies will get codexes in 2018. Should GW keep a similar release schedule as they have had this past year that could mean as many as 20 books next year! Digging through Chapter Approved has given us some guesses as to what books might be coming next. If I had to guess I’d totally say that Necrons and T’au are soon. Outside of that though it’s clear we should get a lot of new books in the next year.

Will Everything Get A Book?

However that leads us to an important question. Will everything get a Codex? In that past certain armies have gone editions without out updated rules. It would not be out of line for some armies to get left behind. Maybe an army is not popular, or vital and GW thinks they need to put out a campaign book, or a newer Space Marine Codex, or whatever. Armies have fallen into no codex black holes before, it could happen again. I think Chapter Approved might also have some hints about what gets books and what doesn’t.

What Is A Faction? 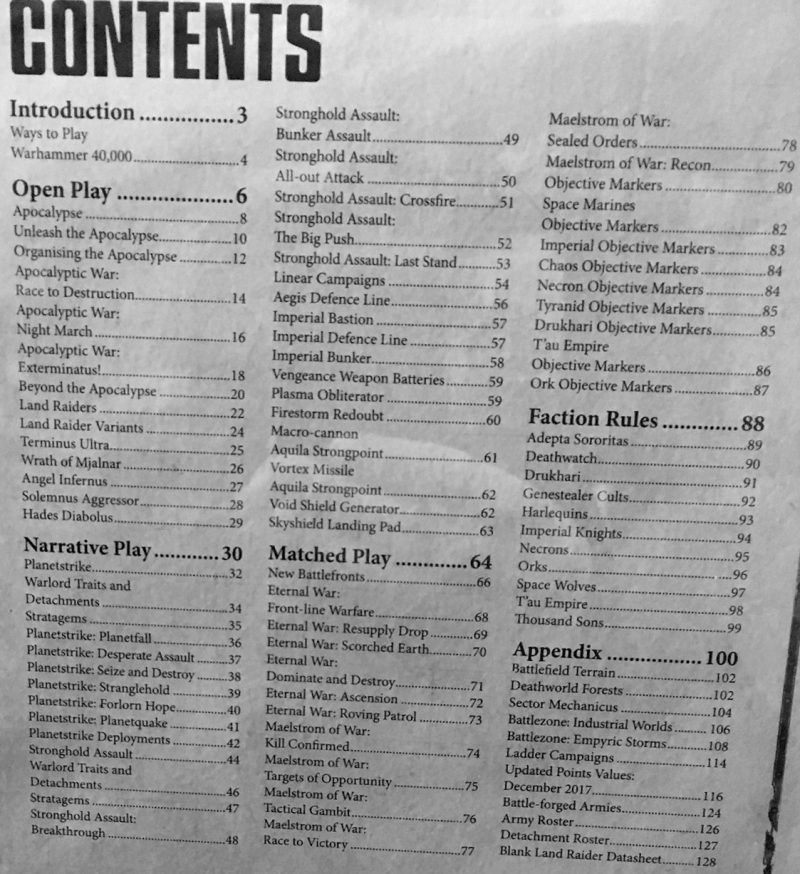 My contents are always getting tabled on turn one.

I think it’s  safe to say that all the “factions” in that Table of Contents are going to get books. All these “factions” got updates in Chapter Approved and those stop gap measures seem aimed at giving you something to play with until you get get a new book. 40K and the Indexs have a lot of factions, and sub-factions and what not. Chapter Approved seemed pretty set on designating what is a faction and what isn’t. And it’s that things that aren’t on the list that worry me. 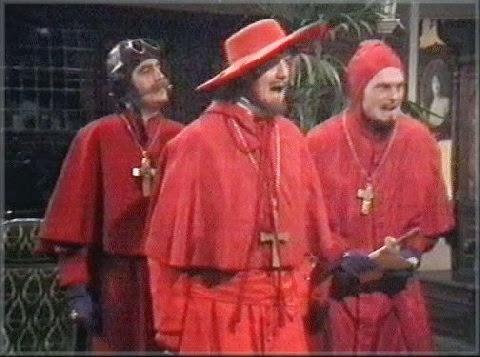 To be fair, I should not in fact expect to them get a new book

There are a lot of random Imperial sub-factions, Inquisition,  Custodes, Sisters of Silence, Assassins.  None of these fall under any of the factions in Chapter Approved. Given that, it is possible that these won’t get a real Codex. Or at least not anytime soon. And making a codex for them has its own challenges. Each of these groups are too limited and small to really function on their own. They’d have to  fit into a grab bag “Talons of The Emperor” book, which is basically what the Index is already. They represent a kind of gray area that has me wondering if they will show up in a Codex any time soon. 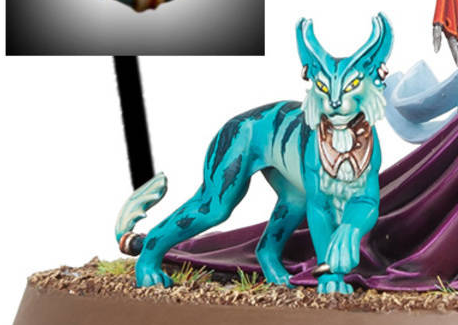 I can haz Codex?

Also missing from the list are Ynnari. Again a faction that raises an interesting issue. On the one hand, they don’t need a codex. They will essentially get 3 to pull from and be able to accesses some stratagems from a couple of them. Do they really need their own codex and stratagems?  On the other hand not giving the newest group in 40K their own Codex just seem strange. It feels like they should get their own book, but that it will be a while off then they can get a big model line released. Until that day, which could be years off, they may be out of luck. 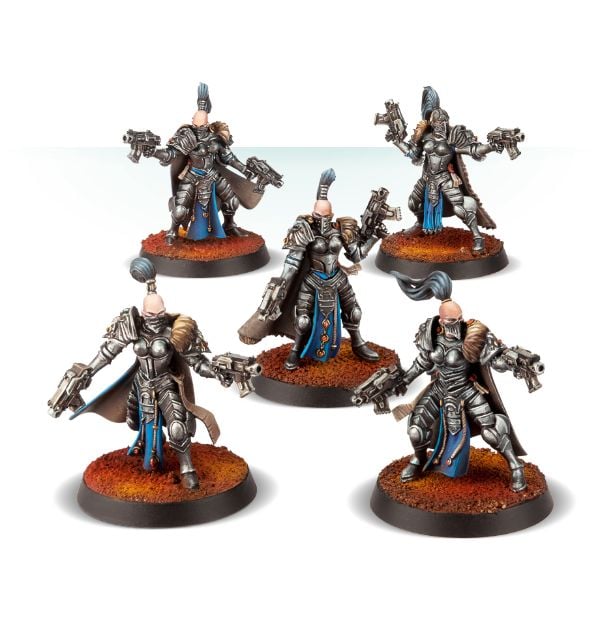 “Do the Sisters of Silence want a new Codex?” “I dunno, they haven’t said anything about it.”

So in conclusion: I think we can count on most if not all the real “factions” getting new codecies, (yes even Sisters) in 2018. For smaller, “sub-factions” that didn’t get updates in Chapter Approved I am worried that we may not get new rules for them in the foreseeable future. Given that these sub-factions are pretty minor this may not be much for an issue for most players. However it still seems sad to think that not everyone might get a new book. 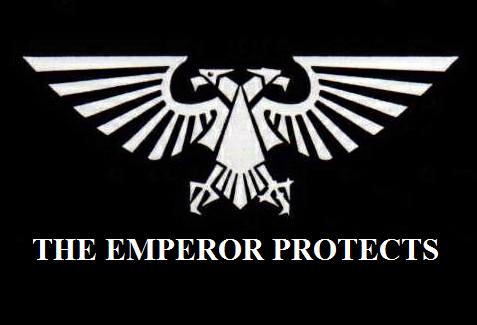 SO folks, what, if any, armies do you think won’t get books? Let us know, down in the comments! 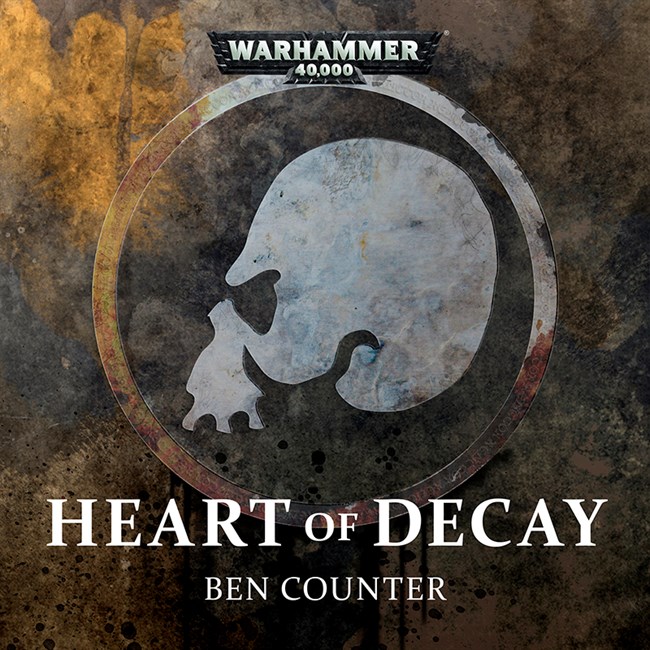