40K: Adeptus Custodes – The Best of the Best 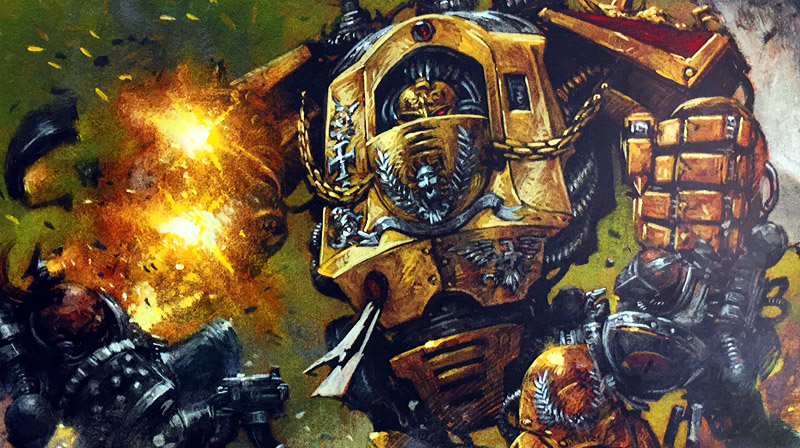 It’s time to look at the Elite of the Emperor’s Elite – The Adeptus Custodes Elite Slots are on deck!

We got a look at the HQ for the Custodes. We’ve seen some of the benefits for their Troops. We’ve even gotten a look at how their Fast Attack are going to impact the game. Today we’re taking a look at the Elite choices and how they are going to hold the line for the Emperor!

Sure that “Feel No Pain” on a 6 only has a(edit: Sorry got 16.6% and 1/6th crossed in my brain) 1/6th chance of happening – but when it DOES happen you’ll be thankful for it. The Wardens are also going to get to wield the deadly Castellan Axes. These weapons aren’t quite as good as piecing armor, but with a +3 boost the their strength of 5 (making them strength 8 attacks) they are going to be a threat to most vehicles and monsters. Plus the Wardens are also getting some more attacks than the Custodian Guard units. 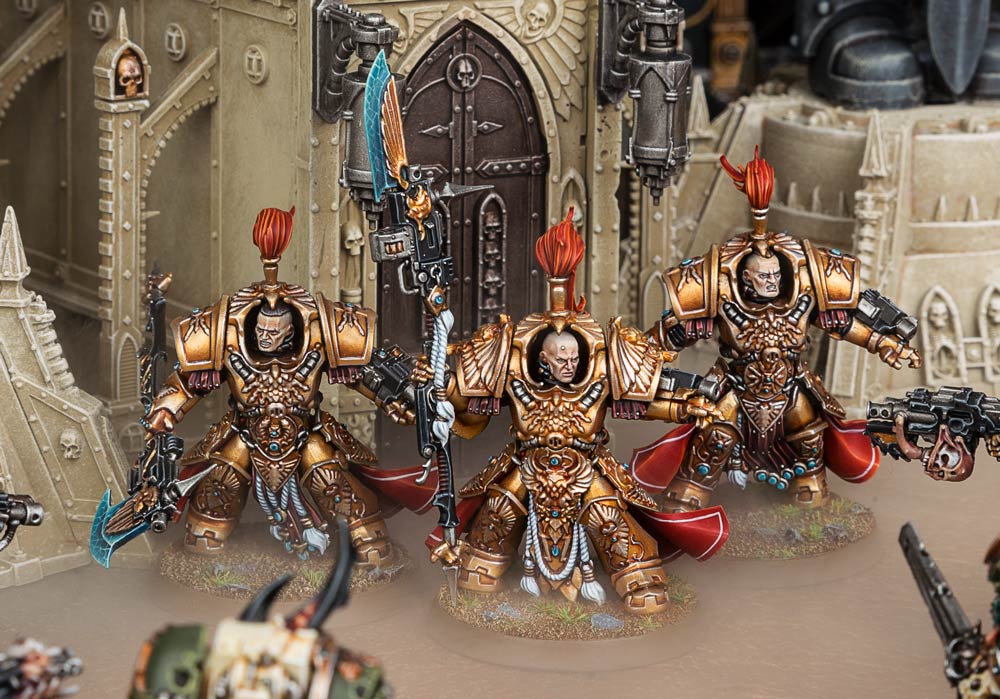 Now, about those Custodes Terminators – those are the Allarus Custodians and they are Character killers! not only do they have the boost of Terminator Armor, they also have 4 wounds and have the ability to teleport onto the battlefield. So what makes them deadly vs characters? The Slayer of Tyrants rule sure helps:

That’s not all – characters won’t be able to hide from them in the shooting phase either: 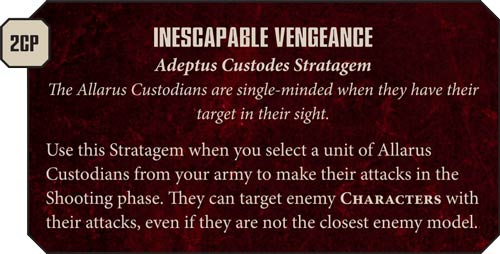 And finally, just to drive that point home each one of the Allarus Custodians can break off into their own single model units thanks to Unleash the Lions: 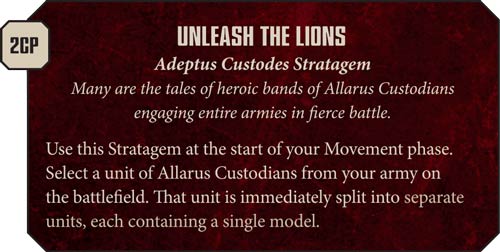 These Terminators can’t be bargained wth. They can’t be reasoned with. They don’t feel pity, or remorse, or fear. And they absolutely will not stop, ever, until you are dead! They are coming for your characters… 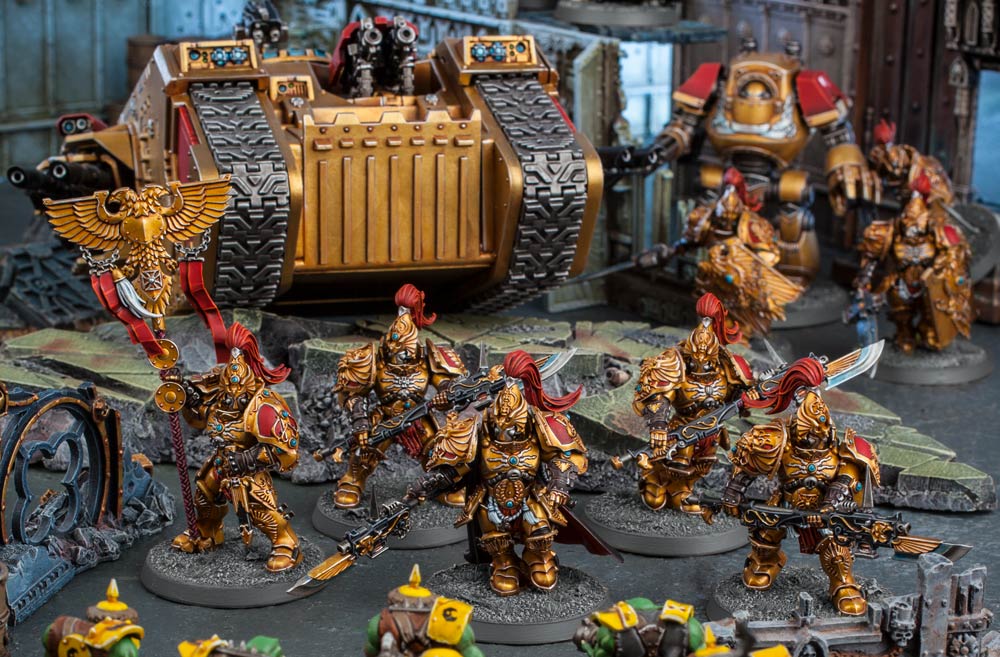 “The armies of the Adeptus Custodes have also received new support options in the form of Vexilus Praetors.These warriors bear the standards of the Adeptus Custodes into battle, designed not just to inspire those who fight around them, but infused with mysterious crypto-technological abilities that aid both the Golden Legion and the Imperial forces that fight alongside them.”

The Vexilus Praetors are also an Elite choice and they will have 3 different standards they can come with: 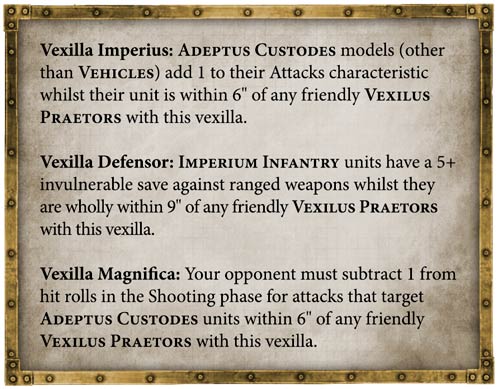 Notice Vexilla Defensor also applies to Imperium Infantry – that’s right! These guys will make Astra Militarum Infantry better along with all the other Infantry options in the Imperium. 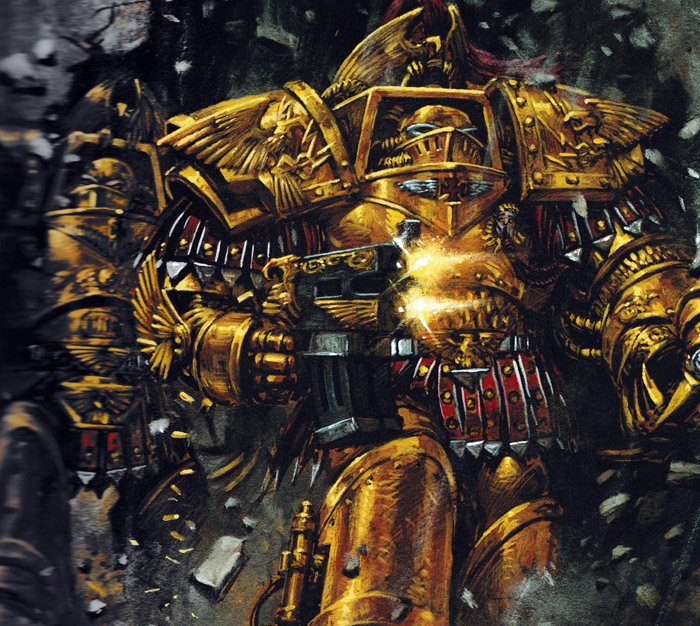 The Custodes are going to be the Best of the Best – are you ready for them on the tabletop?