We’ve gotten a look at all the remaining cards coming out in Armada Wave 7, here are our thoughts.

The other day the fine folks over on the FFG Star Wars Armada Forums got their hands on the new expansions for Armada Wave 7. In short there are a lot of amazing new cards coming out that we haven’t seen before. Here are my quick hot takes on the new cards we’ve seen. 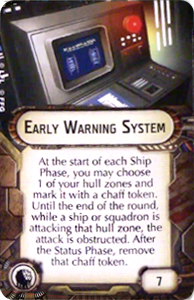 A pricey but amazing upgrade. This card allows you to, each turn, make one of your hull zones obstructed. That means that any attack coming out you is down a whole dice. While this will help against any attack, it’s particularly effective vs the death by a 1000 cuts type of lists. Low dice anti-ship bomber swarms and low dice attack long range shots are really hurt. Since it’s only for one hull zone it takes some positioning and can be worked around, but still a great defensive card. 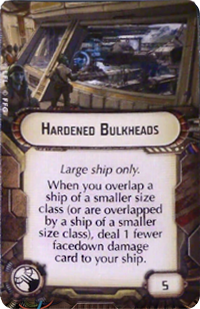 Do you like to run stuff over? Well then this is the card for you. A great way to counter ram-spam fleets and also just allow your ISDs to run over smaller ships without worrying. Not a game changer, but solid. 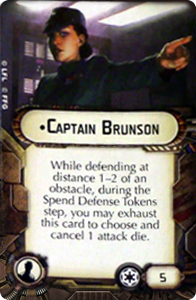 Another nice little defensive card. While this effect is a bit hard to pull off, and can only be used once a turn it is pretty powerful. Since it cancels a card it can be used to get rid of a nasty crit or an accuracy. 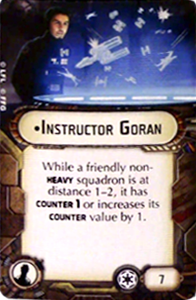 This card is going to allow you to build the ultimate fighter screen.  Now your defending screens are even better than before. Combine this with Dengar and your TIE Interceptors go up to counter 4. Feels like everything is coming up Soontir Fel. 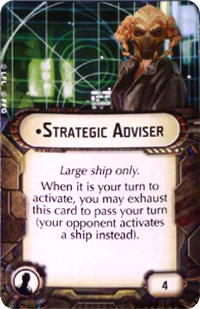 This is looking it might be the best card out of the whole wave, its pretty close to an auto-include in any list I’m looking at right now. In effect it gives you an entire activation, for 4 points, rather than the cost of a flotilla. While not as powerful in a single turn as Pyrce, its also easier to use and works over and over gain. While it’s limited to large ships, fleets with large ships are the ones that need more activation most.  This card is a real meta changes and will allow for 2-3 ship lists to really come back. 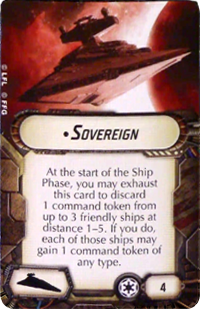 Grand Moff Tarkins Flagship comes to Armada, and its a pretty solid ship. Clearly positioned as a command ship it allows you to do some nice token swapping on your fleet. Of course for best use you need a fleet that can generate a lot of tokens, but thats not too hard these days. Seems like it has some nice potential. 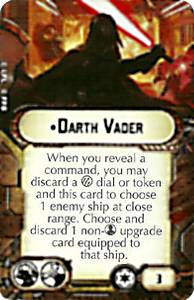 While eagle-eyed readers were able able to pick out Vader’s wording before, I don’t think he’s officially been introduced to us. While his ability is powerful, getting rid of an enemy upgrade card, it is costly and hard to pull off. At 3 points you are normally only going to be gaining a few net few points on the exchange, and you are giving up to awesome upgrade slots to do it. However if the enemy fleet is really based around a key upgrade you can utterly wreck them. (My favorite idea is getting ride of Rapid Launch Bays before the enemy squadrons can deploy). 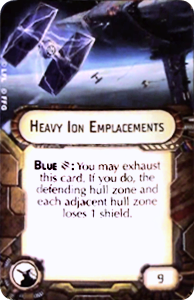 This is basically Assault Concussion Missiles but for blue dice. Sadly, while it does have longer range than ACMs, it also costs more and can’t do hull damage. A nifty option I don’t think it will edge out leading shots on most ships. It is tempting to try and use this and Fire Control Teams and and ACMs in a combo and get two shield and 2 regular damage to adjacent zones. 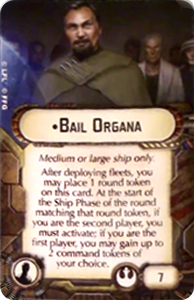 Organa is kind of like the reverse Pryce. Whereas Pryce lets you go last, Organa allows you to go first in one round. Again this is going to be a bit tricky to pull off, since you have to declare the round fire, but is still a very powerful ability. I bet we will see this card a lot. 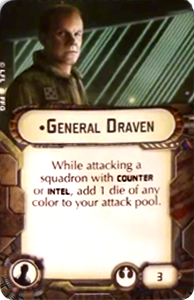 Darven is a great way to boost your anti-squadron firepower. Whats really interesting about him is that hes not very good in a defensive roll, bombers don’t normally have the needed keywords. He really wants to be used on an aggressive ship to clear out an enemy screen, and let your squadrons get to work. 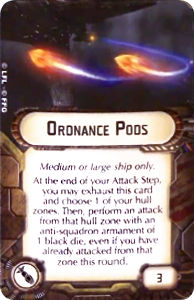 Another new and powerful card. These pods let you take a second round of shooting vs enemy squadrons. Since the attack is weaker, its best used paired with someone like Kallus or Darven, or Ruthless Strategists. This card does take up the coveted Ordnance upgrade slots but it will up your anti-squadron game to new levels. 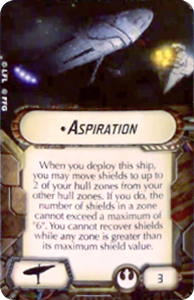 A solid title card for the MC75, this one allows for a little pre-game shield rearranging.  Amazingly it can allow you get your shields on one facing up to a total of 6! Of course a canny enemy could just ignore that arc, preventing you from gaining back shields, but played well this card could save you some hurt.

Well thats all for the new upgrade cards of the wave. Overall these are shaping up to be some great new options for the game as a whole. If there is a big winner in this wave, it is large ships. I’ve talked before about my worries about the vaiblity of large ships in the game, and it looks like FFG has already moved to correct those issues. I cannot be more excited to get my hands on these ships and try them out.

Let us know what you think of the new cards down in the comments!

Author: Abe Apfel
Abe is that rare thing, an Austin local born and raised here. Though he keeps on moving around, DC, Japan, ETC., he always seems to find his way back eventually. Abe has decades of experience with a wide range of tabletop and RPG games, from historicals, to Star Wars to D&D and 40K. He has been contributing to BOLS since almost the start, back when he worked at and then owned a local gaming store. He used to be big into the competitive Warhammer tournament scene but age has mellowed him and he now appreciates a good casual match. He currently covers 40K tactics and lore, as well as all things Star Wars, with occasional dabbling in other topics. Abe remains in mourning over the loss of WFB to this day.
Advertisement
Rules Star Wars Armada Tabletop News
Advertisement