Wave 7 is really the bomb.

Now that we know everything coming out in the new wave it’s time to start playing around with the fleets we can build. Personally I am very excited for both the Rebel and Imperial releases coming out. I’ve already come up with a Rebel list I’d love to try out, lets take a look at them. 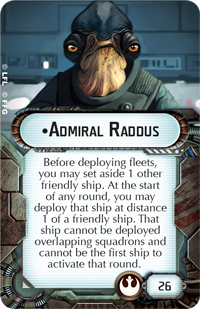 This list is designed to make the most out of Raddus’ ability. At the start of the game you will have only two stripped down CR90s, Shara and Tycho. It’s not much to go on and you’ll have to be careful not to get wiped out. However when the time is right you will be able to drop a very powerful bomb on the enemy lines. You can drop Profundity near one of your other ships, then drop the two b-wings and the Hammerhead off of it and go to town. On the turn it lands the MC75 can hit a target with 7 black and 2 blue dice from its front, and another 5 dice from a side  for a very deadly attack. The Hammerhead can throw another 6-7 dice and a face up from a ram and the B-wings get a few extra shots in. 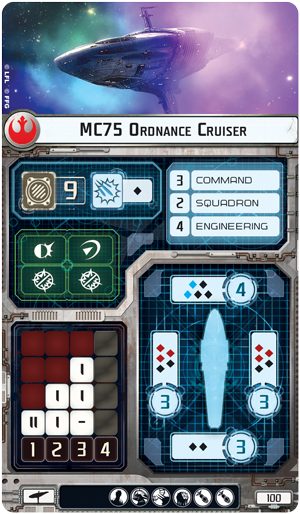 This list is really designed to hit a big enemy ship and just take them out. Though Profundity  can’t activate first on the turn it comes in, the Hammerhead can. The idea here is for the Hammerhead to go first, get a nice hit in then move so that the target ship will overlap it and be stuck, allowing the MC75 and the B-wings to finish it. You’ll most likely lose the Hammerhead in the process, but if you can trade a HH for an ISD or the like you’ll be winner.

The CR90s are mostly there to get you in position. I’ve given them Engine Techs so they can really boost around the enemy to drop the bomb off. Other than that they can add a few long range shots, and a surprise ram or two if needed. Keep them safe early game or it’s all over.

I’ve gone for a pretty big points bid for first player. The idea is to make sure the bomb can really ruin the enemy when its deployed. You could drop the bid down for a few more upgrades and it might be ok.

Obviously this list is betting a lot on the big drop working out. This would be a very easy list to get tabled with if you’re not being careful.  It’s a risky list but could be give you some surprising victories.

Let us know how you plan on using Wave 7 Rebels down in the comments! 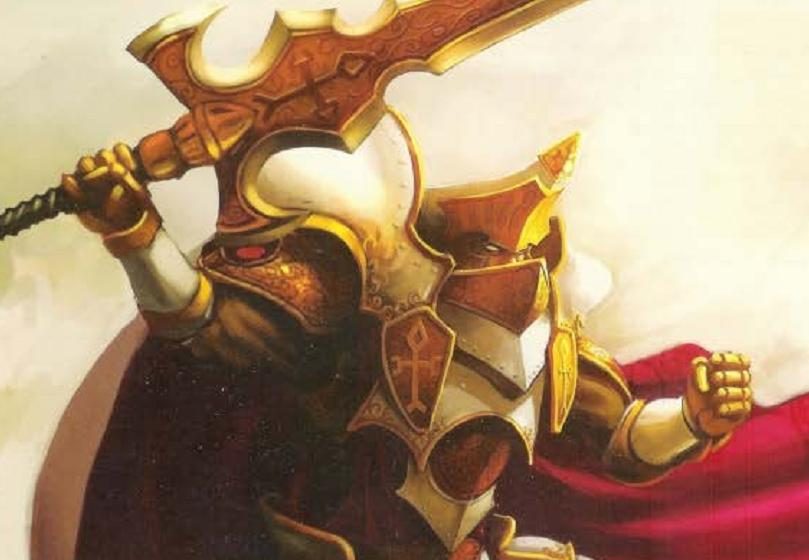