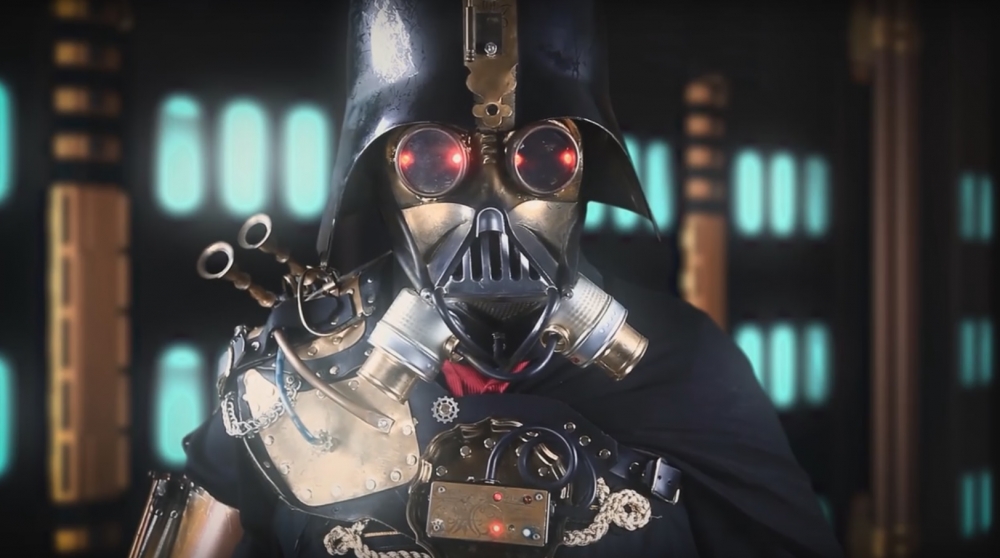 Brand’s Great Company has forged a gorgeous set of Space Wolf Armor to honor his passing. This week we’re going to feature one of the artists who helped make that possible, an artist with a passion for steam and a mechanical heart of gold.

This month we are continuing our tribute to Brand’s Great Company, and the artists and cosplayers who stand among their ranks. Recently a gorgeous set of Space Marine armor was completed for Brand, and I wanted to take a moment to truly appreciate the kind souls behind its creation. We will soon feature the armor build itself, but first… We power forward into the world of Steampunk, featuring another artist from over the pond. Enjoy the work of Hatton Cross Steampunk! 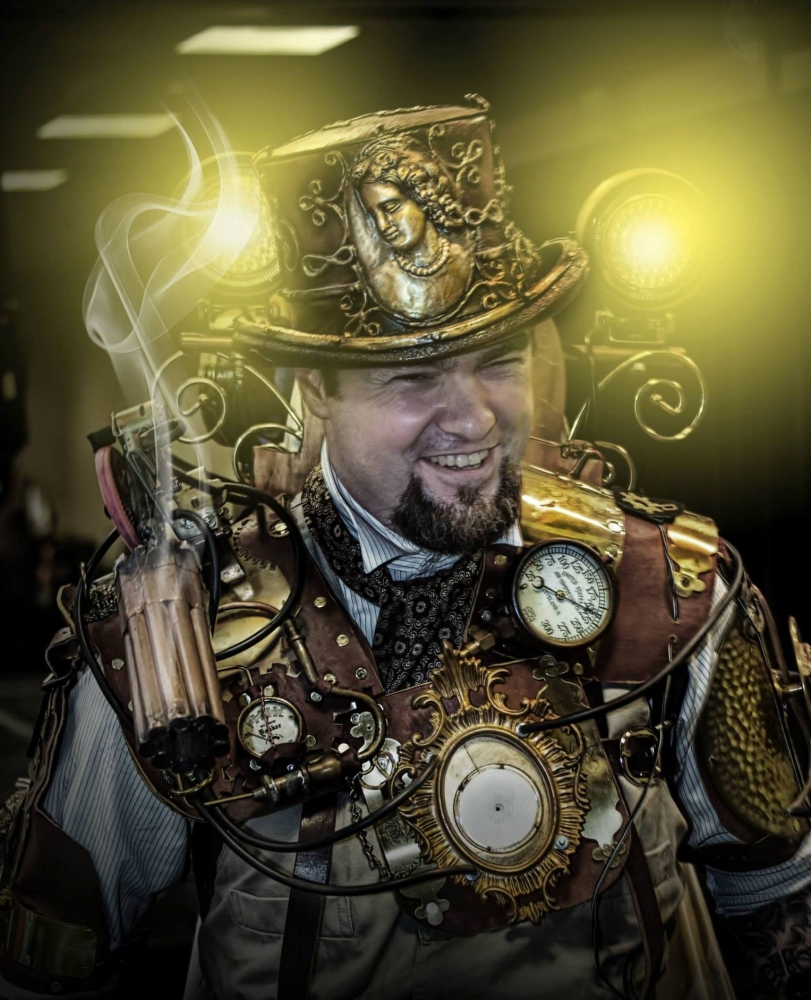 I suppose it was when I got into Steampunk that I first started working on cosplay projects. It’s sort of a gateway cosplay drug if you will. This was roughly 9 years ago. About 4 years ago I discovered Warhammer 40k and have been hooked ever since. I suppose the creativity and challenge of creating wearable art is what inspires me. I am simply addicted to making armor and have a long list of things I will do next. 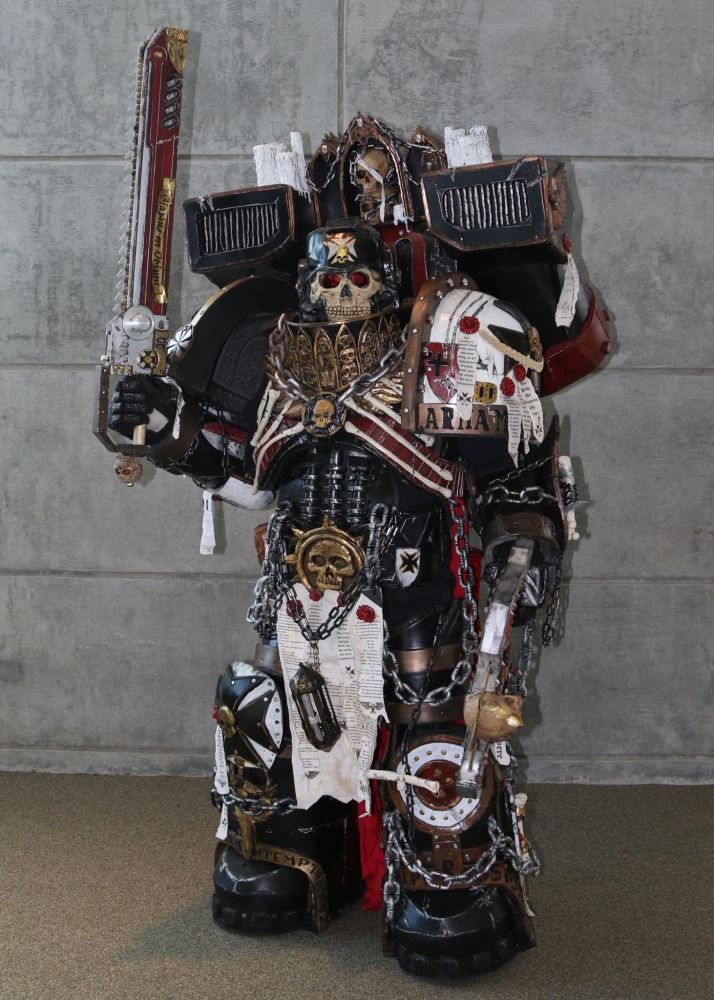 I feel I am more of a jack of all trades, master of none. I’m very stubborn and like to challenge myself. If I don’t know how to do it, I really enjoy the discovery and experimental phase of it. If I had to pick one thing that I excel at though, I’d have to say attention to detail. I have some projects with details that only a handful of people will ever see or even get. I know it’s there and it gives me a sense of satisfaction to know that the level of effort and detail went into it. I’ll give up one secret to illustrate; In the breech cloth of my Black Templar Chaplain, there is text in Latin. On the left side is the text to Drowning Pool’s “Bodies” (in Latin) and on the right side is the text to Rick Astley’s “Never Gonna Give you up”. In the event that I run into someone that can read Latin and understand it, I will have Rick Rolled them. This amuses me just knowing that it is there, waiting like a lion with big hair and a deep voice. 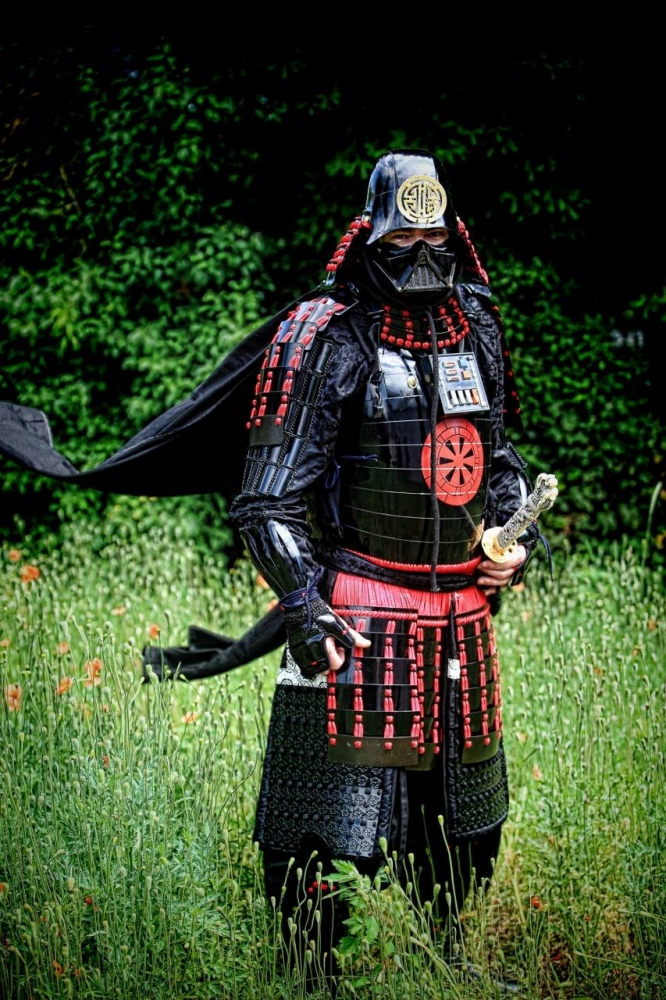 I love armor. There is just something about creating a character or a replica of a character with amazing armor. I think I love Warhammer40k so much because there is no other artwork that speaks to me as much as it does. The detail possibilities are phenomenal.

My favorite is my Black Templar Chaplain. It certainly gets the most attention. I’ve made a lot of steampunk vehicles as well so for that, I’d say the Gentleman’s Armored Battle Carriage is my favorite. It was a family project with my Dad, brother, wife and daughter. It is priceless to me. 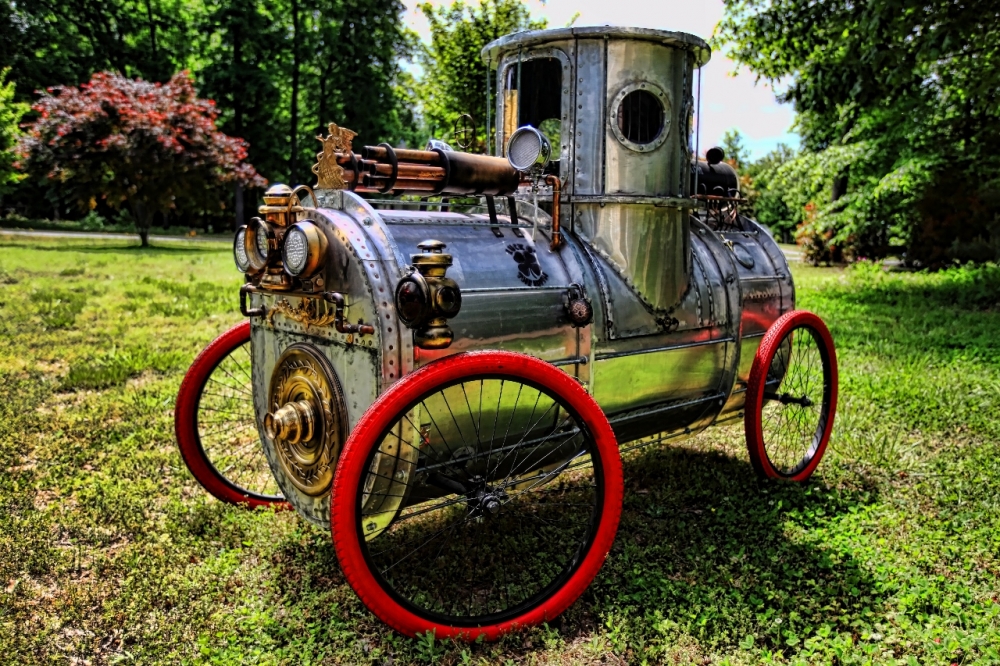 I like working with everything. In steampunk it’s lots of brass, copper, leather, etc. but with the non-steampunk cosplay it is predominantly EVA foam. Aside from the super insulation powers it possesses, it is lightweight and very easy to work with. I love it but only if it is accompanied by it’s sidekick Plastidip. 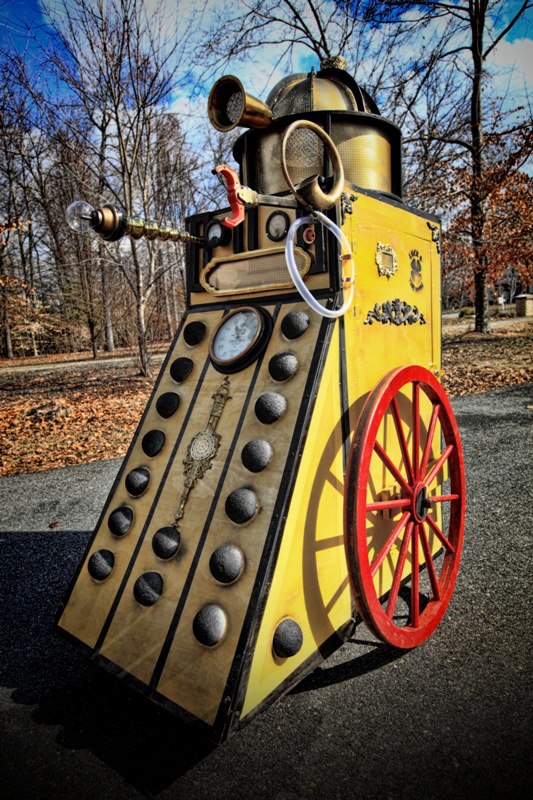 I don’t game much as I am usually in the workshop knee deep in projects. I’ve always loved Diablo II though and intend to get into Warhammer 40k tabletop when I hit the lottery. That shit is expensive! I have the gamers say to me almost every convention, when they see my Chaplain armor, “that looks almost as expensive as the miniatures”. They are not kidding.

I attend a lot of conventions, mostly steampunk ones. I have been a guest at close to 70 conventions in the US, Europe and New Zealand. Last year I was in the Netherlands and this year I’ll be in England. Hoping to get back to New Zealand next year again. Most of the time I’m there as a maker guest, with the steampunk vehicles and cosplay props but often I’m a literary guest due to my novel, novella and anthology. 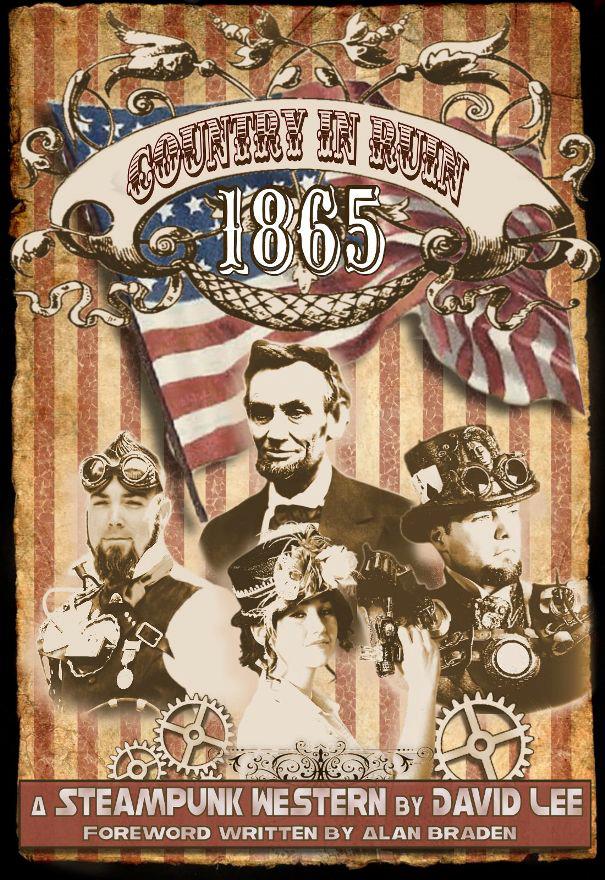 We have a few more Space Marine suits in the works. I have to build mechanical wings for my daughter’s St. Celestine armor and a Gundam for her boyfriend Jordan. We also have a few vehicles planned.

I will be in New Jersey this weekend, Morecambe England, Detroit, Frederick Maryland, Troy NY, Red Hook NY and Atlanta for DragonCon. I’ll be attending DragonCon as an “attending professional” which will be my third time there as that. I love going there, such a plethora of amazing costumes to see and one big 4 day party. 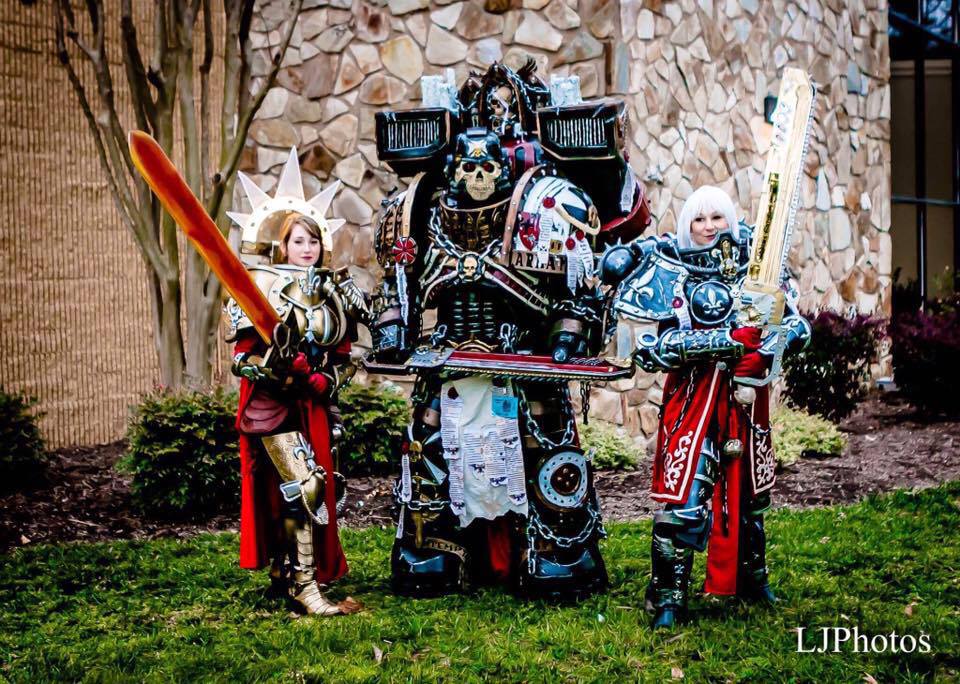 I am truly inspired by a guy named Arthur Millican Jr. He is a former Disney guy and just an amazing creator. For cosplay, I love digging through all the projects on the Obscuras Crusade FB page and their forum.

I listen to a lot of music when I craft, mostly Squirrel Nut Zippers or Andrew Bird. Sometimes if I’m really into a Warhammer project then its metal, like Lamb of God. 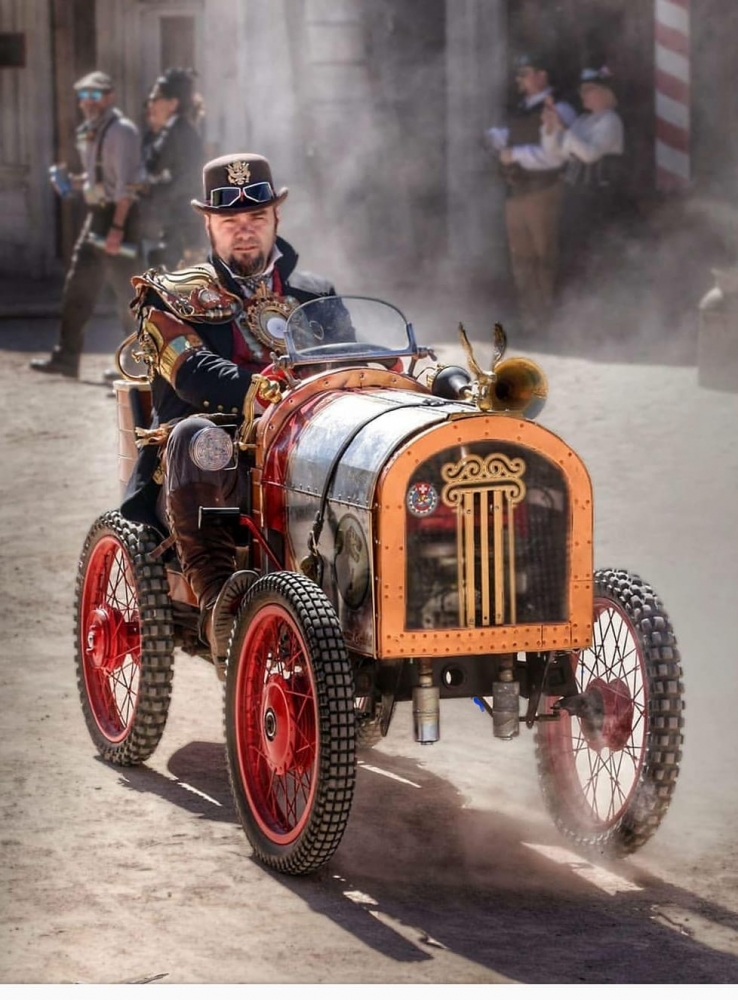 Just do it. Don’t be afraid to try it out, know that your first attempts will not be pro level but each attempt after that will get you closer. Ask people questions but do not ask them to do it for you, unless you are trying to hire them. Never say “but it will give you good exposure”, people die from exposure. Unless you are Stan Lee, doing a freebee for you won’t do them squat. I’ve learned that anything is possible, you just have to keep working on it and have fun with it. If it’s not fun then you won’t be your best at it. 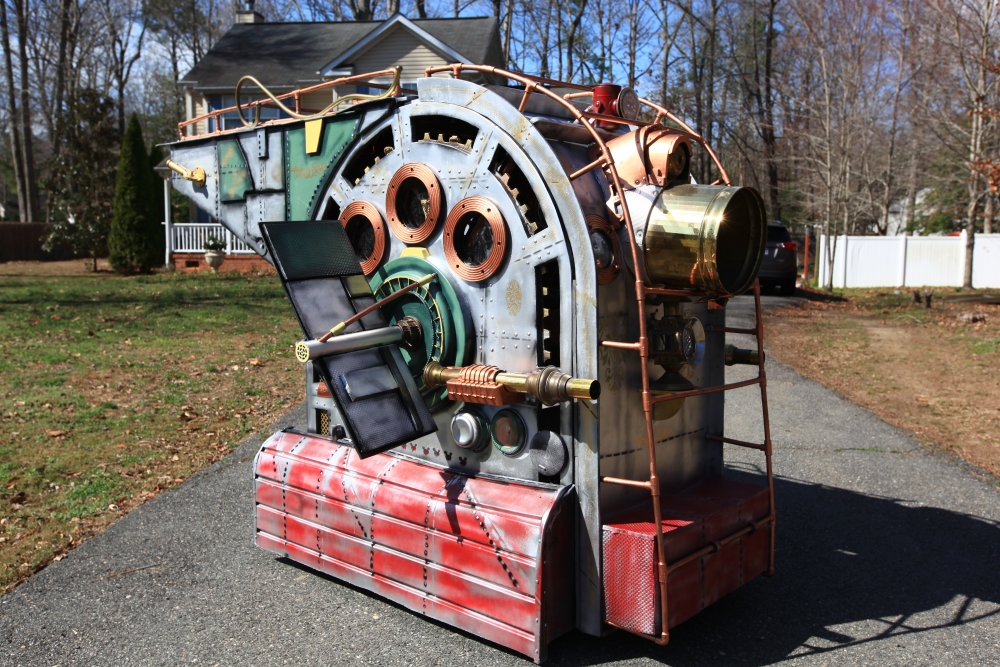 Author: Jennifer Larsen
Jennifer Lynn Larsen, aka "Mayhem's Muse" is originally from the Seattle area of Washington State. She is the Cosplay Editor for BoLS and manages Ad Sales and Communications as well. Her cosplay awards include the RTX Judge's Choice Award and Dragon's Lair Austin's Cosplay Symposium. Jennifer has been a Cosplay Guest Judge at RTX, Tacticon, and Genghis Con in Colorado. She regularly attends conventions to cover cosplay for BoLS. Her cosplay work has been featured in Girls Who Love Monsters, Geek Fuel, Renaissance Magazine, and other publications. Jennifer has modeled in the Her Universe Fashion Show, Precision Camera's yearly Precision Camera University, and has taught several workshops for photographers about partnering with cosplayers and creative muses/models. For BoLS, Jennifer covers everything from video games, fantasy, comic books, to sci-fi and historical garb. She is a lifelong enthusiast of retro video games and loves Dungeons & Dragons, urban fantasy, tabletop games, VR technology, and historical archery. Jennifer has set several National Records through USA Archery’s Traditional Division for Asiatic Bows and earned 4th Place in the World Nomad Games in Kyrgyzstan in 2018 for Women’s Korean Archery. She is currently studying at Denver University for her Masters Degree in Organizational Leadership.
Advertisement
Charity Cosplay Warhammer 40k
Advertisement