Elements of a Hero in ‘Sentinel Comics RPG’ 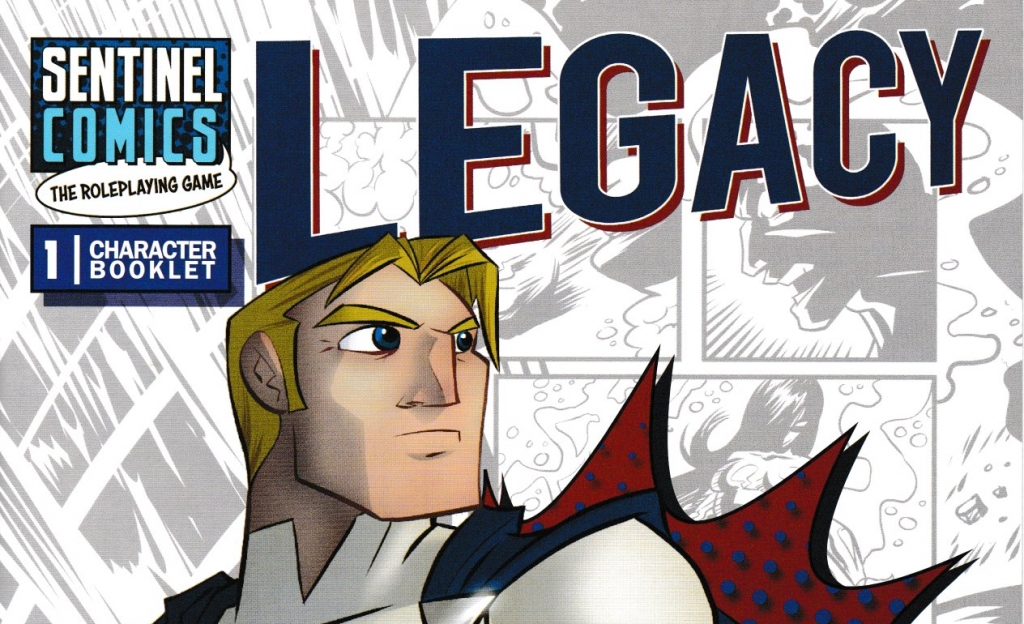 What makes and breaks a hero? Today we break down the pieces of a Hero to figure out what makes them tick.

Welcome back to another look at the Sentinel Comics RPG. If you caught the last issue, you’ll know we went into a few details regarding gameplay and the mechanics. Today, we’re going to go over the entirety of a character sheet as well as all the additional rules which come along with that.

Each character sheet is two-sided. The front with most of the role play aspects and the backside having all the dice rolling information. 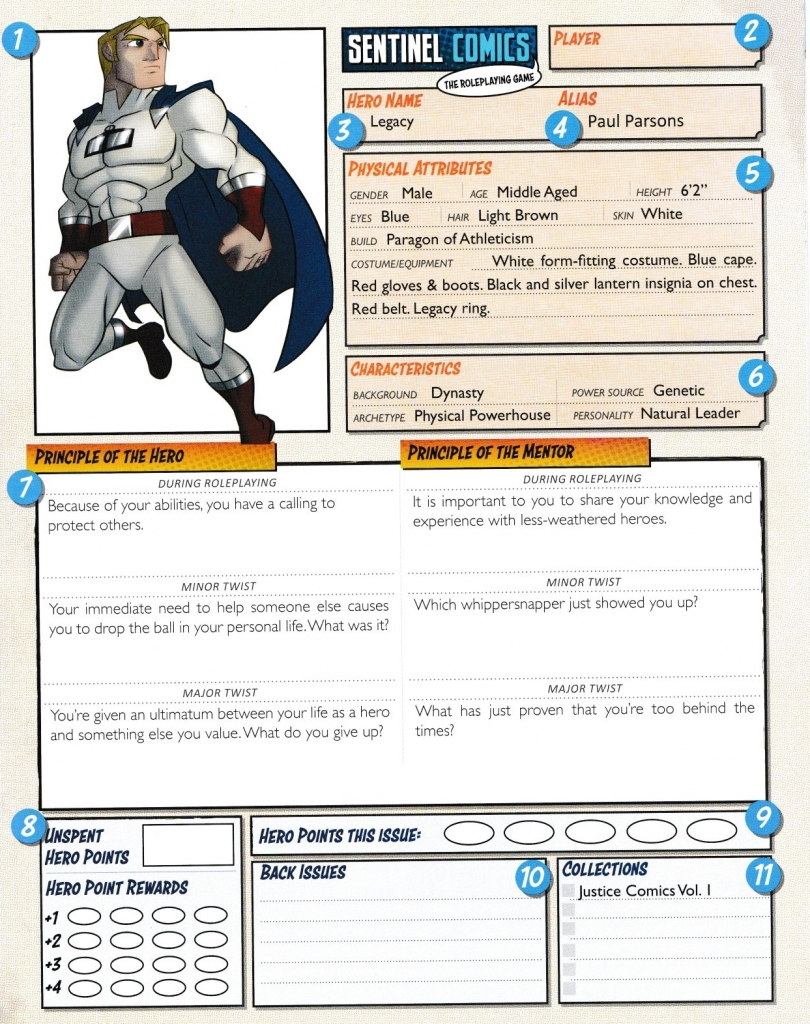 Makes handing out character sheets at the start of each session easier.

What do you go by?

What do your parents call you?

For people who can’t draw well or can’t find a good picture online.

This provides some information on who your hero is as a person. Where they came from, where their powers come from, what sort of hero are they and what’s their overall personality. 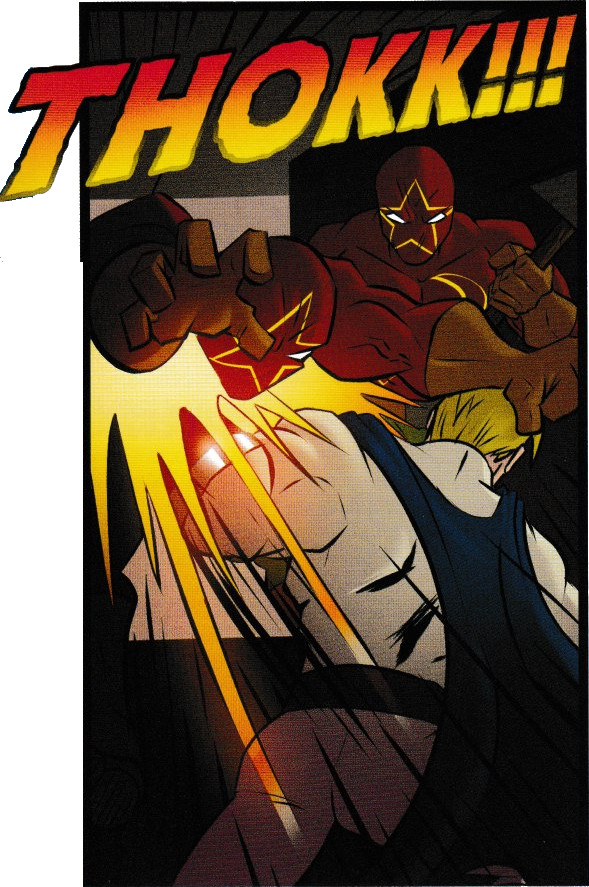 Within each of these principles, the player should describe how best to roleplay that principle as well as some examples of how the principle might manifest during a minor or major twist. Principles are meant to help drive character decisions. It’s possible that your Principles will push your hero towards less than optimal decisions, but it will at least make for interesting decisions.

To help blend the Principles into the action, each hero has a Green ability linked to each of their Principles. We’ll get to that in a bit.

Each time a hero uses a Principle ability in an Overcome action (even if the action failed), they will gain Hero Points. Hero Points are accumulated throughout each ‘issue’. Each game session of Sentinel Comics RPG is called an issue and actually is utilized within gameplay.

Players are encouraged to call back to the previous issues to explain these bonuses. Maybe a +3 Bonus is a “favor from the mayor” when applied to an Overcome roll to convince a city offical to help you. 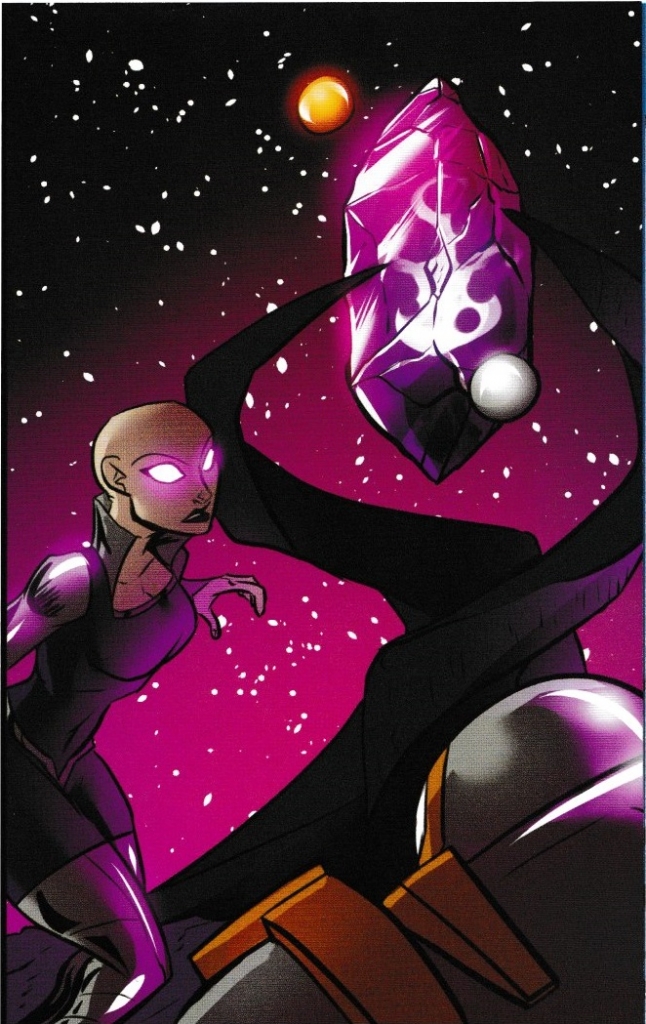 Each hero can only accumulate up to 5 Hero Points per issue, so these ovals mark each time a Hero Point is gained per issue then cleared after the issue ends.

After each session the players give the issue a name and number and record it here. This will be used to build a Collection.

Once a hero has 6 Back Issues, they are gathered into a Collection and given a name. Collections, similar to Hero Points, can be called upon to help the Heroes out in a time of need once per session.

Anytime a player calls upon a Collection, they should try to build the story in some meaningful way. Sentinel Comics RPG is all about the story and Collections are a great way to build a character’s backstory after the fact. 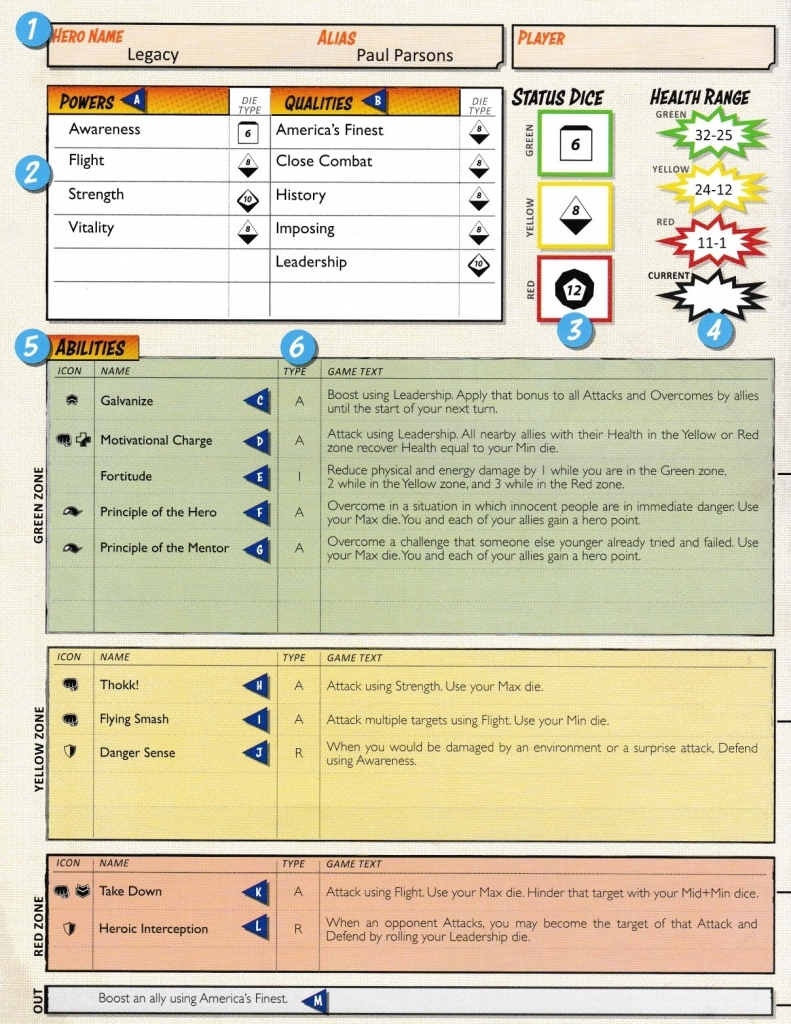 “Repetition is the path to mastery” – Tekhartha Zenyatta

We discussed this last time, so I won’t go over it again here. But basically, it’s a couple thing your hero is real good at.

But to at least keep it new and exciting, here’s the flavor texts for Legacy’s Powers and Qualities. 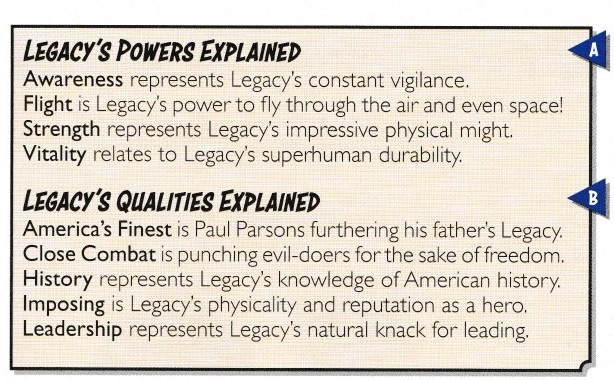 We also kinda touched on this last time but we’ll go into a little more detail.

Notice that Legacy, the stalwart and inspiring leader increases his die size as his Status goes from Green to Yellow to Red. This is certainly not the case with other heroes.

Unity’s dice size decreases as her Status does, which is typical for most other heroes as well.

Lists your Health Status thresholds as well as your current Health.

If your Health reaches 0, you’re Out, but still not useless. When a Hero is Out, they only have access to their Out ability, which is usually to the benefit of their allies in some manner.

Abilities differ from Actions in they are more specific to how the hero would perform the action, they also provide additional bonuses to the roll or the effect. Abilities still use a certain Action as their basis, but how the results play out will often differ.

As we mentioned before, each Hero has 2 Principle Abilities which grant Hero Points when used.  You’ll see them listed in the Green Zone. Also, if you use one of the premade heroes which comes with the starter kit, you’ll be provided some fun flavor text for each Ability, explaining what the Ability entails and providing some visuals. 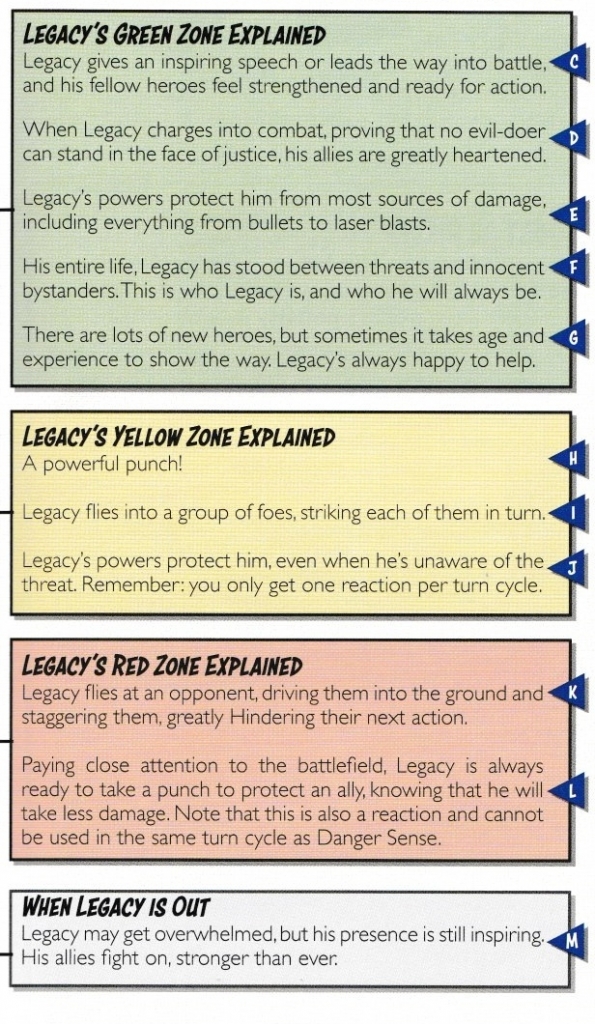 Ability Type breaks down into 3 types:

Action Abilities are based off of using one of the 6 basic actions we talked about last time. The type of action used for the ability is denoted by the accompanying icon.

Reactions are similar to Actions but only happen in response to something else happening.

Inherent Abilities are less common but can be a constant effect on the hero or a triggered response to something else which occurs whether the hero wants to or not. For example, Legacy has the Fortitude Inherent Ability which reduces damage he takes based on his Status.

I really like how Sentinel Comics RPG melds roleplay into the action scenes so well with things like Principles and Collections. It’s a great foundation for some fantastic story telling and calling back to some crazy event becomes not only a great opportunity to reminice, but to actually help you out of your current bad situation.