Privateer Press: May Releases For Hordes 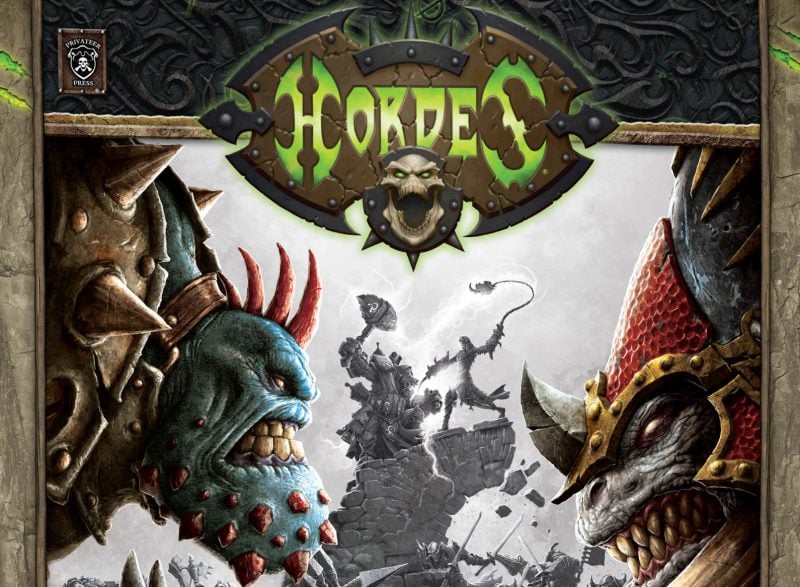 Privateer Press has a big batch of baddies heading to a tabletop near you! The Legion is getting some big reinforcements this month – and they are looking pretty mean! 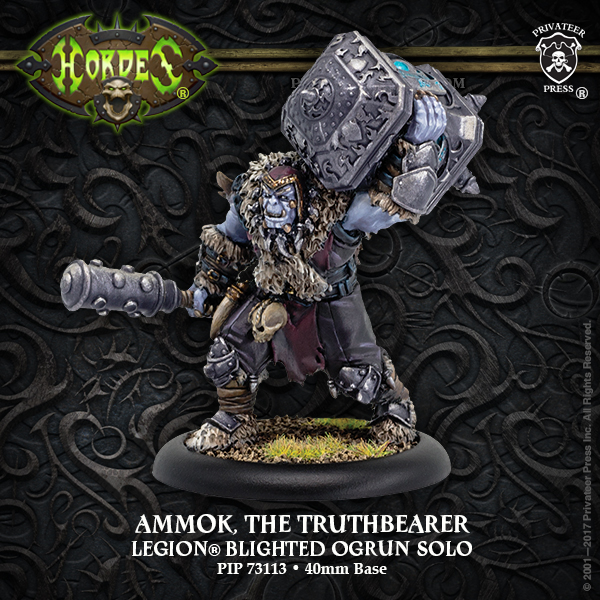 Speaking in the tongue of a mad seer, the Truthbearer prophesies destruction for the enemies of Everblight. His burden oozes a miasma of blighted energies that corrupts all that it touches. Graven with runes whose true purpose was lost with the fall of the Black Kingdom of Morrdh, this is the Malihedron. Ammok’s madness shields him from its power, and he chants deranged prayers as he marches into battle holding it aloft. 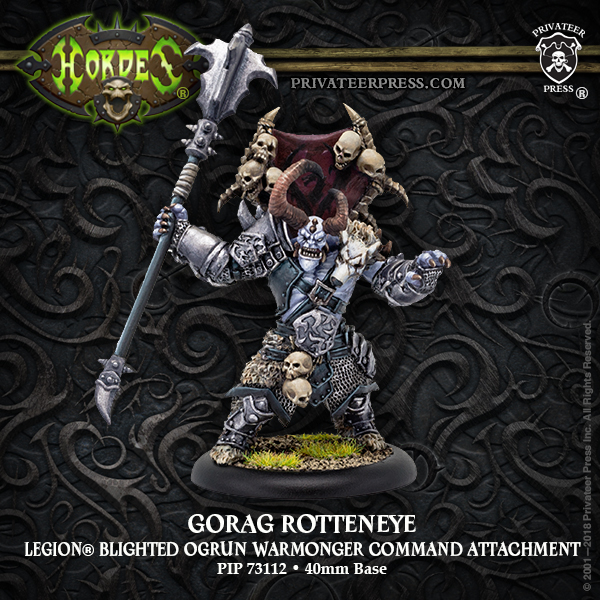 When he first received the blight, Gorag suffered a ceaseless blinding pain in his right eye. After three days of agony, he gouged out his own eye in a rage, leaving a bloody wound that would never heal. His transformation bestowed a different gift to compensate—the gaping socket now emits a wicked, blighted radiance. All who fall under his withering gaze become enervated, as blighted energies radiate through their bodies. 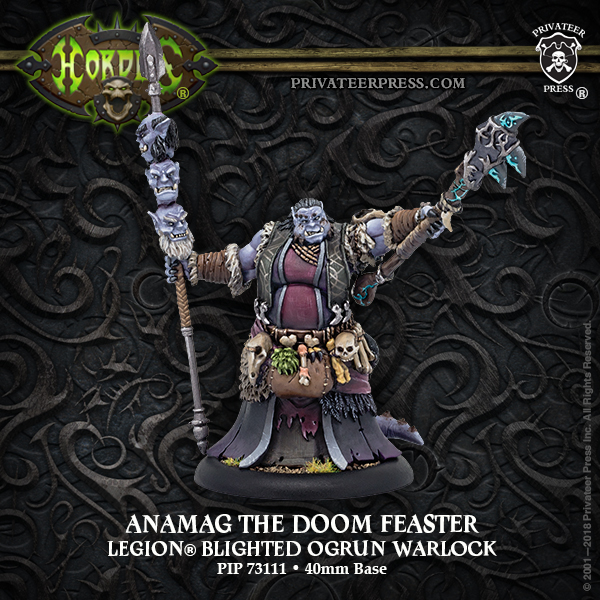 The bloated, putrescent warlock called the Doom Feaster is a scourge upon western Immoren. Once an elder of the Stonemark clan of ogrun in the Bitewind Peaks, Anamag changed with the coming of Thagrosh. When she was touched with blight, it filled her with insatiable hunger, making grotesque that which once drew her to Dhunia. Her sons and daughters became warmongers who slaughtered and died in Everblight’s name. When Everblight saw fit to forge Anamag into a warlock, she became the Doom Feaster, and each body she devours magnifies her arcane prowess. 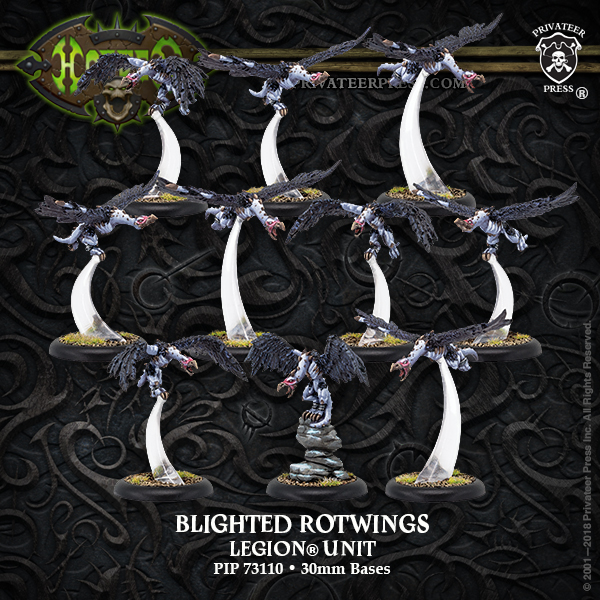 Flocks of scavengers called rotwings follow the bloody trail of the blighted ogrun, subsisting on the carnage they leave behind. Rotwings ingest large amounts of blighted flesh from fallen dragonspawn and ogrun, causing the birds themselves to become blighted. Their powerful beaks easily rip flesh and muscle from carcasses and can crack open skull and bones to reach brain matter and marrow. 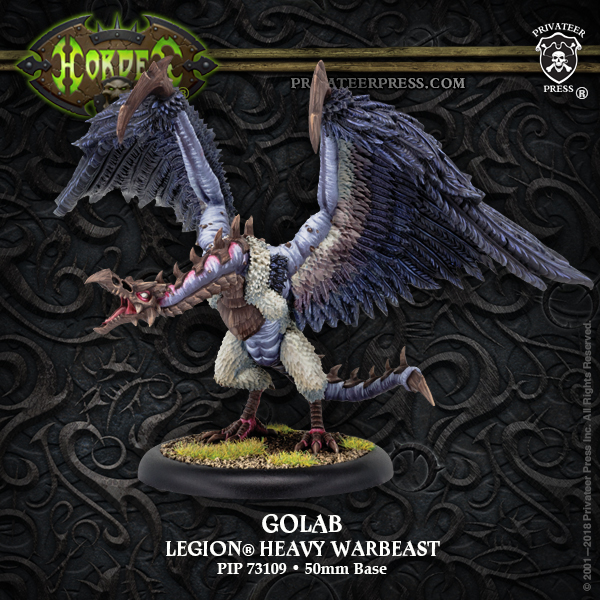 With a gargled shriek, the unclean beast Golab dives from the heavens to feast on the flesh of the dead and the dying. A favored pet of the ogrun seer Anamag, Golab is a terror to behold in battle. It shreds prey apart with its talons before feasting upon its prey’s open wounds with its oversized beak. Blighted energy permeates the beast, sickening nearby foes and withering any restorative magics in its vicinity.

That’s a whole lot of Legion Love coming in May!

Author: Adam Harrison
Writer, Editor, Texas Native, and Austinite for 15+ years, Adam covers all things Tabletop Gaming. Which includes Warhammer 40,000, Age of Sigmar, D&D, Board Games and everything else that involves dice, boards, cards and a table. A hobbyist, player, and collector of miniatures and games, Adam's current obsession are his Death Armies for Age of Sigmar, his Blood Angels and Tyranids for 40k, and his ever growing Arkham Horror: The Card Game Collection.
Advertisement
Miniatures Privateer Press Tabletop News Warmachine-Hordes
Advertisement