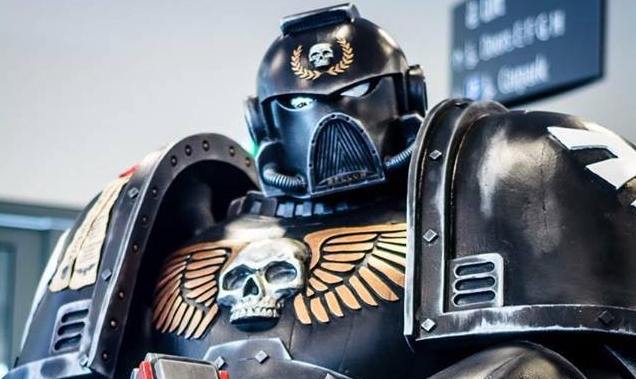 BeCosplay might have started out as a game night hangout but it has become something more – come meet the fantastic Cosplayers of BeCosplay!

They say that gaming circles make the best build buddies, and this week we’re featuring a group that proves it. BeCosplay started as a game night hangout, then developed into a sewing circle of the apocalypse: a Warhammer 40k inspired group that features Space Marines, Sisters of Battle, and much, much more. Enjoy the work and journey of BeCosplay!

I started in cosplay in December 2017 after going to the Supanova convention in Brisbane QLD in November. My wife and I saw some amazing costumes that were simply awe inspiring, and we decided then and there to attend the next event in our own costumes.

Two other friends (John Anderson and Ross Langford) and I would hold a boy’s club every alternate Friday where we would play VR games on my HTC VIVE, drink beer and eat pizza as a form of relaxation and de-stressing. Obviously you can only play so much VR (favorite game is Sairento) before you want to change things up and get constructive. I mentioned to them the idea of making cosplay costumes for conventions as an alternative to chillaxing and wasting our Fridays; they jumped at the idea. I put forward the space marine costume as a choice and so “the project” was born. One of the deciding factors in creating a space marine costume was that I didn’t have to be in “super hero” shape to look good (and I always liked the look of them even though I have never played the game). 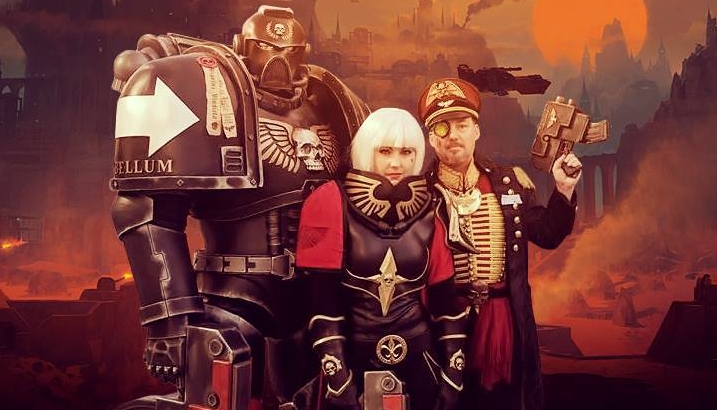 I began researching and gathered resources such as plans, photos, pictures, lore, 3D models and much more from many different locations on the net. I had no idea how to proceed, but I was determined to build one. My first inspiration came from Gary Sterley’s Space Marine, which is one of the well known ones on the net. He had an incredible build log that described a lot of what he had done and this helped launch things off for me. I then found some pepakura plans for a life sized space marine costume on Obscurus Crusade from JFcustom and used those as my initial start point.

The foam was the next problem. Where to find it and what type to use? After contacting several suppliers and getting samples, I settled on EVA45 sheets from pjbowers.com.au on the Gold Coast. The foam was a good density and still flexible enough to craft. They also had the correct glue available to use on that type of foam.

Now with supplies, plans and tools it was time to cut. This was daunting and after watching several foam cutting tutorials on youtube, I drew out and cut the first piece of the first boot and the rest is history.

Unfortunately due to money and time limitations, my 2 friends could not fully participate in the project and so helped where they could.

It took 3 months to complete the first space marine suit. 4 weeks before the event I still hadn’t started on my wife’s Sister of Battle costume. We decided to go with the Sister as a compliment to my outfit. At this point she off-handedly said “wouldn’t it be good to have 2 space marines for the event?” I took this to heart and spoke with John Anderson about funding the construction of his suit in time for the Gold Coast Supanova convention. He jumped at this and so I burnt the midnight oil, and with the help of Ross, John and my wife Bec, finished the second space marine and the Sister of Battle costumes with 2 days to spare.

Inspiration comes from the cosplayers, the photographers, the patrons, family and friends and above all, the fun of dressing up! 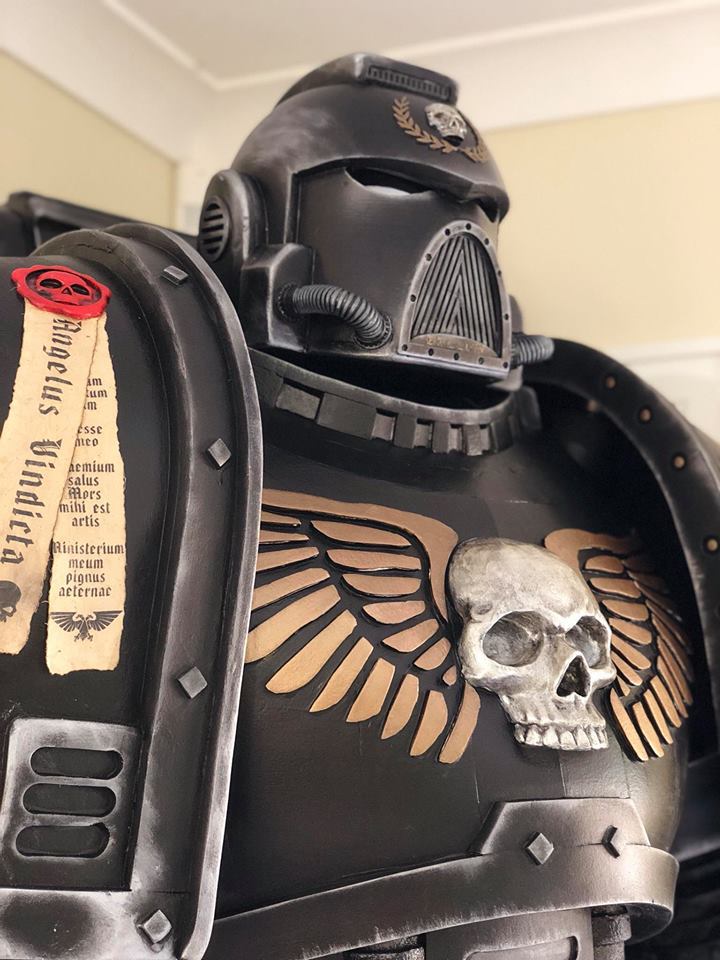 3D design and foam work but my repertoire is constantly expanding as the need for more and better skills are needed.

Hard to say. I’m learning new and better skills every day. The latest is foam moulding for shape and detail. 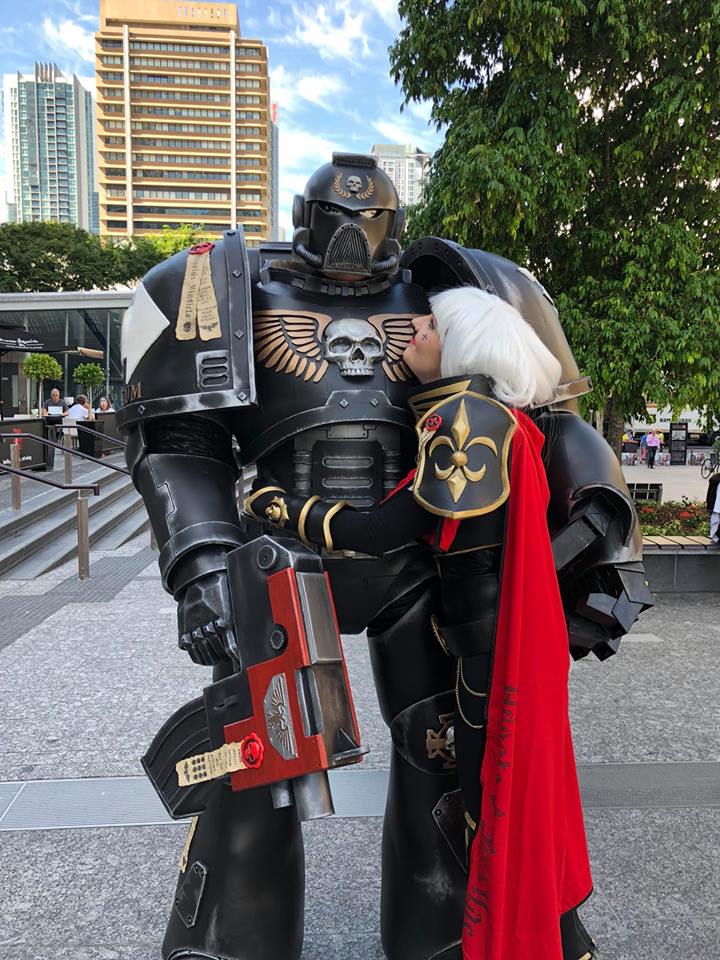 Obviously the only ones we have currently…… SPACE MARINES!

Currently EVA foam but I want to expand into latex and cloth. 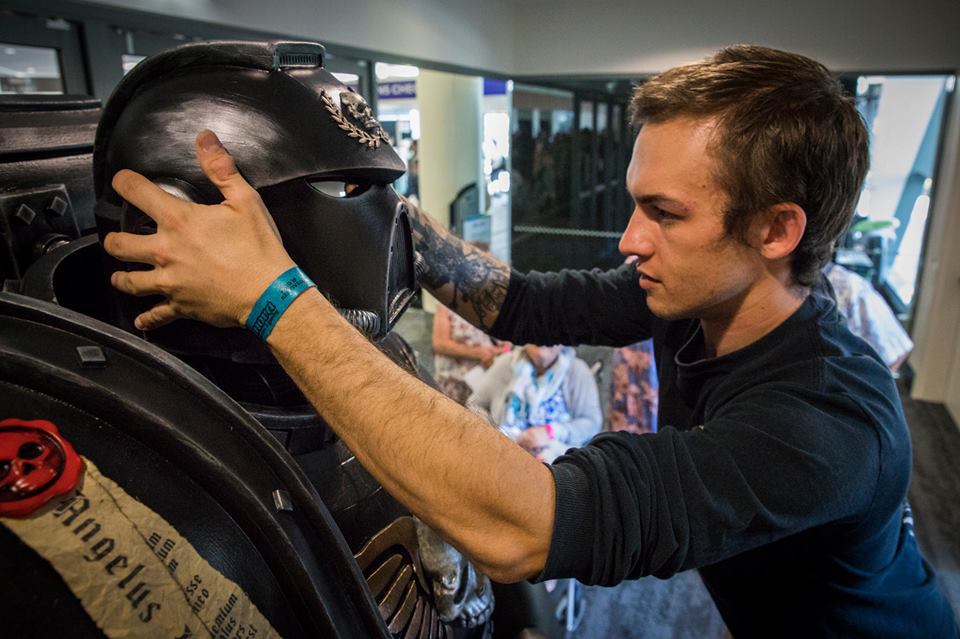 Warhammer 40K (even though I don’t play), Star Trek, most sci-fi and even some anime.

World of Warcraft, Overwatch, other FPS style games and SAIRENTO on HTC VIVE. 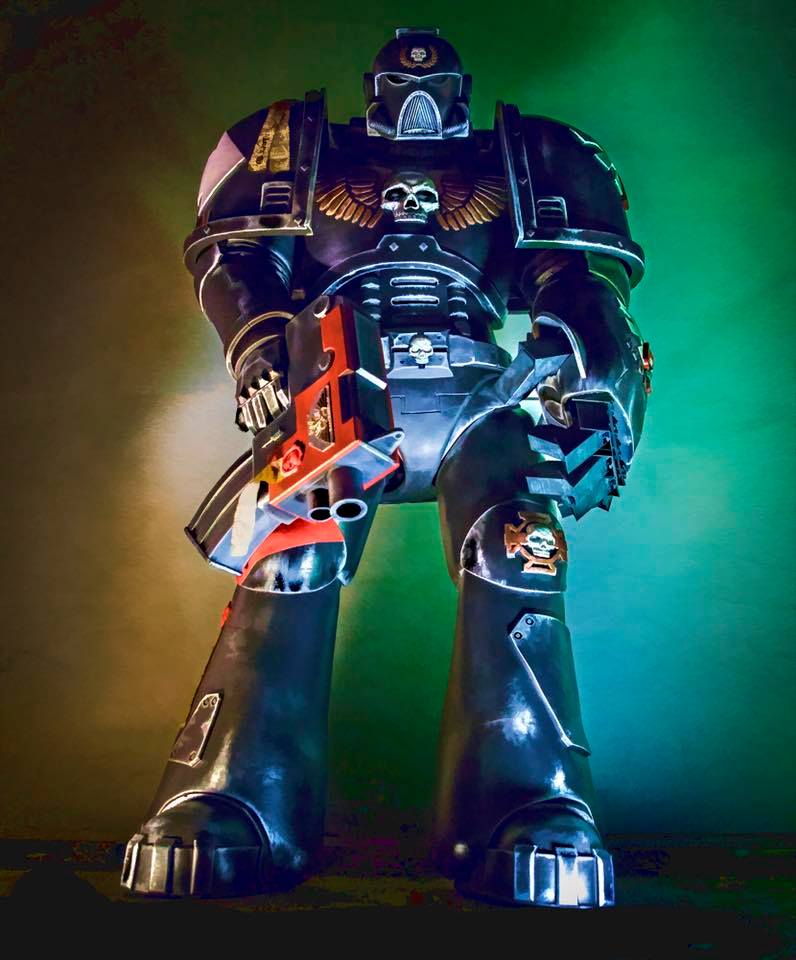 We have only attended the one convention at Gold Coast Supanova and entered in the cosplay contest on Saturday. We took out BEST GROUP on our first outing!

Current project is a couples costume. A stormtrooper / space marine hybrid with a big ass rotary canon and a sexy bounty hunter for my wife. 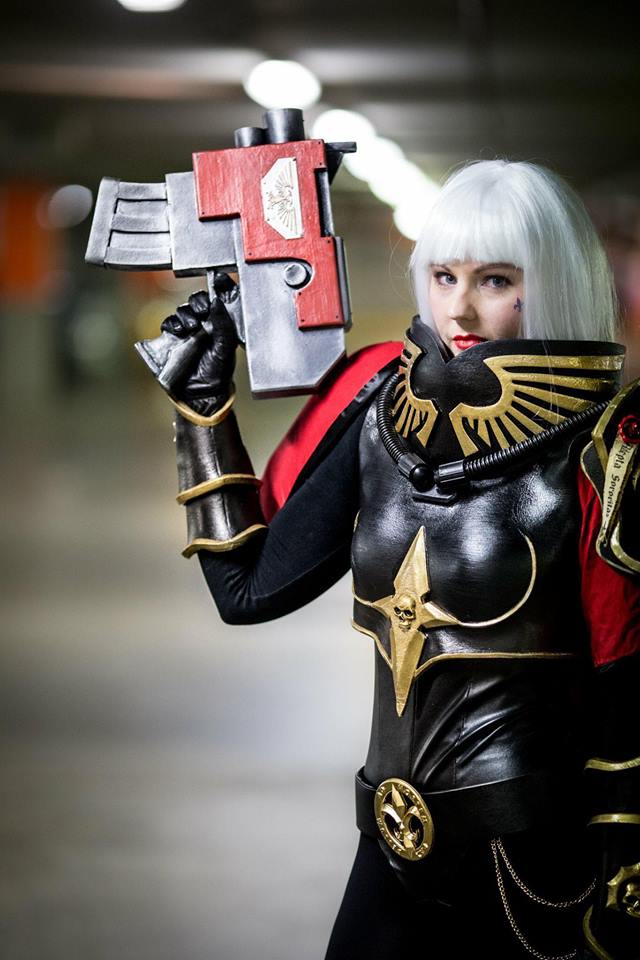 Any we can find! We are now kind of addicted to the scene. 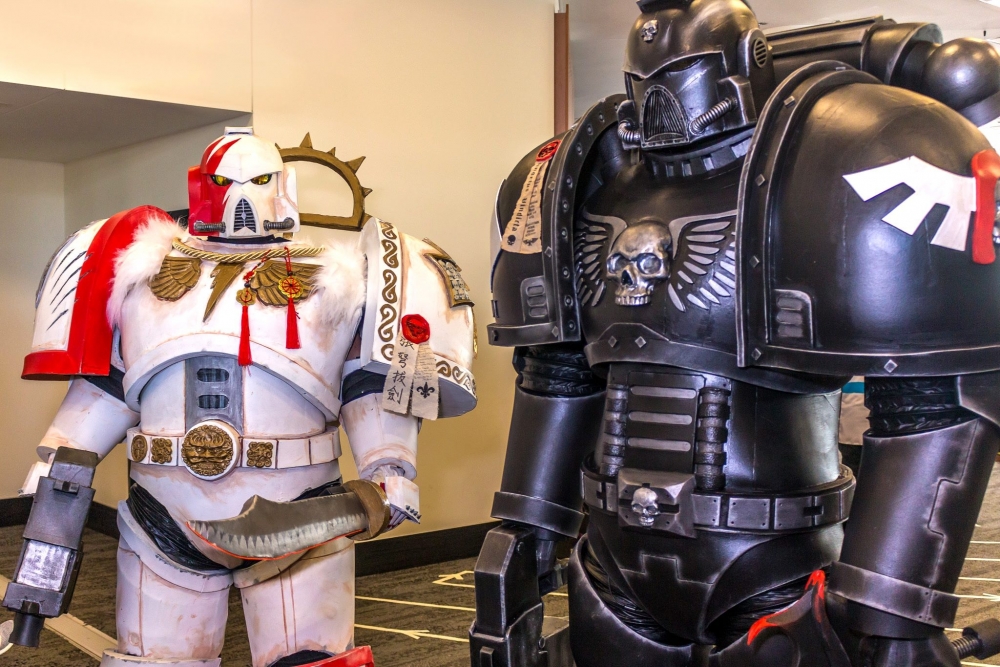 I was watching random scifi series but it became too distracting so I listen to Shuffle dance music on youtube. It keeps me motivated.

Measure twice, cut once. Keep your blade sharp. Don’t fear the foam!…. and above all, don’t be afraid to mess it up. I do…

There are some incredible cosplay builders out there and many of them are more than happy to give you pointers, tips and more. Just reach out to them. 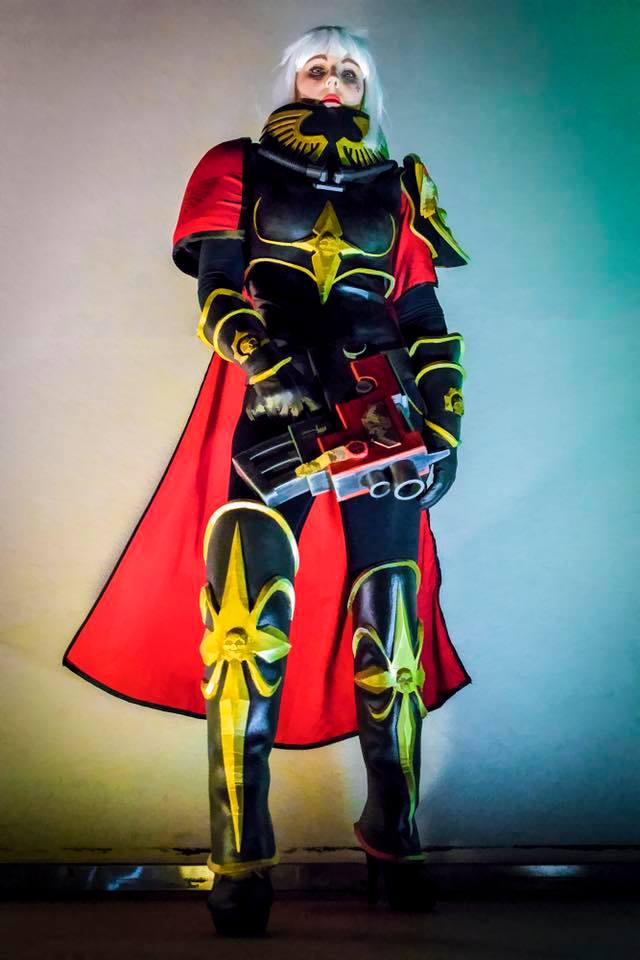 Goldnova is about to start!