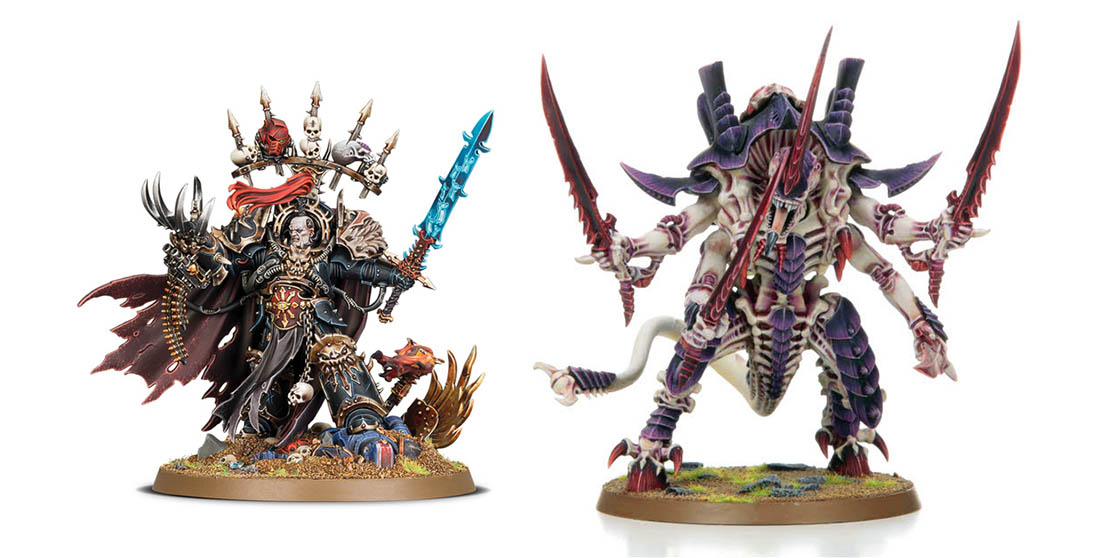 Over the past couple of years, Chaos Space Marines have slowly taken on the roles Tyranids held.

With a bunch of big releases on the horizon for CSM its natural that we’ve all been thinking a lot of the mortal followers of the Chaos Gods. In particular, I’ve been thinking about how the CSM play on the table, and what kind of design space or archetype they fill. What I’ve noticed is that over the past few years and editions, Chaos Space Marines have slowly morphed to fill a role previously held by Tyranids, so much so that what veteran players might think of as the archetype of a classic Nid list is better suited to CSMs. Looks take a look at how this happened, and why it’s a good thing.

To understand what I’m talking about it’s important to look at what a classic Nid list was. Going back to the older Nids books, I’m talking 3rd-onward (maybe 2nd but I didn’t play much then), the classic archetypal was: a horde of cheap troops, ‘Gaunts, backed up by the big killers, Hive Tyrants, Carnifexes, and other larger monstrous creatures. What made these lists hard to deal with was the combination of cheap troops for board control, and giant “bully” units as Goatboy calls them. These units normally had some shooting, but were more mobile, and often tougher than traditional tanks. These lists tended to be aggressive moving forward and getting into combat, even with the big units. To me, and many players, that is  “Classic Nids.”

Now Nid lists have evolved a lot since then, and it makes sense for Nids to do so. I guess you could say the old lists of Behemoth and the 1st Tyrannic War have morphed into Hive Fleet Leviathan. You don’t see the old style lists much anymore, with Nid players largely dropping Carnifexes, and many of the non-Flyrant, monstrous creatures for Genestealers, Hive Guard and more of the medium units of the list. This shift has left the old style archetype; cheap troops backed up by “bully” units that are missing from the game.

Over the last 3 or so Editions GW has really been pushing Demon Engines. While 3rd Edition saw the introduction of the Defiler, it was for a time kind of a lone crab among the CSM line. 6th saw the introduction of Maulerfiends, Forgefiends, and Heldrakes. 8th has now seen an even larger batch of new Demon Engines. The start of 8th saw the Foetid Bloat-Drone, Myphitic Blight-Haulers and Plagueburst Crawlers added to the Death Guard. Now we’re getting the Venomcrawler and Helstalker (with Lord Discordant riding it). We’ve also since 3rd acquired similar units from allied Chaos armies, like the Soul Grinder, Mutalith Vortex Beasts, Demon Primarchs, and the turning of Chaos Dreadnoughts into Helbrutes. Chaos now has a dozen+ units that fit that “bully” or old style monstrous creature profile. 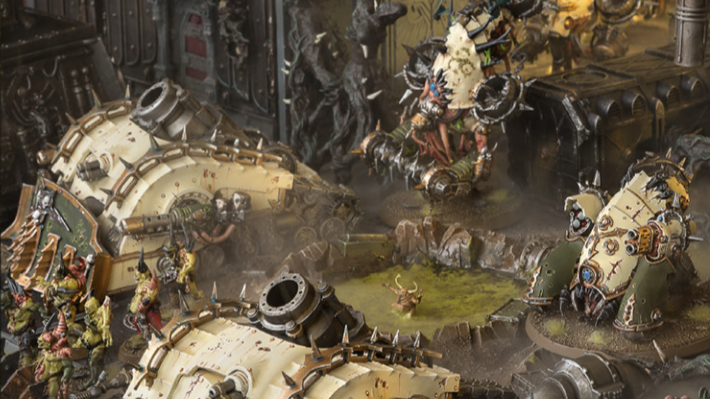 If we look at a lot of the CSM lists that have done well in 8th, and in particular the Death Guard Lists, you can see a lot of them look like the old Nid lists. They tend to be made up of a lot of cheap troops, Cultists, Poxwalkers, Tzanngors, sometimes daemons, backed up by the big “bully” units: Winged Demon Princes and Demon Engines. How many Death Guard lists have you seen that are something like, 3 Plagueburst Crawlers (PBC), 3 Bloat Drones, 2 Winged Princes and bunch of cheap troops? Maybe a few psykers. That’s the same archetype as the old Nid lists. These are lists that play aggressively, with even the ostensibly long ranged units like the PBCs moving forward and getting in your face. Playing against these lists feels a lot like the old Nids.

With all the extra love Demon Engines are getting in CSM 2.0 it seems like GW wants to push this type of play. The more I look at it it seems like the age of “Big Bug” Chaos is open us. While Death Guard have ruled this type of list for the last year and a half, the new Lord Discordant might be changing that. I’m already hearing people talk about lists with 3 Maulerfiends, 3 Venomcrawlers, Lord Discordants, Winged Princes and Cultists all running in your face. 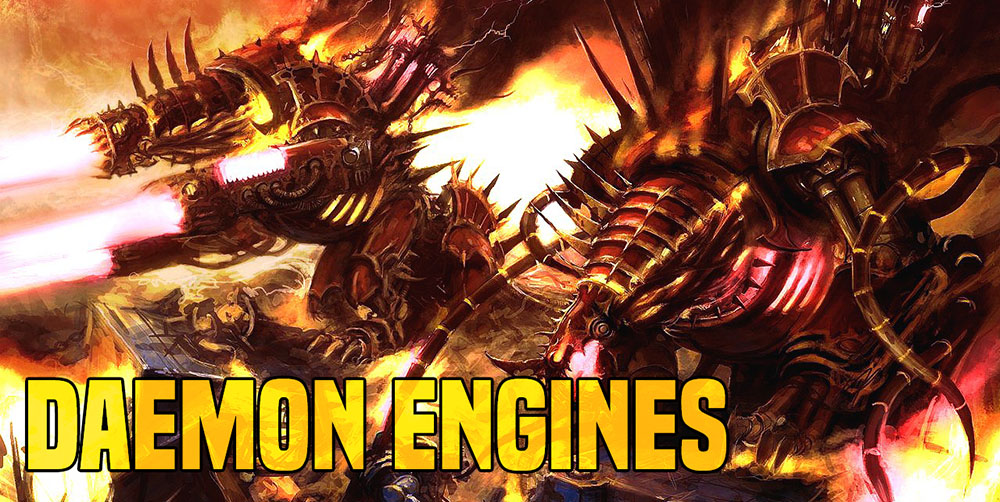 Overall I think the move toward more Demon Engines is an excellent thing for CSMs. For a long time, CSMs were just Space Marines with spikes and some anger issues. They often tended to take the “dark mirror” thing a little too seriously. Demon Engines seem to be how GW wants to set CSM apart from their loyalist brothers. Daemon Engines give CSMs a nice unique look and play up that not quite human/not quite demon think they have going. Tabletop wise it’s also a good space to fill since Nids have kind of moved out it. (Nids, of course, CAN still fill the space, but I think CSMs might be it better, and hey competition is king!) Overall it’s a good move and good place for the army(ies) to be as the new book comes out. For now, at least, it sure looks like Chaos is the new Nids.

Let us know what you think about this new direction for the CSM armies, down in the comments!

Author: Abe Apfel
Abe is that rare thing, an Austin local born and raised here. Though he keeps on moving around, DC, Japan, ETC., he always seems to find his way back eventually. Abe has decades of experience with a wide range of tabletop and RPG games, from historicals, to Star Wars to D&D and 40K. He has been contributing to BOLS since almost the start, back when he worked at and then owned a local gaming store. He used to be big into the competitive Warhammer tournament scene but age has mellowed him and he now appreciates a good casual match. He currently covers 40K tactics and lore, as well as all things Star Wars, with occasional dabbling in other topics. Abe remains in mourning over the loss of WFB to this day.
Advertisement
Chaos Marines Tyranids Warhammer 40k
Advertisement 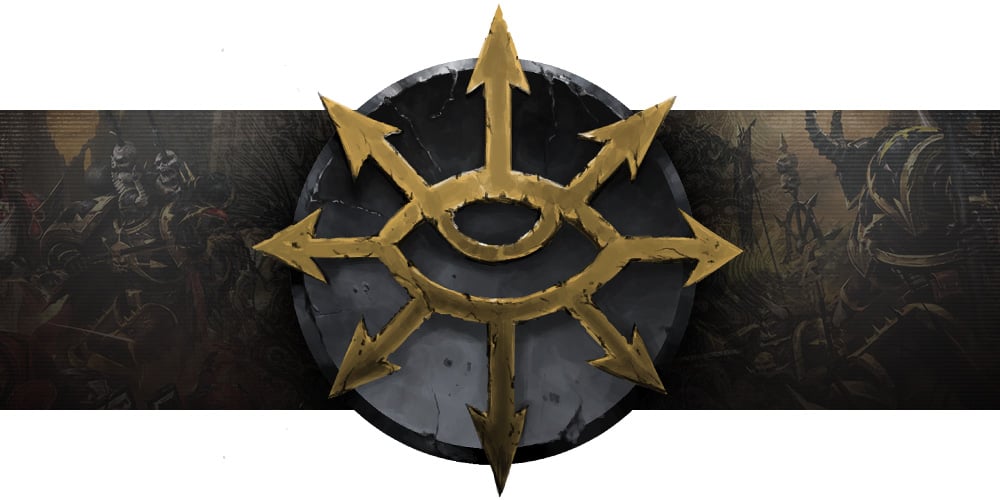