Goatboy here again and if you read my Monday’s post you know I am super excited about the Lord Discordant. Let’s do some theoryhammer and get him on the tabletop.

I get the feeling will see the new lord atop his metal shrimp sit around 140-180 points a model and even if I don’t know his full set of rules I can at least guess how I could fit him into an army.  Heck if my thought of 140 points seems correct then I expect this guy to show up in pairs at least.  Will see whenever we get those sweet new rules for the true bad guys of the universe.  But enough of that – let’s build a fake list that could be viable in a few weeks. 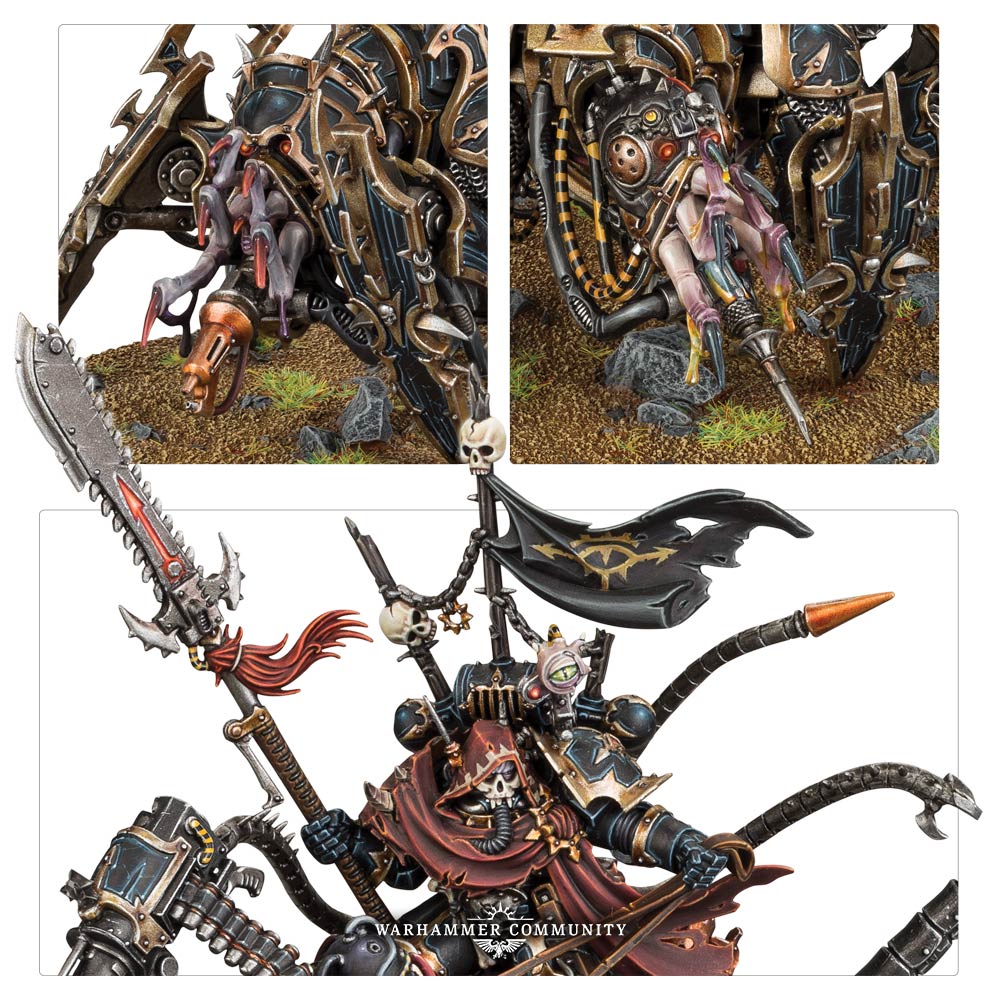 We’ll start this out with a Chaos Space Marine Detachment.  I don’t know if any of the Legion Rules will matter for Daemon Engines.  It is kind of annoying when you compare them to other armies.  We might see them float to the Daemonic Jerks – but if you think about it fluff wise it doesn’t make a lot of sense.  These guys are not actually from the Legion – they are warp monsters shoved into a jail cell full of Brass, tainted oil, and nightmares.  But if they do get extra rules I won’t complain because that would be too sweet.

This list as written sits at 1979 points – so it leaves 20 points just in case the Lord Discordant is more than 160 points.  The idea behind the list is that it is a brick of death with some Daemonette backing to kill anything it moves up to.  It is super fast, shoots alright, and it looks like it should hit pretty dang hard.  I wonder if there is a case to tweak some things, add in the new Oblits, and maybe try to get some Bikes in to clear out some chaff.  There is also thoughts on using just plane CSM Slaanesh Terminators with Combi-Bolters as it is a ton of chaff killing firepower to allow your giant beasties a way into the fight.  I didn’t want to start to think of that until we truly had the Discordants rules/points as this is just trying to utilize what we currently know.

The Auras this army has is a reroll 1’s from the Daemon Prince, +2 to Strength to all the CSM daemon engines, +1 to Strength on the Daemons, +1 to hit from the Discordant, Cursed Earth and then anything else I can throw out.  Heralds can throw down another attack phase if something gets into close combat and the Fiends are sitting there to mess with spell casting a bit as well as lock a unit down if you don’t want to get shot up.  Overall it feels like an interesting list.  Plus it is full of Daemonic Robots.

Anyone else excited about the upcoming Chaos releases?  Are you feeling like GW might actually be listening now to what the players want?  Do you think Chaos will be too good and get nerfed a ton?