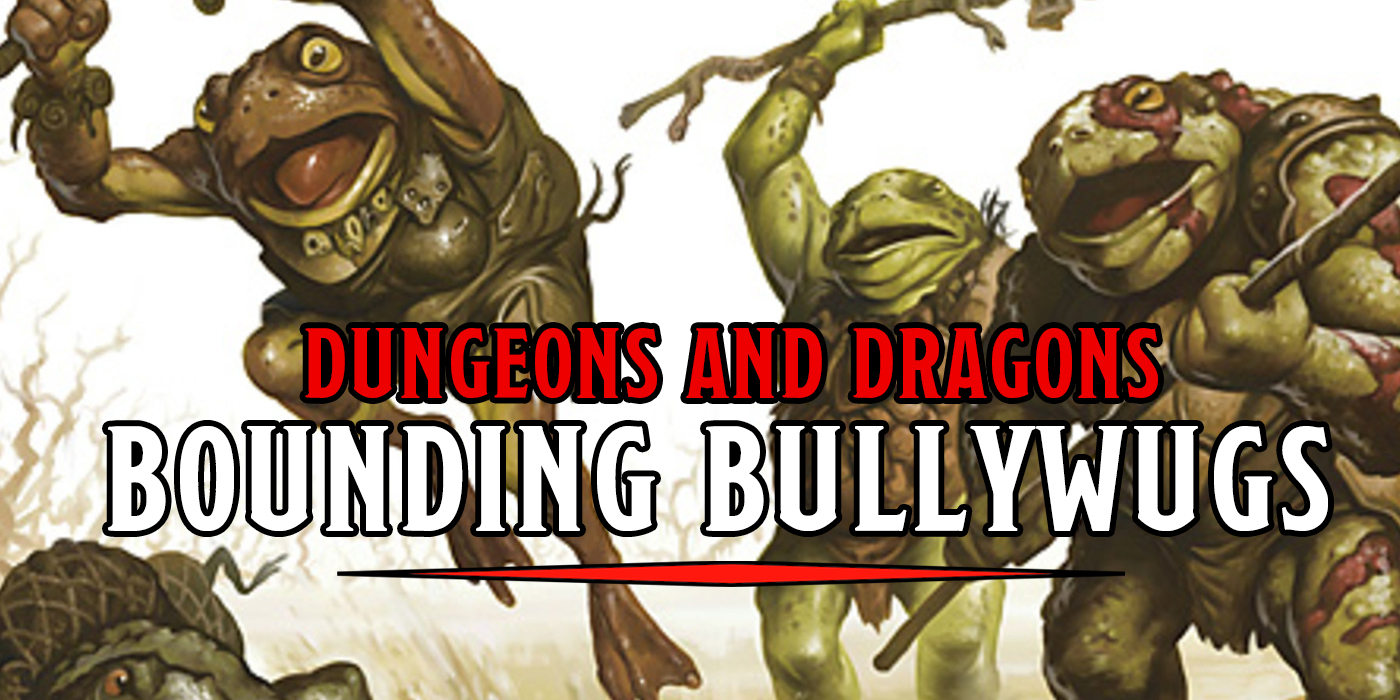 Bullywugs are unsung heroes of low-level D&D , but thanks to two new Bullywugs in Ghosts of Saltmarsh, today we’re going to sing them. Well, spotlight them.

It is a truth universally acknowledged that where there is water, there must also be water-themed D&D monsters. Rifle through a Monster Manual from any edition and you’ll find a bevy of critters that taste great with tartar sauce. Slaad, Locathah, Sahuagin, Tritons…no creature from the surf and turf menu escapes being turned into an encounter that will invariably end up on the wrong end of a bunch of PCs. Today we’re going to take a look at Bullywugs, one of the greatest low-level monsters out there. As we said, there are two new ones in the Ghosts of Saltmarsh, so we’re celebrating by taking a look at just why Bullywugs are the best.

We may have had to employ some…unusual methods to bring you this article.

First appearing in the Fiend Folio, Bullywugs are another in a long line of froglike humanoids who dwell in the swamps, marshes, rainy forests, damp caves–really anywhere that can be described as dank or better still, moist. These batrachian buddies have long been a part of D&D history, owing their creation to both Luke and Gary Gygax. And though, throughout the editions they’ve remained a race of chaotic evil frogmen full of hate, they’ve undergone a few changes to their theology over the years, being associated with a number of froggy deities throughout the editions, including Wastri, Ggorolluzg, and Ramenos, the bizarre frog-god of the Bullywugs.

It seems reasonable, though, given the number of stories out there where some muscle-bound hero comes along, sword in hand, ready to murder (or otherwise drive back) an ancient amphibious deity from the depths, before it can work its frightful evil upon the world. So, I guess if you’re a Bullywug, you just sort of accept that your god will get murdered every now and then, but a new one always seems to come along. Perhaps that’s one of the reasons they seem to be so enduring in the canon of D&D Monsters. That and the fact that everyone wants to play a Bullywug (or other batrachian battler) at some point in their life. 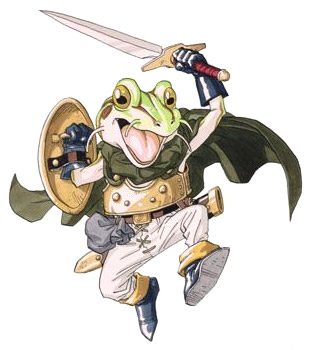 A heroic frog? I’m not sure anyone’d ever go for that…

And it’s easy to see why. Bullywugs are great–similar to Kobolds, there’s a sort of spiteful buoyancy to their nature that keeps them going in the face of a world that hates them as much as they hate it. Especially those smarter than them. Especially if they’re other Bullywugs. 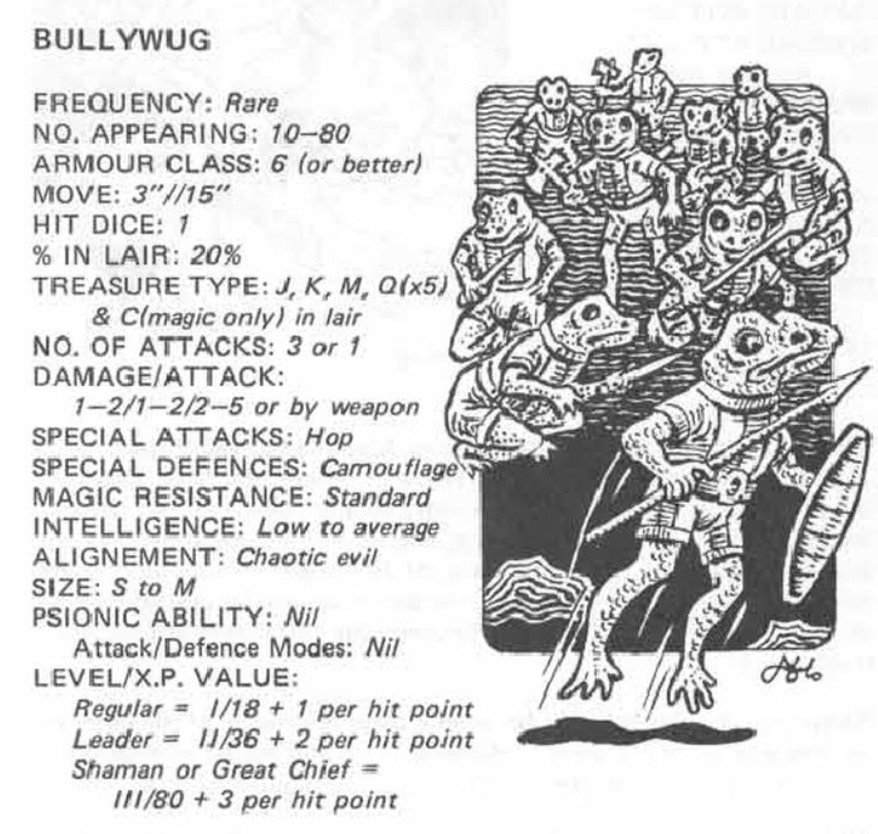 This has been true ever since their first edition Fiend Folio days, which states:

Some types of these creatures are more intelligent than others. The intelligent groups tend to dwell in caves or deserted human habitations, and will usually have armour, shields and various forms of weapons. The less advanced bullywugs hate their more intelligent fellows and war upon them.

And first edition Bullywugs are amazing. They were played up with that “first edition charm” born of a kind of wild drive to simulate the “realistic” aspects of the monsters. Which, in the case of Bullywugs, meant using the rules to mirror the qualities of frogs. Most notably, their ability to leap long distances. You can see the primitive Bullywug up there in his romper, leaping off the ground–performing one of their characteristic special attacks. A leap attack that granted them +1 to hit and that allowed them to deal double damage with an impaling weapon. So our illustrated example is about to straight up murder something when he lands.

Couple that with the Bullywug’s chameleon-like ability to hide with a 75% chance of going unnoticed–including via infravision (see what I mean about the frenzied drive for realism) which let them surprise foes 5 out of 6 times and you have the makings of a deadly foe. Unless you were prepared for them. Because in their very monster entry lies the key to destroying them, which is a dubious distinction shared by few monsters. But the Bullywug’s signature hop could be braced for (much like setting a weapon against a charge) which in turn dealt double damage to the Bullywug. And since they have only 1 hit die, it’s easy to see who wins out in that exchange.

For my money, they were the break-out stars of the Dwellers of the Forbidden City, a Burroughs-esque adventure which saw heroes trying to find an item in an ancient city that had been overrun by factions of yuan-ti, tasloi, and Bullywugs. There, players could find (and naturally steal) the Bullywugs’ god-egg (just a dragon egg protected by an invisible stalker), or run across the self-styled King Groak, who is just waiting to make another appearance, I’m sure. 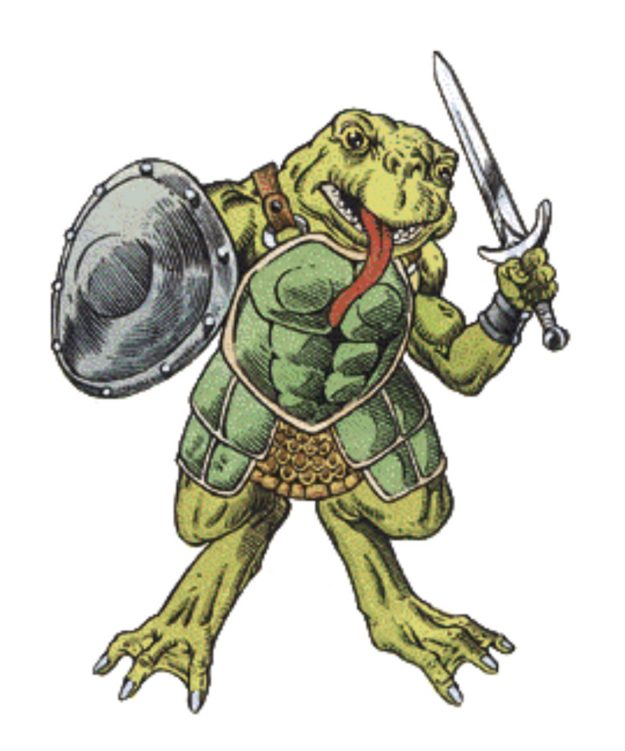 2nd Edition Bullywugs dropped the word “batrachian” from their description, which breaks my heart, but I suppose they made up for it with the fact that the new art makes them look like a medieval version of Krulos from the Dino-Riders cartoon. 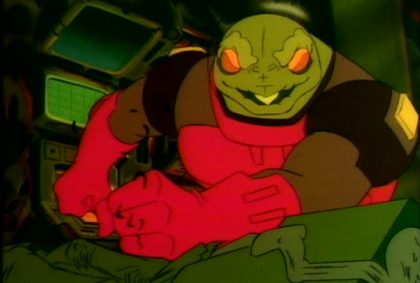 And I just found a new Starfinder villain…

Batrachian betrayal aside, 2nd Edition also expanded on the ecology of the Bullywugs. That’s one of the things the updated editions did well–though the monsters themselves rarely changed (or were simplified in some cases), it did give them, in general, a better fit into the world. D&D has always been vaguely simulationist and 2nd Edition is a prime example of that. To wit: Bullywug society was given a surprising amount of depth. They were organized into fascist groups, fed primarily on fish and meat, and had a savage society ruled over by a bizarre frog god. As of 2nd Edition it’s Ramenos, a specifically Bullywug deity as compared to Wastri who was a deity of amphibians and bigorty, Ramenos is a hibernating, self-destructive god who spends much of his time either asleep or in a stupor, dwindling and dwindling–which is why all of those temples to bizarre frog deities are in ruin.

Nevertheless 2nd Edition Bullywugs focused more on the bully part of their names. They were a society of the weak and the dominant, with larger Advanced Bullywugs (who would go on to be the player race that was described twice in this edition–and differently each time) ruling over their lesser brethren with an iron (webbed) fist. 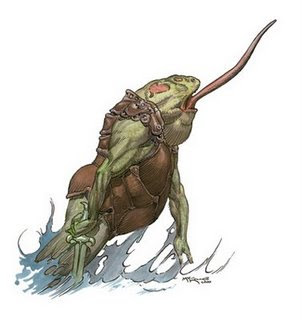 Bullywugs in 3rd Edition are at their lowest. They don’t appear in the Monster Manual, or either of its sequels. They do enjoy an appearance in Monsters of Faerun though, which gives them the proper 3rd Edition treatment , granting them abilities like a +6 racial bonus to hide (because of their camouflage), and a hilariously unpredictable summoning ability for those with cleric levels. Bullywugs were described as preferring to attack with summoned creatures, BUT, any summon monster spell cast has a 50% chance of summoning an extra monster–and more importantly, a 25% chance that the monster(s) summoned wouldn’t be under the Bullywug’s control.

Which meant that any fight with Bullywugs could get…exciting.

This may also be why they are described as being at the low point in their civilization in this edition–the Bullywugs believe they are at war with the sivs (yet another race of frogmen). But in reality they lost, long ago, and are being allowed to survive by the sivs to act as a buffer between their own lands and the outside world. A hateful, stupid buffer. 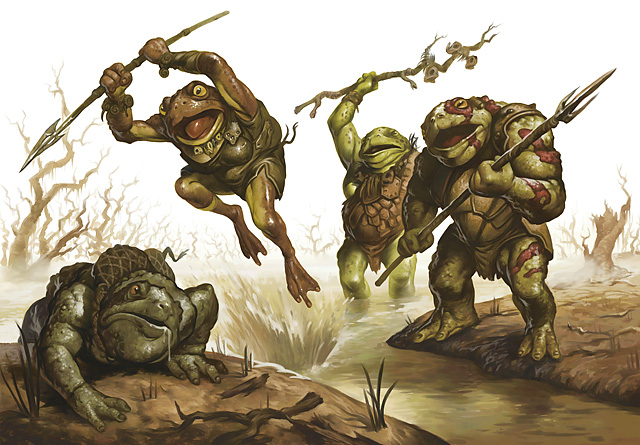 4th Edition Bullywugs got an action-hero-style upgrade. They look tougher, more like a threat and less like a pathetic frog race, just hanging around waiting to be turned into XP by a group of random adventurers. Of course, they still were–though they at least had a little more variety. They are the most existentially in crisis of the Bullywugs, owing to the fact that while they are described as strong and stout, they also “turn any land they inhabit into a dismal echo of what it once was, so much so that even they view their existence as innately askew.”

And because this was 4th Edition, a sentiment like that doesn’t get written without there being some kind of mechanical backup to it. In this case, it manifested itself as a special quality that all Bullywugs possessed called Nature’s Release, which restored hit points to anyone who managed to critically hit a Bullywug. If that doesn’t seem like a big deal, remember that in 4th Edition, straight up healing was hard to come by–most things let you spend a healing surge (and you had limited numbers of those), so these walking critbags were full of both H-and-X-P.

Also, this healing was described as the world thanking the heroes for ridding it of these menaces.

Understandably, Bullywugs were extremely paranoid and hostile to all outsiders. To make up for all this, though, Bullywugs got four different varieties of warriors–the mucker, the twitcher, the croaker, and the Mud Lord–the natural ruler of the Bullywug, who were rewarded for including their own allies in their area of effect spells (of which they had plenty). Bullywugs were kind of going through some stuff in 4th Edition. Maybe they had been following Ramenos for too long. 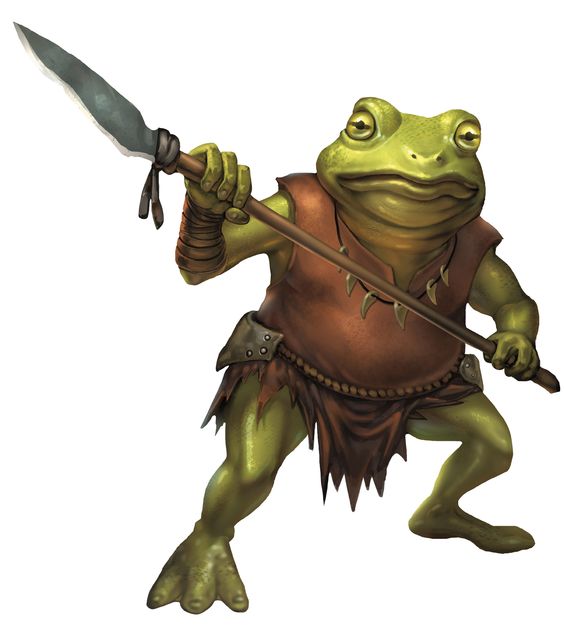 Whatever they were going through in 4th edition, Bullywugs seem to have got their act together by 5th. Now they are a brutish and cowardly race who consider themselves the right and proper rulers of the swamps. They’ve gained back a little of that spiteful self-confidence that they possessed in their early days. Their society is once again more detailed, owing to 5th Edition’s focus on making sure that the rules work with the story elements and vice versa. Bullywugs are rewarded for murdering their way up through the ranks (though they have to maintain plausible deniability), or they can go on raids and bring back treasure.

Either of these options are represented in the Bullywugs’ mechanics–they’re skilled at Stealth and also can increase their speed with a jump, making them suitable for skirmishing or skulking around. And with their swift pouncing–and ability to make both a spear and bite attack, they can (if they’re lucky) get away with murder. Or at least be a minor annoyance to the PCs they are surely to run across.

In Ghosts of Saltmarsh you’ll find two more, the Bullywug Croaker and the Bullywug Royal. These represent what higher-level Bullywugs might look like, going as high as CR 4. These both make excellent bosses for a low-level adventure, probably suitable to be thrown at parties around level 2-3 depending on how tough your players are.

At any rate, if you are looking for an unmoving, almost vogon-esque (at least in terms of bloodymindedness) opponent for your PCs to go up against, consider the Bullywug. Sure, they will probably die, but they’ll at least get your table jumping.

As Bucky says, Let’s Croak Us Some Toads!