Fantasy Flight Games has some a new deluxe expansion out for A Game of Thrones and two new packs for LoTR and Arkham Horror LCGs! 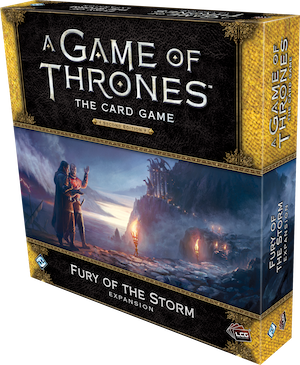 The Baratheons have held dominion over the Seven Kingdoms since Robert Baratheon seized the Iron Throne in open rebellion. This makes House Baratheon the most powerful House in Westeros, but it also means the Baratheons must constantly guard against the schemes of those who would threaten their throne. The threats come not only from other Houses, but also from within: as Renly Baratheon raises an army in the south, his brother Stannis turns to a new faith on Dragonstone. But if you can unite the brothers under your command, Westeros is sure to be yours!

Fury of the Storm is a deluxe expansion for A Game of Thrones: The Card Game that shines the spotlight on House Baratheon, the rulers of the Seven Kingdoms in the opening of George R. R. Martin’s A Song of Ice and Fire series. This expansion provides you with 156 cards, including new versions of powerful characters like brothers Robert, Stannis, and Renly Baratheon and cards that explore the King and R’hllor traits. But the Baratheons are the only ones to gain new tools. Every House in A Game of Thrones: The Card Game is represented here, gaining new House cards and a collection of neutral cards that any leader can use to their advantage.

Now, as Westeros threatens to fall into chaos, House Baratheon will come together bring their full force down upon those who would defy their rule. They will not surrender their power, and all who stand against them will see that theirs is the fury! 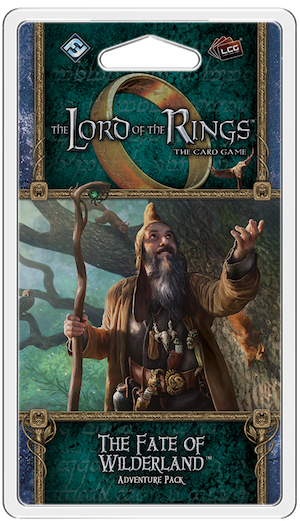 Your mission should be complete, with both your party and Wilderland safe at last, but now you find yourself out of the frying pan and into the fire. In a move long-planned, Urdug has returned with an army of Goblins to lay claim to Gundabad and the dragon’s hoard. Goblins swarm up the mountain slope, surrounding your party, and you have no choice but to fight to keep them back.

The Ered Mithrin cycle of The Lord of the Rings: The Card Gamevreaches its thrilling conclusion with its sixth and final Adventure Pack, The Fate of Wilderland! Set against an army of Goblins with new deadly encounter cards to challenge your heroes and new player cards to help you ready for the fight, this is sure to be a battle worthy of legend! 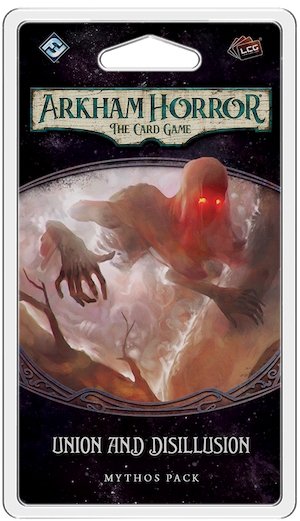 After your brush with the Silver Twilight Lodge in For the Greater Good, you journey to the banks of the Miskatonic River in search of the four souls who went missing from one of the Lodge’s events. Between two of the bridges that span the river, there stands the Unvisited Isle. The foggy shores are barren and unwelcoming, and as you row closer, you try to remain silent, as if to keep the river itself from noticing. Not a soul greets you as you draw closer to the island, save for the judging gaze of ghostly birds that observe you from the trees. In the distance, a pillar of spectral energy is rising into the clouds, a vortex of otherworldly mist spiraling about it.

As you explore the island, you will find braziers scattered at various locations, that you can either light or douse with the new Circle action ability. Lighting these braziers may help push back the heavy mist, allowing you to further explore the island, but it may also be the key step in completing the ritual that has already begun. How far can you push Arkham to the brink of chaos without surrendering the city to the dark forces battling for control of it?

Where will you choose to adventure this weekend?

Author: Adam Harrison
Writer, Editor, Texas Native, and Austinite for 15+ years, Adam covers all things Tabletop Gaming. Which includes Warhammer 40,000, Age of Sigmar, D&D, Board Games and everything else that involves dice, boards, cards and a table. A hobbyist, player, and collector of miniatures and games, Adam's current obsession are his Death Armies for Age of Sigmar, his Blood Angels and Tyranids for 40k, and his ever growing Arkham Horror: The Card Game Collection.
Advertisement
Arkham Horror Card Games FFG - Fantasy Flight Games Game of Thrones LCGs Lord of the Rings
Advertisement