Coming soon, it’s the new Black Anchor Heavy Industries model–this tiem the Steelhead are getting some love with the new Blockader. A massive Warjack that does exactly what it’s name says it will do, the Blockader runs best with the unique support the Stealheads can bring to bear. See for yourself: 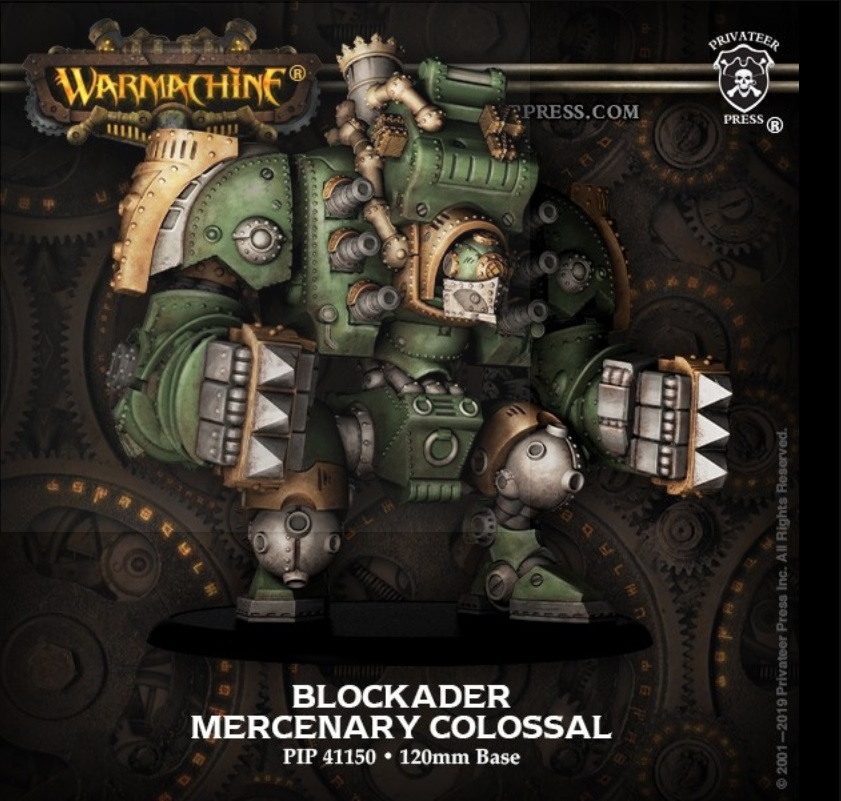 While colossals are costly to manufacture, Black Anchor Heavy Industries in Clocker’s Cove made a tidy profit on its initial Galleon colossal production runs and has subsequently sought to exploit that market by producing variants on that chassis for its wealthiest mercenary clients. The Blockader was built on a similar frame and engineered for a different battlefield role. Its chest-mounted gun ports were replaced with incendiary firebreathers, and its arms equipped with ingenious chain-tethered fists outfitted with propulsive rockets enabling them to crash into foes at a considerable distance. Refilling the incendiary fuel required for these weapons systems is not cheap, requiring smuggled overseen by bribed officials within the Protectorate of Menoth. Serving as the sole source of restock and repair for the Blockader brings Black Anchor a vital ongoing revenue stream.

Gameplay
The Blockader is a smash machine that crushes intruders with its mighty rocket fists. Boasting extremely high P+S melee weapons, the Blockader will turn any foe into scrap. The Blockader’s fists have some additional features like Chain Strike, giving it extended melee range, and Rocket Smash, which allows the Blockader to push its victims around, perhaps into range of the colossal’s allies.

Expanding its more close-ranged gameplay, the Blockader also has a suite of Firebreathers, large sprays that can turn clumped enemy infantry to ash, especially thanks to Shooting Gallery, which makes the Blockader more accurate at close range.

The Blockader is a big fan of Powder Monkeys, who can provide it with additional focus and Ancillary Attacks, allowing it to make an attack outside its normal activation.

The Blockader’s pre-order ends in June, with expected delivery in August