‘Curios’ by AEG Takes Deduction To The Max 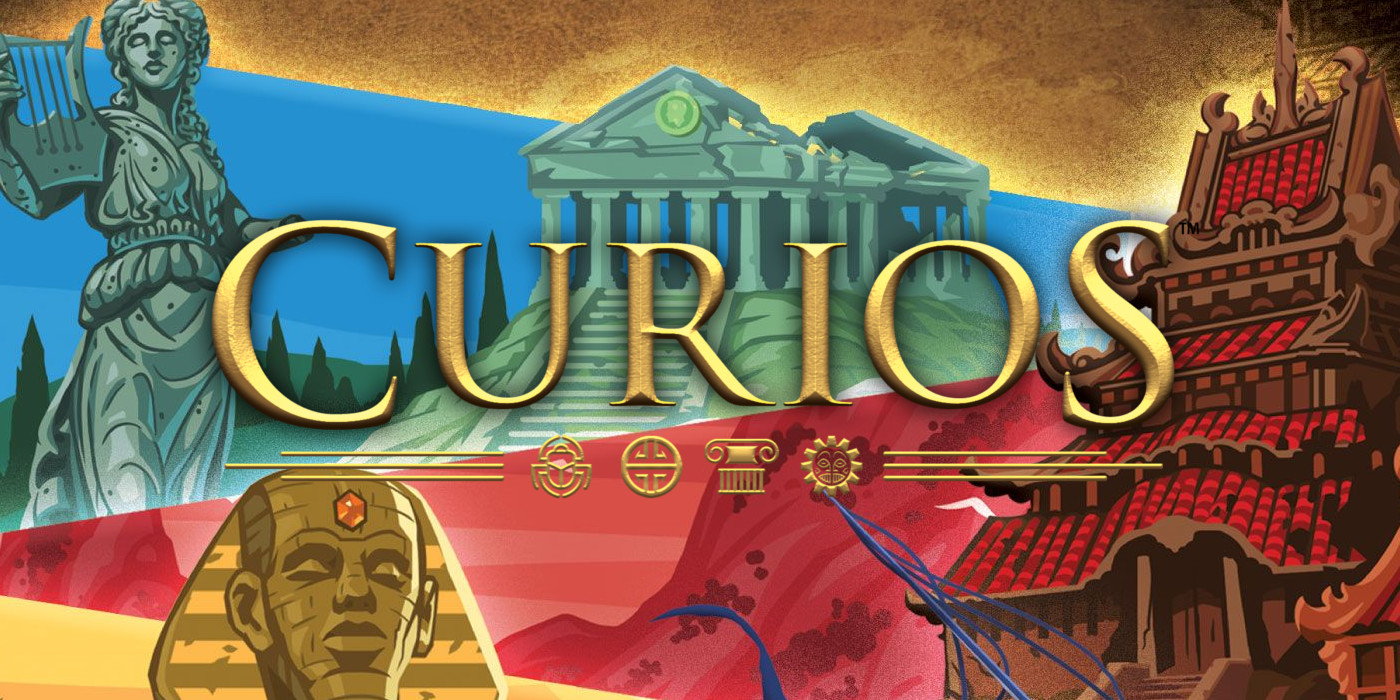 Follow along in this playthrough / preview and see how much deduction and bluffing can be crammed into one game!

If shows like Pawn Stars, American Pickers and Storage Wars are anything to go by, people love treasure hunting. For our non-American readers who don’t know these shows. Don’t worry. You’re not missing much. #HotTake 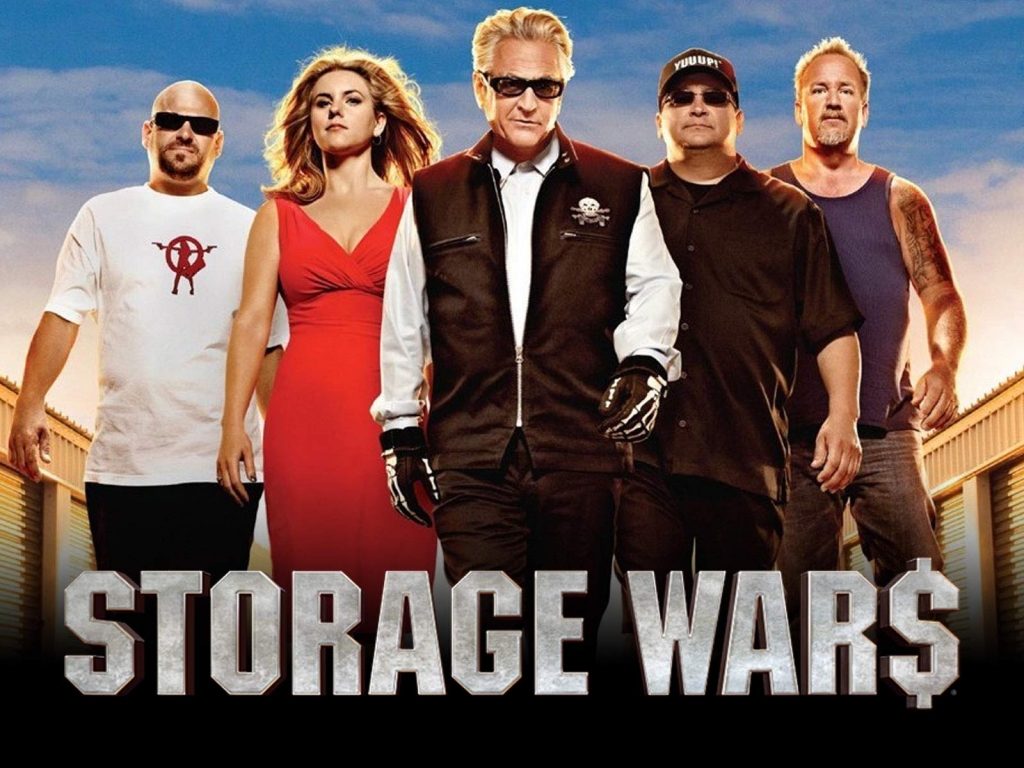 Basically, modern day treasure hunters hoping stuff they find is actually worth a damn. Spoilers: It’s usually not. But, the idea is still appealing. So it comes to no surprise that AEG built a game based on this same premise. 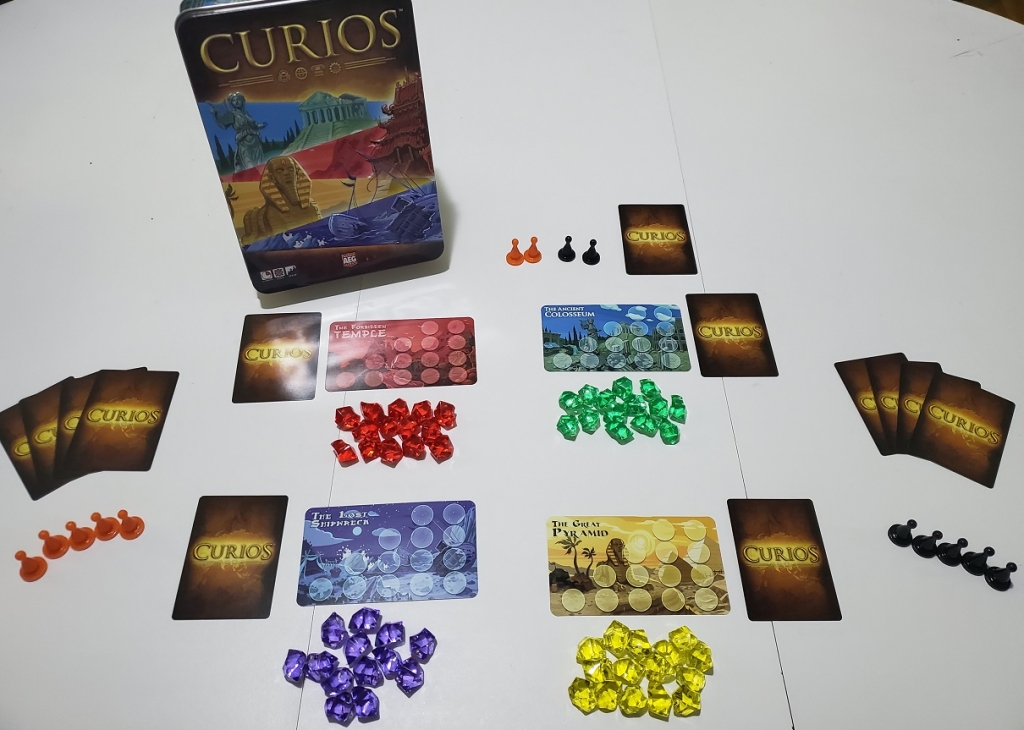 Since AEG sent over a copy I thought it would be fun to do a sort of Playthrough / Preview… a Playthview, if you will. Basically, we play through a game of Curios and explain my thought process and then we can see how well we did!

Gameplay rules will be italicized, to help differentiate from my thoughts and strategy.

Curios is a competitive worker placement and deduction game. The goal of the players is to have the most points by the end of the game. Points are earned by collecting treasures from each of the 4 archeologist sites. The catch is, the value of those treasures is unknown, but can be deduced throughout the game.

Each of the locations has 4 Market cards, ranked 1, 3, 5, and 7. During setup, each location gets a single Market card, which is unknown to the players and dictates the value of the treasures from that location. Remaining cards are dealt to the players, so that player knows which values that location isn’t. Like how Clue does. 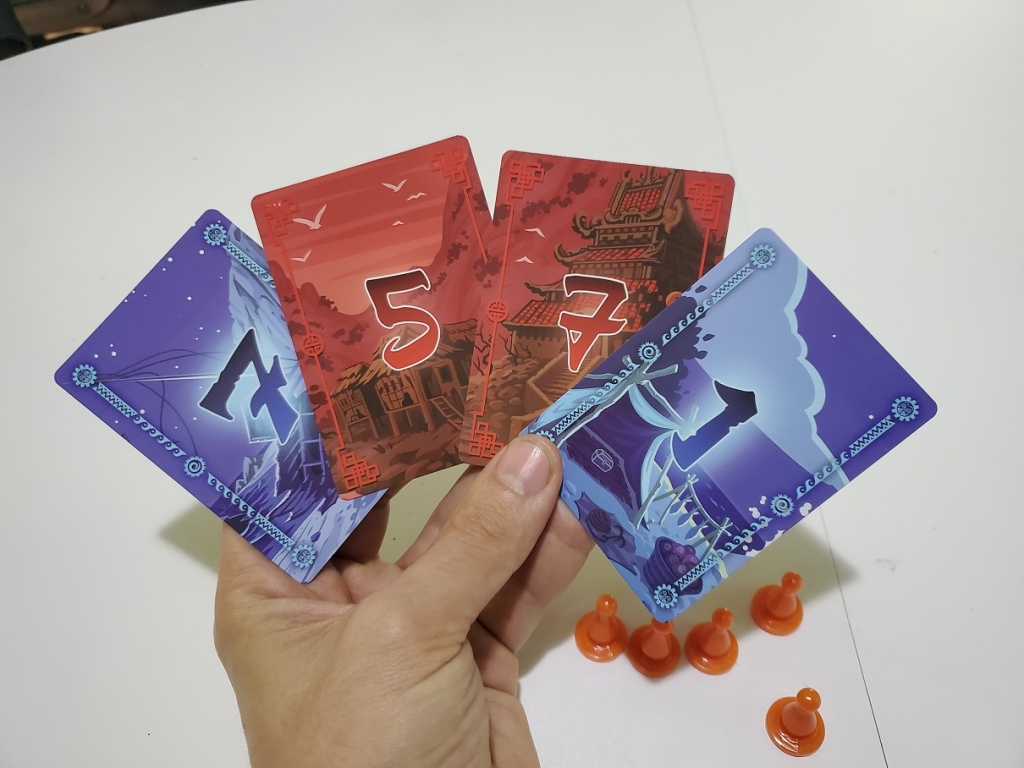 So here’s my hand and it’s a weird one. This tells me to wholly avoid The Forbidden Temple (red) since I know those treasures are either 1 or 3 and certainly not worth the time of a discerning treasure hunter like myself. However, I know The Lost Shipwreck (blue) is going to be a solid choice but not great, since it’ll be 3 or 5.

In each round of Curios, players go around placing their archaeologists at the various sites. Pawns must be placed filling a column, from leftmost to the right. So, the first trip there will cost 1 worker, then 2, then 3 and so on. 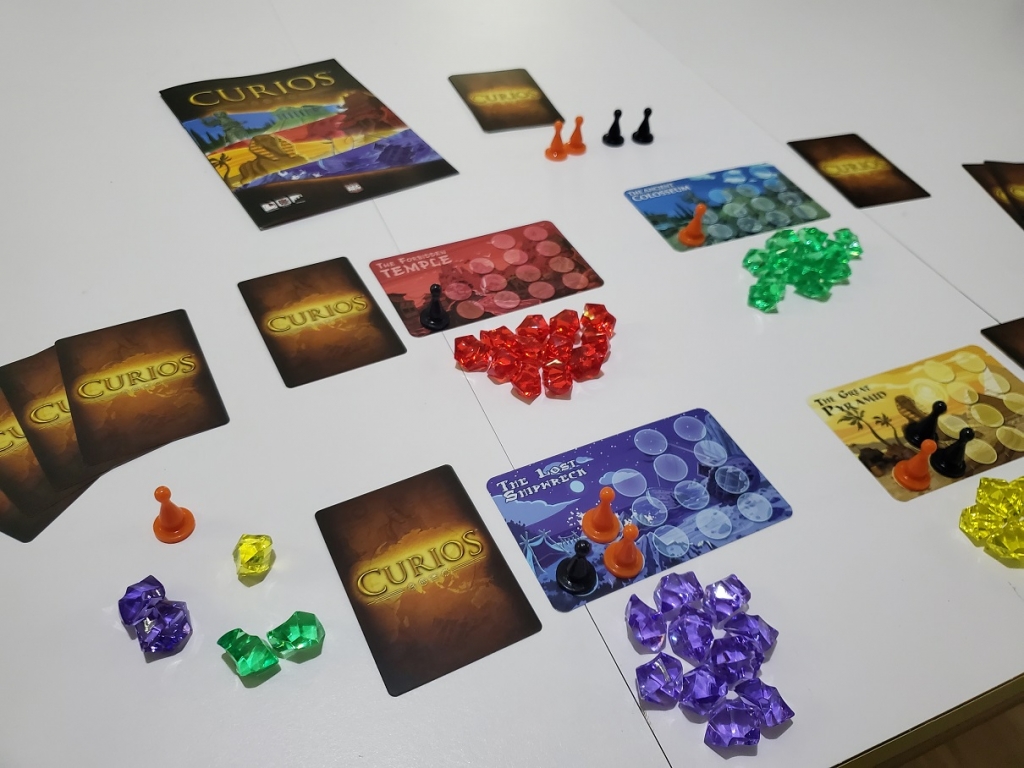 This is the end of the first round and I did grab some from Shipwreck, since I know it’ll be a decent choice. I also grabbed a few from Great Pyramid (yellow) and The Ancient Colosseum (green). Since I know nothing about them, I figure why not?

I completely avoided Forbidden Temple, which is going to be telling for my opponent, if they are paying attention.

At the end of each round, players have the option for gaining a new worker by revealing a card from their hand. Additionally, a card is revealed from the remaining Market cards that were not dealt to the players during setup.

I could have / should have picked up another worker since last round I couldn’t use my last one, but I feel like showing off a 1 or a 7 is too important to reveal and I didn’t want to steer them away from Forbidden Temple by revealing a 5 from there. I want them to keep unknowingly grabbing trash. 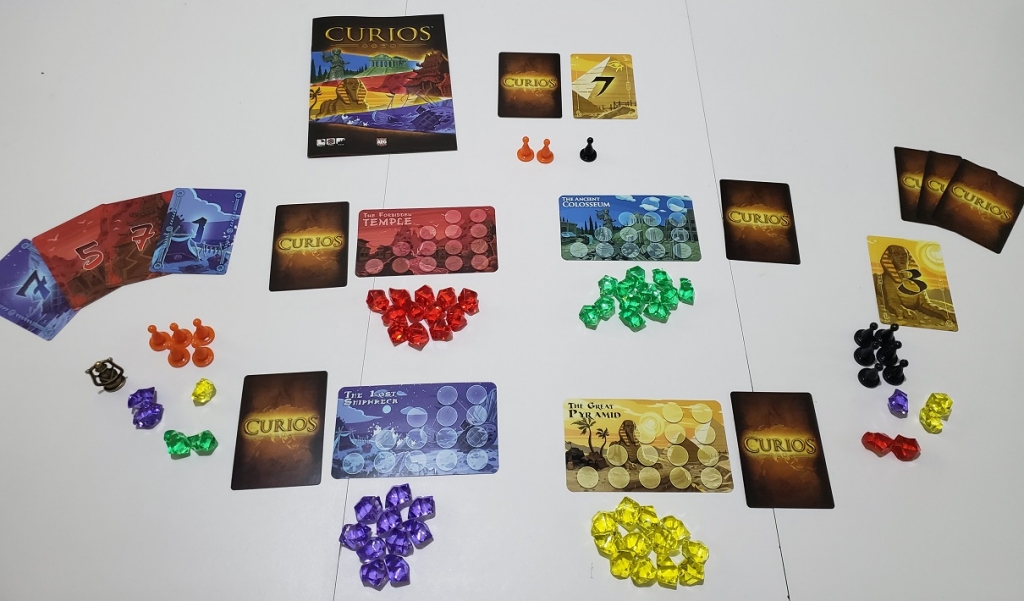 During the end of round 1, my opponent gained a worker by revealing Great Pyramid 3, then the Side Deck card was a Great Pyramid of 7. Still not sure if it’s worth going there. But, I see my opponent has 2 yellow treasures, so seeing the Yellow 7 show up was probably pretty devastating for them!

This doesn’t really alter my strategy at all, since I was avoiding The Great Pyramid anyway. But it’s also good to see that my opponent clearly doesn’t know The Forbidden Temple is hot garbage, since they picked up 2 red treasures already. So far, I think I’m doing pretty well here. 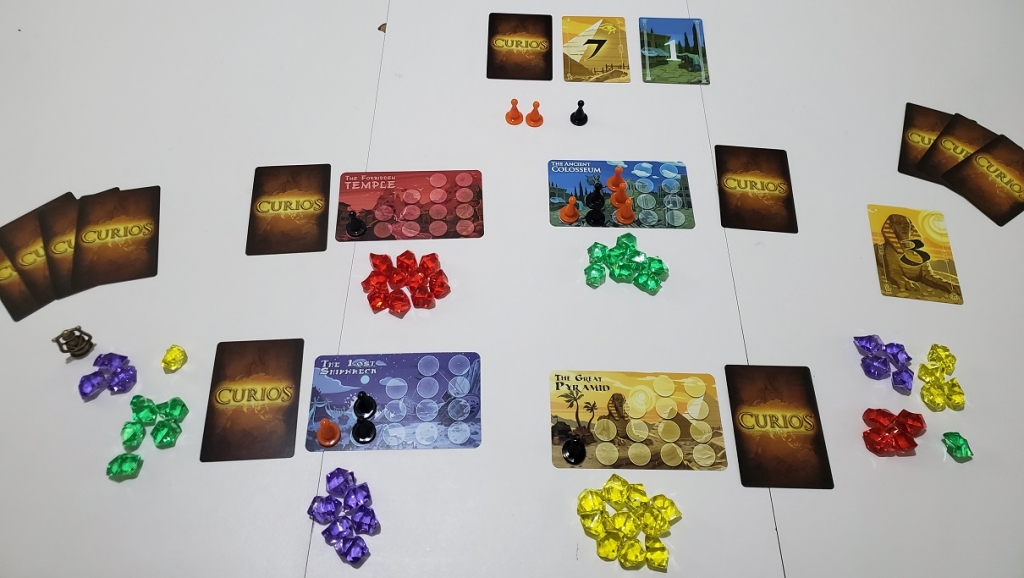 Fast forwarding to the end of round 2 and I’ve shown my hand (figuratively) a little bit. I went too hard on Colosseum and Shipwreck and my opponent has starting doing the same. Which has worked out a little bit since we found the Green 1, so I now know I’m not totally wasting my time there. My opponent either is gambling that yellow treasures are worth 5 or they are have the Yellow 1 card in their hand. We’ll see how that turns out.

The game continues until 2 sites are cleared of all treasures, at which point the game ends at the end of that round. 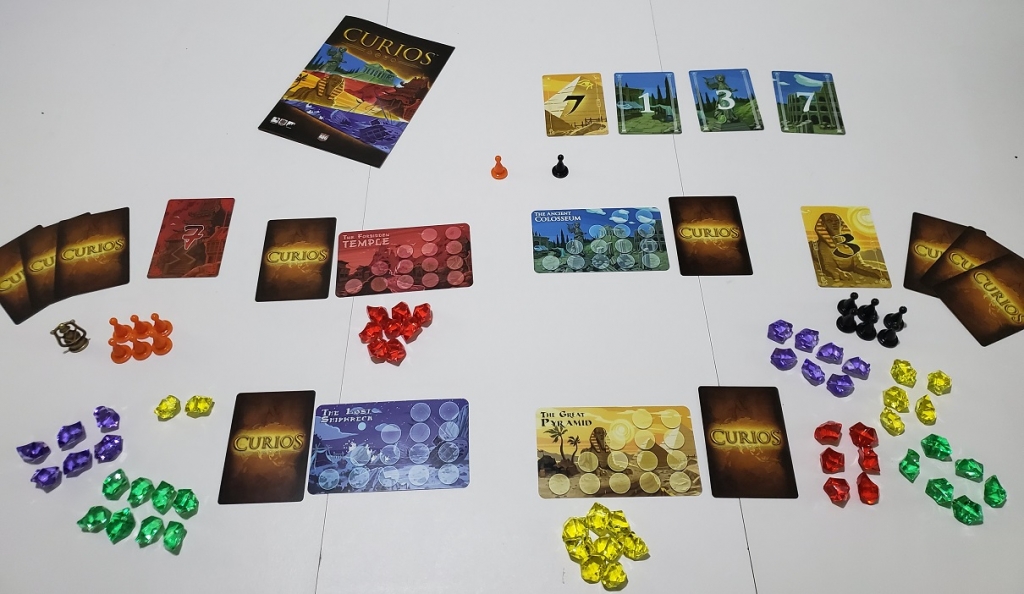 Going into what I knew would be the final round, I opted to reveal my Forbidden Temple 7 since my opponent had a lot of red treasures, I thought it would be a fun morale breaker to reveal that. Plus the Side Deck showed up for sure that visiting the Colosseum was certainly worth my time and I manage to pick up way more green treasures then my opponent.

They have more treasures than I do, but I’m still feeling confident about my win. I know their red and yellow treasures both are 50/50 on being worth 1 or 3, meanwhile I know my 8 green treasures are worth 5 each. I’m in a good spot.

Below is the revealed Market cards as well as final scores.

Make your guess now and be ready to write it in the comments below. Who do you think won and by, roughly, how much? 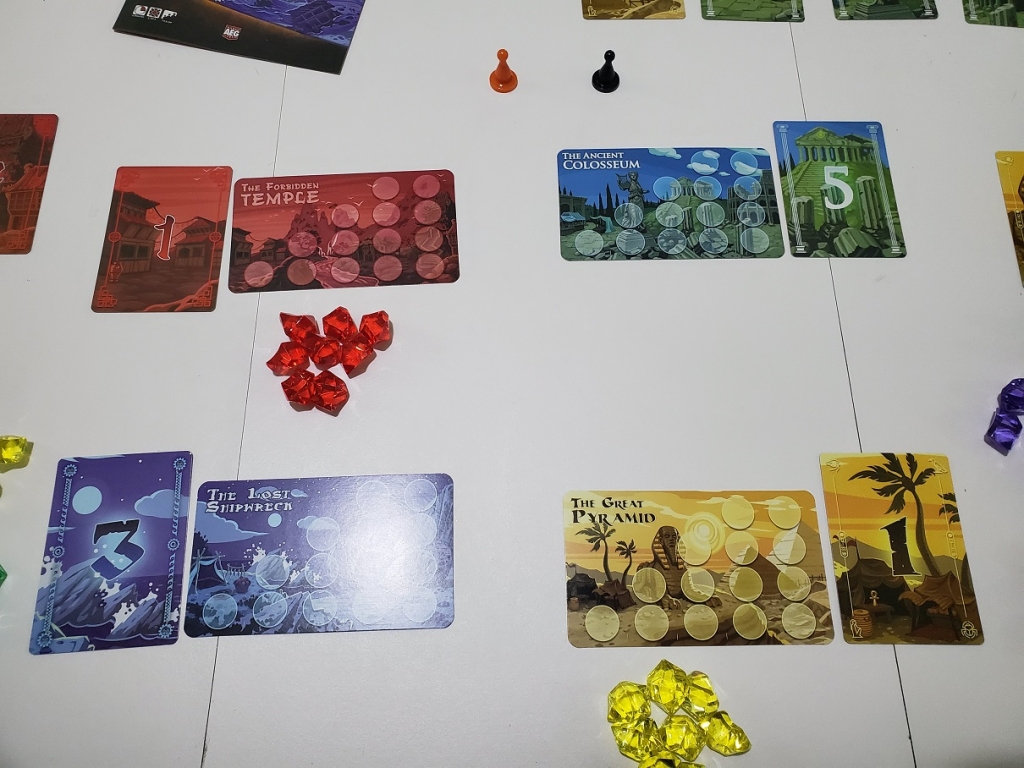 The Great Pyramid AND the Forbidden Temple are both worth 1, which is great for me. Let’s tally up the points and see who wins.

Wait, wtf? Seriously?! Laaaaame! I thought my hubris would pay off this time!

What I like about Curios is you really can pull a victory out from nowhere since your never quite sure how many points you even have until the very end. Plus, a weird quirk is that you aren’t guaranteed to have valuable treasures in your game at all! You could have EVERY treasure be worth 1 point.

I think ultimately I caused my own downfall by going too hard on green and blue treasures, which told my opponent that they were worth something. Plus by avoiding red treasures entirely, my opponent quickly figured out that I knew they weren’t worth my time.

Overall, Curios really gets those mental gears working and really presses those deduction buttons more than any other game I’ve found in a while. Plus with a playtime of only 15 minutes, it never gets too deep in the muck about it.

Let me know if you enjoyed this Playthview and I can do more in the future!
Don’t forget to leave your guess in the comments!
Thanks for reading!