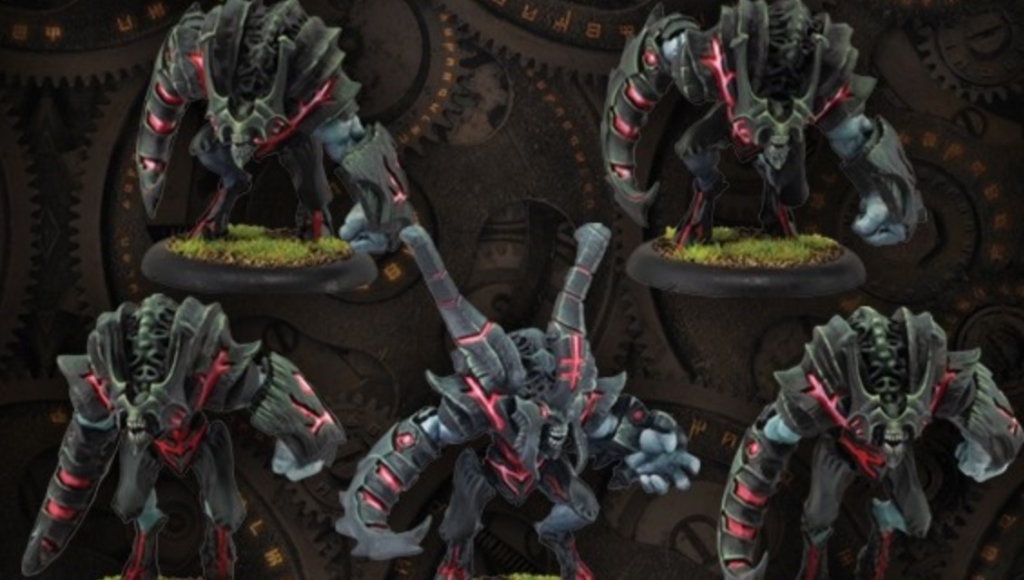 Come see what’s new from Privateer Press this week. Infernals slink out of the dark corners of the world, alongside a whole bunch of robots.

What Infernals dos the new week bring? What monstrous forces are descending upon our planet to either protect or destroy it? And what exactly is going on with Riot Quest? Find out what’s new right here. 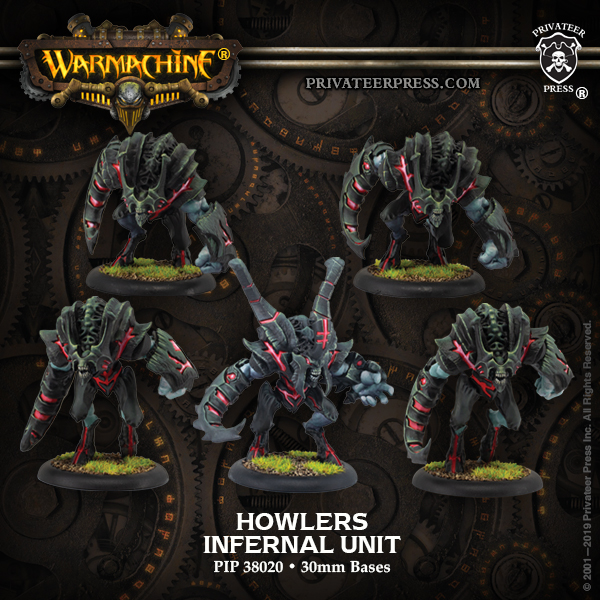 Howlers are heavy and brutish creatures from the Outer Abyss, each having become corporeal in an extremely durable form, boasting thick hides that readily turn aside blades and bullets. These beings ooze shadow and warp reality around them as they charge with ruthless abandon into the fray, entering a berserk frenzy. Though considered infernals, howlers are not as intelligent as the greater masters that enslave them, and they have no fear of destruction.

When Infernals want to smash their opponents in melee combat, they deploy Howlers to cut through their mortal foes. Howlers are big, stocky combatants with a large number of boxes and huge, powerful blades. Berserk and their naturally high MAT mean once they start swinging, they won’t stop until everything around them is dead. Vengeance and Bloodthirst provide movement tricks to punish your opponent for damaging them and ensure they will reliably cross the field and smash their victims. 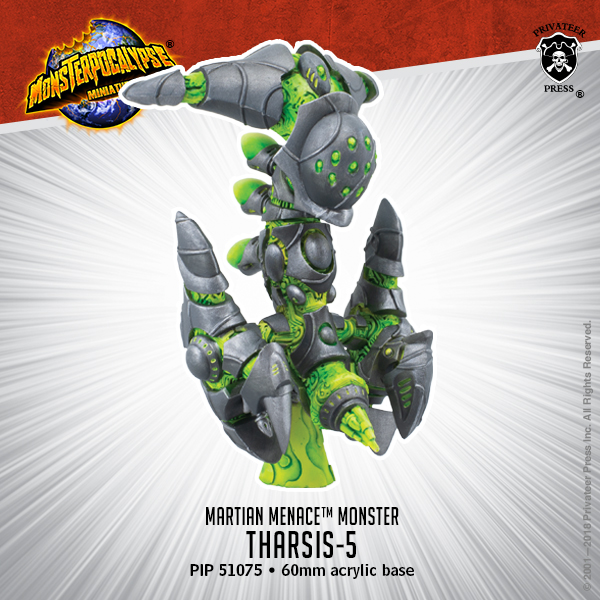 Built to level entire towns and return to orbit after absorbing their resources, Tharsis-5 is as much an architect of the invasion of Earth as any other great Martian super-vessel. Tharsis-5 was built to remain at a low elevation and disassemble its adversaries more directly, becoming something of a self-contained and heavily armed factory and material recycling center. In all respects, Tharsis-5 is an efficient mobile invasion base, optimized to obliterate Earth’s defenders and facilitate Martian forces, particularly across urban environments.

Tharsis-5 is a support monster that can be added to any Destroyers force. It can change the skyline of cities with ease using Action: Repair. Nano Construction grants the Repair action to Martian ground units, meaning a force led by Tharsis-5 is capable of quickly terraforming entire cities. When it goes hyper, it powers up emergency force fields, Armoring it against collisions with buildings, and super charges its giant claws to knock enemy monsters across the city. 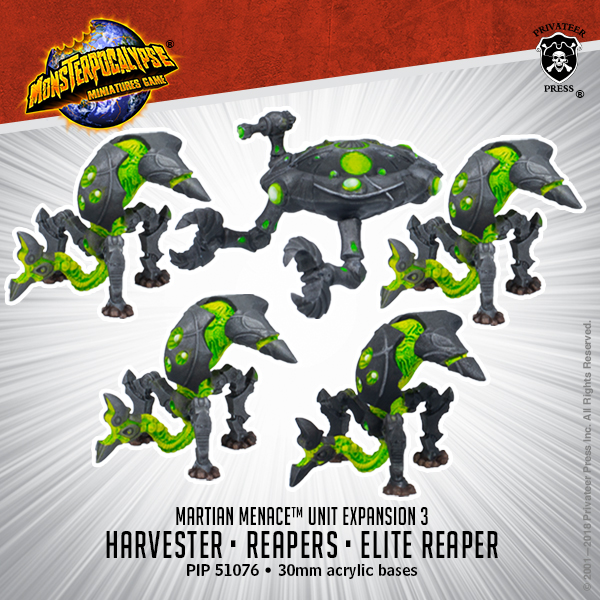 Reaper battle walkers are among the most feared of ground forces deployed by the Martian Menace, striding swiftly through city streets and prioritizing the destruction of any defenders they encounter. Noted for their tremendous facility in climbing over barricades or crossing rubble, they have proven to be implacable foes.

Harvesters, as their name implies, are sinister elements of the Martian Menace that prioritize and facilitate the capture of living subjects. They also assist in gathering other needed resources required for the depleted Martian home world.

This blister pack provides Martian Menace reinforcements for any Destroyers player. Reapers provide Martian forces with a sturdy ground unit capable of scuttling over All Terrain to close with their targets. Harvesters lead the Abduction efforts of these alien invaders, supercharging the systems of their Saucer allies and using their built-in Manufacturing facilities to reinforce Martian forces with any materials on hand. 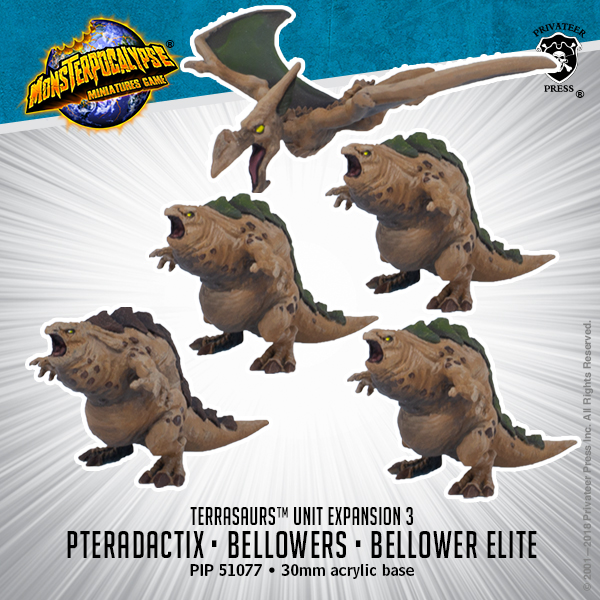 Bellowers are formidable Terrasaurs that have demonstrated a remarkably powerful sonic assault capability. Filling their great lungs with air, they can emit either high-pitched shattering shrieks or their more common deep bellows that can crumble stone. Few fabricated materials, even advanced otherworldly ones, can stand against these soundwaves.

Pteradactix are tremendously agile fliers, taking to the skies for the Terrasaurs and quite capable of intercepting other enemies in the air or swooping down on ground forces. They are also adept at lifting their allies and carrying them across rivers or other obstacles.

This blister pack provides Terrasaurs reinforcements for any Protectors player. Bellows provide a mainline blast unit to the Faction, and the noise of their calls Disrupts the plans of enemies around them. Pteradacticx are quick fliers capable of Towing their allies into the best tactical positions. 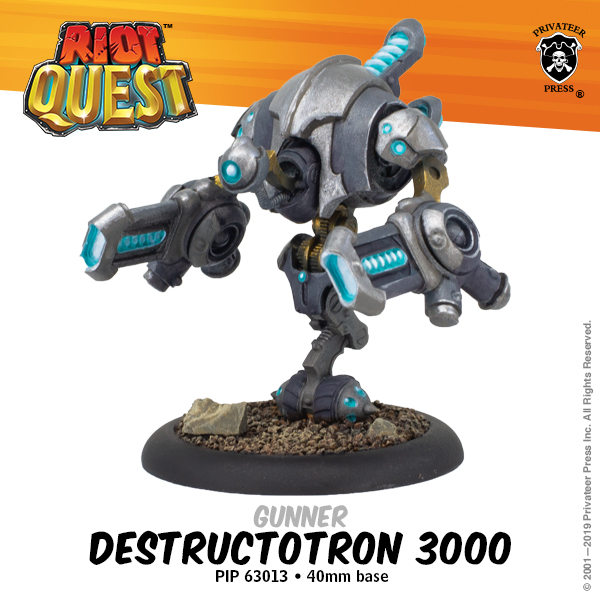 Tired of trying to best your rivals with wit and guile? Then say hello to Destructotron 3000, the most straightforward solution to incinerating the smug looks off your enemies’ faces that money can buy. You’ll love him 3000!

Destructotron 3000 is a Gunner class Hero that specializes in melting faces. There is nothing fancy or tricky to this Hero—it’s a straightforward damage dealer. Destructotron deals the most damage when shooting at adjacent enemies, thanks to Point Blank and Disintegration abilities, which both trigger when they are right next to their target. Players looking to add a ranged DPS all-star to their Riot Quest Crew are definitely going to want to take a look at Destructotron 3000.

When played in WARMACHINE & HORDES, this model is a Convergence of Cyriss Solo. 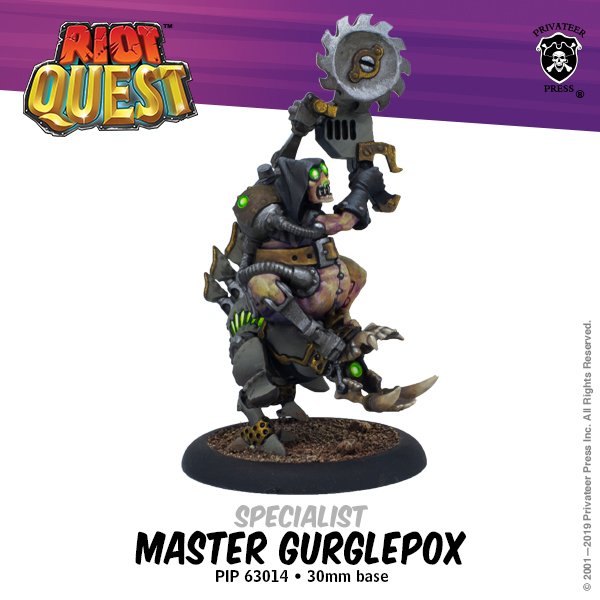 You know you always wanted to see a necrotech riding a deathripper. Need we say more?

Master Gurglepox is a Specialist class Hero that is full of tricks and utility. Like all Specialists, he can lower the Loot Cost to equip Riot Gear to Heroes. Additionally, Gurglepox can earn a player Loot just by attacking and hitting an Enemy, thanks to his Salvage rule. Perhaps his dirtiest trick is his Caustic Fumes ability, which allows him to damage enemies that are too close when Gurglepox decides to run away.

When played in WARMACHINE & HORDES, this model is a Cryx Necrotech Solo.