40K: The Armies GW Most Needs To Update 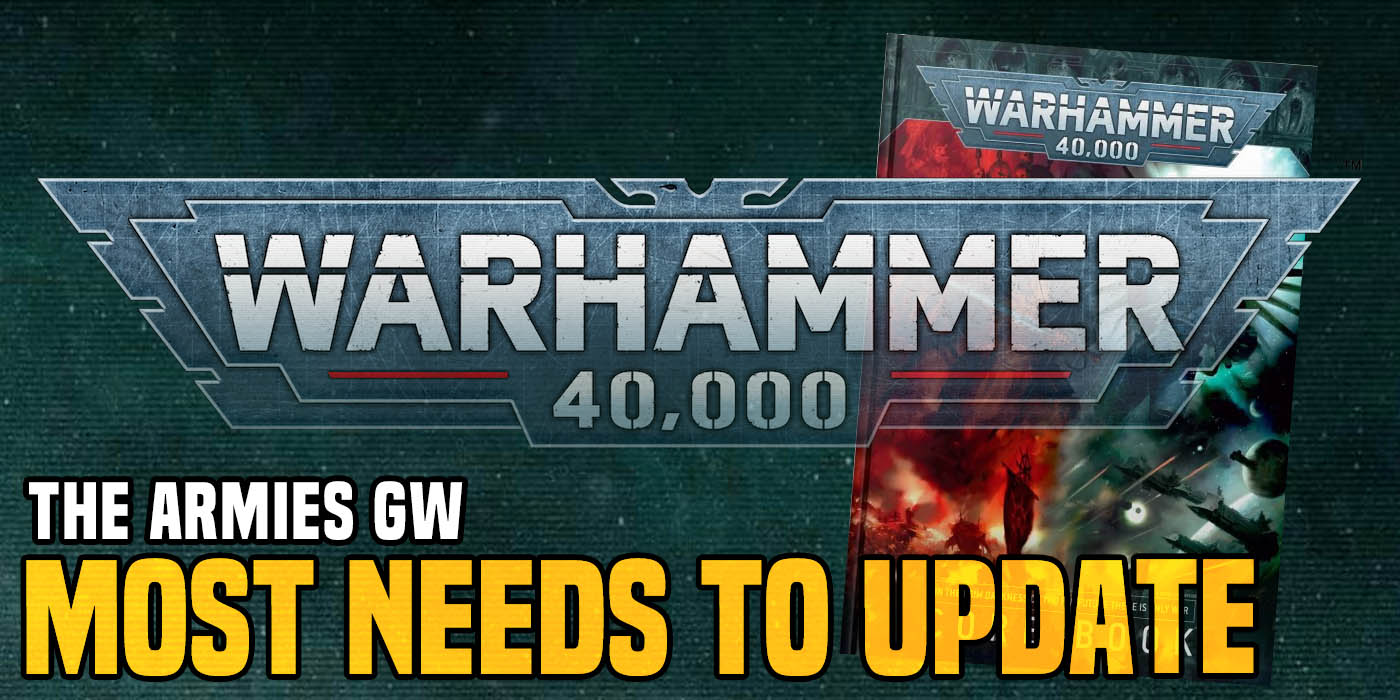 The all new Necrons are just around the corner, and Sisters of Battle got an all new plastic army. So which armies most need a giant overhaul?

I’ve done some number crunching on the most needy codexes in the game to see just who really needs plastic kit upgrades.

Warhammer 40K is quite old by modern miniatures game standards (33 years old, and 9 editions), but is also is ever-changing with additions and a roiling meta that rarely stays static for over a month. With Psychic Awakening wrapped up and 9th about to drop, I wanted to sit down and see exactly how many non-plastic kits the most needy armies have, so we can see who GW should overhaul next.

With that in mind, I wanted to dove into the codexes and online store to see exactly what we can glean from a stats breakdown.

The Dawn of 9th Edition Stats:

We are listing total number of units in the codex, and Finecast Units in the current codex so we can get a decent ratio.

The Neediest Armies in the Game

I really think the Craftworlders are the army most in need of a full top to bottom GW redo. They are a venerable faction, being a key part of the game all the way back to Rogue Trader. They have been here since 1987, and are weighted down with so many Aspect Warriors, Phoenix Lords and other units like Rangers that are core to the army but still Finecast.  Oh don’t even get me started about the Avatar.

There are 12 specifically Blood Angel finecast minis, plus random finecast Classic Marines. With the new Primaris Indomitus units on the way the Blood Angels will be into the triple digits on number of units. But they are mainly held back by a whole lot of named characters. Mephiston has crossed the Rubicon, and I think he is only the first. The BAs need another half dozen characters to make the jump, while some will probably fade away to Legends (looking at you Captain Tycho). I will be keen to see if there is a new Primaris grav version of the Baal Predator headed our way. How hot would that be?

Shadowsun got her day in the sun with Psychic Awakening, but the T’au are in an odd spot.  Their main T’au army is relatively modern and plastic.  It’s a handful of characters and all the Auxiliaries that are still finecast. All those Kroot variants, Vespids and the like need to be redone. I would assume that GW could use the time of a T’au overhaul to introduce a couple more Auxiliary races into the Empire. It’s a great chance to test the waters and drop in some new xenos from the lore onto the tabletop.  We also could use an all new redone fancy Commander Farsight. Sign me up for that.

The Drukhari are actually a compact range with only 30 units. A full third of then need updates. In a situation similar to the T’au the main part of the army is plastic and the random beasts and Archon retinues comprise most of the finecast minis. Key units that need plastic updates are Mandrakes and Grotesques. I think GW would easily make a Beastmaster kit containing all the rider and beastie options, and another for the Archon retinues. Done!

So that’s the top army contenders who most need GW love. GW most often does their standard 4-6 new models alongside a codex. They very rarely do the full to-to-bottom refreshes like we saw recently with Sisters and Necrons. Still, If I had to choose, I think the Craftworld Eldar are the one army in the game that really needs it as they have been backburnered for over 20 years now.  I think all the other armies on the list can deal with the standard Codex release pattern, but I hope GW takes care of the Craftworlders before we see new armies added to the game.

~Which of these do you think GW will address first?