D&D: Realms Beyond – Ashes Of The Fallen Will Take You Back To 3rd Edition 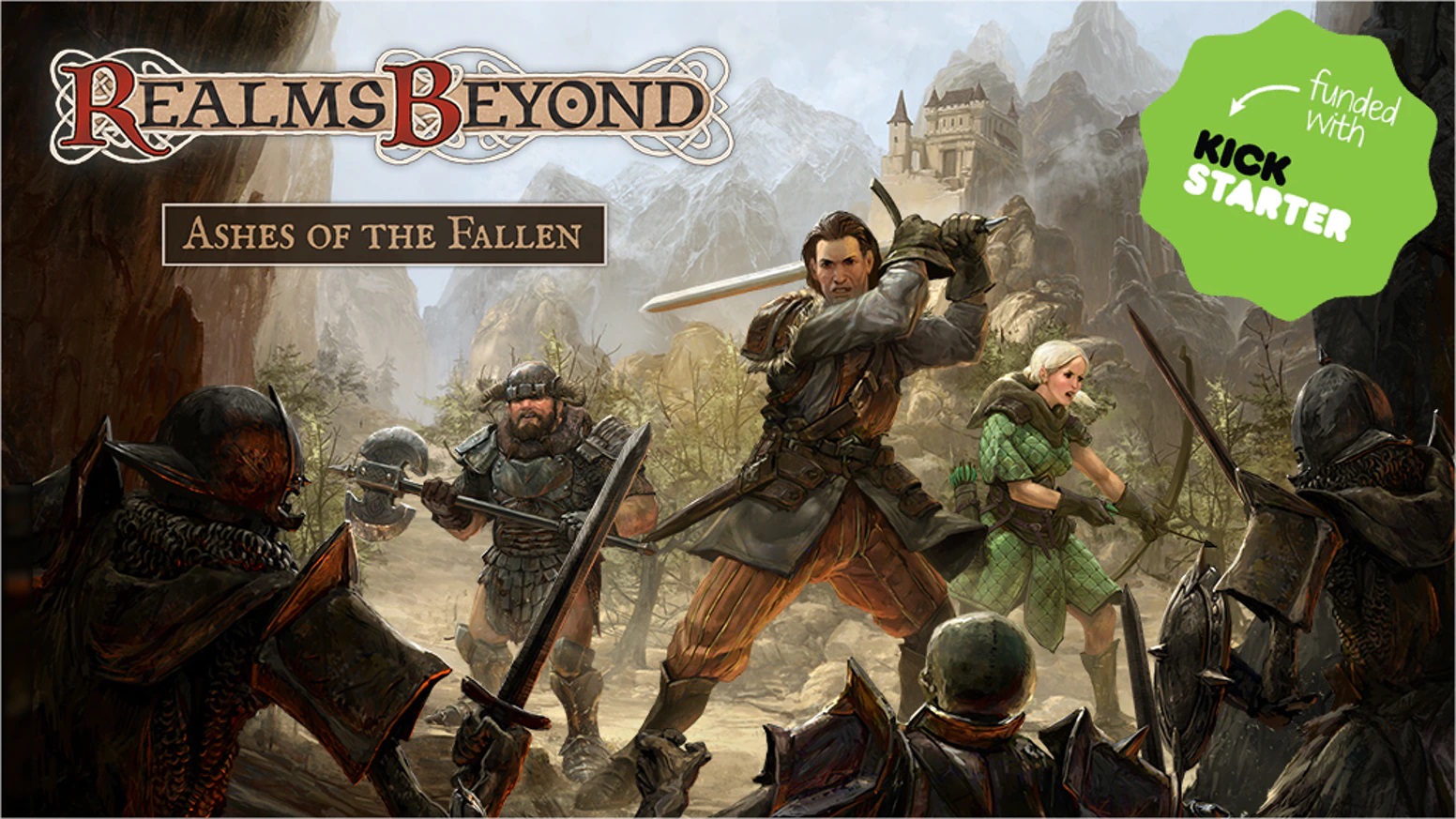 In a world of 5th Edition games, one developer is charging back to 3.5 with a new cRPG out later this year, Realms Beyond: Ashes of the Fallen.

Realms Beyond: Ashes of the Fallen is a throwback to the days of 3rd Edition D&D, where every fighter Power Attacked until they became irrelevent, somewhere around level 12, unless you were playing with expansions that changed that. And while we don’t know what exact rules they’ll be using in this upcoming computer game that takes after Neverwinter Nights and other games with 3rd Edition’s DNA written in them, there’s a safe bet that you’ll find all the old familiar standbys waiting in the wings. Because Realms Beyond: Ashes of the Fallen is based on the 3.5E rules outlined in WotC’s OGL. Which is still active and still open today.

That’s where Ceres Games comes into play, with their retro-style–and if you’re thinking 3rd Edition isn’t retro, let me point out that the game is twenty years old, which is old enough to have opinions about Joe Rogan, but still young enough to think that anybody else might want to hear them. Which I guess is retro. I know feats like Power Attack and Combat Expertise certainly are, and they’re highlighted in some of the game art we’ve seen so far. And that’s what Ceres Games is hoping to bring across with this new game, a jaunt back into the turn-based tactics of 3.5E, where you’ll create a custom party of adventurers, take them through dungeons, and fight trolls, dragons, and all the other usual suspects. 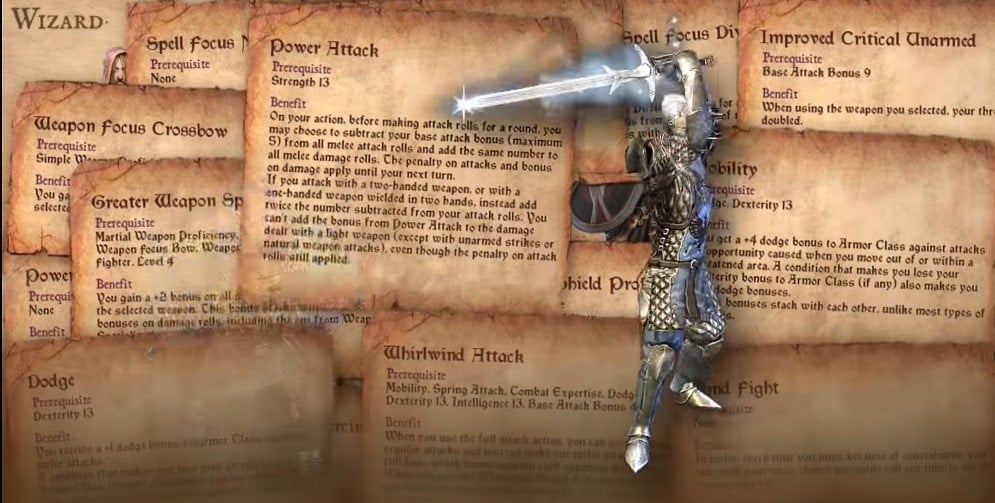 Realms Beyond: Ashes of the Fallen was a Kickstarter success back in 2018 with an original release date of February 2020, but that time has come and gone–it’s a tight enough turnaround even without the rise of COVID. However, the game is still in development, and as we mentioned, it’s in Beta right now–at least the combat part of the game. Check it out!

The long-awaited combat beta of Realms Beyond has been finally released to Kickstarter backers whose reward tier includes combat beta access. Assemble your party and enter the Halls of Challenge to brave tough fights that will put all your skills to the test!

The purpose of the combat beta is to provide feedback and bug reports to us, so if you are among those with access to it, we ask you to report any issues to us. The easiest way to do so is in our official Discord server, where we have opened a dedicated combat beta channel. You can also use our official forums here (account registration required).

While the combat beta is not available to the public, there is no NDA on it. You can take screenshots, talk about your experience on forums and social media, or even record yourself playing it on YouTube or Twitch.

Since this is essentially a closed beta, please keep in mind that there are still bugs to be ironed out, balance is not perfect, and some features are missing. We will deal with those issues as we receive your reports. As of now, we have not yet implemented a savegame feature. If you want to speed up animations in combat, hold down <SPACE>. If you have any questions – or suggestions – feel free to contact us about them.

Happy playing, and may you survive the trials of the Halls of Challenge!

You can see some of the combat featured above. They have the Halls of Challenge mode up now for backers of the original Kickstarter campaign. No word on when, or if, there will be a beta test for players who missed that boat. But as you can see the game’s bones are there. These textures are a loving homage to the D&D video games of the past. The Aurora Engine might have made Neverwinter Nights shine, but this feels more like the Infinity Engine of Baldur’s Gates past, even though there’s a lot here that’s 3D, it has a more artistic feel to it. 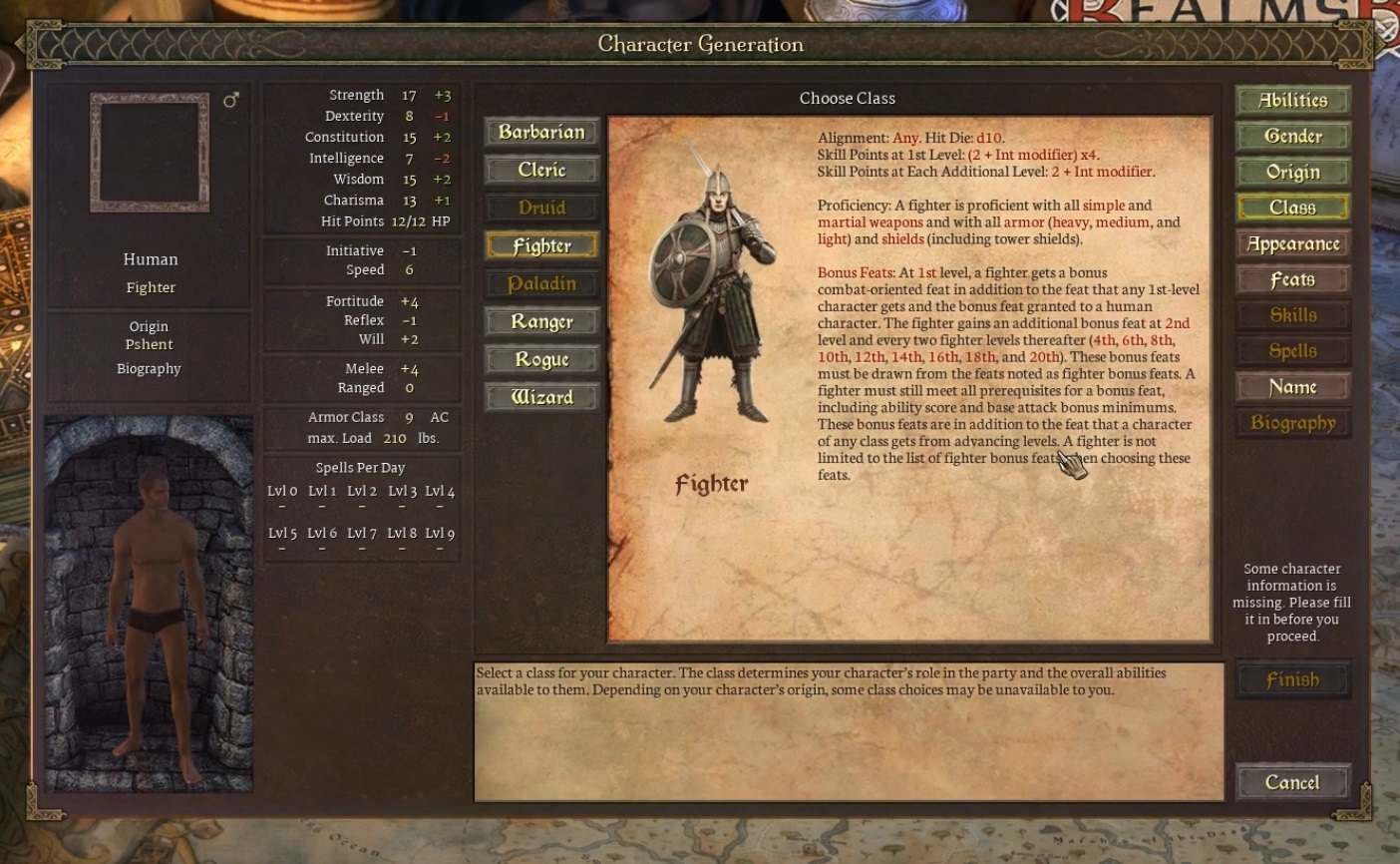 As you can see, some of the features haven’t completely been implemented yet. As of right now, they haven’t put all the classic 3.5 classes in the game–you can’t even save the game yet, but with 2020 rolling on, the game is in a rather impressive spot for having only 2-ish years of work. It’s not reinventing the wheel, or anything, but if you’re familiar with games of D&D past, you know exactly what you’re getting here. Look at these spell icons–straight out of classic BioWare/Black Isle games: 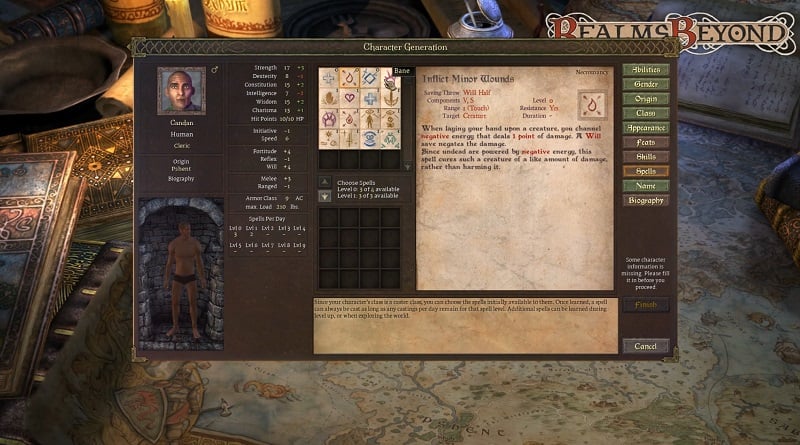 When we talked about the game last year, one of the big features was character creation, and you can see how far it’s come from those days: 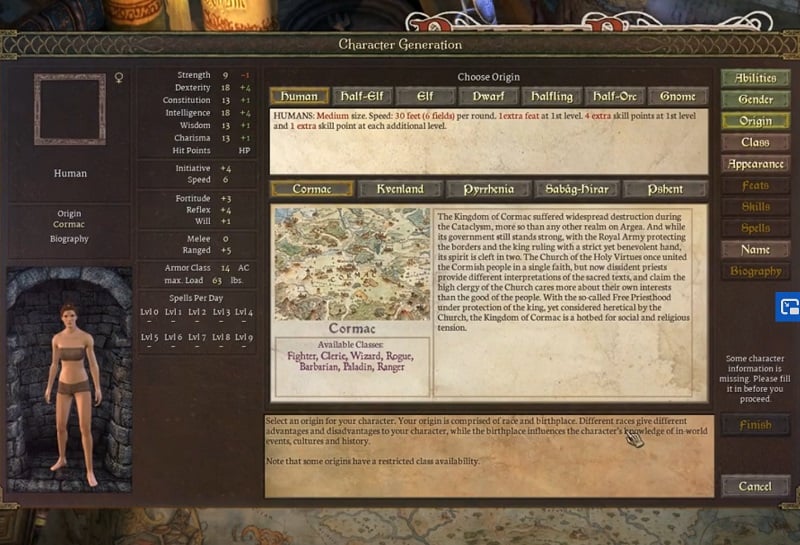 You can now add a place of origin which influences your character–mechanically you get certain advantages and disadvantages, and classes might be restricted. In the example here, if you’re from Cormac, you can’t play as a Druid. And here’s a look at some of the fixes they’ve patched in.

As we’ve said, it’s the full 3.5E enchilada, so if you’re hungering for that experience, this is the game for you. Here’s an overview of everything you can expect from the game: