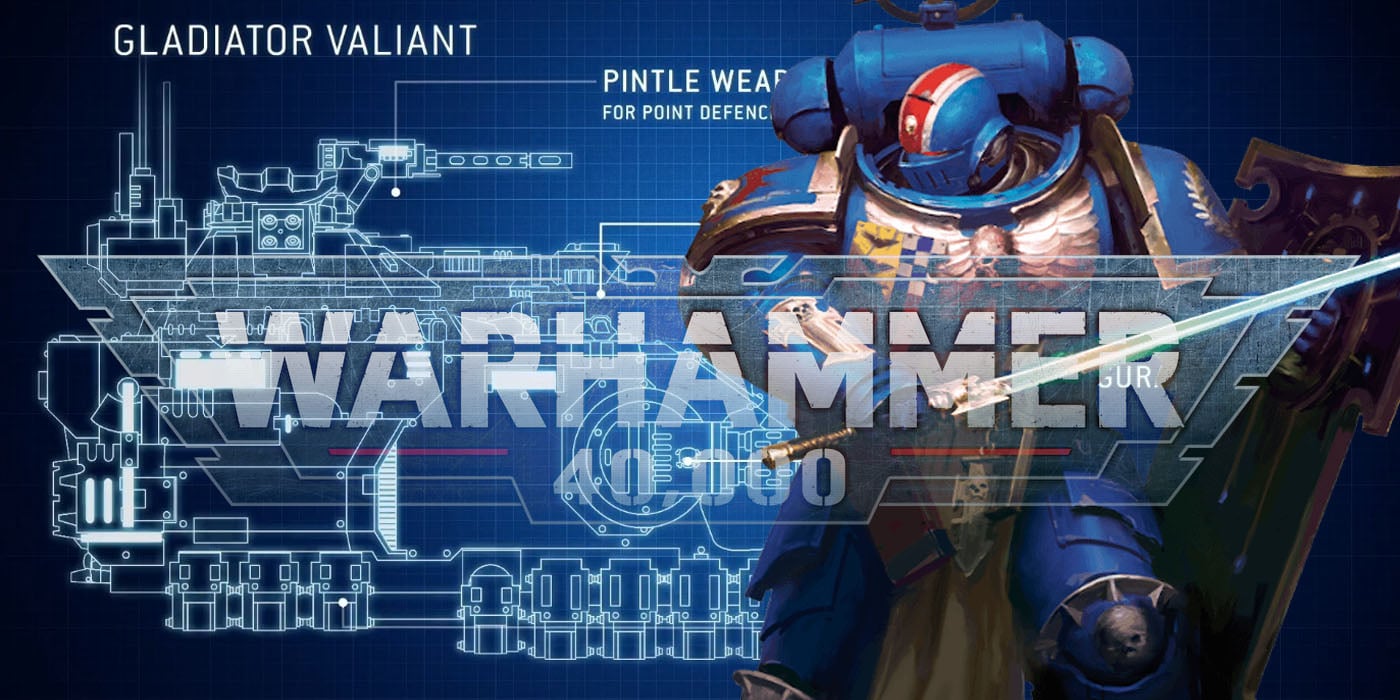 It seems like not a week goes by these days without the announcement of another new Space Marine unit. These week we not only got the announcement of a new tank (or 3) but eagle-eyed fans spotted some new units in the quick preview of the upcoming Space Marine Codex 2020. Today lets take a look at some of these new(est) units and make some guesses about what they do. 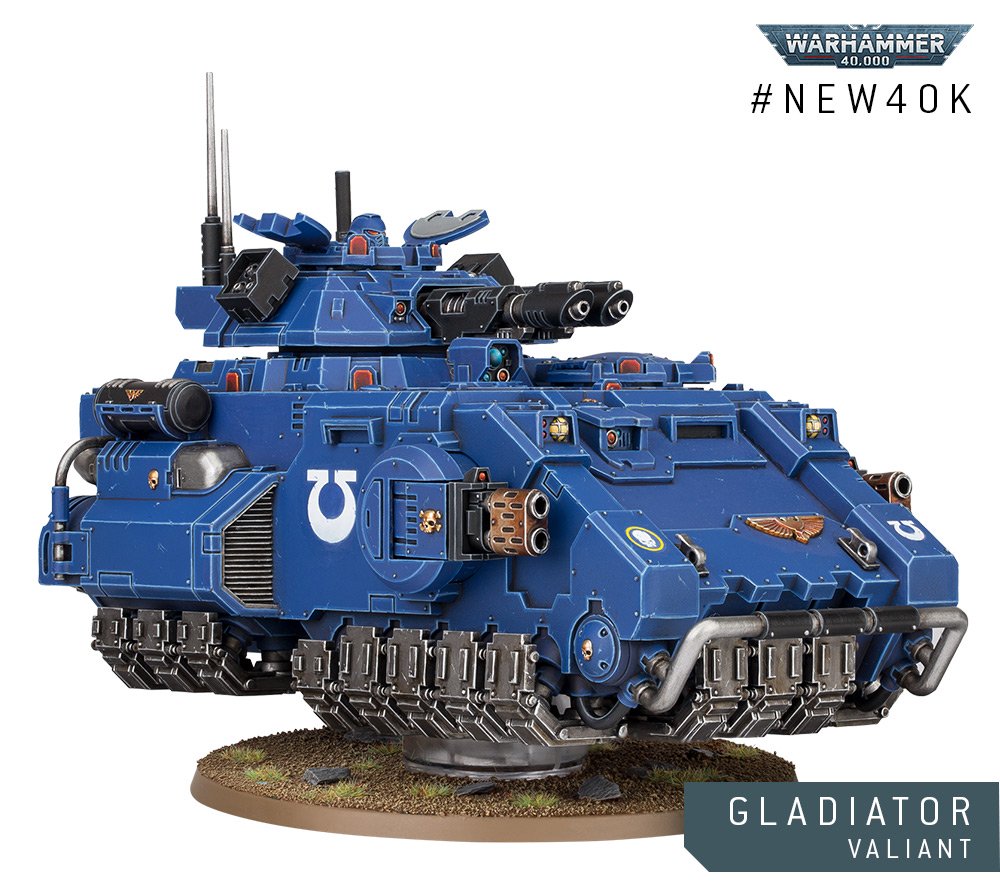 The Gladiator is the new Space Marine tank announced this week. It’s been shown off as the Primaris replacement for the Predator, built off of the Impuslor chassis. It comes in three flavors. We’ve got the Valiant, shown above. 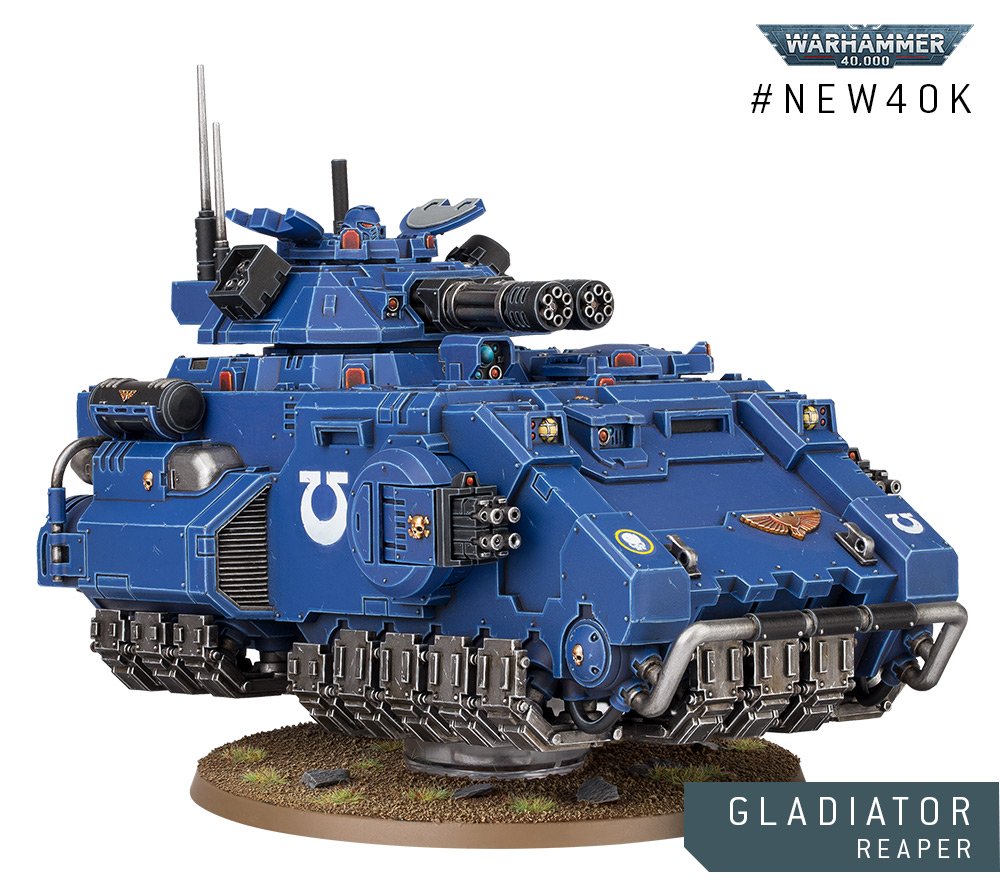 Next the anti-infantry Reaper. 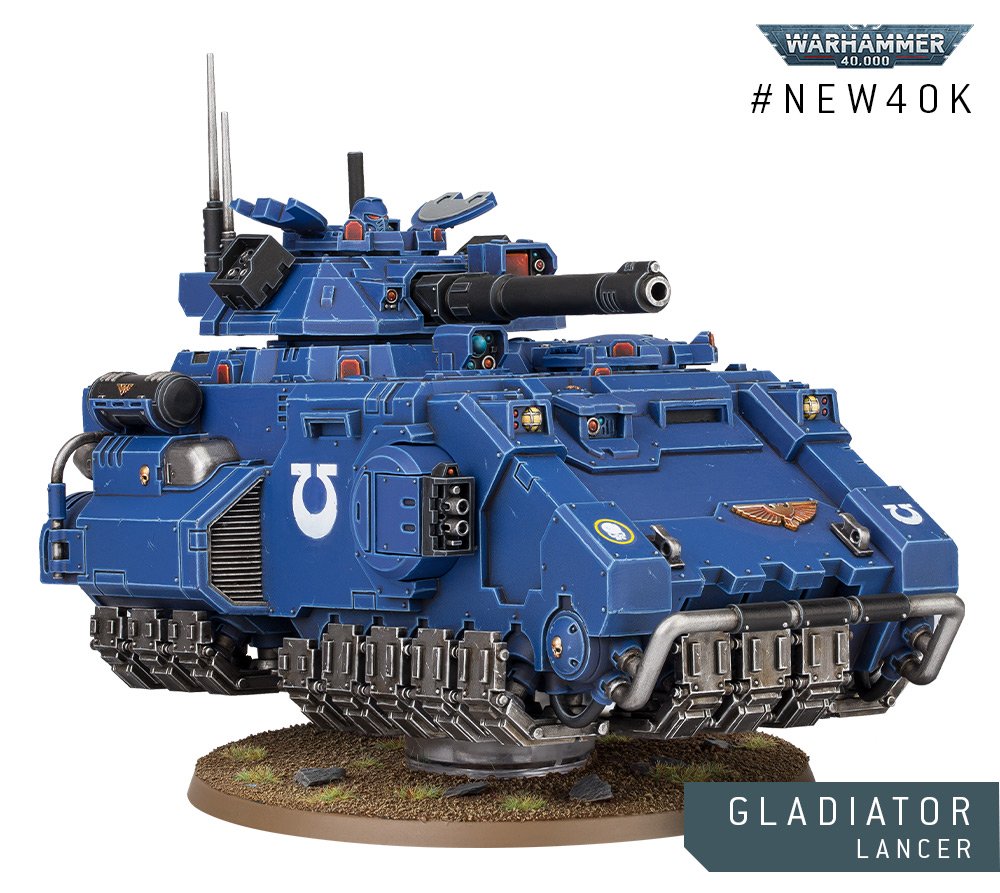 Lastly we’ve got the long range Lancer. Notice that two of the variants are set up for anti-tank work.  While we don’t have any official stats from the tanks yet we can make some educated guesses.

Since this is based off of the Impulsor we can guess that its core stats are going to be pretty similar. The Predator for instance has similar states to a Rhino, which it is based off of, with an additional wound. I wouldn’t be surprised to see the same here. I also assume that the Gladiator won’t have any transport capacity. For weapons we also have some hints based on pictures and the descriptions we’ve been given.

The Valiant is the version we know the most about. It’s got two Las-talons in the turret and a pair of sponson mounted multi-meltas.  These are all known weapons and gives it some good anti-tank firepower, effectively that of a Predator Annihilator with two extra multi-meltas! While it’s guns are shorter ranged now that tanks don’t take a -1 to hit form moving, and its likely 14″ move, means it’s plenty of threat range. In addition to those main guns we’ve also seen that the tanks can mount a pintle heavy sutbber (of some variety). The turrets also seem to have some sort of launcher on them, these might just be auto-launchers to allow it smoke itself, but they also might be some kind of frag launcher- the Repulsor can chose between the two.

For the Reaper we again know what the main guns do- in this case we’ve got a pair of Heavy Onslaught Gatling Cannons, giving us a nice 24 shots for the main turret. It’s also got a new weapon called a Tempest Bolter. This seems to be a middle ground between a 2 barreled Storm Bolters and 6 barrel Hurricane Bolter. The Tempest’s 4 barrels however do see longer than the Storm Bolter’s so I’m thinking it’s going to be effectively 4 Bolt rifles- this could give us another 16 shots- meaning this take can put out some serious anti-infantry firepower.

Lastly we don’t know much about the Lancer other than it’s a long range anti-tank sniper. It’s gun looks very similar, though not quite identical, to the Heavy Laser Destroyer so I’m guessing its a version of that, maybe just a regular Laser Destroyer. In addition it does appear to have a similar optical sight to the one that allows Repuslor Executioner to fire twice, meaning it may have the same ability. We also don’t know if the sponson weapons are looked to the tank or if they have options (the Lancer comes with just a pair of Storm Bolters). Either way you gut it these tanks look nice and seem to pack a real punch. They are the dedicated battle tanks Space Marine players have been wanting for some time. 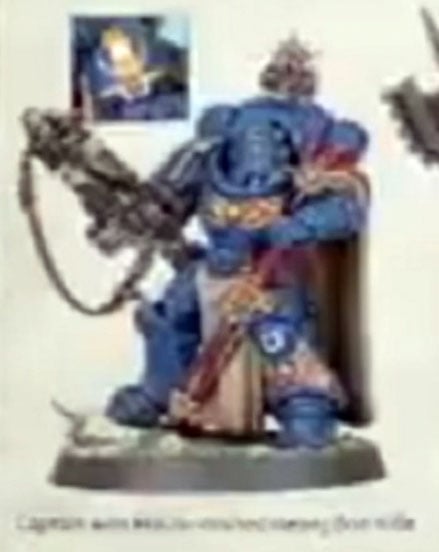 I’m putting these two together because I have a feeling they are related.  Both of these were seen in the previewed table of contents and we think we’ve seen pictures of them. The Captain model, whose’ caption you can just barely make out,  seems to wearing heavier than normal armor. Indeed it seems akin to the Gravis armour worn by the Eradicators. Since there is already a Captain in Gravis armor I’m not really sure why you’d need another entry for one, and not just say a new weapon option. It’s possible they get some kind of other special rule, but who knows. It’s also not clear what the Heavy Bolt Rifle is. It does look bigger than a normal one, and almost appears to have two barrels (some people have said its got a bit of a grav look to it). This guy remains a lot of a mystery. 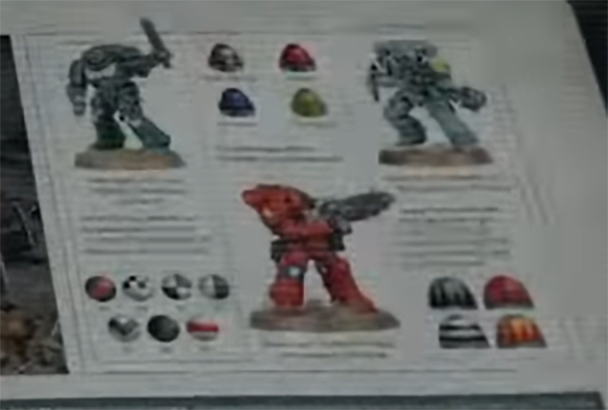 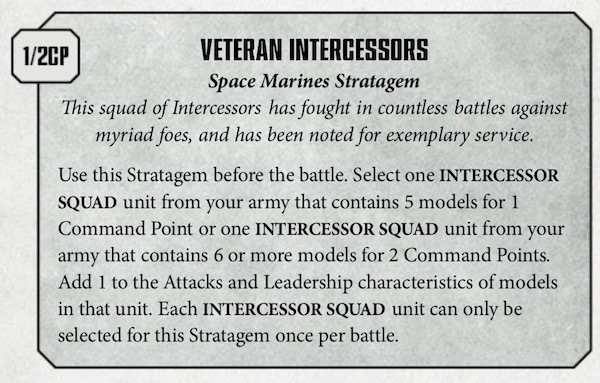 This was another entry spotted in the Table of Contents. Now we’ve already got Veteran Intercessors as a unit, you use a stratagem to upgrade regular Intercessors. It looks like in the new book this will be going away and they will get their own datasheet. I’m a fan of this as I don’t like the upgrade stratagems much, and I think the CP cost meant that no one was taking them. It seems likely that the Veterans will keep the +1 attack and +1 LD over regular Intercessors. The real question is will they also get new weapon options (and a box) like other Marine Veterans get, or will they remain the same as before? 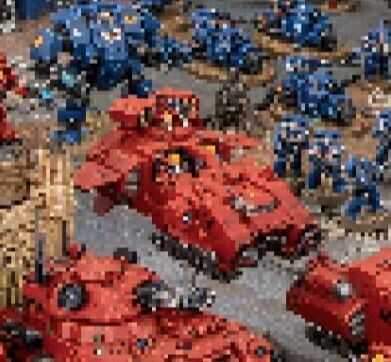 The Table of Contents also has entries for three variants of the Storm Speeder, Hellstrike being the only legible name. While we know nothing about this unit I’m guessing its the mysterious speeder that showed up in a really blurry picture a while back. Indeed we can see that the picture contains both the new Outriders and the newly announced Gladiator Reaper so this seems like a good guess. As for it’s load out… well that’s pretty much anyone’s guess, though I’d wager that something called Hellstrike would have some missiles.

Let us know what you think of the new units, down in the comments!

Author: Abe Apfel
Abe is that rare thing, an Austin local born and raised here. Though he keeps on moving around, DC, Japan, ETC., he always seems to find his way back eventually. Abe has decades of experience with a wide range of tabletop and RPG games, from historicals, to Star Wars to D&D and 40K. He has been contributing to BOLS since almost the start, back when he worked at and then owned a local gaming store. He used to be big into the competitive Warhammer tournament scene but age has mellowed him and he now appreciates a good casual match. He currently covers 40K tactics and lore, as well as all things Star Wars, with occasional dabbling in other topics. Abe remains in mourning over the loss of WFB to this day.
Advertisement
Editorials Miniatures Space Marines Warhammer 40k Warhammer 40K 9th Edition
Advertisement 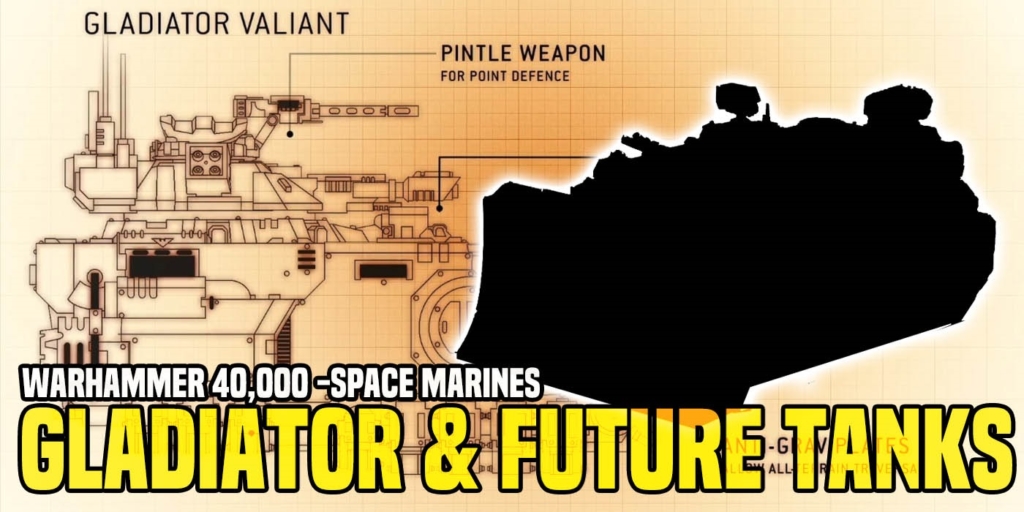