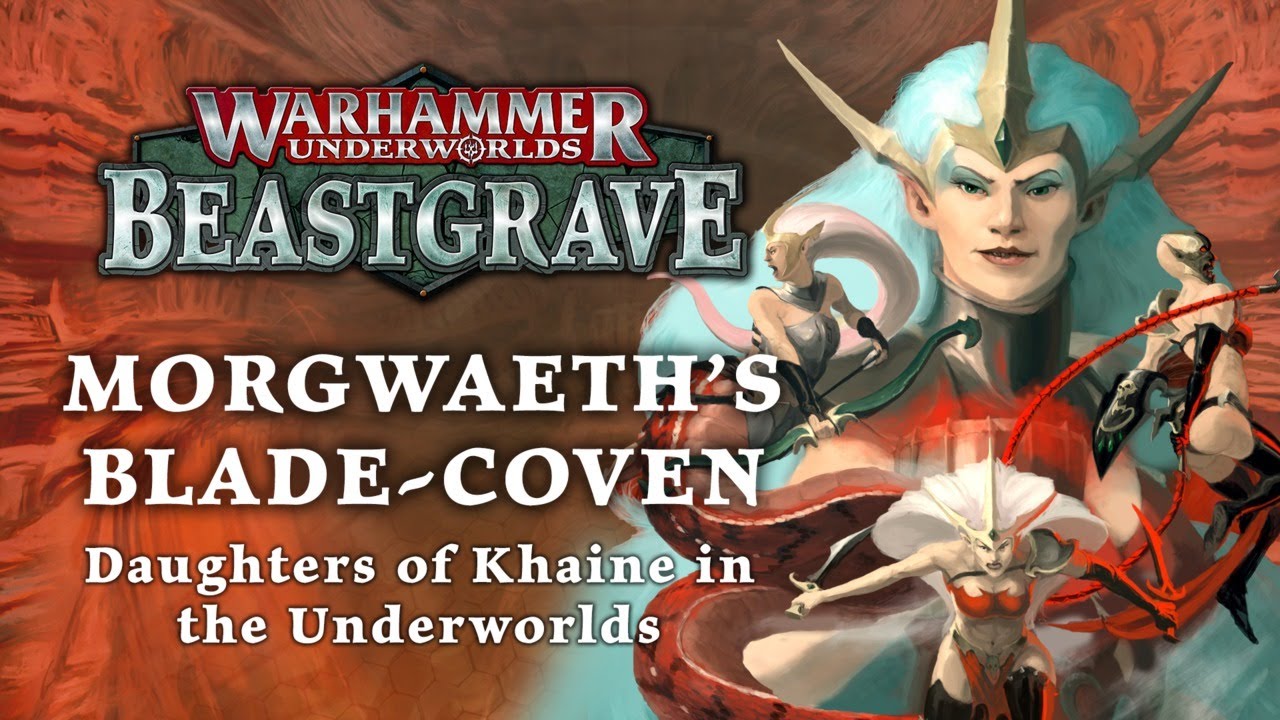 The new Daughters of Khaine warband releasing next week for Warhammer Underworld, has an aggressive play style that’s high-risk, high-reward.

Alongside the new Ironjawz warband, the Daughters of Khaine are bringing a little bloodshed of their own to Beastgrave with Morgwaeth’s Blade-coven. These fancy murder queens bring a lot of speedy fun to the Underworlds, albeit at the cost of stability. Here’s my quick take on the new Warband, and a few tactics to get the most out of them. 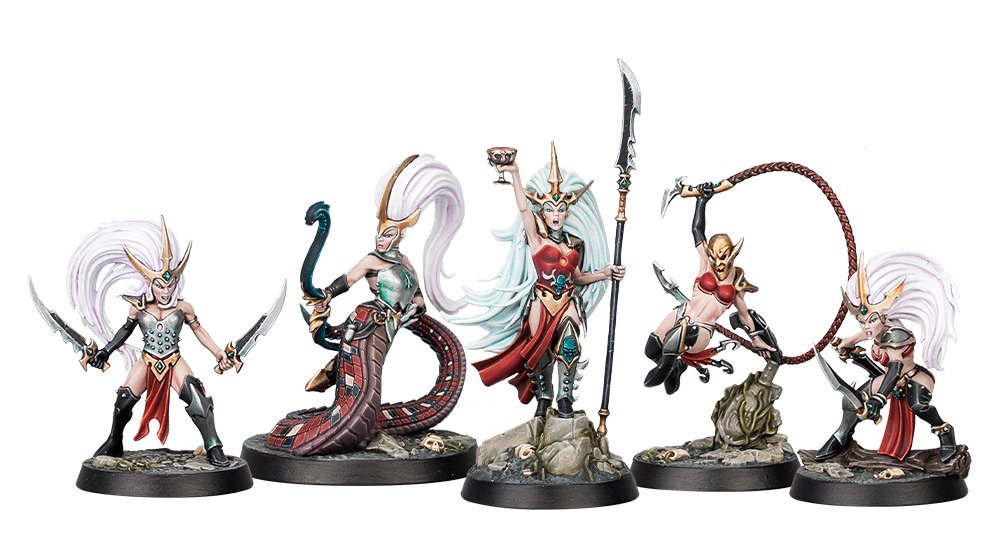 As expected of a warband of mostly naked aelves, the Blade-coven is pretty squishy, with 3 of the 5 fighters only having two wounds and only dodge for their defense. However, their inspire mechanic makes up for it, able to inspire either on the third turn or, should Morgwaeth still be alive, any time an enemy is taken out of action. 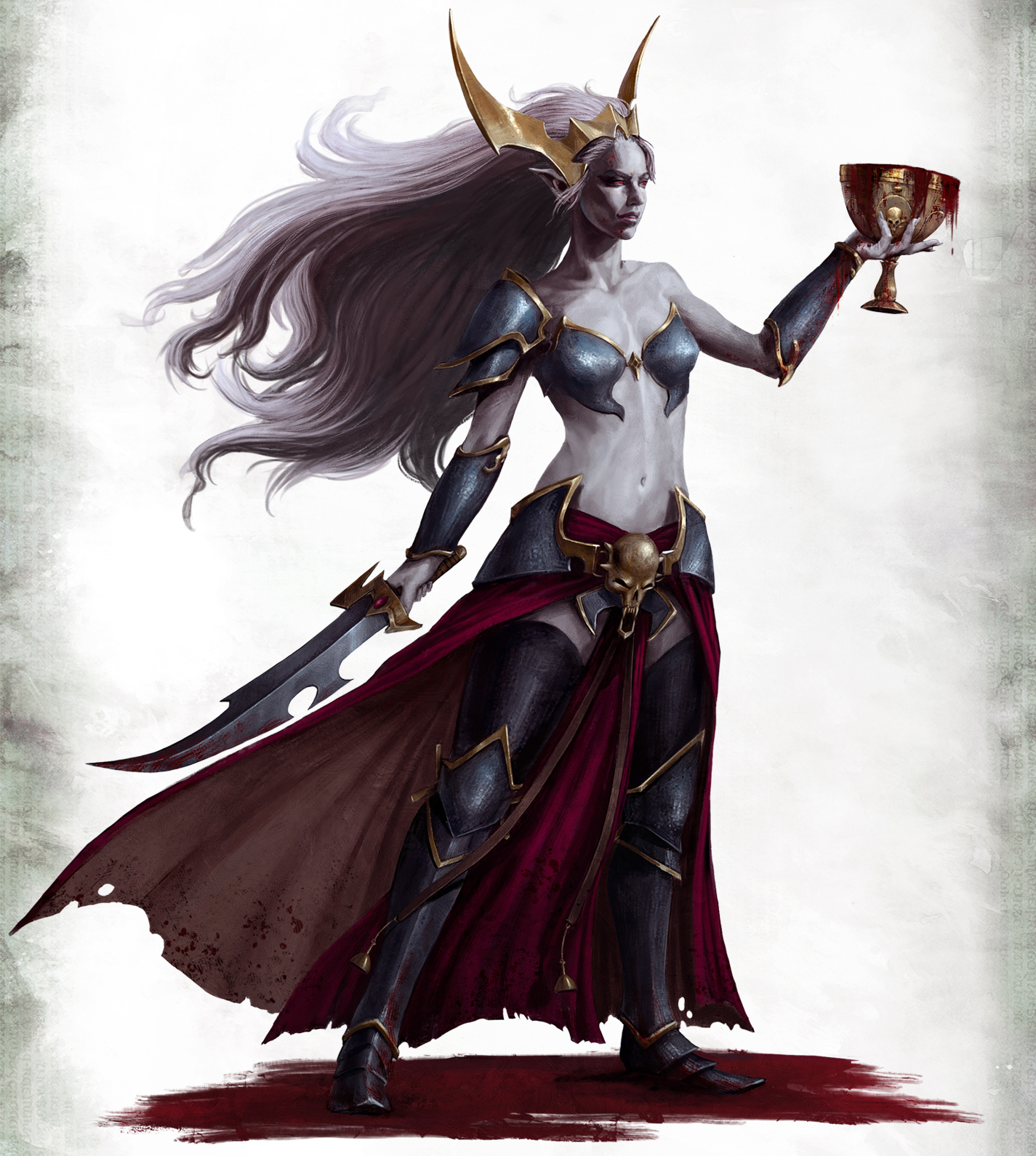 This is a lovely representation of the Khaine cult’s love of bloodshed, and how they draw power from the battle as it wears on. Getting a kill isn’t hard if you coordinate well, because every fighter can deal an extraordinary amount of damage, even before inspired. Morgwaeth herself doesn’t have any exceptional rules, other than her ability to inspire her allies, but her Glaive of Khaine can dish out a high volume of attacks, and with the hammer sigil she is much more likely to score a hit. Kyrae, her Melusai companion, also doesn’t boast any special abilities, but once she’s inspired her bow attack gains the hammer sigil, increasing its likelihood to deal damage, and her knife gains an extra attack and damage point. 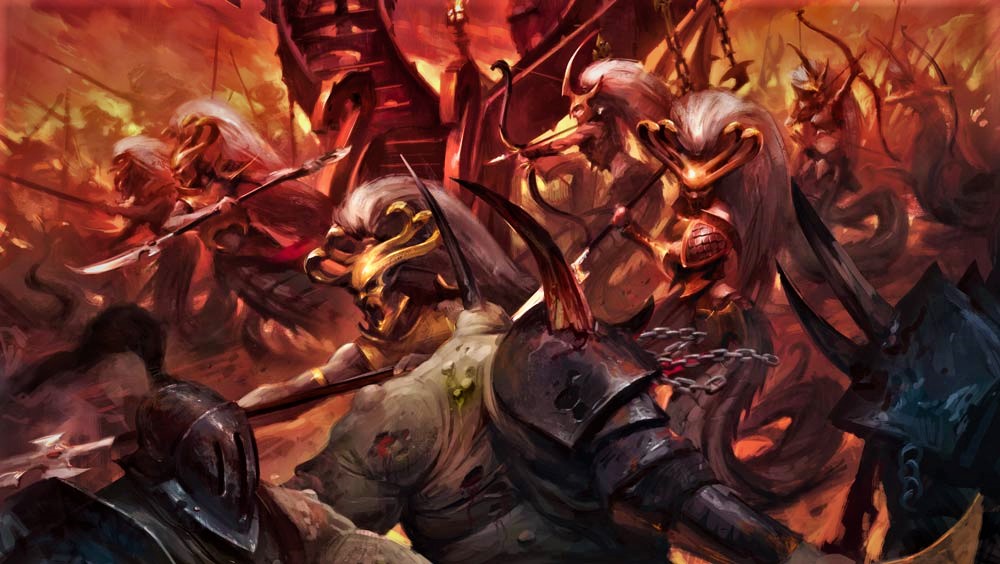 Khamyss, the solo Sister of Slaughter, absolutely lives up to that name, since she cannot be driven back, has a Combo attack with her Whip and Buckler, and can use her reaction to attack with her Bladed Buckler a second time. As a finisher, or even an instigator against weaker opponents, she excels, and can lay down a massive haul of damage. Closing out the party are Kyrssa & Lethyr, a pair of Witch Aelves with a pair of nasty blades. Kyrssa deals more direct damage, increasing her attack damage on a critical hit by 1, and once inspired Lethyr gets to double her damage if she rolls 2 or more successes with her 3 attacks. Since it isn’t hard to get them inspired, this is a warband designed to kill. Just don’t push too far away from the pack, or you’ll see just how thin that cloth armor can be.

Will you be picking up the new Warband?