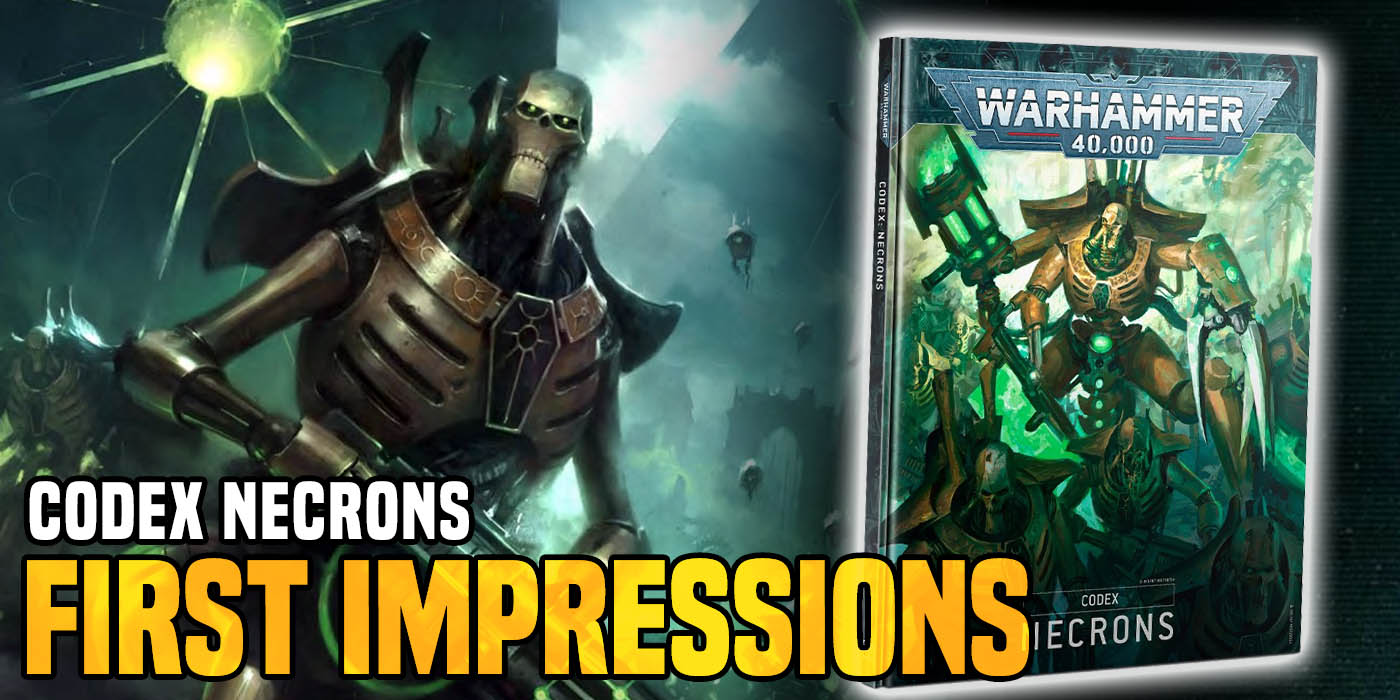 Goatboy here and just like the new Marine codex let’s go through some highs and lows from the new Necron codex.

Overall it is a pretty cool little book and a complete overhaul of how armies are going to be different.  This is a huge thing as we know the Necrons have languished a bit in 8th edition as their codex always felt overcosted and a bit just weird for the edition.  They really only had one “build” that did well and while it wasn’t bad – it just needed some help.  Thankfully this book does it with a ton of new units, new rules, and a completely overhaul in how this book works.

First – the changes to reanimation protocols is pretty neat.  It tweaks it a bit and while not always the best for multi-wound models it is pretty dang mean versus a lot of other armies.  This is most likely why you saw Immortals and Warriors stay at one wound as it lets you get the most chance to get models back in a unit.  I don’t know how good it will be with some of the damage potential in the army but it looks to be built to help the basic boots stay on the table – while the bigger wound options are less benefited by it.  It is still interesting and I think overall a good change. 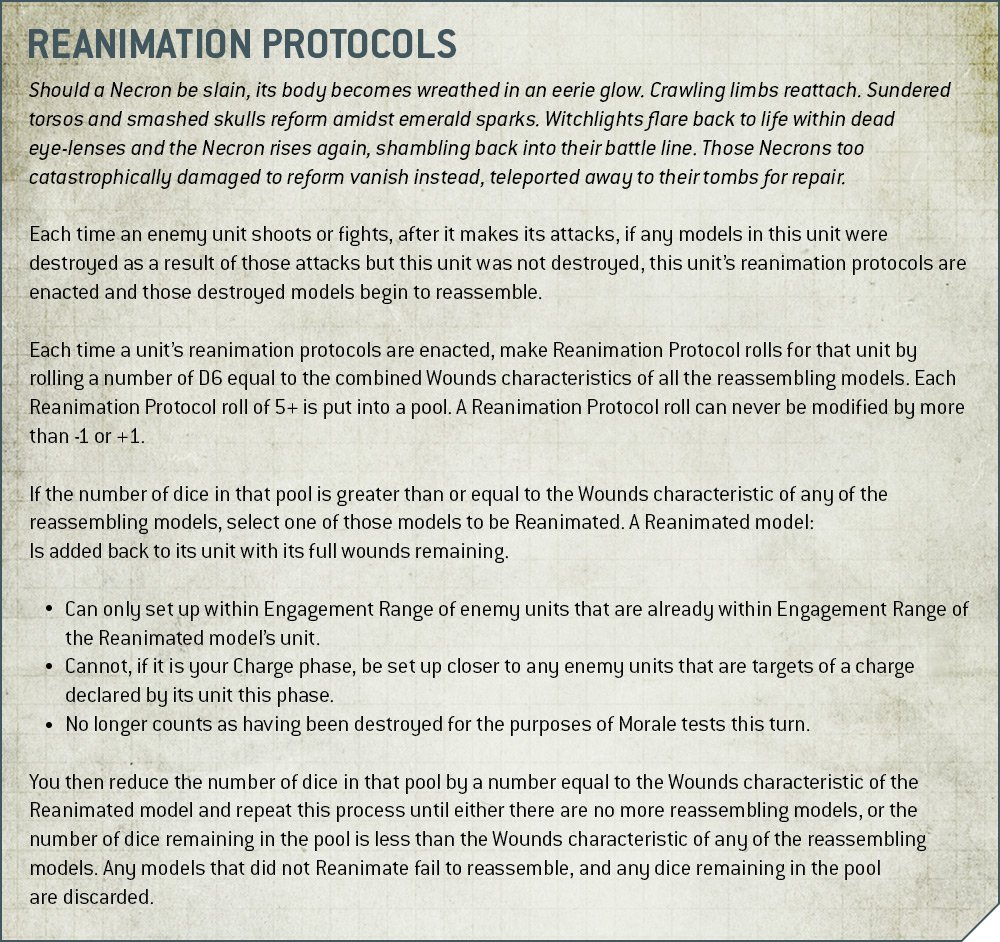 There are a few other tweaks as well.  Quantum Shielding has a big change/nerf in that it is a flat 5+ inv save mixed with ignoring wound rolls of 1-3.  This means those tanks are going to not be as much of a pain in the ass to big weapons as a wound going thru has a good chance to damage it.  I won’t lie – the whole do 5 damage and watch that Doomsday Ark ignoring the damage was a bit disheartening.  If you had a heart and all.  Tesla goes back to being auto hits on a 6+ without any rule saying it can’t happen in overwatch.  Of course with the changes to Overwatch it doesn’t matter as much so its ok.

On the Stratagem front they got a bunch of different options.  Stratagems to help you hit better, wound better, and survive better.  We used to always talk about how the Flayed ones could be interesting so with the new models and a double attack Stratagem we could see these guys showing up.  Heck there is a very rough assault army here even though they didn’t get any advance and charge options I have seen yet.  They do have an auto move 6″ advance so while you won’t get to charge – you will be a heck of a lot closer.

A new interesting rule is the whole Command Protocols option.  As a Necron Player you get to choose how your army interacts turn by turn which is pretty interesting.  It feels a bit complicated and I expect that using the Cards will make it easier.  You stack a set of 5 abilities out of 6 and as you go turn by turn you can pick one of the Directives – or you get both depending on the Dynasty you are.  Most of them are nice bonus’s to your army so they are not bad as you get them for Free.  It again makes you think how your army should play turn by turn so it is a bit harder to run these guys than they were before.  Still it is a neat little bonus and makes you feel like a true Commander of a legion of deadly robots.

Silent King: Oh – the Silent King is a monster.  Like that guy is probably one of the best Special Characters in the game and I expect people playing against him will just try ignore and win the game.  He is expensive and deadly so while cool he might not fit so well in the Competitive scene.  I think characters like this are interesting just like how we have some of the Daemon Primarchs running around as well.  He is also a Supreme commander so you can see how he can easily fit into armies.

Monolith: The Monolith got some updates too – like becoming a Lord of War.  I am not sure if that is the right choice but it is a much more of a pain in the butt now.  It has more wounds, can do more damage, and it has an auto hitting close combat attack at -3/flat 3 damage.  This guy is gonna suck in all your nonsense, blast you with its guns, and just be a big fat pain in the butt.  I can see some armies just using it as the wall of doom.  Oh and it isn’t crazy expensive beyond just the CP cost you have to pay for it.

C’Tan: My favorite unit so far is the C’Tan’s as they feel really powerful.  Thankfully for opponents you can only take one per Detachment – so while sad you can’t just take a bunch it is probably for the best.  They all have the only take 3 wounds per phase so they will be a bit rough as they move around the table.  I am hoping we see some other kind of plastic C’Tan model show up – and if not will see more Malignant sorcery models get some Necron bits in the future.

The biggest thing you can say with this book – is that it is a complete refresh of the army.  It is pretty insane to think of all the new models will see out there and how this book is a rework of everything we know about the killer robots from outer space.  New Crypteks, new C’Tans, and a whole slew of new abilities make this a very exciting release.  Oh and the point set up at the end – amazing.  It makes building these armies so much easier.

I will go into more depth about this army as I look at a few army lists in the coming weeks.  After that we got Chaos coming with a Death Guard book I feel like I really need right now during this time at home.

All Hail The Silent King! 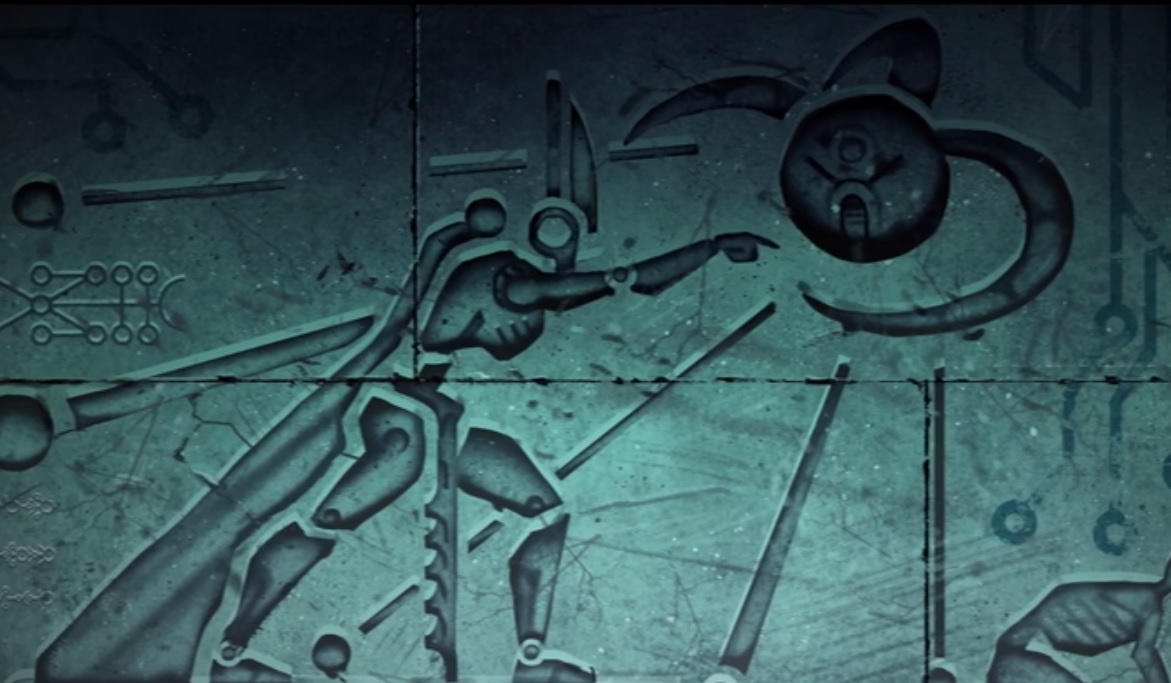 Author: Thomas / Goatboy
Thomas Reidy, aka Goatboy, the ever-evil member of BoLS. I do arts, play 40k, and even paint a lot of stuff. I have been playing Warhammer 40K since the 1990s, and have won multiple national events including Adepticon and GW GTs. I've been writing for BoLS for 15 years. Look at my Instagram to see what I am working on - or working on for someone. I am always doing something hobby related.
Advertisement
Editorials Necrons Rules Warhammer 40k Warhammer 40K 9th Edition
Advertisement 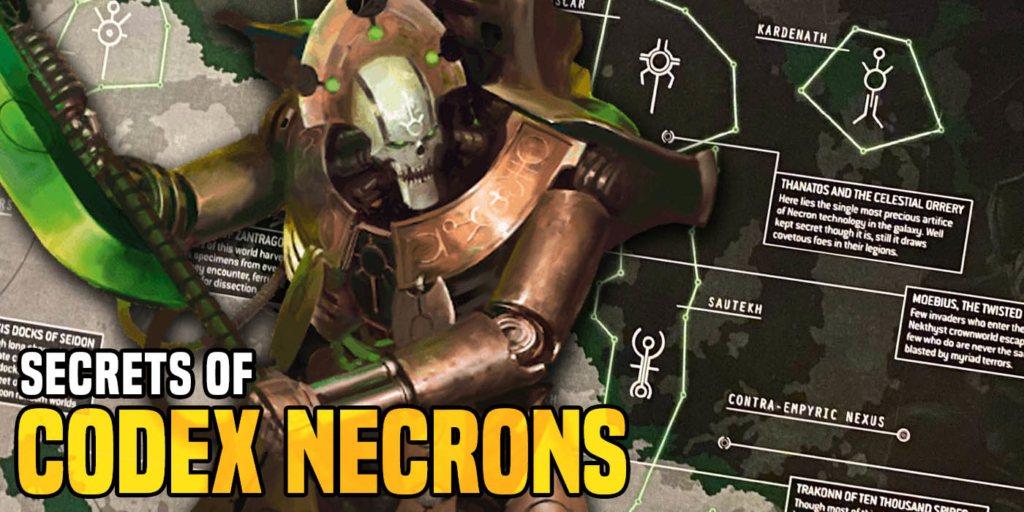