AoS: After Morathi – What Comes Next for Broken Realms? 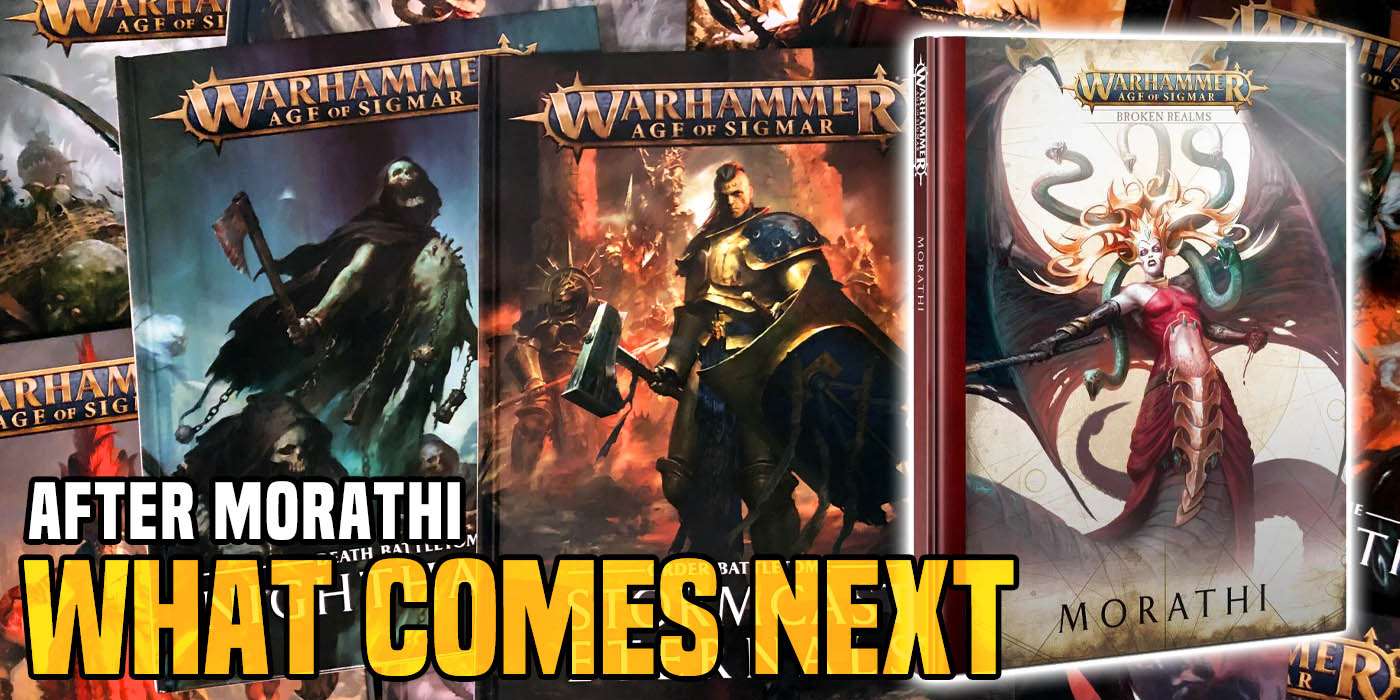 The Mortal Realms lore is progressing, and anything could happen, but a few things are more likely than others.

Now that Broken Realms: Morathi has been out for a bit, the narrative of Age of Sigmar has rocketed forwards, likely setting us up for the next edition. Power has changed hands, new warriors have arisen, and an ancient evil has slithered back into the Realms. But what could be next, you might ask (I certainly did). So here are my theories for the next installments of Broken Realms, ahead of the very likely 3rd edition.

***Warning! Spoilers Ahead. If you haven’t read the events of Broken Realms: Morathi and don’t want a lore spoiler, turn back now!***

The Story So Far

So Morathi, the Shadow Queen and High Priestess of Khaine, has in fact become the new Khaine goddess, with the help of varanite from the Eightpoints and a wealth of Stormcast lives. In addition, she has fostered a strong alliance with the Idoneth Deepkin, bringing them more in line with her way of thinking and away from their creator, Teclis, who shunned them and wanted them destroyed. Unfortunately, as she drew the essence of Aelven souls from the belly of Slaanesh, and turned the eyes of Order to the Eightpoints, Slaanesh was able to slip his bonds and rejoin his brother gods in the Great Game. This will of course not be great for the Mortal Realms, but what does it mean for the future?

My guess is that, after his long self-imposed exile, Malerion will realize he needs to make himself known in the Realms again to face off against Slaanesh, and possibly put Morathi back in her place. Considering how he is described in Realmslayer, however, it is possible he will ally himself with Chaos as a new faction, and unleash his Shadow Daemons on his old allies. This is admittedly unlikely, but given the fractious nature of the current alliance of Order, anything could happen. It is more likely he will be Order on paper and in-game terms, but his own faction in terms of lore.

We will also likely see a play by Nagash to capitalize on the diminishing strength of Sigmar to eliminate one of his oldest foes. There are rumors that Soulblighted are getting an update in the near future, and this could be Nagash’s play to take out Sigmar’s human followers while also weakening the cults of Chaos. Katakros also can’t be happy to see the holdings he fought so hard for under threat, so there may be a push by the Bonereapers to take more of the Eightpoints, or perhaps to acquire some varanite for his master to make an even deadlier minion of Death to face the other factions.

Archaon and Chaos are probably getting out of this deal the best so far, considering that now that Slaanesh is free they can turn their attention back to the destruction and dominion of the Mortal Realms. It is likely we will see more bold attacks against Sigmar, perhaps even in Azyr itself, as he reels from Morathi’s betrayal. It is likely that this new player in the game will only strengthen his already insurmountable forces, and he may succeed in driving the Bonereapers out of the Eightpoints and reclaiming it entirely for Chaos.

What do you think will happen next in the Mortal Realms