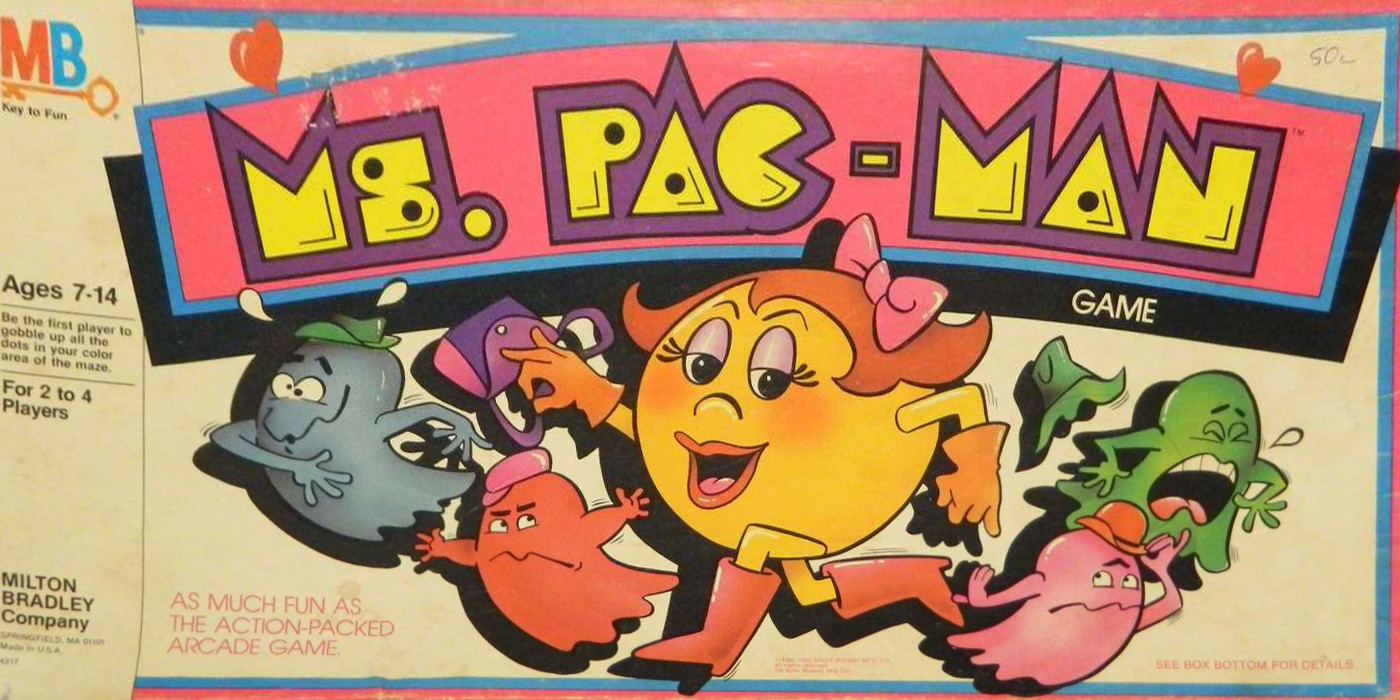 Some board games try to completely copy their source material, others totally ignore it, and Ms. Pac-Man somehow manages to do neither and both.

Having recently watched the Netflix docu-series, High Score, I’ve been on a real retro gaming kick recently. I’ve been escaping the horrors of reality through Mario, Sonic, and Link. That was partially what pushed me into finally spending far too much on a board game I will never play. Which finally got me looking into other board games based on retro video games, and subsequently begun pressuring myself to not spend AU$400 on a game I couldn’t even read, although I could always use the fan translation.

Which brings us to everyone’s favorite pizza shaped hero, or at least his wife, I guess? Well, but if they were married it would be Mrs. Pac-Man, but it’s Ms. Pac-Man. So, if she’s not his wife, is she his sister? Why am I the only one asking these important questions?!

Although we have covered the original Pac-Man board game from 1982, which stuck pretty close to the source material in terms of competing to gobble dots, the Ms. Pac-Man board game doesn’t quite follow the same formula, but it kinda does too. 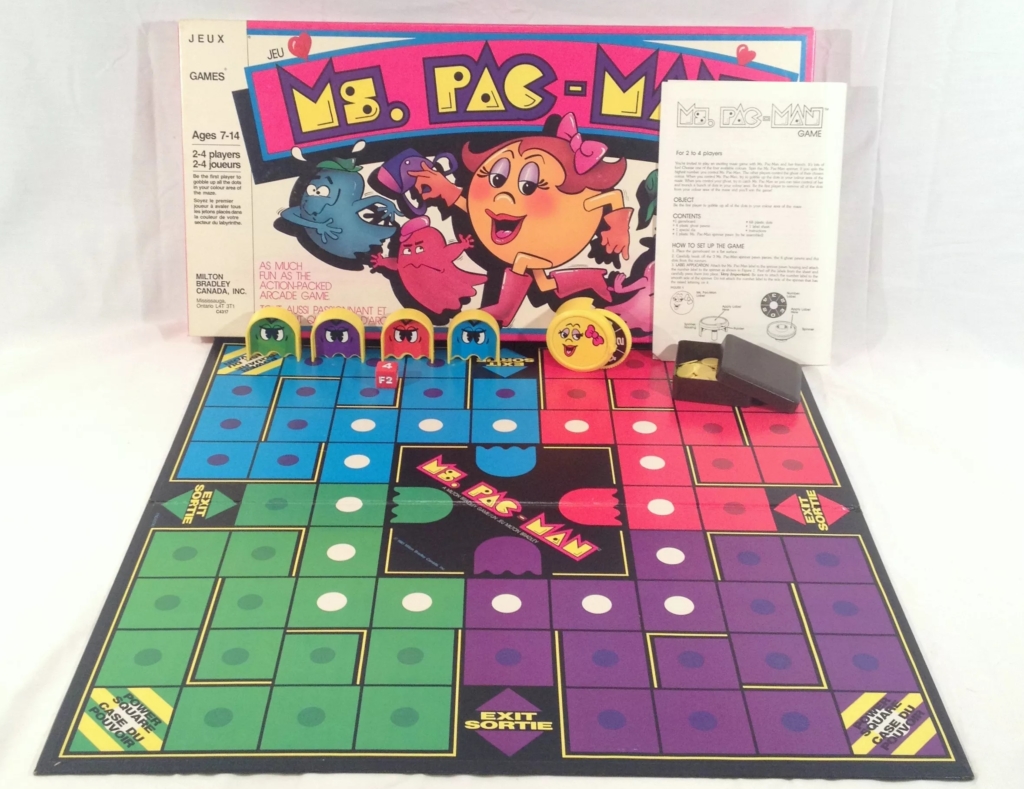 Like its counterpart, Ms. Pac-Man was also released in 1982 by Milton Bradley. Ms. Pac-Man is a kinda asymmetric competitive game with kinda set collecting and kinda route planning, but not really. You win by collecting all the dots in your region. Okay, sounds simple enough. So, everyone controls their own Ms. Pac-Man, right? Nope! There’s only the one Ms. Pac-Man and everyone is fighting over her. 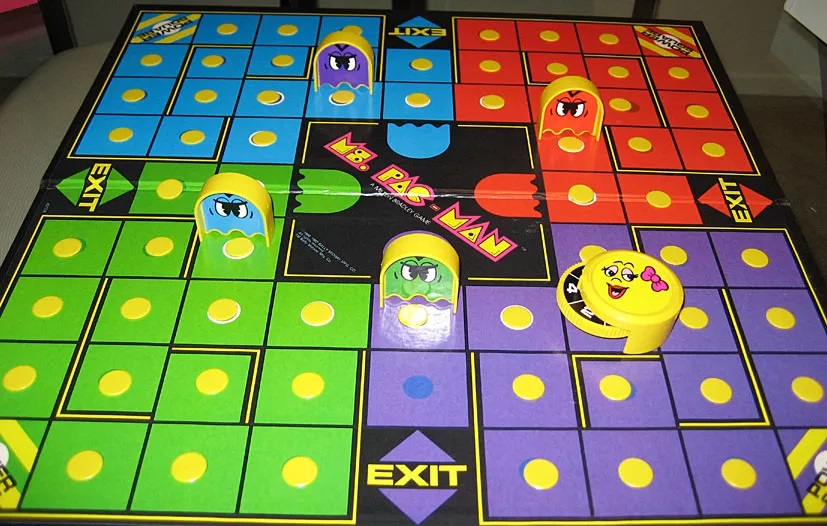 Each player technically controls one ghost. During setup, a pellet is placed on every spot of the board and the goal of each player is to have all of the pellets in their area of the board eaten by Ms. Pac-Man.

Each round, one player controls Ms. Pac-Man for several turns. It’s weird, I know. At the start of each player’s turn, they remove their ghost and place Ms. Pac-Man on any space in that innermost ring of spaces around the game logo. Then, they spin the Ms. Pac-Man spinner and move that many spaces, removing each dot once she has moved past it. The Ms. Pac-Man spinner has 0, 2, 2, 3, 3, and 4. 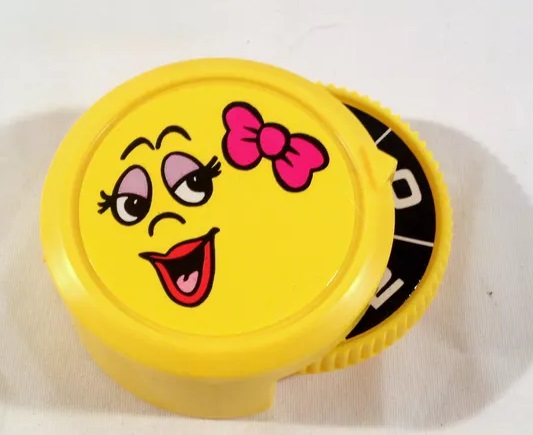 After Ms. Pac-Man moves, each ghost gets a turn to move by rolling the ghost die. If a ghost catches Ms. Pac-Man, that round is over and a new one begins, with the ghost player who caught Ms. Pac-Man now being in control of her. However, this is only true if the ghost is “strong”. Each ghost token is double-sided, showing their normal colored “strong” side and their greyed-out “weak” side. 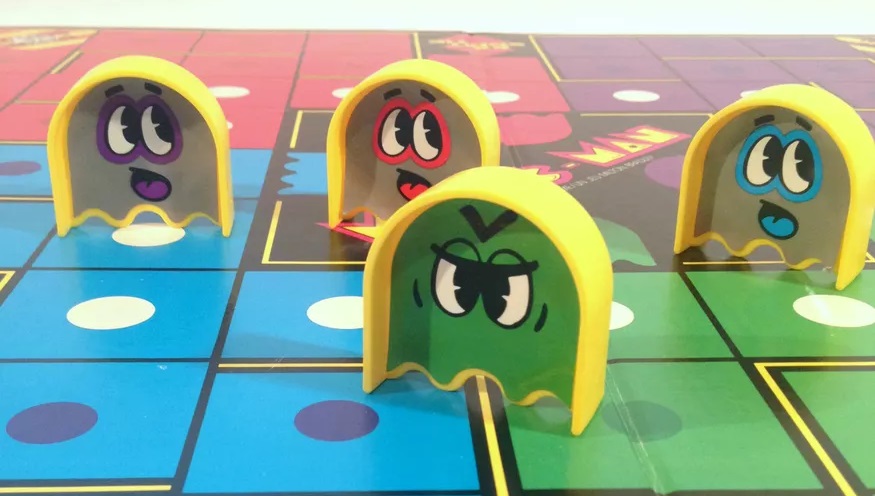 Ghosts flip over to their weak side anytime Ms. Pac-Man grabs the pellet in a Power Square, in each of the corner spaces. However, the ghost die I mentioned previously isn’t a normal die. 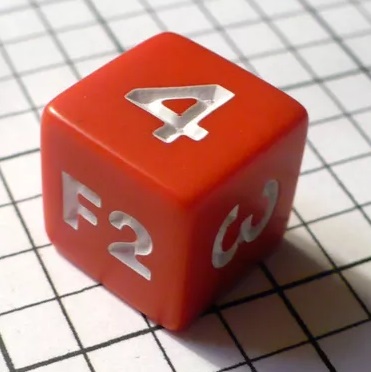 If a ghost rolls F2, they move 2 spaces but also flip over, regardless of their current state.

Once a player has completely cleared their section of the board of pellets, they win!

This game is so weird. It’s got the principles of Ms. Pac-Man, for sure. But also not really? Yeah, there’s eating pellets and being chased by ghosts and power pellets, but the competing to control Ms. Pac-Man and fighting to empty your section of the board is straight out of the Pac Man Kill Screen. 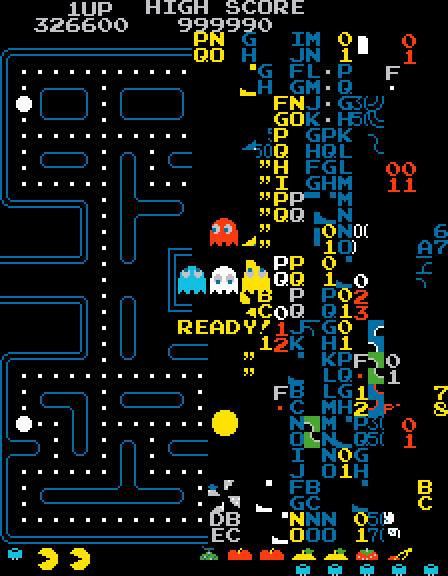