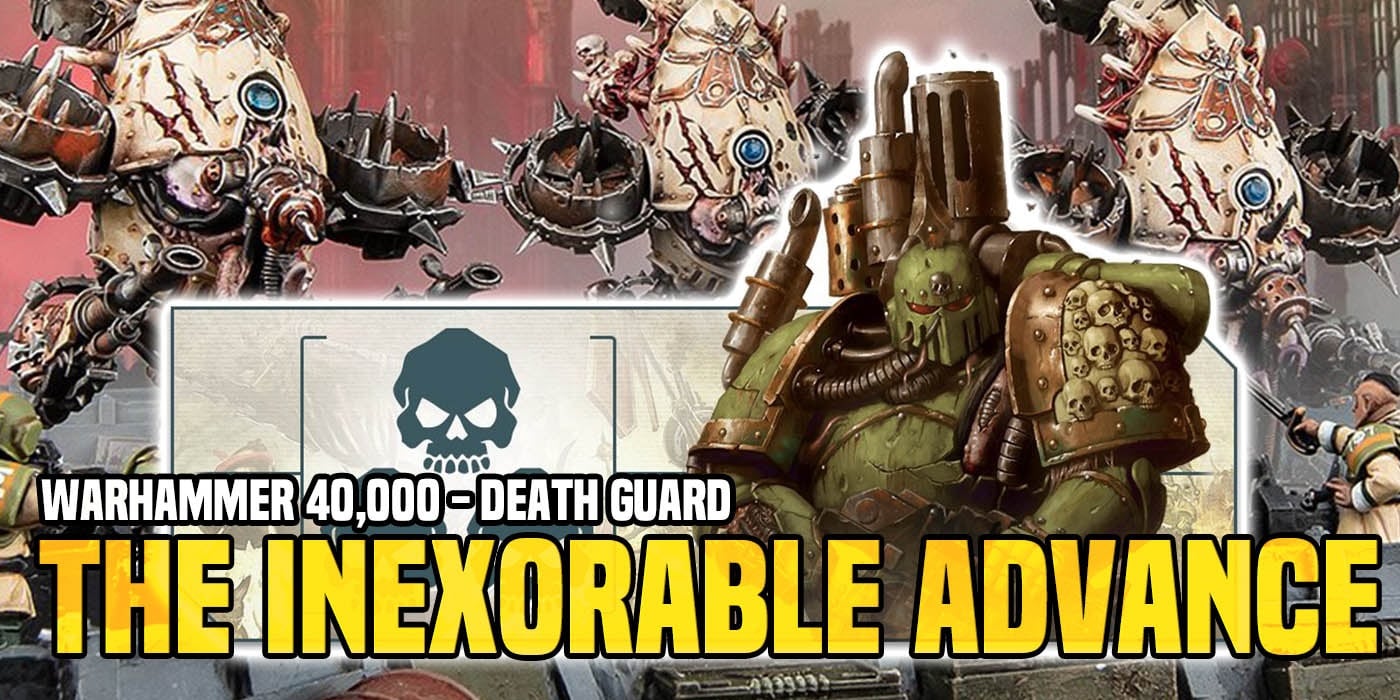 The Death Guard are getting highlighted this week by Games Workshop. Let’s take a look at some of their rules from their upcoming codex.

“Inexorable Advance is a Detachment ability, which means that it applies to units in Battle-forged Death Guard Detachments. One of the notable effects of this ability is that your Death Guard units will usually be able to move and fire their Heavy weapons without penalty, perfect for bombarding your foes, even as you advance on objectives.” 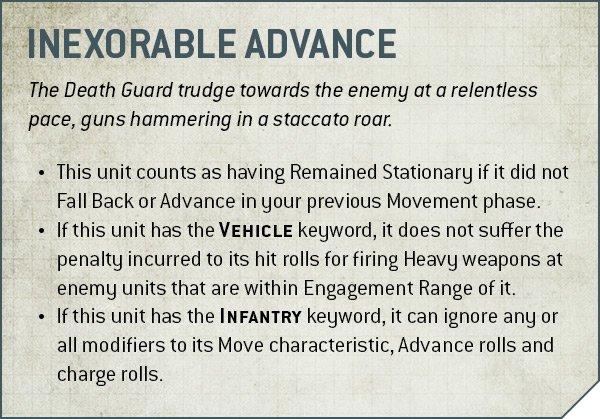 Note that the Inexorable Advance rule also has a nice boost for those Vehicles as well because it will allow them to fire to full effect at enemies that are within their Engagement Range. That’s a big deal for a lot of their vehicles! Imagine your Blight-haulers, Plagueburst Crawlers, and Bloat-Drones getting into combat and still pumping out a ton of damage in the shooting phase. Ugh… 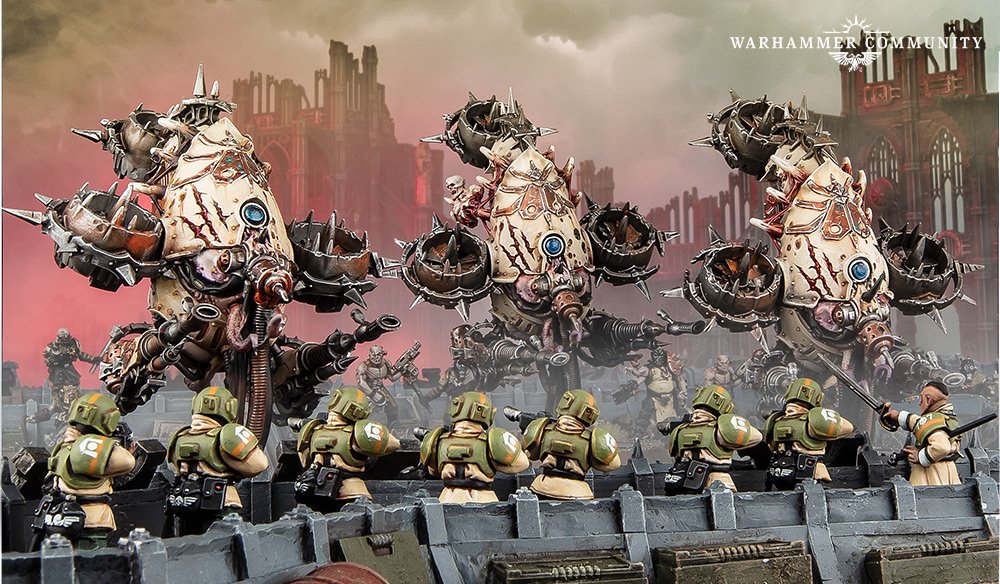 Rapid Fire Bolters also got a nice boost in the sense that the Death Guard are still trained Space Marines. Those bonuses didn’t go away: 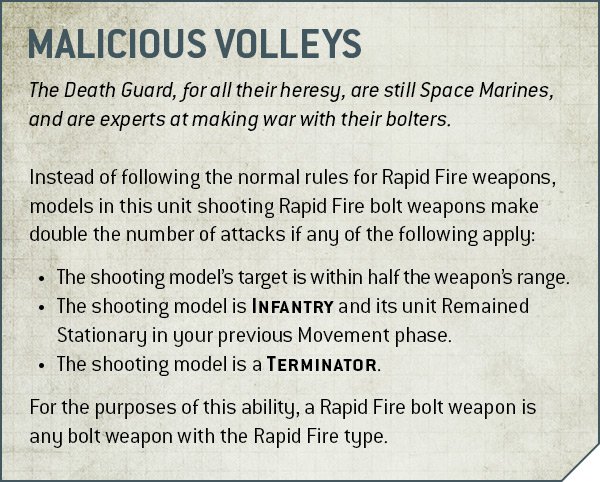 “It also works hand in hand with the Malicious Volleys ability to ensure that your Infantry can make the most of their Rapid Fire weapons, even while they’re on the move.”

While these previews aren’t exactly new things, it’s good to see them return in the new codex. Death Guard Infantry will be moving up to either gain a better fire position with double the shots, or sit back and let the enemy come to them – all while peppering them with bolter fire. Alternatively, you can really move those Infantry up as they will be ignoring any or all (meaning you keep the good ones and skip the bad ones) modifies to their Move Characteristic, Advance Rolls and Charge Rolls. 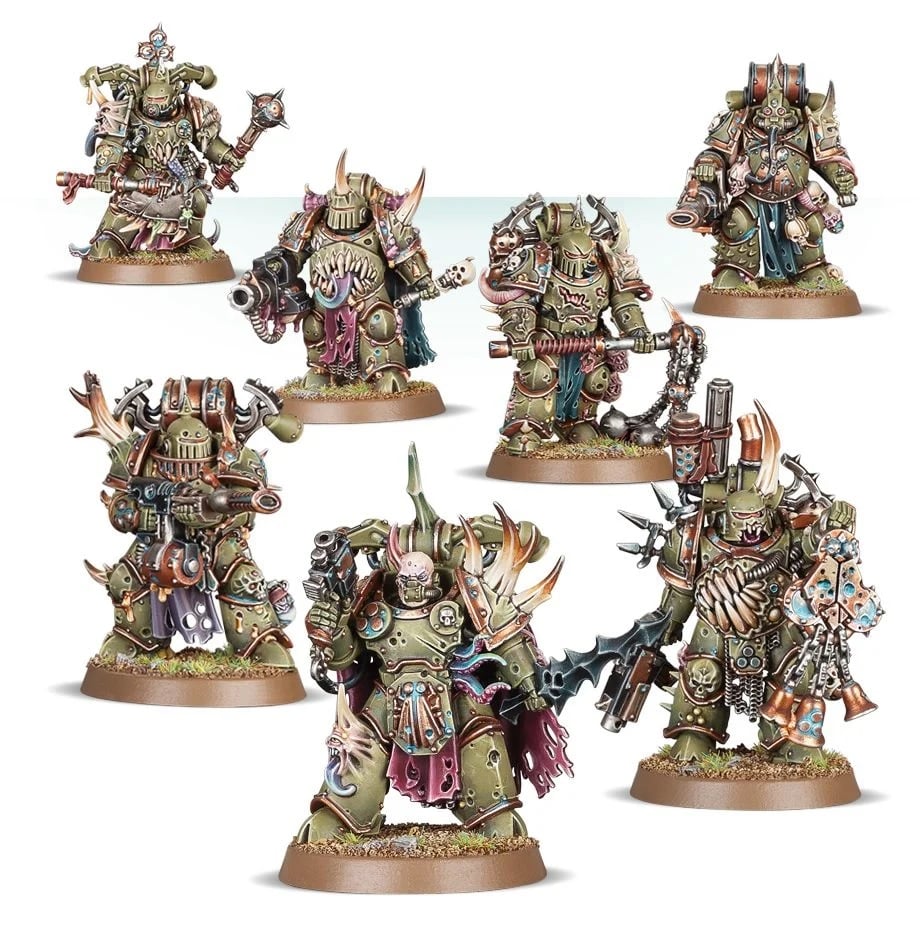 Plague Marines are going to be a mainstay in the army and they are sounding pretty solid! With these confirmed rules and also the updated statline for them, I think the Death Guard are going to be in a good position moving forward.

Now, we still need to get a look at their point values as that could change things around quite a bit. However, barring any massive upticks in points, the Plague Marines and the rest of the Death Guard are going to become one of the toughest armies to take out. The increased toughness, extra wound, Disgusting Resilience, and all their OTHER dirty tricks (we haven’t seen what the final rules for Plague Weapons will be), the Death Guard are looking to carve up a nice niche for themselves in the 40k meta. Oh and Don’t forget Mortarion’s new groove either: 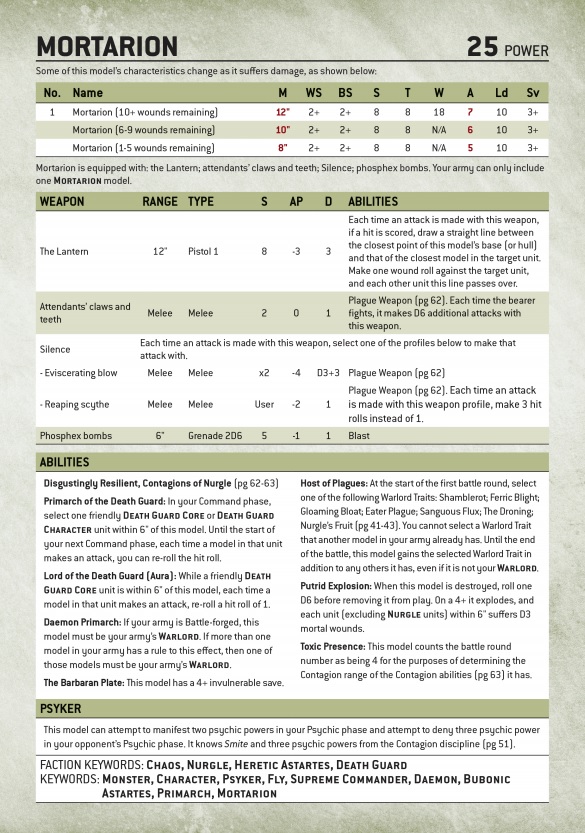 All of these things are just the previews we’ve seen from GW so far. They are intending to show off even more the of the Death Guard codex this week. I’m looking forward to see what else they will have up their puss-filled sleeves.

Will the Death Guard become the “tough” Chaos Marines or will they just be a slightly different flavor of CSM?

Author: Adam Harrison
Writer, Editor, Texas Native, and Austinite for 15+ years, Adam covers all things Tabletop Gaming. Which includes Warhammer 40,000, Age of Sigmar, D&D, Board Games and everything else that involves dice, boards, cards and a table. A hobbyist, player, and collector of miniatures and games, Adam's current obsession are his Death Armies for Age of Sigmar, his Blood Angels and Tyranids for 40k, and his ever growing Arkham Horror: The Card Game Collection.
Advertisement
Death Guard Games Workshop Miniatures Rules Space Marines Warhammer 40k Warhammer 40K 9th Edition
Advertisement 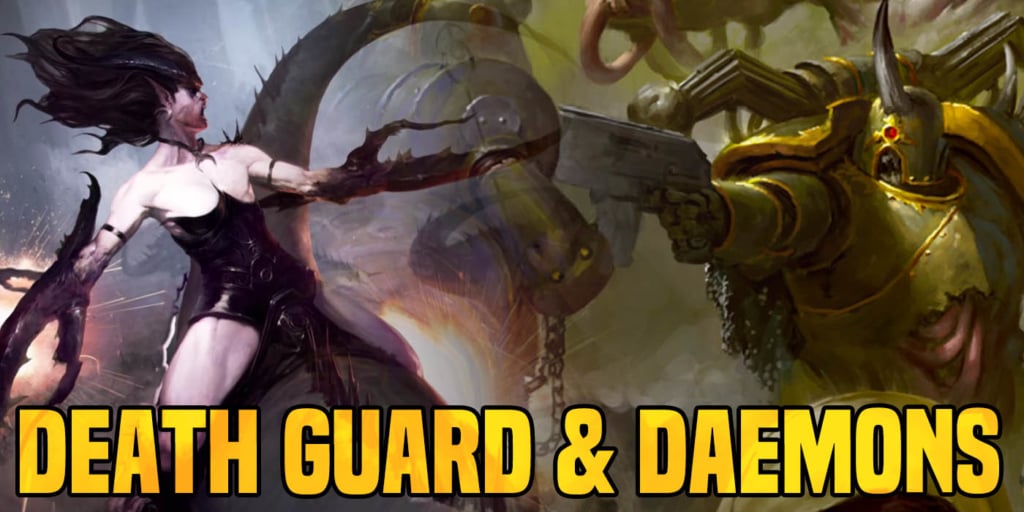