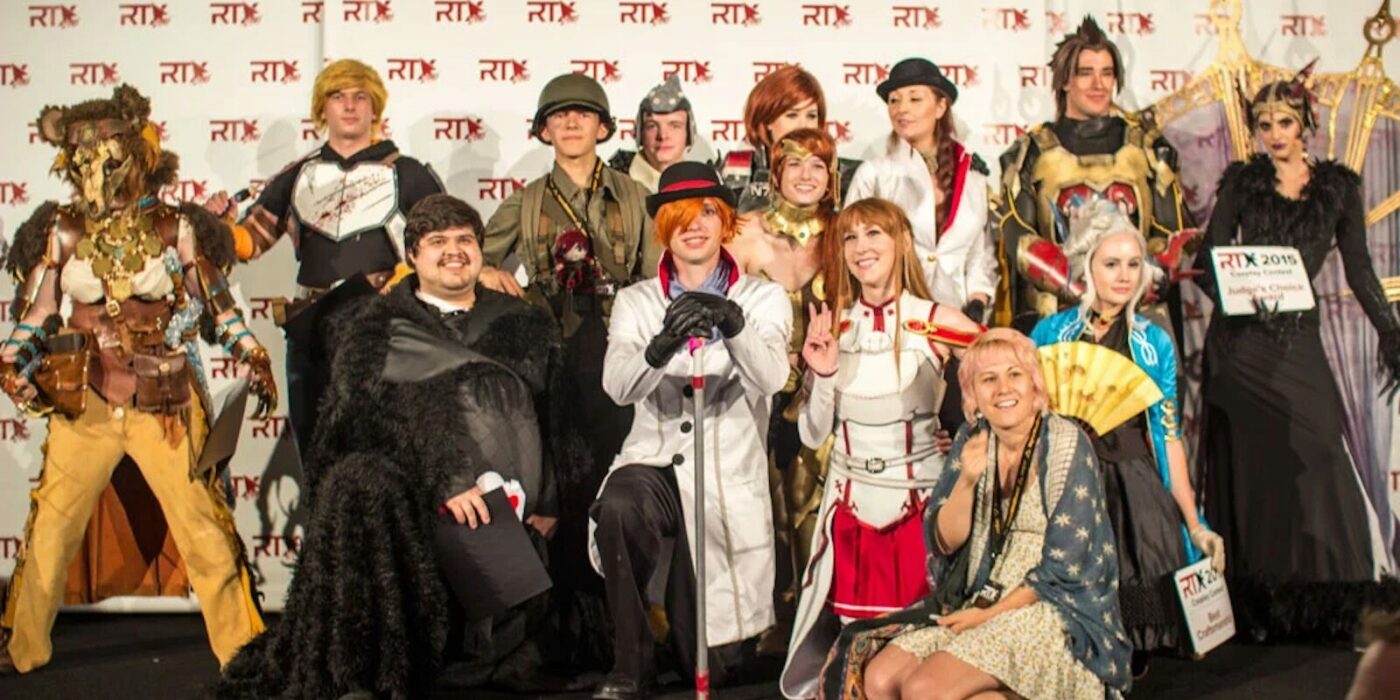 Cosplayers are fighting to find their place among appreciated artists everywhere. Why is there such beef about cosplayers monetizing their content? Let’s dive into cosplay and coin!

Art has been a central focus of society for longer than language has existed. The visual representation of feelings and emotions evokes a sense of connection for the viewer, so it is no surprise that new mediums for artistic expression are always evolving. In the last century, the art of cosplay was born, and the resulting cultural movement is powerful. As artists in the cosplay medium reach professional levels of expertise they have naturally begun monetizing their contributions. From paid partnerships with major videogame and pop culture brands to paid appearances at conventions, cosplayers are coming to the table to make a living off of their amazing art. This week let’s talk about cosplay and coin- the story behind cosplayers getting paid.

The glorious internet god, Wikipedia, has a fantastic answer. “Art is a diverse range of human activities in creating visual, auditory or performing artifacts (artworks), expressing the author’s imaginative or technical skill, intended to be appreciated for their beauty or emotional power.” A simple enough definition, able to encompass a multitude of mediums, genres, and inspirations. Cosplay is one of the most popular forms of art in the pop-culture world. It is experiencing exponential growth and relevance in today’s society. Despite this rapid growth, cosplayers are still considered the step-children of the artist world, and their pocketbooks suffer from it. There is a lot of fuss about what people should charge for in cosplay.

Cosplayers like CutiepieSensei are having active conversations with their audiences about expectations. There is a lot of judgment and censure hanging around the cosplay community these days. There’s a lot of gatekeeping about what’s art, what’s allowed, and what people should make money off of.

Do y’all care if a cosplayer wears store bought costumes? Not tryna start something, I want to ask this question honestly. If y’all don’t know, the running theme here is that I make prolly 90% of my costumes. But the landscape of social media has changed into a place where ppl have started pumping out content at a stupid rapid pace because attention spans are getting shorter (science legitimately says that the avg attention span of anyone in Gen Z is 8 seconds). Seems like a lot of ppl just subconsciously want “new” feeling stuff all the time now. As a cosplay maker, it can be incredibly hard to keep up. I know some ppl complain about reposts or the same costume but……if it took me over a month to make….y’all gon see it more than once lol.

Art isn’t Blind, nor is it Stagnant

With each generation, we find new mediums of expression and new ways to bring our creative dreams to reality. With the invention of video games, the popularity of cartoons, anime, and other forms of multimedia projects, art is so much more accessible and consumable than it has been in previous centuries. Art is delivered to our homes, our phones, and computers daily. We sometimes fail to stop and appreciate the quality and skill behind what we are consuming. We see cosplayers everywhere, we ask to take pictures with them, we ogle their efforts… But we rarely, if ever, stop to think about the high cost of their art.

Cosplay Comes to the Table

Cosplay has swept the convention circuits. It is appealing to anybody who has played a video game, watched an anime, or fallen in love with a character. Cosplayers are taking costuming, construction, and invention to new levels. Some are fortunate enough to make their living in this field. Cosplay is similar to the worlds of acting and modeling, combining both creative elements and performative ones. Not only are they looking the part, but they are also embodying the spirit of the characters they portray. This is an intense, interactive, and emotionally draining field to break into. Those cosplayers who make a living from this field do so at their own expense. Countless hours, blood, sweat, and tears poured from their hearts into their crafts.

Over my years of making a living as an independent model in artist-driven town Austin, I learned to appreciate cosplay. The level of skill and tact it takes to work in cosplay is astounding. I constantly saw artists with skills I don’t think I will ever possess. Whose creations look so much like their namesakes that it catches my breath. The most surprising and disheartening moments came from intimate conversations. We realize this wonderful community is constantly belittled, discredited, and pushed aside when it comes to their efforts. A decent cosplay can take hundreds or thousands of dollars and hours to create. To be told that they won’t be paid for all of their hard work, and only “given exposure…” That hurts. Every. Time.

I had the honor of being tapped to coordinate the cosplay competition elements for an anime convention here in Texas. While I had coordinated Gaming conventions before, this was my first foray into Anime. I learned, quickly, that there is MUCH more respect in the anime world for cosplayers, voice actors, and artists. I am used to pulling teeth to get expenses covered for guest cosplayers. At this convention, all their expenses were covered and they were paid money for their time as well. THIS WAS GROUNDBREAKING. I saw real appreciation for the hard work and effort these artists put in. Their audiences would fully enjoy having them at the convention. I was incredibly grateful to have the opportunity to see this community grow.

You Can Make a Difference

The next time you go to a convention, stop by a cosplayer’s booth. Look through all of their gorgeous prints, and stare in wonder at their cosplay props and costume construction. Take a peek at their Patreon pages, or buy their construction books. Most of all, clap loudly during cosplay competitions. Let them feel your love and appreciation. Let them know you care. Ask your local conventions to bring in the cosplayers you want to see. They listen to requests. Find some way to give back to this amazing community of artists. Support them, because they care just as much about your fandoms as you do. Help us keep this starving artist community alive!

Author: Jennifer Larsen
Jennifer aka "Mayhem's Muse" is the Cosplay Editor for BoLS and manages Ad Sales and Communications. Her cosplay awards include the RTX Judge's Choice Award and Dragon's Lair Austin's Cosplay Symposium. Jennifer has been a Cosplay Guest Judge at RTX, Tacticon and Genghis Con in Colorado. She regularly attends conventions to cover cosplay for BoLS. Her cosplay work has been featured in publications such as Girls Who Love Monsters, Geek Fuel, and Renaissance Magazine. Jennifer has modeled in the Her Universe Fashion Show, Precision Camera's yearly Precision Camera University, and has taught several workshops for photographers about partnering with cosplayers and creative muses/models. Jennifer is a lifelong enthusiast of retro video games and loves Dungeons & Dragons, urban fantasy, tabletop games, VR technology, and historical archery. She has set National Records through USA Archery’s Traditional Division for Asiatic Bows and earned 4th Place in the World Nomad Games in Kyrgyzstan in 2018 for Women’s Korean Archery. Jennifer is currently studying for her Masters's Degree in Organizational Leadership.
Advertisement
Comics Cosplay Cosplay Guide DC Pop Culture
Advertisement

The Many Personalities of Moon Knight Cosplay 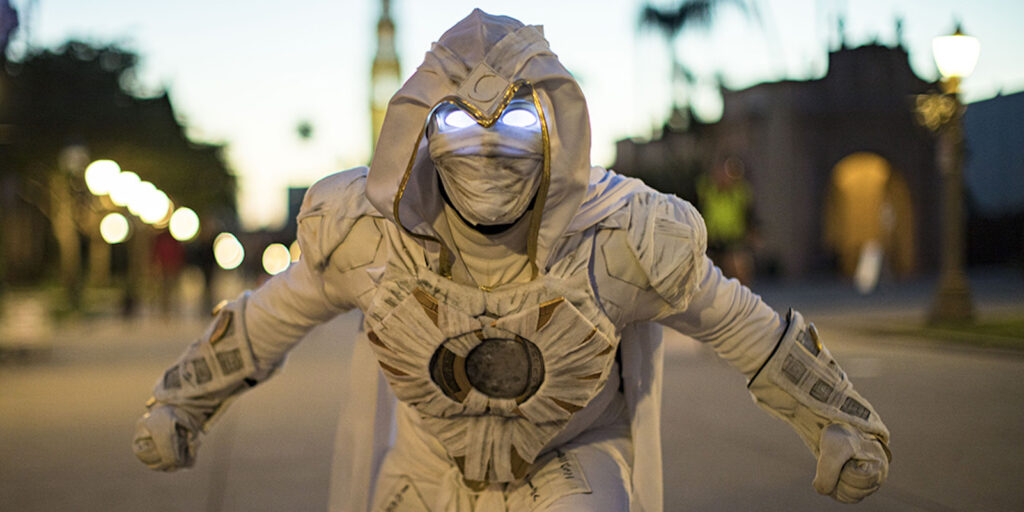