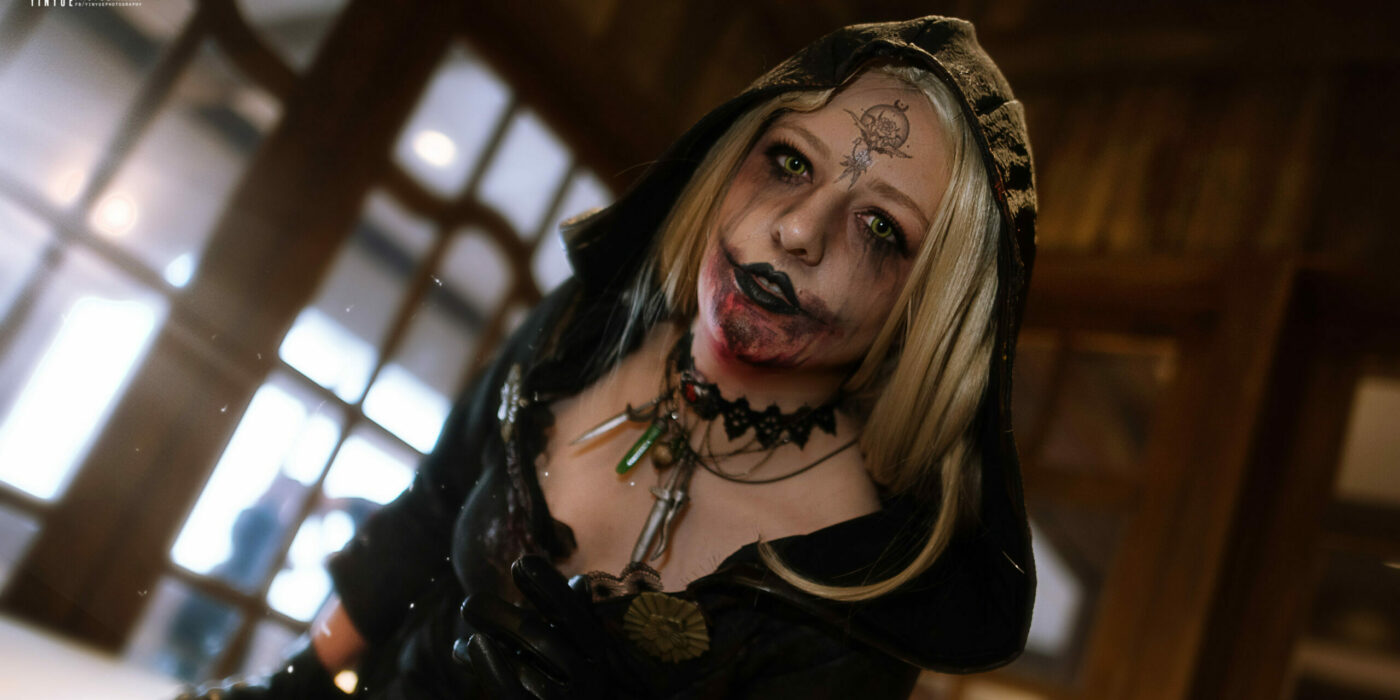 Cosplayer Lutavia is here with words of wisdom for future cosplayers – served with a side of spooky Bela Dimitrescu cosplay!

We’ve been covering the cosplays from Houston’s Comicpalooza for years, and this year we’re back again. The show always comes hard for cosplay, with a wide range of genres and fandoms represented. Their cosplay competition is fierce, and this year we’ve had a chance to interview some of the judges and competition winners. Today we’re sitting down with Lutavia cosplay!

Hi, I’m Lu, a Texan nonbinary cosplayer who not only makes but educates! My cosplay career has spanned from small scale workshops of less than 20 to presentations for over 100. I’ve curated and crafted photoshoots for custom products and taught cosplayers around the world how to use cool tools to make their crafting that much easier. And I’ve made a huge variety of projects ranging from weathered, complex armor to beautiful draping fabrics. If you need a cosplayer for your event that does a little of everything, check out my press kit!

I started cosplaying after college, but I was very inspired lurking on the internet as a preteen and discovering cosplay.com. I went to my first convention when I was around 13, and I instantly fell in love with costumes —but I really wanted to learn how to make my own. I’ve only been making my own stuff for around six years now (many of my friends have been doing it much longer, think 10-15+), but the constant challenge and innovative ways to incorporate new techniques keeps me going.

What are your favorite completed cosplays, or your most popular?

I think my favorite completed cosplay is my most recent one, a male Viera from Final Fantasy XIV. That one has been quite popular due to some of the techniques I’ve used and being a bit rarer. But my Shieldmaiden Brigitte cosplay, from Overwatch, is by and far my most popular.

I mainly have guested in the Texas circuit (Comicpalooza, Oni-Con, Delta H, Anime Frontier), but I’ve paneled at other cons including Fan Expo Dallas and PAX South and PAX West. I panel a LOT — cosplay education is the most important thing to me, so it’s what I try to do at every con I visit!

What criteria do you use to judge cosplay competitions?

So, first, I strictly use whatever the judging criteria is from the convention — each con judges costumes in different ways. But in my personal judgements and how I add points to scores, I look for cleanliness of the work, logical and thoughtful decision-making (from material choices to assembly), and someone’s personal take on the costume and why it stands out. I also strongly appreciate new technique exploration, but it will never weigh heavier than clean work!

What is most important to consider as a judge?

As a judge, I need to consider every small part of the costume, but I also need to see the overall picture: what story is the cosplayer trying to tell, and are they telling it effectively? I think as a judge, you need to be thoughtful in that regard.

What advice do you have for cosplay judges?

I really think as a judge, you absolutely have to be well-rounded. Maybe you haven’t personally made a ballgown, but follow people who do; ditto for sewists following armor makers. Expose yourself to a wide range of mediums and techniques and familiarize yourself with as much as you can, because you never know what someone will bring to the judging room.

If you are the only person in the room to understand how difficult 3D modeling organic shapes is, for example, or who understands the labor involved in making several petticoats — even if you haven’t done it, you will be able to judge someone with those things, and sometimes, you’ll be the only judge who actually KNOWS those things, and you can educate your fellow judges. You could literally be the difference between work going unnoticed and a top prize for someone.

What category/division do you most enjoy judging?

I actually LOVE judging Novices/Beginner. It is by and far my favorite category because you never know what they’ll bring to the table. I have been utterly floored, and I feel like every year, the bar gets even higher for people’s “first costume”.

What has been the most exciting cosplay you have seen/judged in competition?

Oooh, this is really difficult, actually — I feel like every con has some costumes I think about. But I tend to think about my judge’s choice awards I give out the most, actually! My first one was a Shugo Chara group, all preteens, who made props out of Amazon boxes and plastic bottles and it looked like foam, since they didn’t have any money — that was so impressive.

The second one was a Sakura (from Naruto) who did historically-inspired samurai armor and wove her own shoes! Most recently it was actually a Mipha from Legend of Zelda, who had all these beautiful, story-appropriate details that weren’t in the original design — very thoughtful. I think it’s always the people who are a little unorthodox, creative, or who really think about what their character’s garments tell a story about, visually, that stick out to me.

I’m actually really into video games, comics, anime, and manga. Some of my favorite stuff is darker media — Berserk, Monster, etc. — but I really love JRPGs like Final Fantasy and tactics games, like Tactics Ogre. I think if the characters are strong, I’m naturally pretty inclined to get into it! Some of my favorite characters are definitely the ones I cosplay, haha — I did Asuka from Neon Genesis Evangelion for example, as well as Dimitri from Fire Emblem: Three Houses.

I super love video games — RPGs, JRPGs, action/adventure type stuff — but I also played a lot of board games and still do sometimes. Tabletop also holds a dear place in my heart, especially TTRPGs — I’ve played Dungeons & Dragons since 3.5e, and I’ve also played Shadowrun, Pathfinder, and some indie games like Monsterhearts.

Wow, this is a tough one! So, my own close friends are my inspirations, honestly, but I have a few I look up to, all I’m so fortunate to know — Cowbutt Crunchies is a big one, their work has influenced mine in so, so many ways — but I also really love BambiLashes, DecemberWynn, Sarcasm-Hime, Spookystitches, all from a craftsmanship-inspired perspective. Their costumes are very “lush” and influence my choices a lot, I think!

But I think from like, an education standpoint, people like Kinpatsu Cosplay, LightningCosplay, and Pretzl Cosplay inspire me even more, as they also focus a lot on cosplay education, which I’m extremely passionate about!

I really just recommend you don’t ask the question, “who should I cosplay? Who do I look like?” Because that doesn’t matter! I’m a 5’3” blob who cosplays giant, emo 6’2” men — don’t let that stop you at all! Cosplay what you feel comfortable learning how to make (or buy!), based on your lifestyle, timeline, and budget. I think that’s the most important thing I learned: there will be other cons, so take your time, be purposeful in what costumes you pick, and relax and be kind to yourself!

To me, this hobby has been a huge part of my life in friendships, personal growth, discovering who I am, even really awesome work opportunities, so I really encourage you to give it a shot and cosplay your way, no matter what it is! Buy, make, alter and be proud of it — wear something and go have some fun, since cosplay literally means “costume play”, and that’s what it’s about!

Author: Jennifer Larsen
Jennifer aka "Mayhem's Muse" is the Cosplay Editor for BoLS and manages Ad Sales and Communications. Her cosplay awards include the RTX Judge's Choice Award and Dragon's Lair Austin's Cosplay Symposium. Jennifer has been a Cosplay Guest Judge at RTX, Tacticon and Genghis Con in Colorado. She regularly attends conventions to cover cosplay for BoLS. Her cosplay work has been featured in publications such as Girls Who Love Monsters, Geek Fuel, and Renaissance Magazine. Jennifer has modeled in the Her Universe Fashion Show, Precision Camera's yearly Precision Camera University, and has taught several workshops for photographers about partnering with cosplayers and creative muses/models. Jennifer is a lifelong enthusiast of retro video games and loves Dungeons & Dragons, urban fantasy, tabletop games, VR technology, and historical archery. She has set National Records through USA Archery’s Traditional Division for Asiatic Bows and earned 4th Place in the World Nomad Games in Kyrgyzstan in 2018 for Women’s Korean Archery. Jennifer is currently studying for her Masters's Degree in Organizational Leadership.
Advertisement
Action Adventure Anime Cosplay Movies and TV Pop Culture Studio Ghibli Video Game RPG Video Games
Advertisement 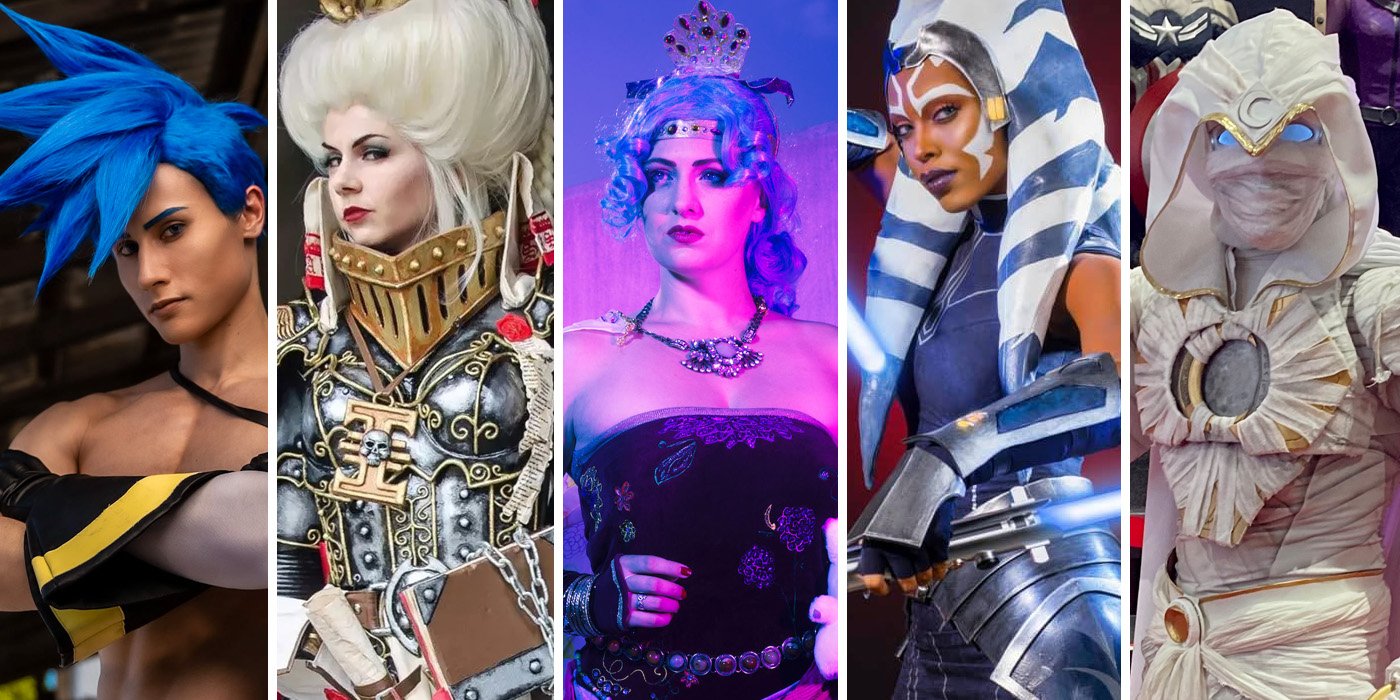