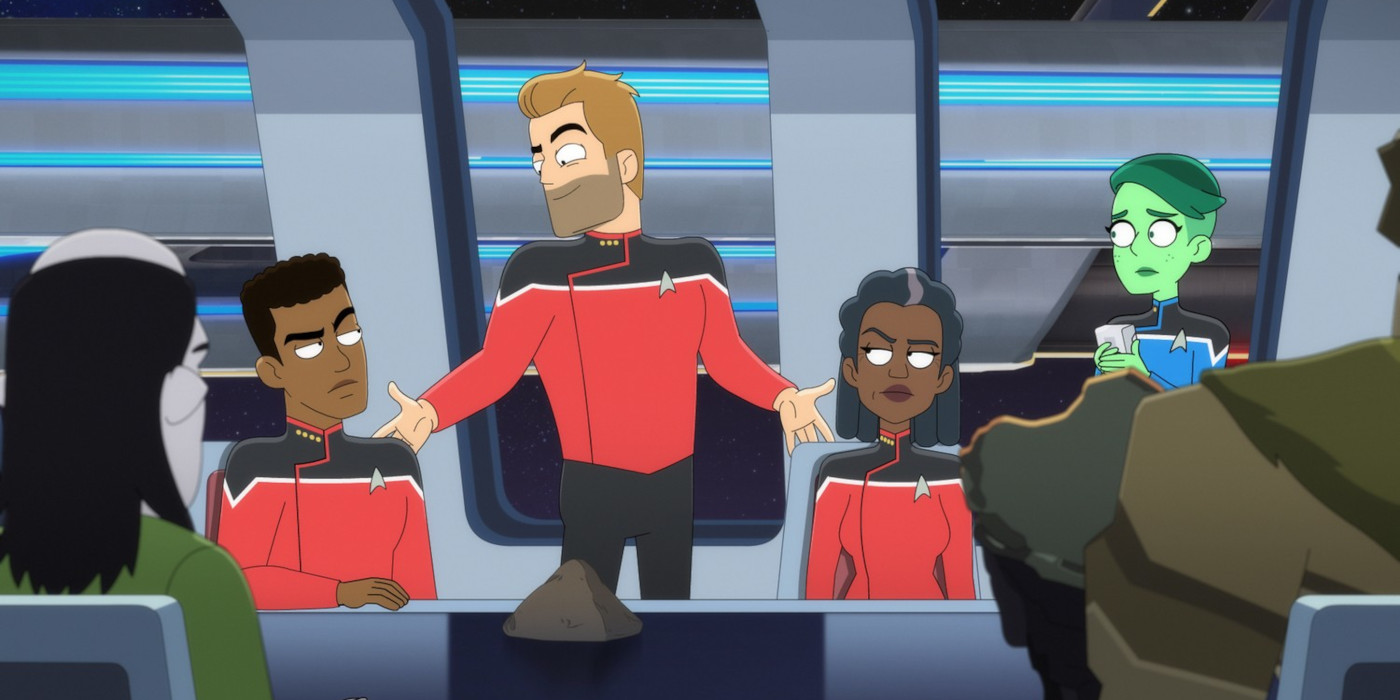 Star Trek: Lower Decks loves a trope. And one of the tropiest Star Trek tropes of them all is “science expedition goes awry”.

A Federation science officer on Jengus IV encounters a glowing, green orb. The orb sees into the officer’s dreams and conjures up an image of his 7th-grade Geology teacher in a toga. But when the two touch, the scientist turns to stone.

After the USS Hood makes peace with the planet’s inhabitants, the Scrubble, the Cerritos, and fellow California class ship the Carlsbad are sent to clean up the mess. “Mining the Minds Mines” is split into two plots – one with most of the Lower Deckers on the planet below cleaning up the orbs and the other with Captain Freeman and Captain Mayer of the Carlsbad brokering peace between the scientists and the Scrubble. 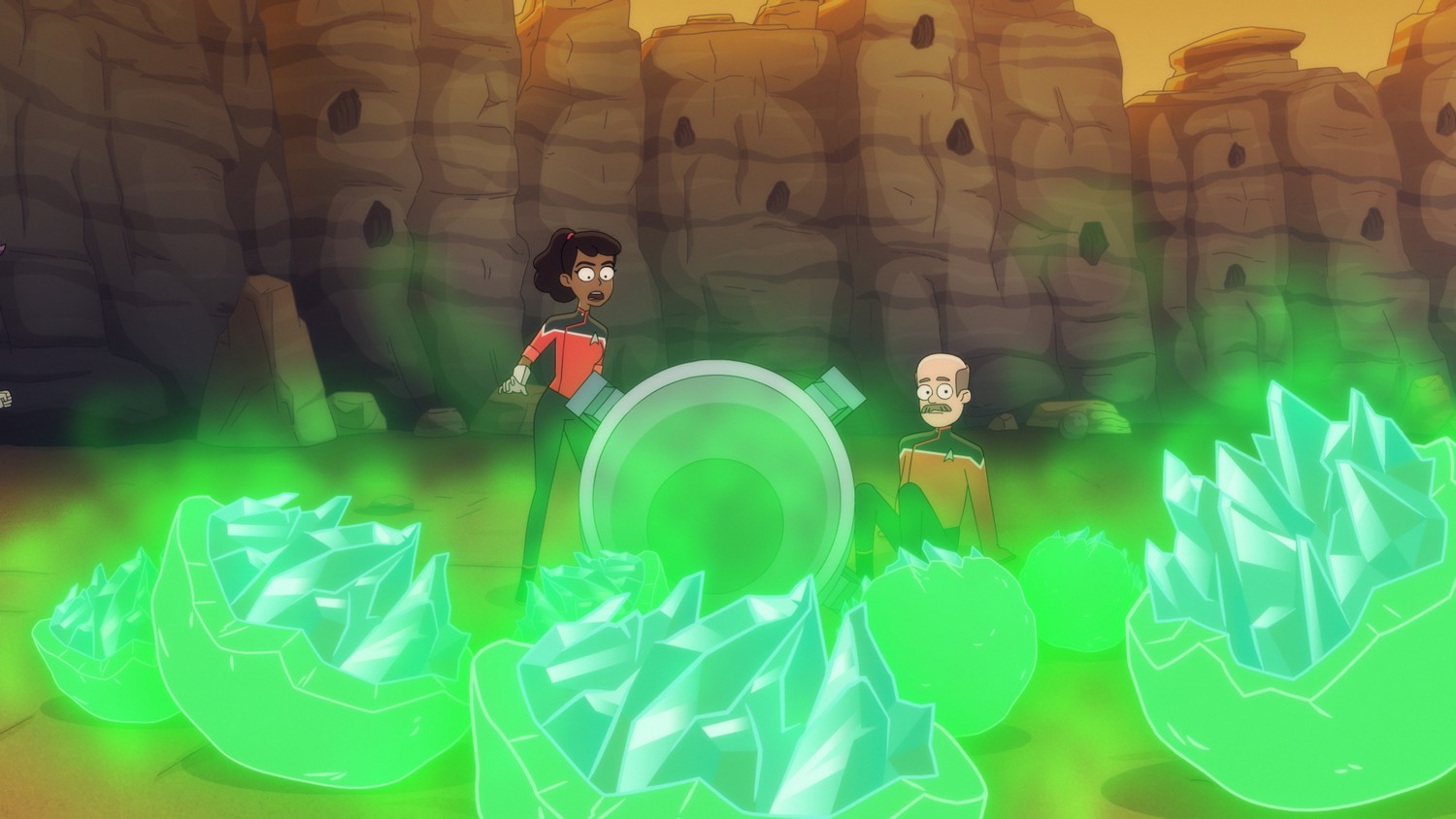 Mariner, Boimler, and Rutherford head down to Jengus IV to take care of those pesky green orbs. But upon their arrival, they discover that their Carlsbad counterparts seem extremely nonplussed about working with the Cerritos crew. In fact, the Carlsbad team suggests that the Cerritos has a reputation for flouting the rules and goofing off.

To counteract those claims, Mariner insists the team dispose of the orbs as quickly as possible. And while that goes well at first, it isn’t long before someone gets sloppy and the orbs wind up cracked on the floor. The broken orbs cause everyone’s nightmares to become a reality which includes everything from giant Borg snakes to Klingon clowns.

Both the Carlsbad and Cerritos teams retreat into a nearby cave. There the Carlsbad crew admits they are jealous of the Cerritos for excelling at all the coolest missions. Becoming an actual, unified team, the Lower Deck crew notices that their nightmares made flesh are more than nightmares – they are seemingly every thought any of them has ever had.

And as they venture further into the cave, they discover a giant door. Behind the door are tons more green orbs as well as a central computer gathering data. Strangely, a lot of the technology in the cave appears to be Federation in origin. 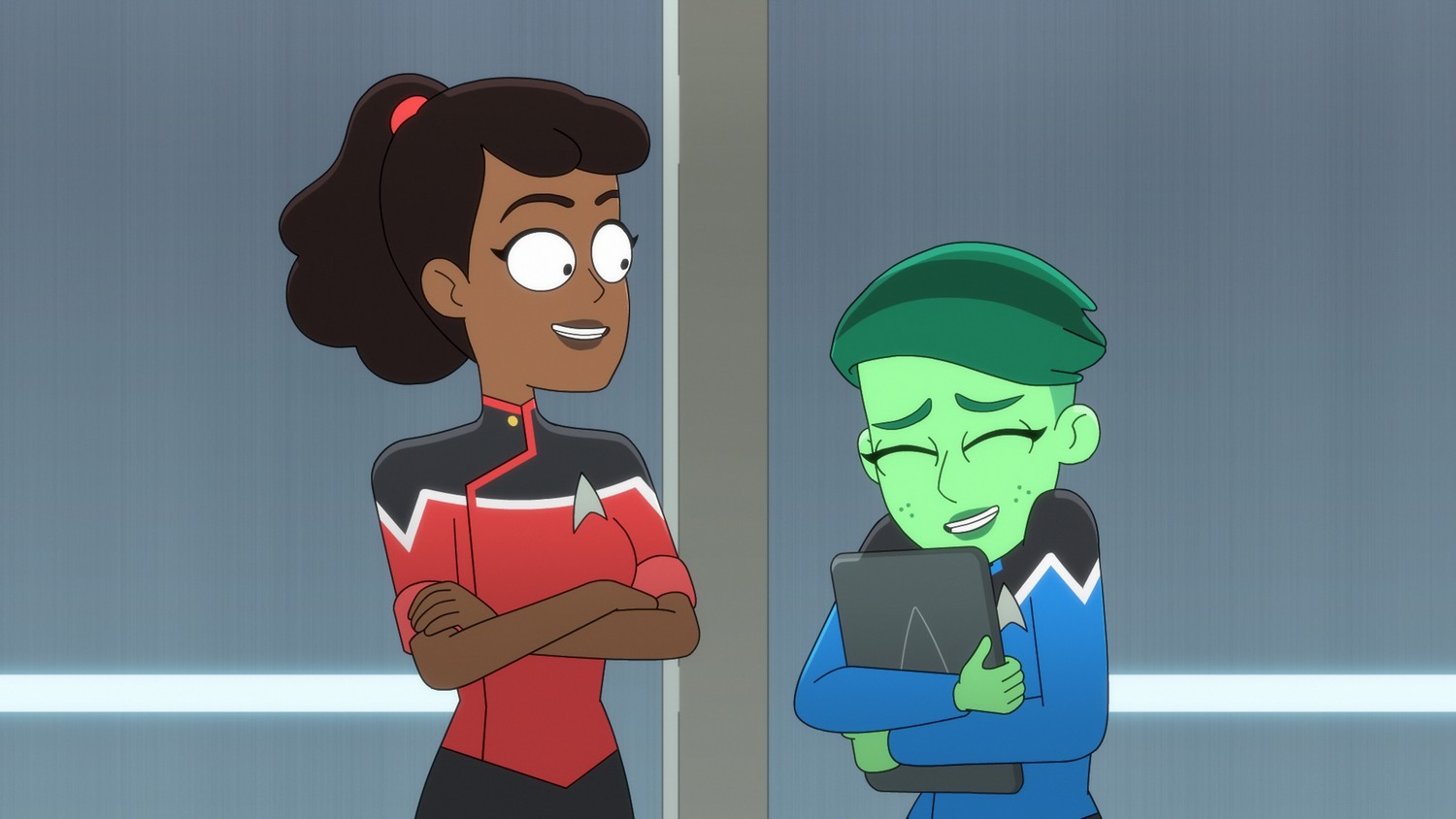 Tendy is starting her senior science officer training program. That would be cool if it weren’t for her mentor, Dr. Migleemo the therapist, who is equal parts bird person and absolute moron. But he has an important assignment for Tendy: work alongside Captain Freeman as she sorts through peace talks between the scientists and the Scrubble.

Things go off the rails on that front almost immediately as Freeman and Captain Mayer (who is much younger than Freeman) argue over who should take the rock gift offered by the Scrubble. Tendy tries to tell them that there are strange readings coming off the rock but she is ignored. Afterward, Tendy gets a pep talk from her actual mentor Dr. T’ana.

By the time Mariner, Boimler, and Rutherford return to the Cerritos, it looks like war is about to break out in the conference room. That’s when Tendy breaks the rock gift revealing a spy device inside. It turns out the Scrubble and the scientists are working together to steal and sell sensitive Starfleet intel. Freeman and Mayer instantly team up to take down the scientists, the Scrubble, and their very foolish plan. 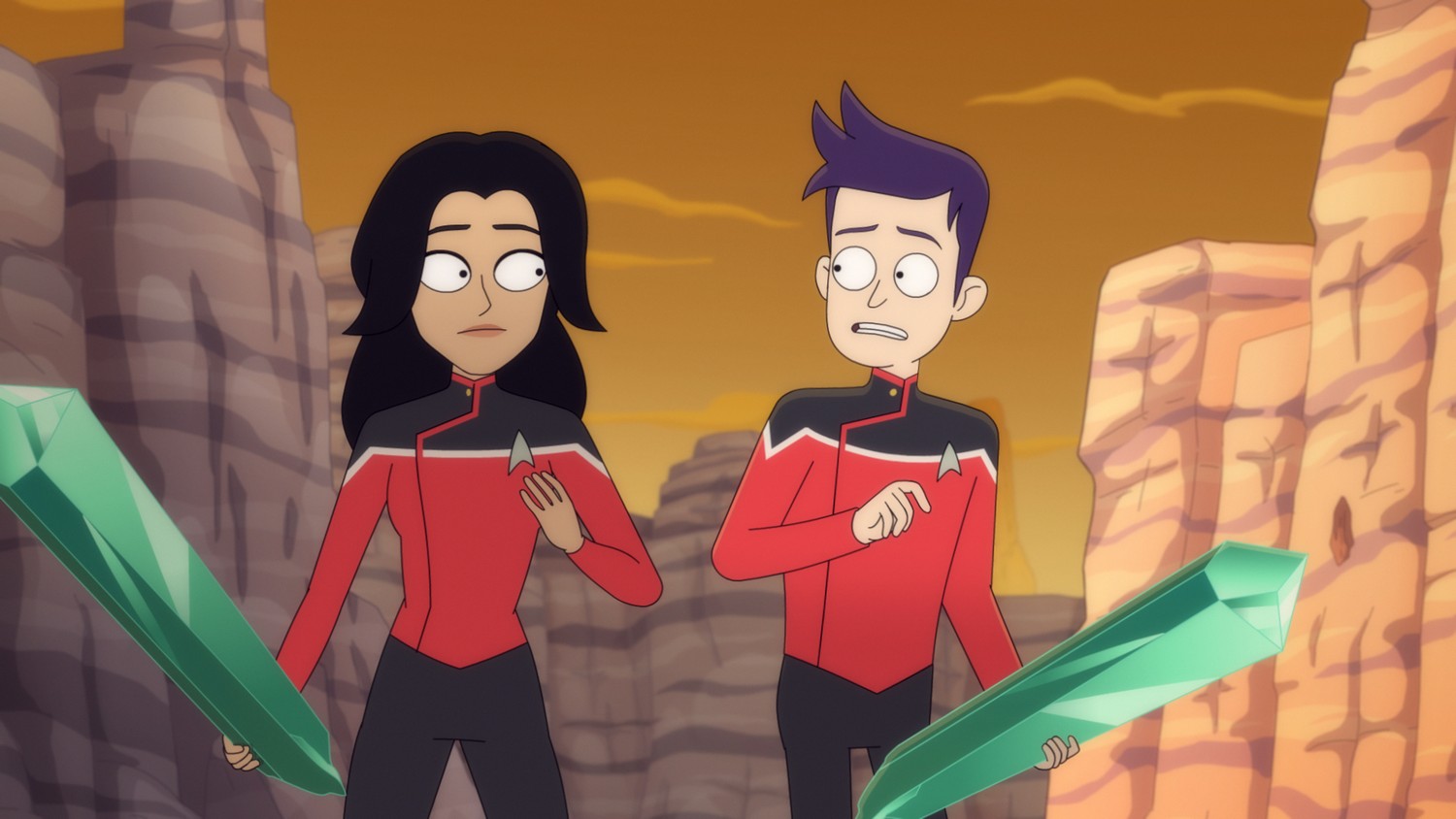 “Mining the Mind’s Mines” is a great episode of Lower Decks. Not only does it have loads of great Trek Easter eggs (more on those in a bit), but it really revels in the show’s own character continuity. It makes sense that the crew of the Carlsbad is jealous of the Cerritos – they are pretty darn cool. And they’ve all seen and done a lot!

Boimler imagines an admiral asking him for help fighting the Borg because Boimler is good at fighting the Borg (in the holodeck). Mariner doesn’t trust people so it makes sense that she has anxiety about her relationship with Jennifer. Tendy struggles to be assertive, but she gets over it here to save the day. Even Ransom’s clowning on scientists jives with his overall jock attitude. There’s even another reference to that weird space koala that people see when they are about to die/ascend.

Lower Decks is a cartoon and so it is okay that its heroes are cartoonish sometimes. But “Mining the Mind’s Mines” shows us how much the Lower Deckers have grown in three seasons. And the way we watch them grow is funny. Boimler flipping out over evil raisins playing the trombone is hilariously on brand. Mariner imagining Jennifer in a bikini at the worst time checks out. Rutherford having a crush on Leaha Brahms makes sense. And speaking of that last one… 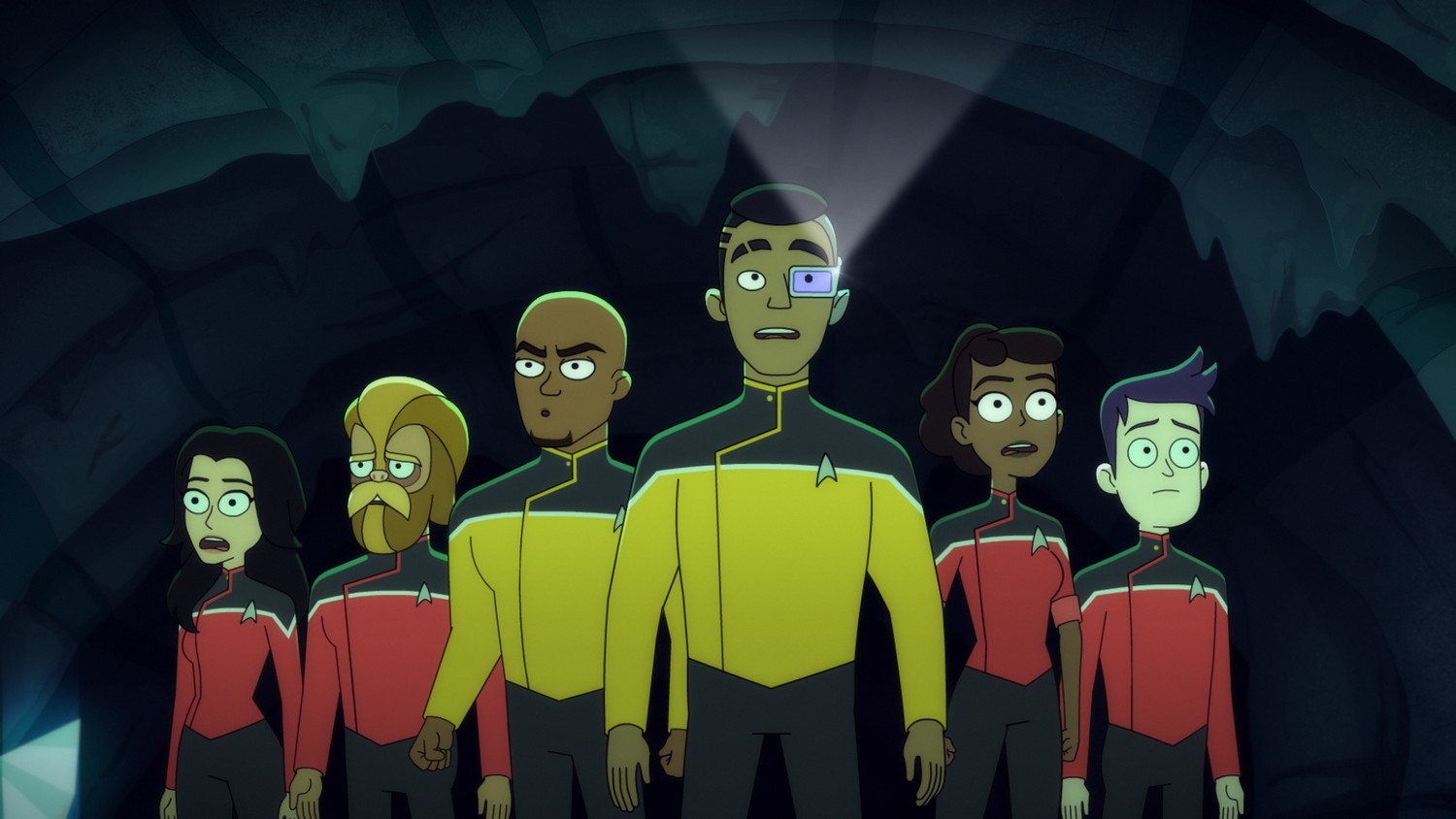 The scientist uniforms are reminiscent of the ones we see both throughout TOS and in the TNG episode “The Quality of Life”. The ensigns are told to stave off orb-induced fantasies by thinking of Parrises Squares which is a sport people usually play on the holodeck. Rutherford fantasizes about Dr. Leah Brahms, a warp field scientist who helped create the galaxy-class warp core. Geordi LaForge also fantasizes about Dr. Brahms in the TNG episode “Disaster”.

While naming things the Cerritos gets up to, Boimler points out they have not done time travel yet. This is a reference to the number of occasions in which time nonsense occurs in the Star Trek franchise. Rutherford is able to see Mariner’s elevated heart rate using his cybernetic implants. Geordi LaForge can also do this with his visor. Ransom complains about scientists getting eaten by plants, which never happens on Star Trek, but Sulu does have a carnivorous plant named Beauregard.

But the weirdest reference goes to the first, huge nightmare we see – a giant, flying bird with a lizard’s head. 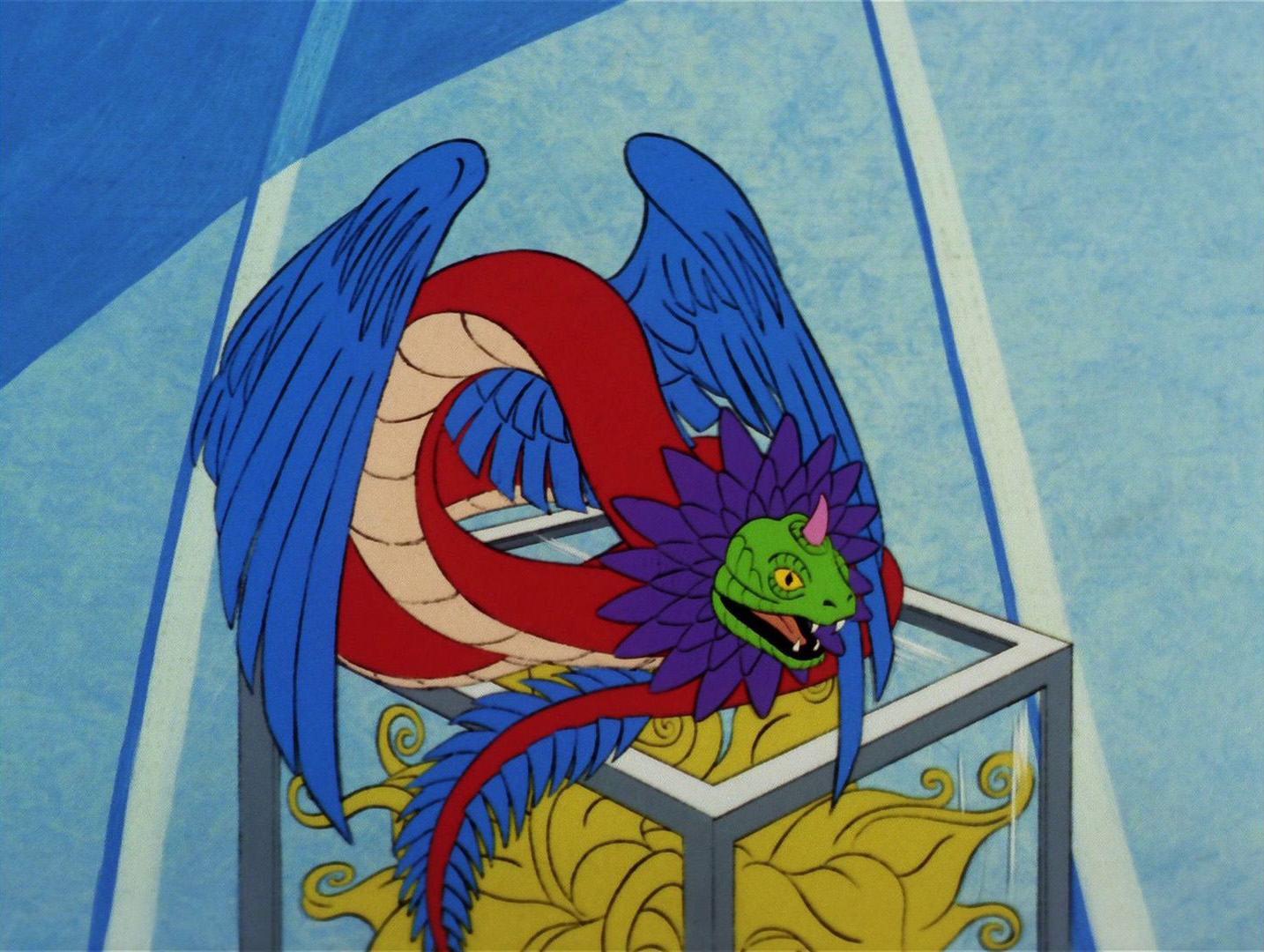 As you might expect, Star Trek: Lower Decks is the most likely series in the franchise to reference Star Trek: The Animated Series. Not only are they both cartoons, but referencing Trek’s past is kind of Lower Deck‘s thing. Last season, the show revealed the skeleton of the giant Spock clone which appears in the TAS episode “The Infinite Vulcan”.

“Mining the Mind’s Mines” gets another TAS reference, this time to the episode “How Sharper Than a Serpent’s Tooth”. Lieutenant Commander Steve Stevens gets attacked by a giant flying serpent with feathers and a snake’s head. Stevens screams out a name: Kukulkan. Leaving aside the fact that he pronounces it differently, this is the same creature Kirk and co. encounter in “How Sharper Than a Serpent’s Tooth”.

Kukulkan is an ancient alien who helped Egyptian, Mayan, Aztec, and South Asian civilizations evolve in Earth’s past. He tries to dominate the Enterprise but they fight him off. The best part of this Easter Egg is Stevens’ pronunciation. Stevens puts his emphasis on the second syllable, which is incorrect. This is in reference to the fact that Shatner also mispronounces the name, albeit as “Kuklakan”. Nothing like keeping traditions alive! 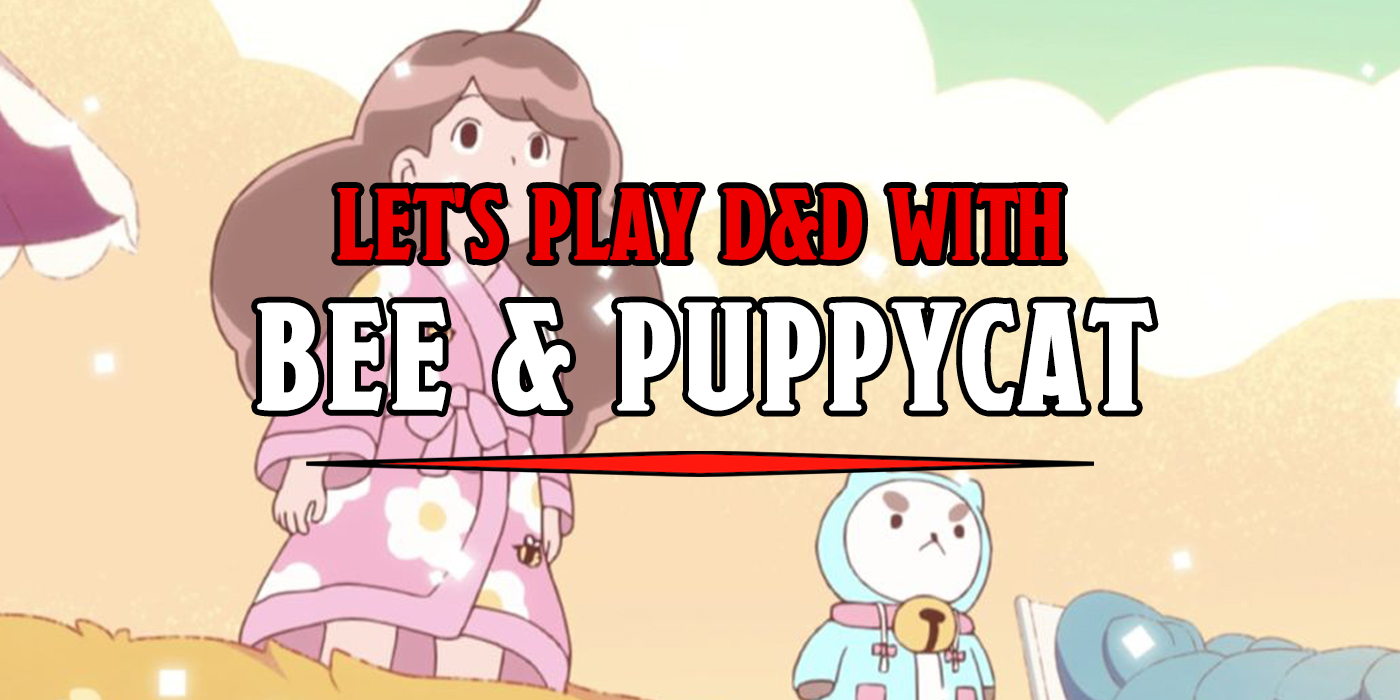