Goatboy’s Warhammer 40K : So, About Those New World Eaters 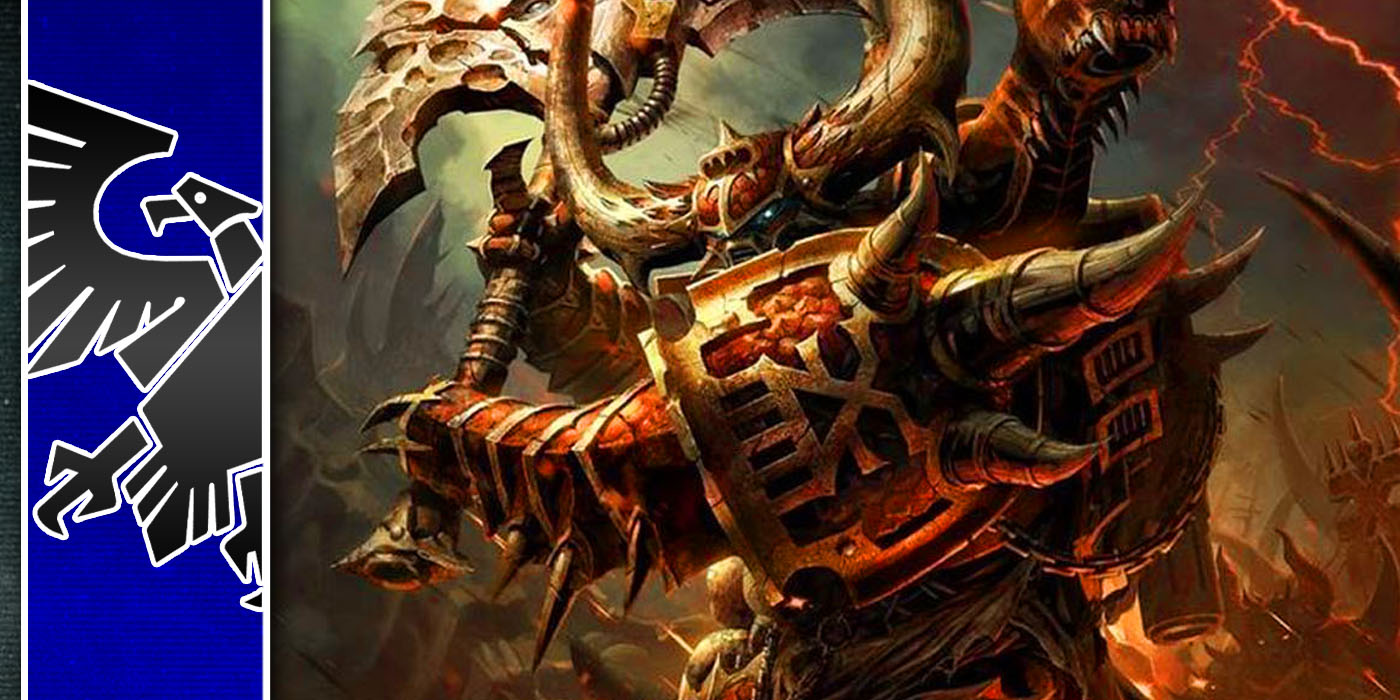 Goatboy here to talk all about the upcoming new World Eaters release. Blood for the Blood God!

I won’t lie – I am very excited for the release as just like every CSM player a World Eaters army is something we’ve all wanted, planned for, and even completed at some point in our throes of Chaos Space Marine building.  In fact it is one of the more iconic armies out there with so many different ways you can go.  Of course this new book seems to really push it towards the daemonic side of things but I am sure you could figure out a really sweet Horus Heresy style White and Blue army if you wanted. 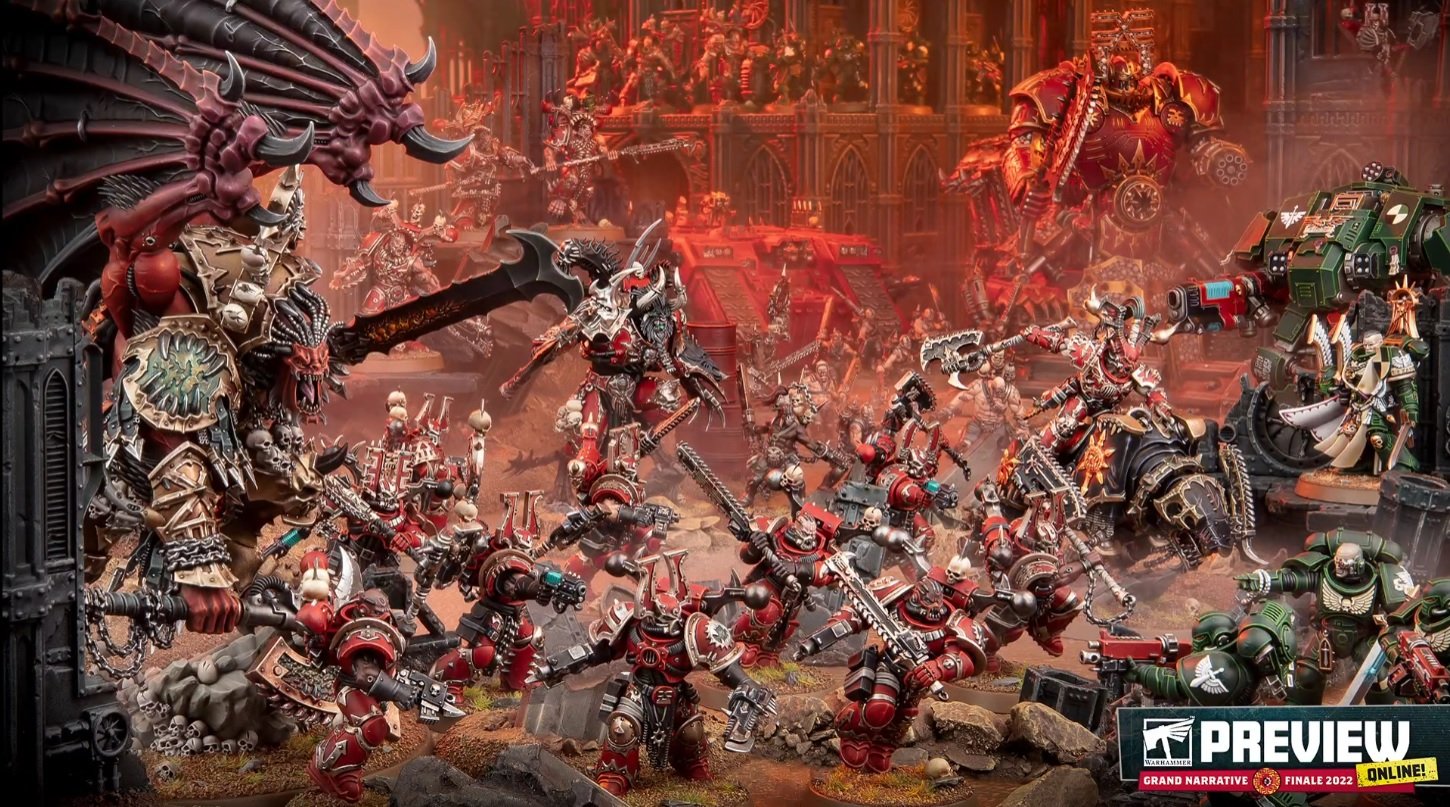 But that isn’t what I want to talk about today – I want to discuss what we were shown and what might be upcoming. There was a small leak earlier with some points that looks to be legit – at least the names of the units are.  While not a large amount of choices with some lacking elements (Why oh why don’t some of the Cult have bikes, or raptors, or other cool things!) it does  showcase some neat things that we got to see – namely the new Troop choice, a 2 tiered elite option, and what looks like a sweet HQ choice that isn’t just a named character. 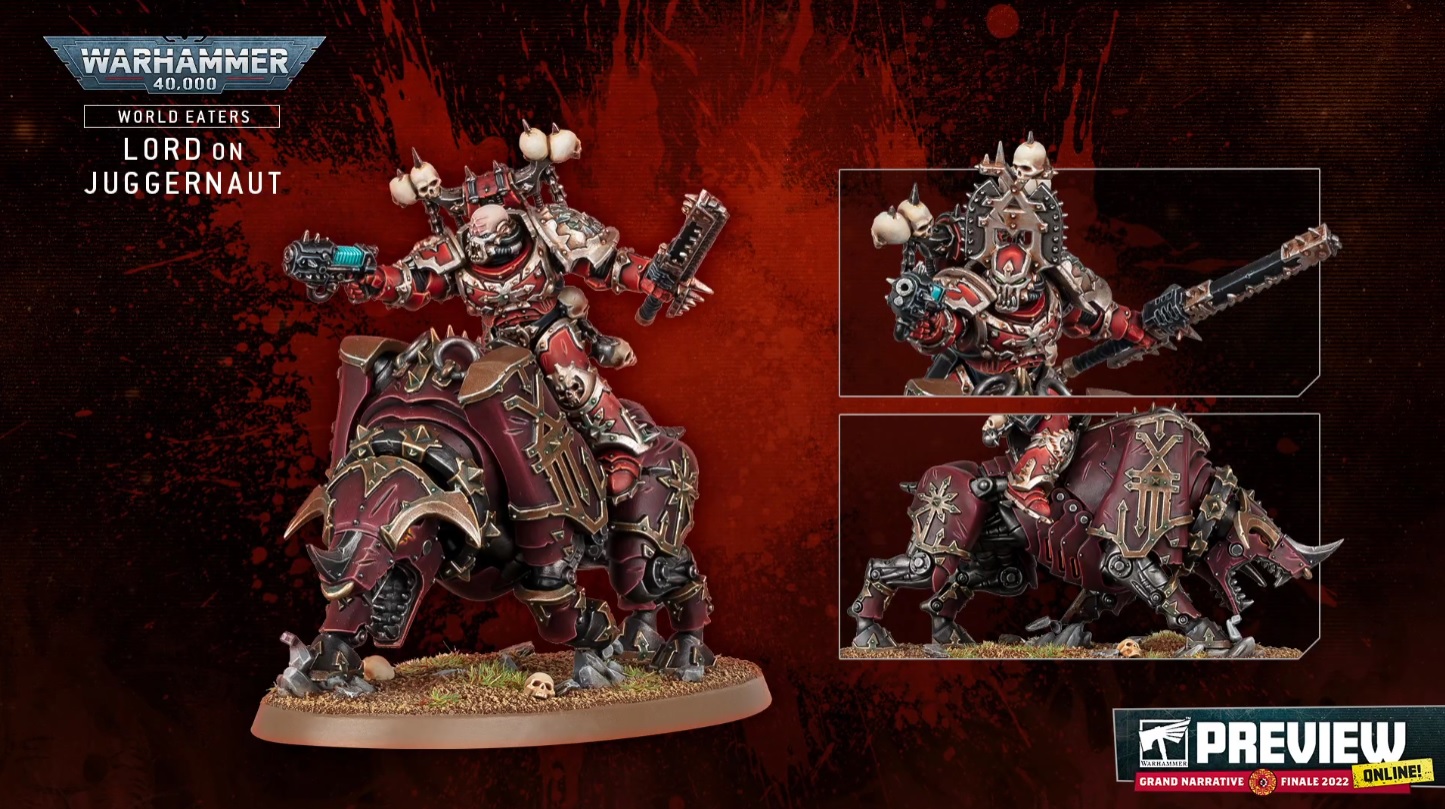 Let’s start with the HQ as we now see a Generic Juggernaut lord option.  I was really hoping for more Jugger rider options but it looks like that isn’t in the cards so we can really only look at having 2-3 in a list if we wanted to not have any CP.  The leak shows no options for it so the image is what we get – or all the options on there are free.  I am hoping for the later as we just saw a different head, plasma pistol, and some kind of chainsword option.  You would think there would be some killer Chainaxe like thing too but we will just have to wait to see.

I am guessing the unit will just be a super monster Chaos Lord or maybe some kind of mixture Exalted Champion option to allow for multiple stack reroll options.  Heck there isn’t a Dark Apostle so maybe this guy lines ups with that just due to riding some kind of monstrous Daemon like creature.  My only fear which includes the Special Character is that Cavalry is just a rough keyword to have.  I would hope he is a beast as he can Kool-aid man thru walls to bring the true truth of Khorne to the masses.  We’ll just have to wait and see as it looks like a nice “birthday” gift for myself as a January baby (and it falls on a Friday this year giving me a Friday the 13th spooky birthday – hopefully with a Tattoo). 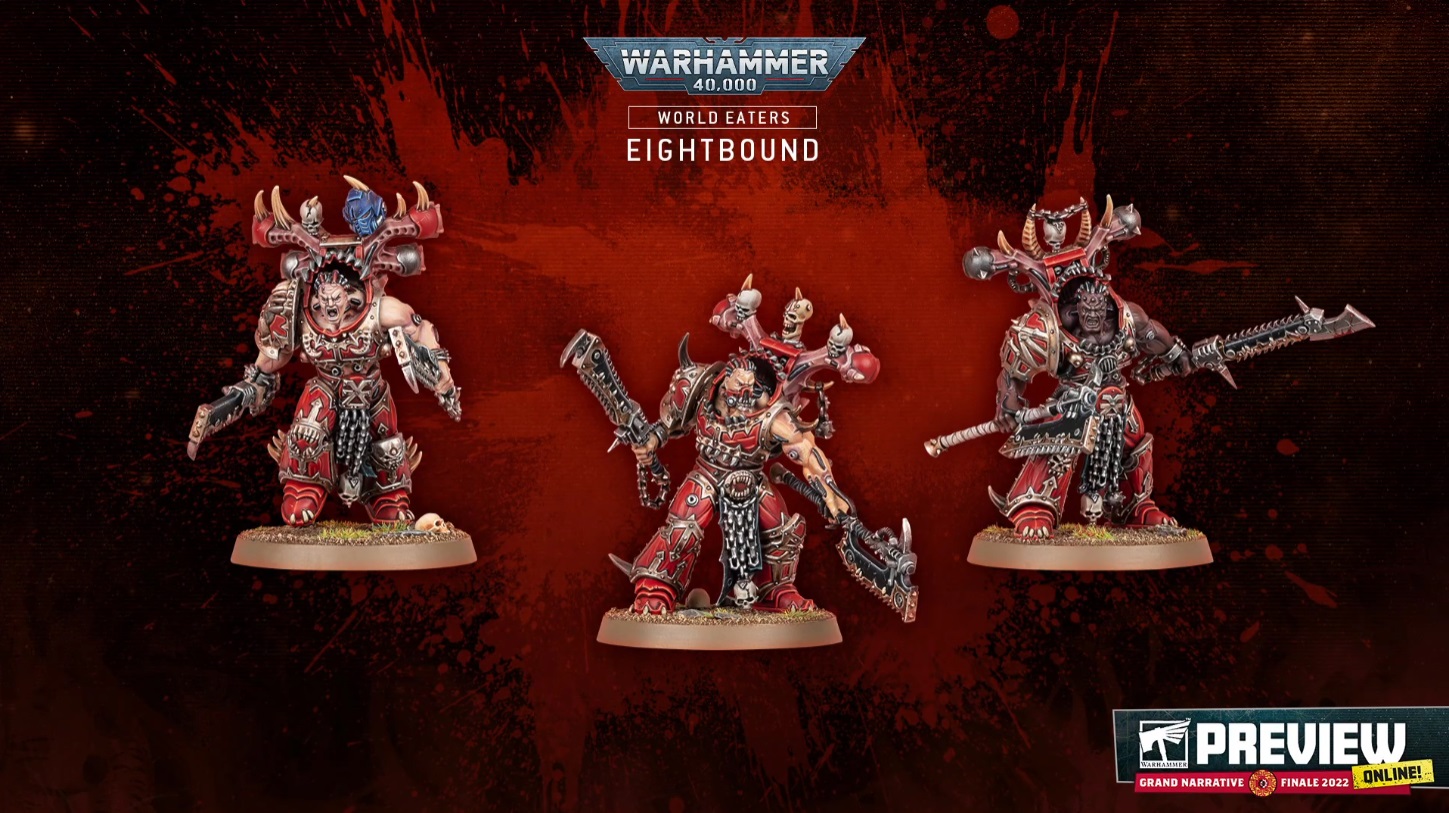 Next up we look at the two Elite choices with the Eightbound and the Exalted Eightbound.  It feels like a weird unit as one option is 3-6 (matching up with some kind of interesting Chosen/Possessed option) and the Exalted being a locked in 3 unit choice.  It doesn’t look like the box really syncs up as the models look pretty different so the question is what do these guys do?  If they are possessed I would hope they have more wounds being locked at 3-6 (why not 8?) and the whole having 8 daemons attached to their spirit. 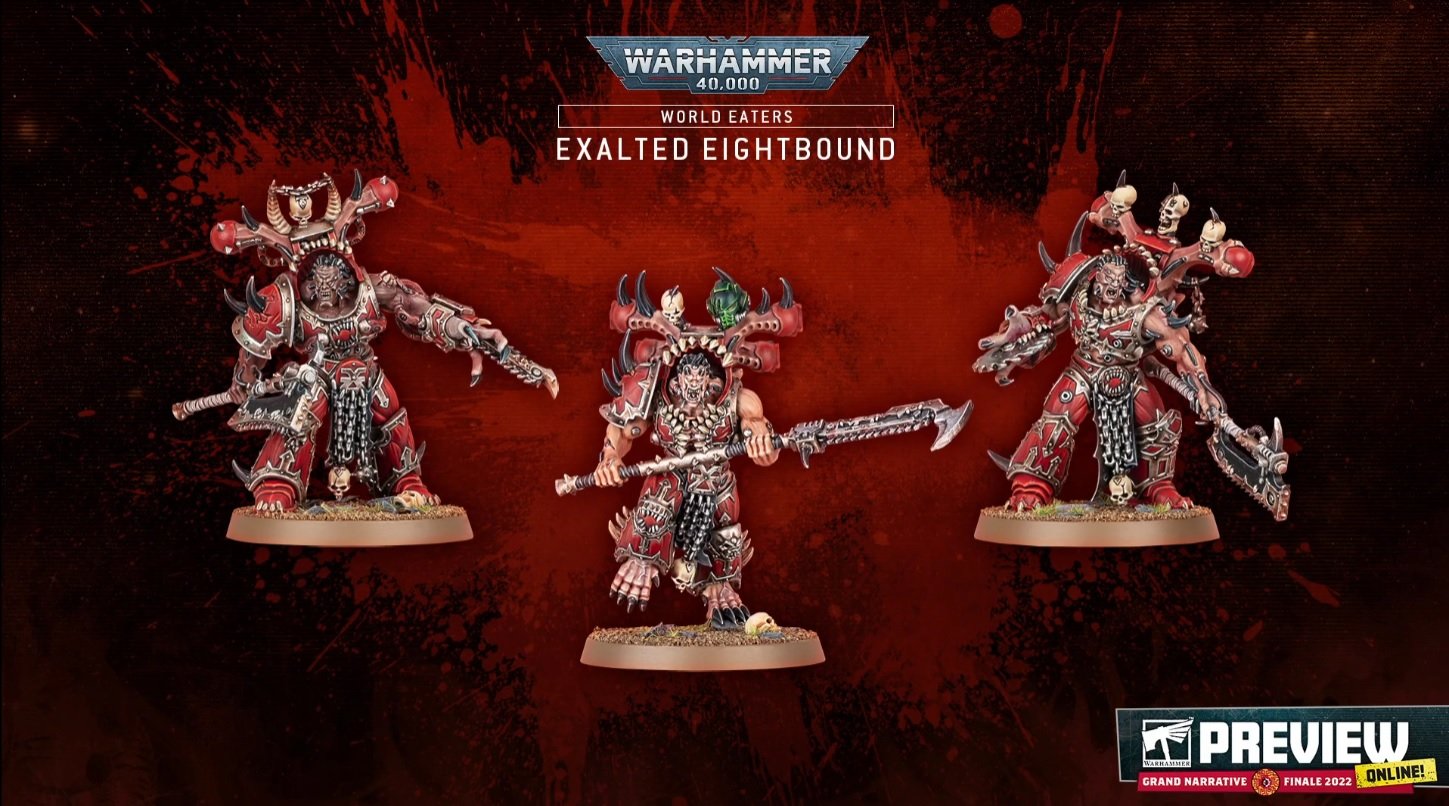 I do wonder if the Exalted versions are some kind of split apart HQ like choice that can run around and help out the armies? They might provide some kind of bonus for the Daemonic choices or just – being more brutal than the regular one just as a Character option.  Or we go in a completely different direction and make them the actual “prayer” point or Wulfen like option that just explodes out a set of Auras to get your boys super mad.  There is a lot of thought to this and while it sort of matches up with how the initial Thousand Sons release had the Exalted Sorcerer box we might see something a bit different.  We’ll  just have to wait and see. 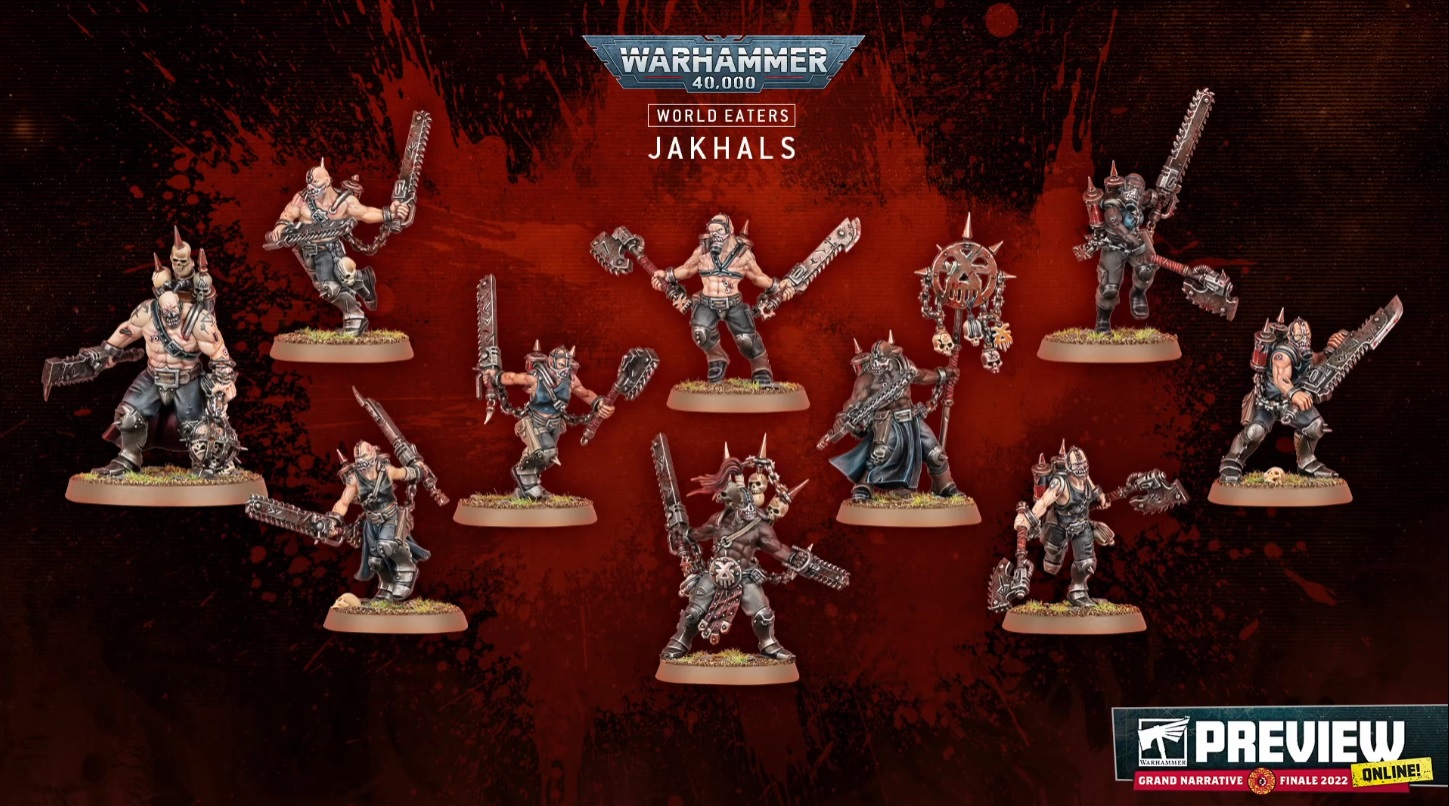 Finally on today’s batch of stuff the Jackhals are a coming with a bunch of crazy looking Cultists of Khorne.  I hope they are good but lately any Cultist option just feels out of place in the current 40k environment.  A wet fart murders these types of units and any way to make them better still isn’t used that much.  The crazy mutated cultists from the newest release are just a tad bit expensive mixed with not being able to do much other than hang out and loiter on an objective.  I hope these guys are just not a cheap troop choice to drop some kind of skull banner on. Hopefully they do something neat like Sacrifice themselves to increase a blood tithe thing or something else cool.  They models look sweet with the giant looking guy carrying a morning star of death. 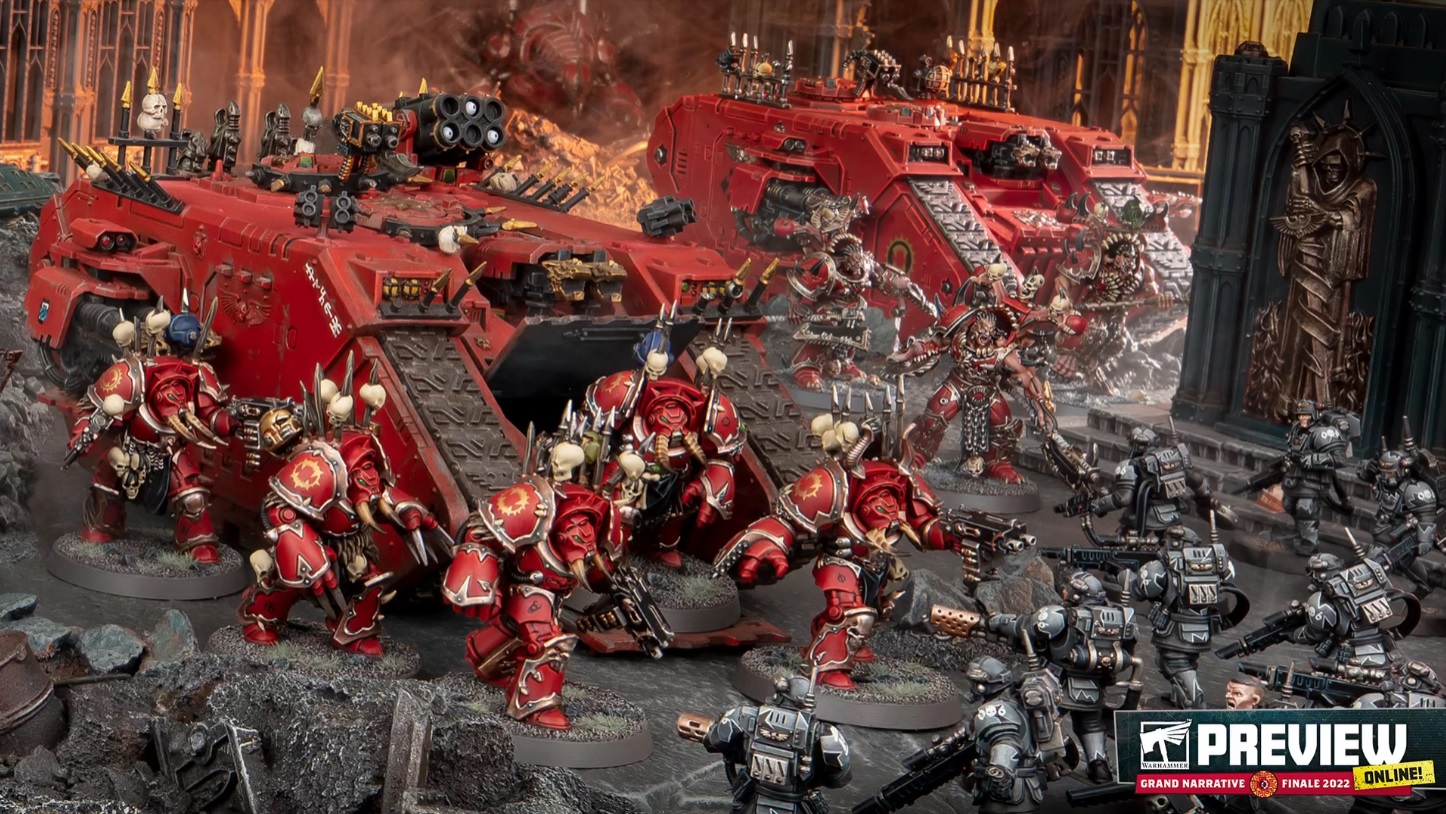 Terminators – Where are the Red Butchers?

Those are the ideas from the new pics and the leak showcases a rather lean book.  The Terminators don’t have any kind of Butcher like name but they are more expensive than their CSM counterparts.  More than just a Mark of Khorne.  I don’t know if this means they just get some extra rules like Fight twice or we have to pay for their upgrade in another way.  I don’t like paying CP for them and while the current  book lets you take the Black Run of Damnation I am guessing this book won’t have something similar.  Again it has me hoping we got some kind of Prayer action or other unique thing to help keep your guys alive as they run across the table screaming about Skulls, Blood, and the Rent being too damned high. 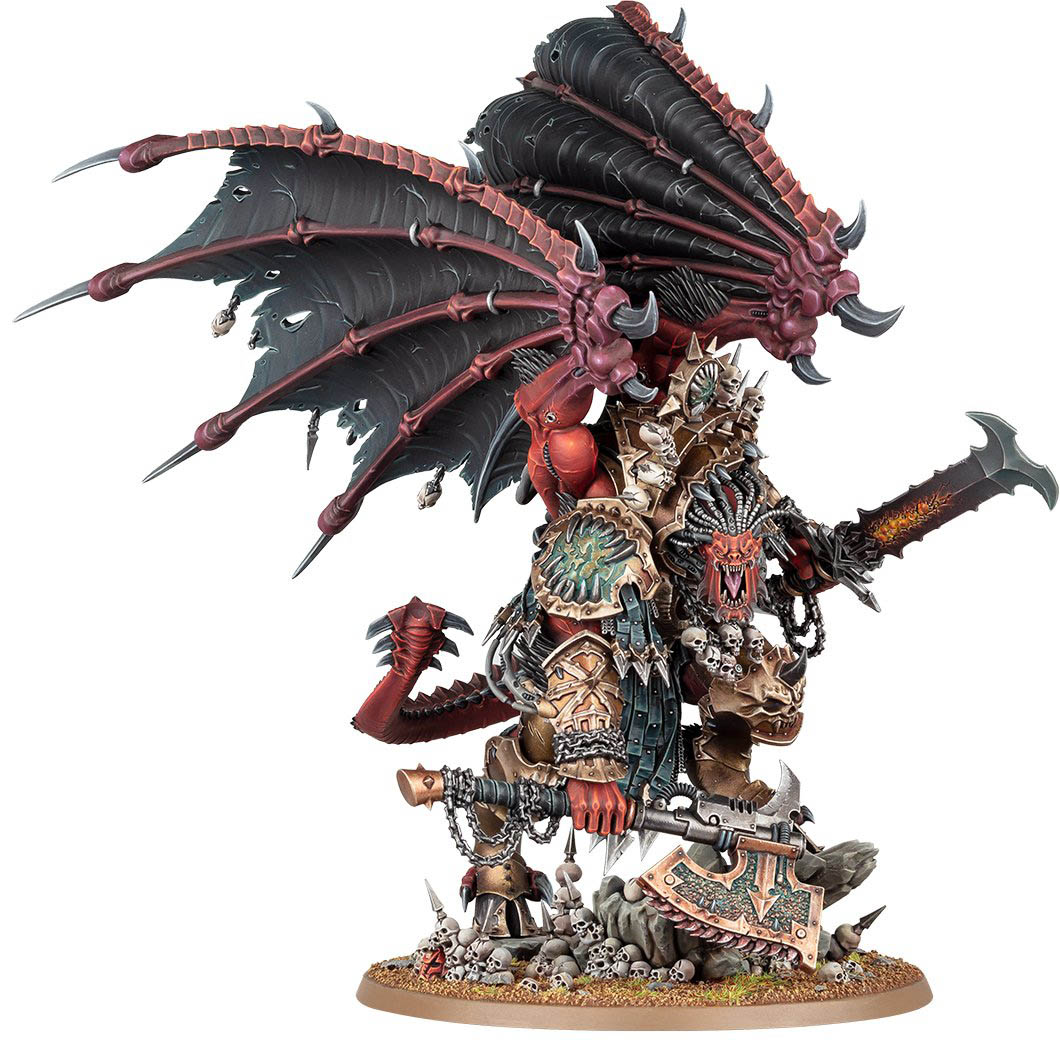 I was hoping we got some kind of cool Daemonic Engine of death that Khorne used to have in epic and other games.  The Lord of Skulls is there and while that is cool it isn’t setting the world on fire with its Tonka truck like treads and bad attitude.  Angron ends up being the other Lord of War and his cost seems low to other Primarchs but more than some of the Greater Daemons.  I hope he is at least as good as the crazy Bloodthirster option that is out there but will have to wait and see.  At least he has kept his wings unlike Skarbrand.  The Maulerfiend is at least part of the book and I hope we have some cool stacking options with them as a whole Brass Stampede would be neat to play with and maybe against.

I am excited for the book and while I am not getting everything I wanted I am still getting some cool options.  Another Primarch is cool, new Juggernaut nonsense is great, and most likely the new Daemon Prince kit will come out too – letting you have a completely new “Plastic” army of death with updated models all over.  I am hopeful everyone has a great Thanksgiving and while I am not getting World Eaters for my turkey day it does look like my Birthday is going to be full of angry red chaos space marines. 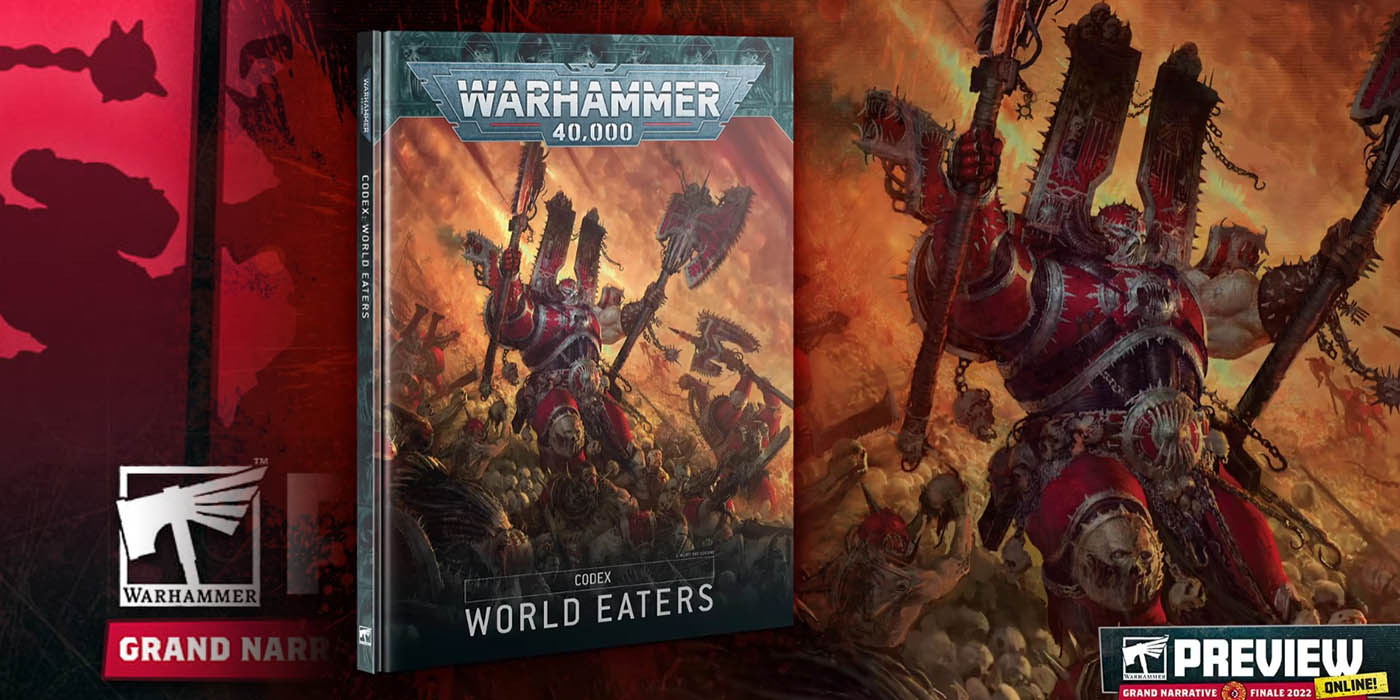 Author: Thomas / Goatboy
Thomas Reidy, aka Goatboy, the ever-evil member of BoLS. I do arts, play 40k, and even paint a lot of stuff. I have been playing Warhammer 40K since the 1990s, and have won multiple national events including Adepticon and GW GTs. I've been writing for BoLS for 15 years. Look at my Instagram to see what I am working on - or working on for someone. I am always doing something hobby related.
Advertisement
Rules Tactics Wargames Warhammer 40k Warhammer 40K 9th Edition World Eaters
Advertisement 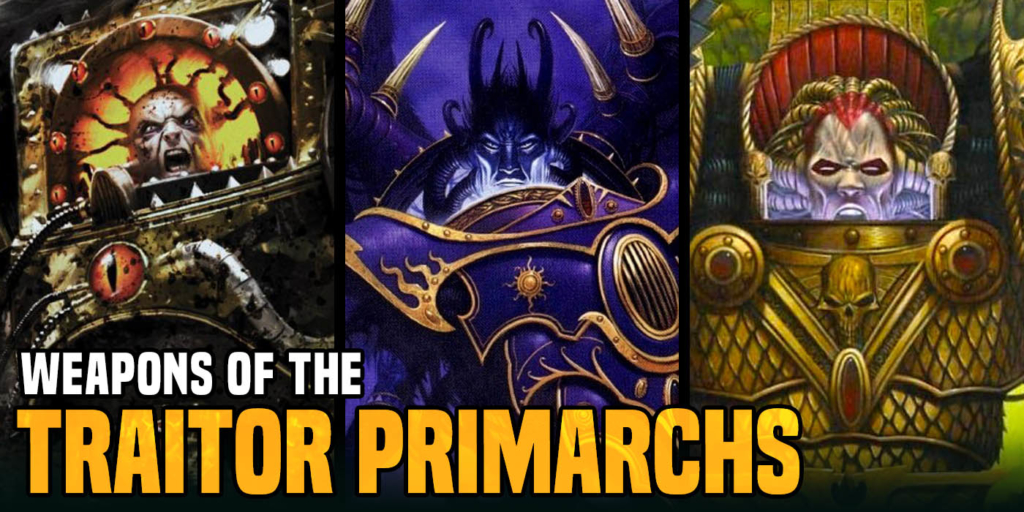