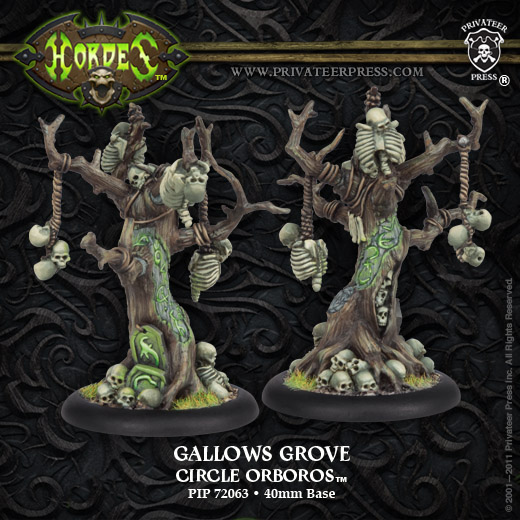 I’ve had about a month’s time to play with Circle Orboros’s new channeling solos, so I figured it’s about time I weighed in on them.

Starting with the models themselves, I was interested to find that they were a hybrid resin/pewter affair.  As seen below the trunk of the Groves consists of resin, while the branches and “hanging bits” are all metal. They went together quickly, the only thing really requiring a pin being the pieces that hang from the branches.  In terms of preparation, I’m fairly happy with what we received here.

In terms of the actual detail, I’m not quite as impressed as I was with Wurmwood, which I felt had more texture, particularly in the bark.  Since the Groves didn’t quite have a similar variance, it didn’t quite respond as well to washes as Wurmwood.  The Groves are also loaded with enough skulls to make a Citadel modeler blush, although, I will grant that they are a seemingly important facet of the model from a fictional standpoint.

My quick method for painting them was to apply a P3 Gun Corps Brown base coat to the bark and a P3 Jack Bone base coat to the exposed trunk.  Both areas were given extensive washes of Citadel Devlan Mud and Citadel Gryphonne Sepia respectively with the “inner carvings” getting a careful, localized shading with Citadel Thraka Green.  This accounted for about 90% of the work to be done, leaving just the various bones, hanging rope, and rune stones at the Grove’s base.  It’s not the most refined work, but it gets the job done fast and gets your models on the table without having to labor with a wet palette. In terms of the Groves’ rules, the addition of any kind of non-exclusive channeling device is going to be a big deal in any faction you introduce it to, and I feel like the Gallows Groves are no exception here.  I’ve given my pair of Gallows Groves table time with several warlocks, including Cassius, Epic Krueger.  In both cases, I found them to be valuable additions.  Here’s the 50-point Cassius list that I’ve been running a lot lately:

Where Cassius is concerned, the Groves provided a fantastic means for allowing me to sling spells aggressively without having to expose Cassius or Wurmwood to the danger that I was accustomed to with them.  Channeling Hellmouth through a Grove onto one of my own carefully placed Shifting Stones chewed up infantry all day long, and also allowed me to open up some charge lanes thanks to the added push effect.  With Epic Krueger, I found that I was relying much less on Woldwardens or Megalith to get spells where I needed them since I had another means of delivering my spells.  This meant lots of points saved on expensive Geomancy-ing warbeasts.

What I did notice is that there rather short range means that they have to both be played aggressively and protected from ranged threats by getting concealment.  Since they cannot be placed via Teleportation from Shifting Stones and they can only be placed 5″ from the original position with their Strange Growth rule, they don’t quite get up-field as fast as a bonejack or a Spell Martyr.  In the games that I did not have any kind of ability to place smoke clouds or forests, I found that since I had to keep them relatively close the action, my Groves were getting clipped by long-ranged fire from things like Redeemers, Winterguard Mortar Teams, and other typically-inaccurate gun platforms that had no problem hitting a Grove’s DEF 5.

To me, this meant that reliable application of Gallows Groves as effective threat vectors for spells is going to require the means to let them take advantage of Prowl.  Since you can’t ever count on terrain working for you when you really need it, this means you’ll have to be able to make it yourself, whether by a Druid’s Summon Vortex ability, a forest made by a Woldwarden, Mannikin, or Baldur, or even a smoke cloud from a unit of Swamp Gobbers. Gallows Groves make excellent 1-point filler, but without protection, my opponents have become wise enough to take them out before I can use them to tip the scales in my favor.  So, if you’re taking them as filler without any kind of protection, remember that you brought them as filler and not as a central part of your list strategy when they get shot to pieces before you can use them.

I found their Entropic Force ability to be handy a few games as well, using it to chew through a Winterguard Deathstar benefiting from Tough via Grigorovich.  Reminding your opponent that they do not, in fact, get to make Tough rolls when close to a Grove was a highly rewarding moment for me.

Moving forward, I’m excited to say that I think that Groves will become fairly ubiquitous for Circle.  It’s a fantastic 1-point option that can benefit any warlock, so if you haven’t seen your local Circle players putting them on the table, you soon will, and often.