40k: Orks – How to Setup Battlewagons 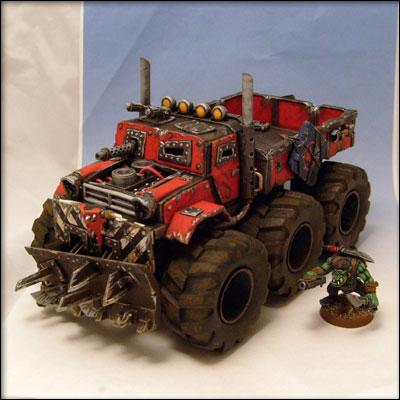 Battlewagons – what’s not to love?  Lets take a look around the Orky showroom and see what an aspiring Warboss should get.

Mercer from www.imperiusdominatus.com here. So my mate John is doing Orks. In a way I miss my Orks, then I remember the issues they have. Don’t get me wrong, I am not trying to piss on people’s chips, those are just my thoughts. Orks are a pretty fun army, they don’t need loads of tweaks to get them sorted and against the wrong army they can clear house. I think what really finished Orks off for me was doing a Kan Wall list, which looking back wasn’t a good idea.

So, Battlewagons then. I think Battlewagon rush is probably the best Ork list you’re going to get. Kan Wall is too slow, Trukks carry too few numbers and Nobz get gibbed by S8 etc.

The problemwith Battlewagons is they provide too many options, and this gets people confused. Too often do I see Battlewagons setup with multiple guns, yet transporting a unit. The clue is the name with Battlewagon rush, it’s a rush! Battlewagons should be moving forward and acting as a transport vehicle and mashing stuff, not moving at a slower pacer in order to fire. If you take additional weapons then the vehicle is having a negative effect and holding the Orks back inside, their purpose is to get into assault and beat some ‘eads!

Da Opshunz
So what’s the best way to setup a Battlewagon? Well you must always keep in mind that it’s a transport vehicle and it needs to keep moving, so no larger gun options i.e kill kannon or zzap gun. The only ranged weapon you need is a big shoota. Reason is the Battlewagon has no weapon, so any weapon destroyed result turns into immobilised, bad times.

RPJ gives that extra 1″, it doesn’t sound a lot, but when you’ve got the proper deffrolla kit on your Battlewagons then it’s going to help. Plus that little bit extra will help for an army which needs to be in assault.

Deffrolla is the spikey smashy thing everyone loves. If you don’t know what it does, it causes D6 S10 hits when performing a tank shock or ram. Not too awesome for infantry, as they get a armour save, though against vehicles it’s pretty brutal.

Lets to quick check – your basic Battlewagon or Deffwagon because that sounds sooo much cooler, is going to cost 120 points. That’s pretty groovy. But wait, there’s moar! 🙂

Now these aren’t mandatory upgrades, but are certainly useful. A boarding plank allows one single model to make a attack as if it was in base contact, excellent for a power klaw attack if your deffrolla failed to get the job done. Armour plates are like extra armour, handy for keeping the Battlewagon moving. Both these upgrades cost 5 points a pop, which brings the Battlewagon to 130 points of S10 deff.

Now we know how to setup a Battlewagon, these will max out the heavy support.

Load Em Up
At the moment just got triple Battlewagons, not really a huge amount of vehicles and also nothing inside them. Lets add some troops and take 3 x 20 Boyz with a Nob with power klaw and bosspole, this has cost 480 points in total for the troops.

Two units/models need to be added to take more Battlewagons; a Warboss and a min unit of Meganobz. I know you’re screaming Meganobz and why not Nobz, but let me tell you. A decent tooled up unit of Nobz is going to cost about 350 – 400 points, and with Battlewagons already taking up a sizable chunk, points shouldn’t be invested into point sink units like Nobz. Three Meganobz with two kombi weapons are going to cost 130 points. A Warboss with a power klaw, attack squig, cybork body and bosspole will cost 115 points. You could put the Warboss in mega armour for a extra 15 points, which makes the Warboss a Terminator! We’ll see…

A very important unit/model in a Battlewagon list is a Big Mek. Give him a KFF and keep it simple all for 85 points. If there’s points to burn later, then they we’ll go on the Big Mek.

At the moment the list has four Battlewagons, and without getting another Warboss and Meganobz unit, then there won’t be anymore added. You’ve got plenty of up close killy death, though you need ranged support and that’s where Lootas come in. People say that Lootas are best in units of 5 or units of 15, this is because if 5 run off it’s a low investment and unit of 15 need to lose 5 models before they are not fearless, and then they are leadership 10. Because I am a shepherd and not a sheep (and maybe a tad awkward) I prefer units of 9. My reason for this odd choice is because I’ve used units of 5 and really they need good dice rolls for shooting to have a decent impact. I’ve used units of 15 and they cost some serious points and you do not need 45 shots to blow up a vehicle. I’ve found units of 9 Lootas to be the sweet spot, they fire enough shots to get the job done, they don’t cost billions of points and 3 Lootas need to die to force a morale test, if the Lootas walk away you’re losing 90 points, which isn’t too bad. So three unit of nine Lootas will be spot on.

This next addition to the list is really down to preference and that’s either Deffkoptas or Warbuggies. You can see a article here Deffkopta vs Warbuggie.

I prefer the Deffkopta as the alpha strike ability is golden, plus it makes a excellent distraction unit that can contest objectives later on in the game. The only downside to Deffkoptas is they give away an easy kill point. I always have my Koptas with twin-linked rokkit and buzzsaw, it’s the only way to do it, and they cost 70 points a pop.

Currently the list stands at 1,945. You could take 3 x 2 units of Warbuggies with twin-linked rokkits, I will note that this is equal amount of kill points to Deffkoptas anyway (and the same cost).

Now, lastly, to add my favorite and also game winning unit; Gretchin. Don’t mock the Gretchin you in the back. While the Boyz are claiming heads, the Gretchin bunker down. Because they are so tiny, they hide nicely in ruins and LOS cannot be drawn to them and more often than not the opponent forgets they are there. They then stroll out in the later turns of the game and claim a objective while Deffkoptas contest all others. With the 55 points remaining could get a unit of 10 Gretchin with a Runtherd with a grot prod. That leaves 10 points remaining.

Ok, I know this isn’t too far from a normal Battlewagon list, the core is pretty much the same, Battlewagons with Loota support. While this is a list building exercise, it also shows more importantly how to setup those Battlewagons correctly, I’ve lost count how many lists I see which have multiple big shootas and kill kannons etc on the Battlewagons.

Tactics are also pretty simple with this list. Pray for first turn, scout the Koptas and alpha strike key targets. If a target is even suppressed by the Koptas then they’ve done their job. Battlewagons blast forward as the Koptas act as distraction units, the more fire power those Koptas absorb, then the better. The Gretchin just stay in reserve so they don’t end up getting blasted to pieces and being a easy kill point etc.

Ok, saying pray for first turn isn’t the most tactical thing to say, but if you do get second turn, try and setup refused flank if possible and still scout the Koptas, though not towards the enemy – the 3+ cover save from turbo boost will keep the Koptas alive, act as distraction units and even if the enemy doesn’t shoot them (because Koptas are hidden) then it will keep them on their toes.

The only tweaks I can think of is maybe ditching a Boy from a squad and throwing the Big Mek in there, this way not all the eggs are in one basket. With the point remaining give the Warboss mega armour. When the Warboss is close enough, bail him out and send him on a one man wrecking spree, 2+ armour save with 6 S10 attacks on the charge is going to cause some trouble – waaaaaaaagh!

Ok, it’s a common list and not a new thing, but now you know how to setup Battlewagons right. What do you think about Ork Battlewagon lists? Rate ’em or hate ’em?