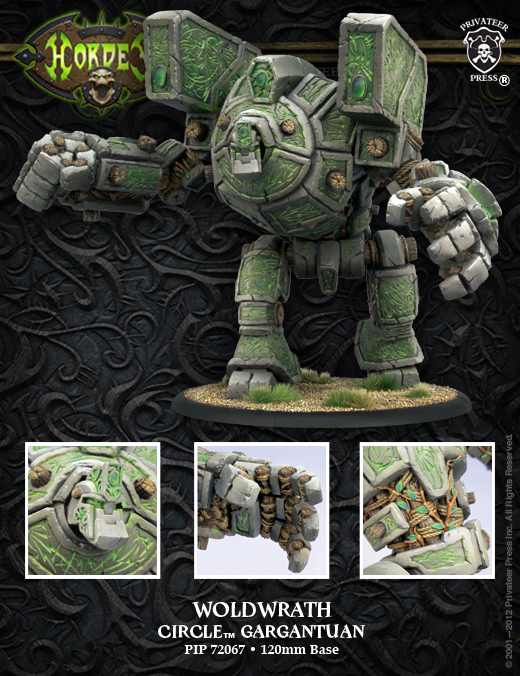 October is here, which means that the Woldwrath will soon be released upon the masses.  Lets take a closer look.

We’ve had his stats for a few months since mid-summer, so they’ve had some time to settle in my mind.  Now that the Woldwrath will shortly hit my painting table, it’s time that I seriously started to consider how to use it.

While I would never state that Circle is a pillow-fisted faction, their warbeasts, with the exception of a STR-warping Ghetorix, often require Primal or a STR-buffing spell to get the job done against hardened targets.  Woldwraths fortunately sit on a high, natural P+S 19 with their paired Stone Fist attacks, meaning that they’ll be able to get the heavy lifting done without a lot of help.

This is compounded by the Earth Shaker rule on their fists, which places a 4″ AOE over the model hit, knocking down everything underneath, helping to remove dice from the equation when it comes to hitting their targets with repeated attacks.  This can be used in a number of clever ways, like hitting a low-DEF target standing next to a high-DEF warcaster or warlock, knocking both of them down and making the latter primed for pounding.

Druid’s Wrath, the Woldwrath’s animus, is really interesting in its potential application when it comes to list building.  For the uninitiated, when a Woldwrath uses its animus, any magic attack targeting an enemy model within 10″ of the Woldwrath is automatically boosted.  This additionally makes Woldwraths a very solid support piece for models that use offensive magic, particularly those that have critical effects (usually Knockdown).  Druids of Orboros become very accurate with their Force Bolt attacks, the Stone Keeper’s oft-forgotten Rock Hammer attack suddenly becomes a serious threat, and low-Fury warlocks with strong offensive spells like Baldur1, Cassius, or Kaya1 suddenly have new and exciting applications.  The only real drawback to Druid’s Wrath is that it only affects models that are targeted by magic attacks, leaving their effectiveness with spray attacks like the Blackclad Wayfarer’s Stone Spray or Baldur2’s Crevasse somewhat less impressive than what we might have originally thought at first glance.

Spell Ward is arguably both a strength and a weakness, perhaps leaning more towards the latter than the former.  Immunity to dangerous denial spells or ARM debuffs can be a big deal for a 20-point investment since it represents such a large portion of your list build.  However, Spell Ward also keeps you from being able to increase a Woldwrath’s survivability with Circle’s various ARM buffs like Inviolable Resolve, Stone Strength, or Roots of the Earth (unless it’s Baldur2’s feat turn).  Spell Ward is also arguably redundant with the Druids of Orboros and their Counter Magic ability, which feels counter-synergistic considering the benefit that Druid’s Wrath lends to the unit.  It’s also worth pointing out that Spell Ward doesn’t deny warbeast-casted animi.  While Circle doesn’t have a ton of great animi that aren’t Target: Self, they do have a few of note that might be worth a look, like the Gnarlhorn’s Bounding to give the Woldwrath some much-needed extra movement in addition to a +2 bonus on charge, slam, or trample attack rolls.

The Construct rule is also somewhat of a contentious rule here as well.  While it does provide frenzy immunity as well as protection from spells or abilities that are naturally strong against living models, it also makes the Woldwrath more difficult to heal, effectively limiting the user to running either Baldur variant or using a unit of Shifting Stones and their ability to heal a paltry d3 damage per-turn in lieu of teleporting your models around.

My primary concern with Woldwraths is their point cost in relation to their Fury value.  Being able to only generate four Fury a turn means that I’ll certainly want to run other warbeasts, but at a hefty 20 points, finding room to fit in other beasts will make building lists with a Woldwrath a challenge.

Protecting a Woldwrath also seems like it could be a challenge.  Taking advantage of terrain and model placement is going to be a big deal, as will using any means of denial that you might have at your disposal.  While creating forests won’t stop the enemy from drawing line of sight to a Woldwrath, it could slow the opponent down.  You could back this up by bringing along Lanyssa Ryssyl for Winter Storm’s removal of Flight and Pathfinder from enemy models, further slowing the advance.

Alternatively, you could screen your Woldwrath with a pair of models that are immune to lightning-type damage, then hit them with Lightning Strikes to put a pair of Storm Generator AOEs on their heads, stopping non-Reach, single-wound infantry from closing in without suffering damage rolls.  Mannikins might actually serve well for this.  It’s sort of a poor man’s Covering Fire, but it could work depending on the situation.

Getting the Woldwrath to hum is going to take some experimenting and practice.  I’ve been somewhat spoiled by the Stormwall and its ease of use and obvious synergies.  I see potential with a lot of warlocks.  Being able to get free boosts on Influence could create some really cool spell chains for Morvahna and not having to spend to boost Eruption of Life makes that spell more palatable.  Kreuger2’s Stormwall and his offensive control spells become a bit more interesting with free boosts.  Mohsar can actually provide some good protection with Pillar of Salt and he gets a nice, 120mm base to hide behind.  Cassius gets really interesting with free boosts for his many solid offensive spells, which is a big deal with his low Fury stat, and again a Woldwrath provides a nice way to keep Cassius and Wyrmwood hidden.  Baldur1 will certainly get some nice mileage with Earth Spikes, and both he and Baldur2 will be able to provide some protection with terrain creation.

A Woldwrath should be hitting my painting table soon, so stay tuned!