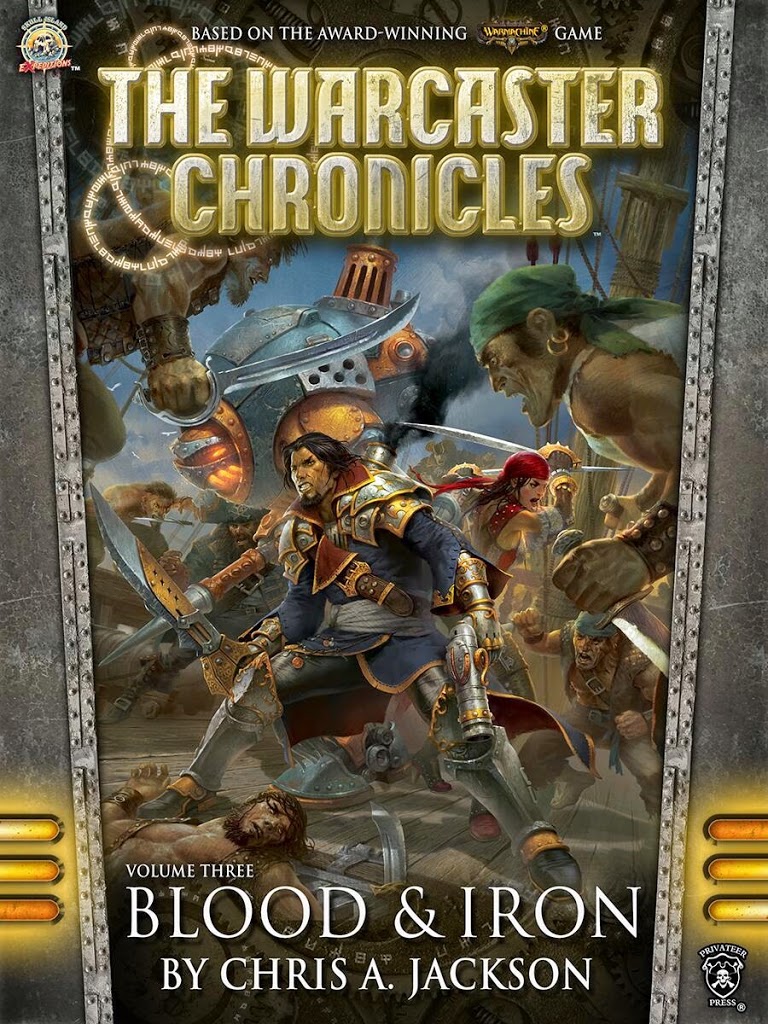 Skull Island Expeditions has released the third volume of the The Warcaster Chronicles series, entitled Blood and Iron, succeeding the Hugo-nominated novella, The Butcher of Khardov. Does Chris A. Jackson’s tale live up to its legacy?

This review will contain no spoilers from Blood and Iron, but may contain minor spoilers from earlier stories, specifically The Shae Mutiny and The Better Part of Valor. These two stories are crucial to understanding the origins of Phinneus Shae and how the former Cygnaran warcaster found himself brutally hunted by the Mercarian League. Both of these stories can be found in No Quarter Collection: Volume One.

Blood and Iron follows the continued trials and tribulations of the reluctant pirate warcaster, Phinneus Shae. When last we left Shae and the crew of the Talion, a raid on a Mercarian League stronghold lead to the acquisition of trade routes to the previously inaccessible continent of Zu. Using this information, the Talion has engaged in attacking Mercarian League ships returning from Zu and seizing their precious cargo of exotic goods. When a third of the Talion’s crew comes down with black spot fever, Shae is forced to lead a short expedition to acquire crucial ingredients in order for the ship’s doctor to prepare a proper treatment for the malady. This problem naturally leads to bigger problems, specifically two Mercarian League pirate hunters with an infamous Rhulic bounty hunter trapping the Talion and forcing Shae and his crew to fight for their lives.

Where the previous stories of Phinneus Shae and the crew of the Talion have been exclusively the dominion of the most-excellent wordsmith, Doug Seacat, I found that Chris A. Jackson has done a fine job of maintaining the tone, prose, and character originally penned by Seacat. Giving Mr. Jackson’s library of works a quick glance has revealed that he may have been the perfect author to take the reins on this novella considering his experience writing fantasy nautical fiction, particularly with stories pertaining to piracy. Consequently, he writes with a knowledge of sailing befitting the nature of Blood and Iron, lending a certain amount of authenticity to the story. Jackson also handles the unique aspects of the Iron Kingdoms with an expert hand despite never having written for the setting before. Blood and Iron itself almost exclusively follows the pirate captain Phinneus Shae. For the uninitiated, unjust treatment by the Captain Laross Fargen, captain of the Exeter, placed Phinneus Shae in the situation of taking up arms against Fargen or dying. Naturally choosing the former, Shae lead a mutiny aboard the Exeter and acquired a bounty on his head by the Mercarian League, a Cygnaran merchant consortium with its own well-armed fleet that protects its interests along the Broken Coast. Not only has the League devoted its vast resources to hunting down Shae, but it has made him a criminal in his own land and lead to his disownment by his family. For this, Shae and the crew of the Talion, most of them members of the original mutiny aboard the Exeter, have sworn vengeance against the Mercarian League and all its holdings.

Shae continues to present as a complex character in Blood and Iron. He is a man driven by both his need for retribution against the Mercarian League as well his responsibility that he feels for his crew. While Shae exhibits many of the common traits of the classic anti-hero, he is also a man wracked by guilt. He feels culpable for the lasting situation that he has placed his crew in, since it was his choice to raise a mutiny that placed them in the indefinite crosshairs of the vastly powerful and influential Mercarian League. Shae is an interesting personality, caught somewhere between the propriety of his upbringing and his status as a pirate captain, which one would think might lead to a certain lack of propriety.

This is not to say that Shae is really the only character in the story. Familiar faces like Hawk, Grogspar, Walls, Lady Aiyanna, Doc Killingsworth, and Joln Rockbottom are all present, but are all truly background personalities in attendance to service Shae’s continuing character arc, apropos given the book’s title and the tendencies of its parent series. New characters are introduced as well, many of them interesting in their own right, like Quinn and Evlyn Corcorian, the chief engineer and his gifted daughter and apprentice, and Ghostmaker, the unusual, yet consummate Rhulic assassin contracted by the Mercarian League to kill the story’s protagonist.

Overall, I found Blood and Iron to be a strong entry in the Skull Island Expedition catalog. Chris A. Jackson was a solid choice to continue in Doug Seacat’s place with the crew of the Talion and their endless pursuit of revenge against those that wronged them, and I look forward to the possibility of seeing more of his work in the Iron Kingdoms in the future.