Dr. Z’s 40k: The Misfit Toys of the Grimdark 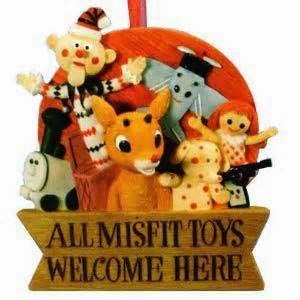 Doctor Z’s Laboratory is back today to take a look at some units we WISH were good but just make us really sad.

Do you remember when you first started playing 40k? Remember that first model or unit that you just loved? Maybe it was the fluff, maybe a huge number on its stat line, or its gun, maybe it was just the look of the model. Whatever it was you were in love and as surely as with the woman of your dreams you could see yourselves together forever. That unit was your destiny so you set down your buddies copy of the rule book (you didn’t own one yet), put on your finest hoodie, marched confidently down to your local game store got down one knee swept it off its rack and proposed to buy it from the owner. Regardless of what that unit was odds are you still love it. Maybe you’re still together and happy and if so congratulations are in order. Sadly for most of us it didn’t work out and we’ve had to move on. Oh, maybe not completely. You still care about it and every once in a while you still get it gussied up for an evening out at the club, but you’d hardly say you where committed anymore. What happened? Well long story short you just thought you could do better.
With that universal tale in mind I’ve put together a list of units that we as players really want to use but whose rules are so bad they just can’t be justified in anything but the most casual of games.Here in no particular order is a list of 40k units we just wish were better. With furious charge, rage counter attack, and WS 5, these guys still do a reasonable amount of damage, oh yeah and they’re fearless.  Sounds good, turns out not so much.  The trouble with these guys is that this edition hates close combat infantry (this is going to be a theme in this column) they are too slow to march across the battlefield on foot as any competent opponent will make sure they never get anywhere near his deployment zone. What compounds this problem is that the only dedicated transport they can take is a rhino and you can’t charge the turn you get out of it. So your best move looks like this.
Turn 1: move the Rhino 12”, flat out 6”.
Turn 2: move 6”, disembark up to 6”.
Turn 3:  move 6”, declare charge, resolve overwatch move your 0-1 remaining models in to base to base.
The worst part is that they don’t even hold up well in close combat against a lot of the current meta. Things like Wraithknights and Daemon Princes crush them without a fight.

The original bike army is looking a little dingy. White Scars are just better, they ignore dangerous terrain get a +1 bonus to their jink saves and have access to grav guns. Worst of all Raven Wing bikers are noticeably more points. If you own a Raven Wing army I recommend investing in some bleach.

One of the most iconic units in the game but sadly these veterans just can’t chew the leather anymore. I remember when 6th edition dropped and close combat weapons had started getting AP values I thought there might be a chance that these guys might be good again. The reality is that slow movement and vulnerability to weight of fire has made these guys a poor choice it’s a dark time for the Emperors finest. The other half of the Space Hulk set Genestealers are the quintessential Tyranid unit. Trouble is with only a 6+ save to keep them alive they rely on cover in a world where everything ignores cover. On top of that they don’t have offensive grenades? Really? You give us a unit with only a 6+ save who’s fluff is to strike from unexpected places and you don’t even let them swing first when doing that. I feel like there must be a hidden camera in the codex to catch our reactions the first time we read this. I keep thinking that I’m going to find a use for these guys but it just never happens. Yes you can go for the rifleman setup and do double twin linked autocannons it was awesome for busting open transports in 5thedition but that was years ago now. We live in the land of Wave Serpents and Imperial Knights now and it takes 8 of these guys to kill a jinking Serpent with a Holo Field. I’ve had limited luck using a dreadnought with a pair of heavy flamers in a drop pod but the reality is that Space Marine dreadnoughts and similar units are either a bit too expensive or fragile (pick one) for the damage they can do. We all love the idea of the battle sarcophagus but the escalation that’s taken place in the game over the last few years has left them as little more than fantastic center pieces for display boards.

Everybody’s favorite thousand year old space vampire has been looking his age lately. I’m not personally a Blood Angels guy, but there is no denying that the army has one of the most loyal followings of any in the game. Blood Angels players love their little red marines and they love Dante as the man in charge of them.  I actually feel like he might be okay were it not for the fact that his weapon of choice is an axe and therefore makes him strike last, something the game designers probably hadn’t thought about when the book was written back in 5th edition.  As it stands the ironic lack of Eternal Warrior on the oldest marine in the Imperium coupled with being forced to swing last means that you just can’t assume that the old man will live longer than 1 round in a tough combat. Maybe if he cost 50pts less. I really, really, really, wanted Ork space pirates to be good. When the book came out I spent 2 weeks telling people that these guys may be better than we think just because I wanted it so bad. They aren’t.  They don’t put out enough fire for the points and despite the fact that they are 2 wounds each they die way too easily. Why Games Workshop, why? If you were going to make a broken unit why couldn’t it have been the Ork space pirates instead of Wave Serpents, at least then we’d lose to a bunch of awesome conversions instead of the same wall of U shaped gun boats that aren’t gun boats.

So they lived through the Horus Heresy, fight side by side with the most primal fears of mankind made manifest, have millennia of brutal warfare under their near invulnerably armored belts, and somehow they are more likely to run in terror than a codex marine scout? If Chaos Marines had any kind of leadership boosting rule (let’s say stubborn) the might actually be okay, but as it stands they’ve been replaced by lowly cultists as the go to troop choice. Seriously, crazy serial killer dudes with sharpened spatulas and revolvers are actually better in this game than the Black Legion. Okay, we fixed the problems the Berserkers had. Now we’ve got a fast open topped vehicle as a transport so the unit can be there and charging on turn 2. What’s that? They’re AP 2 as well and they have some of the prettiest models in the game. This is going to be awesome! That is unless somehow the unit becomes T 3 in an AV10 vehicle and don’t have any grenades.

If I told you 4 years ago that the most abusive unit in 7thedition would be Eldar grav tanks this is the one you would have been thinking of. You also would have thought I was talking about 2018. The honest truth is that the falcon isn’t even that bad it’s just that it’s so much worse than the Wave Serpent that most of us have forgotten they exist.
This list could be much longer but most of the units I came up with all have the same problem. They are a close combat infantry unit that just gets shot to hell in a meta that is very unforgiving. Things like Harlequins, Vanguard Veterans, Sanguinary Guard, Wyches, Ogryns, and Howling Banshees all could have made the list, but If I did a write up for these units they would all read about the same (see Berserkers and Incubi). The sad reality is that in order to be good at close combat in this edition a unit has to be exceedingly fast as well as exceedingly tough, The minimum standard seems to be set somewhere around Daemon Prince territory, That’s a tough standard. What’s worse for the units on this list is that because of that escalation they are more likely than ever to be counter charged by units that they can’t really affect things like Iron Armed daemons, Imperial Knights and Wraithknights are death to these types of units. My guess is that like it or not most of these units are going to be collecting dust on our shelves until at least the next edition change, which depending on who you ask could be either 10 years from now or 10 weeks.

At this point my Incubi and I are just staying together for the children.

Did I miss your favorite ex-favorite unit?  Have you gotten any of these to work for you in a competitive setting?